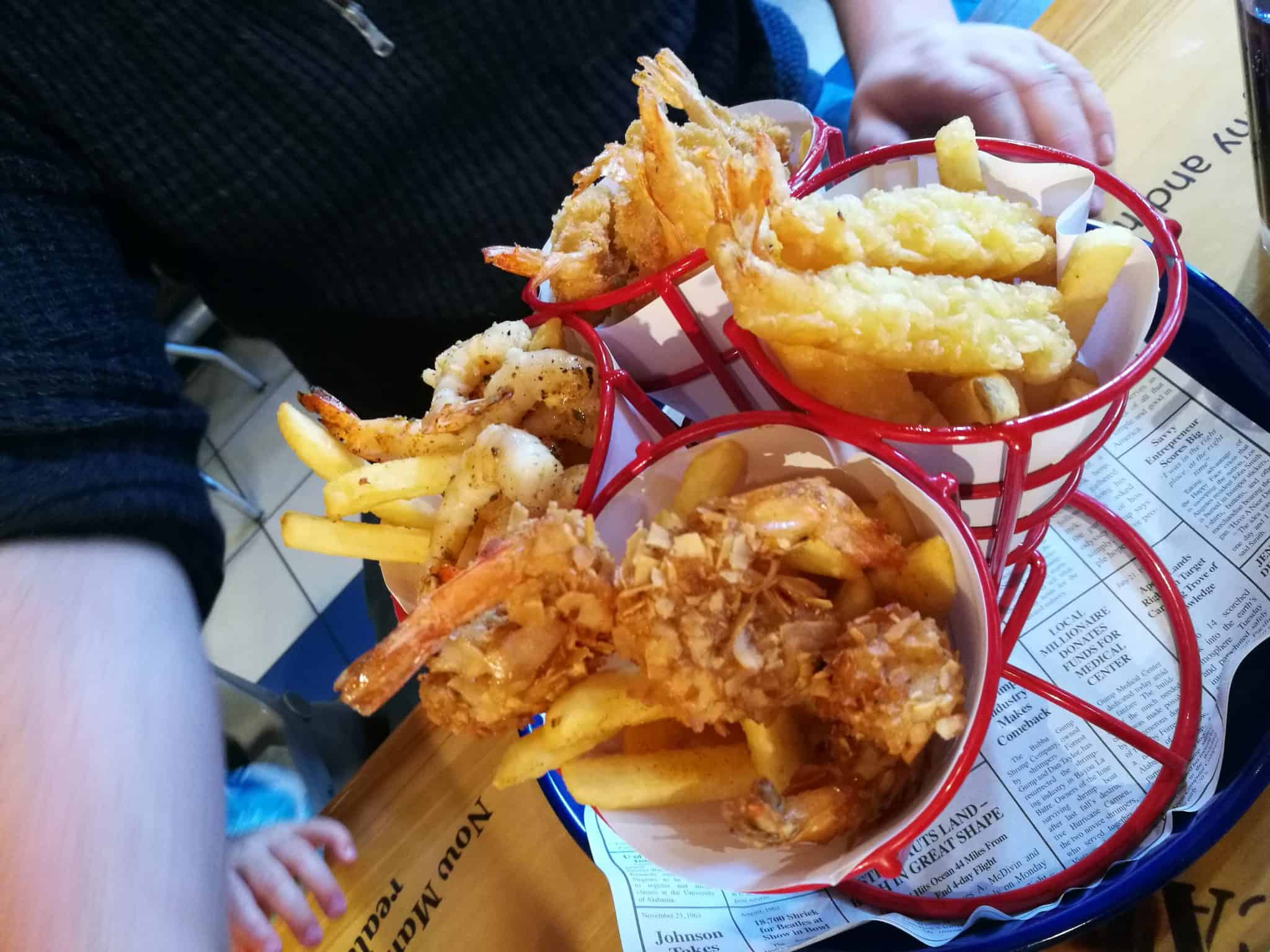 Normally when John and I go to London, especially now we have Erin, we tend to eat at the same places. We like to pick places that we know are family friendly so that there are no surprises. However, on our most recent trip to London we decided to be brave and try somewhere new; Bubba Gump Shrimp.

We arrived at about 4:15 for our table booked at 4:30 and the restaurant was pretty quiet. I guess we were quite early for a ‘normal’ dinner time but with Erin we need to eat quite early! We were shown to a table with plenty of space for Erin and close to the bar. The restaurant is actually upstairs so we left the stroller at the entrance where it was watched by staff. It really helped to have more space at the table and not have a stroller get in the way.

Our waiter explained everything we needed to know about the menu and drink and also explained something quite special to us. You know when you’re at a restaurant and you either get annoyed because the wait staff come over too often or not enough, well, that’s not an issue here! Bubba Gump Shrimp has a very unique system that stops this. On each table there is a sign that can be flipped over. One side says ‘Run Forest Run’ and the other says ‘Stop Forest Stop’. If you want someone to stop, you turn the sign to ‘Stop Forest Stop’ and the other way around if you don’t want to be bothered. I imagine this makes the staff’s jobs a lot easier as well as making it a more relaxed dining experience.

Strangely, I don’t eat a lot of sea food so ordering was super easy for me as I went with a burger. John on the other hand LOVES sea food, which is why we wanted to try Bubba Gump Shrimp. John was in heaven with the menu and it took him quite some time to decide on what to have. In the end he went with the Shrimper’s Heaven, consisting of Hand Breaded Coconut Shrimp, Chilled Peel ‘n’ Eat Shrimp, Fried Shrimp, and Japanese style Tempura Shrimp all served on a bed of Fries and dipping sauces. For Erin, I chose a classic fish and chips.

When the food arrived we were amazed! John’s main meal was MASSIVE! It was £19.50 so probably designed as a sharing meal but that didn’t stop him.

I’m quite picky when it comes to burgers and I hate any kind of slightly pink meat. This burger was cooked to perfection for me though and it was delicious. John did amazingly well with his meal. Each little basket had chips in the bottom so there was a hell of a lot of food. He very nearly finished the lot!

Erin’s meal was fantastic. It came in a little boat and had some fruit and jelly as well. Erin can be a bit funny with battered/ bread crumbed food so she didn’t eat too much of the fish. However, the fish looked lovely and white and it wasn’t at all that it wasn’t nice. Erin did eat a lot of the chips and all of the jelly though. She also loved the boat that her meal came in!

Even though we were quite full we powered through and ordered desserts. John went for the Key Lime Pie as he’d never had it before while I had the Chocolate Chip Cookie Sundae. I was not prepared for the size of it at all!

It’s safe to say that we did not manage to eat everything. My sundae was so big that both John and I gave it a go and couldn’t manage it. This is definitely one to share, especially after quite a big meal. It was so nice though so I really wish I’d been able to manage more of it.

The bar has Forest Gump playing all the time! I can imagine that would get seriously annoying if they had the sound on but luckily, they do not! I kind of wish we’d paid a little bit more attention to it though as at the end of our meal we were quizzed! It has been a long time since I last saw Forest Gump so we had to cheat a little bit. John ended up running around the restaurant to find an answer in a picture!

Bubba Gump Shrimp is definitely somewhere I’d go back to when we’re in London again. The staff were great with Erin and so friendly and fun. Our food was delicious and we honestly couldn’t fault any of it, apart from maybe there was too much for us to finish! John said the Shrimper’s Heaven was absolutely amazing while I’d go back just for that sundae!