Harry Potter, one of the best selling book series ever written. 13 years after the release of the first book in the series, the Wizarding World of Harry Potter is still as popular as ever and with that comes theme parks, walking tours, a look at the sets at the Warner Bros. Studio Tour and of course, countless options for merchandise. My whole family are Potterheads and I don’t think one Christmas goes by without someone getting something Harry Potter related. If you know someone similar, maybe they would like one of these awesome Harry Potter related products for Christmas this year. 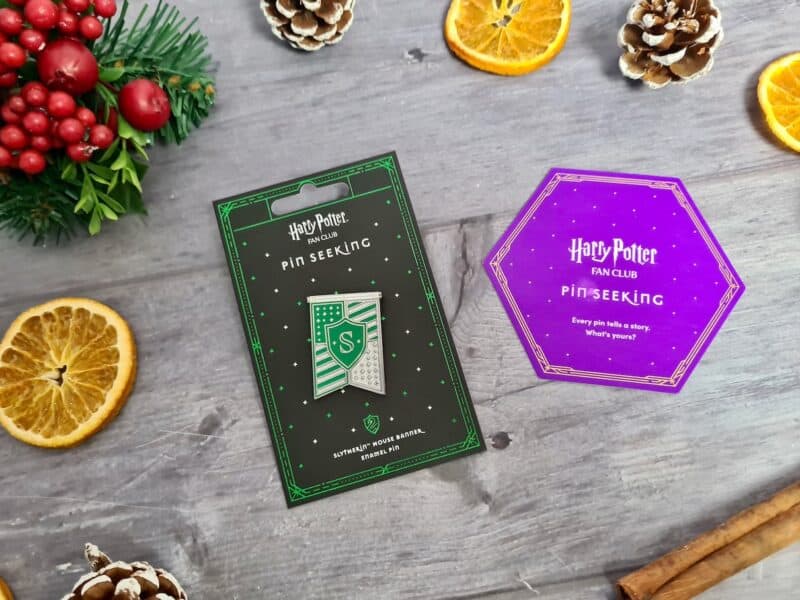 Straight from the Wizarding World, the Harry Potter Fan Club have released a beautiful range of collectable enamel pin badges. Each house has specific pins such as the banner, scarf and crest, all in house colours of course! There are 6 pins to collect per house and I love the start I’ve got with the Slytherin House Banner. You can also join the Harry Potter Fan Club Gold Membership for £59.99 per year where you can get up to 20% off merchandise and early access to buy collectibles, just to name a few benefits. 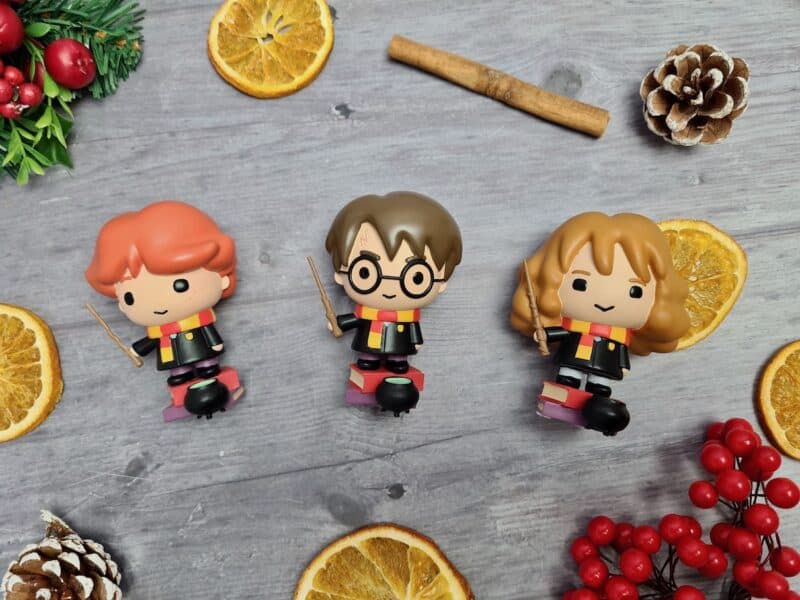 Interpreted in the popular Japanese “chibi” art style, the Harry Potter Charms collection is sure to be a big hit with any fan. To start off a collection, the Harry, Ron and Hermione figurines would be fantastic choices (all from series 1). At 8cm high, these figurines are a great size for bookshelves or collectors cases and at £12.99 they won’t break the bank either! 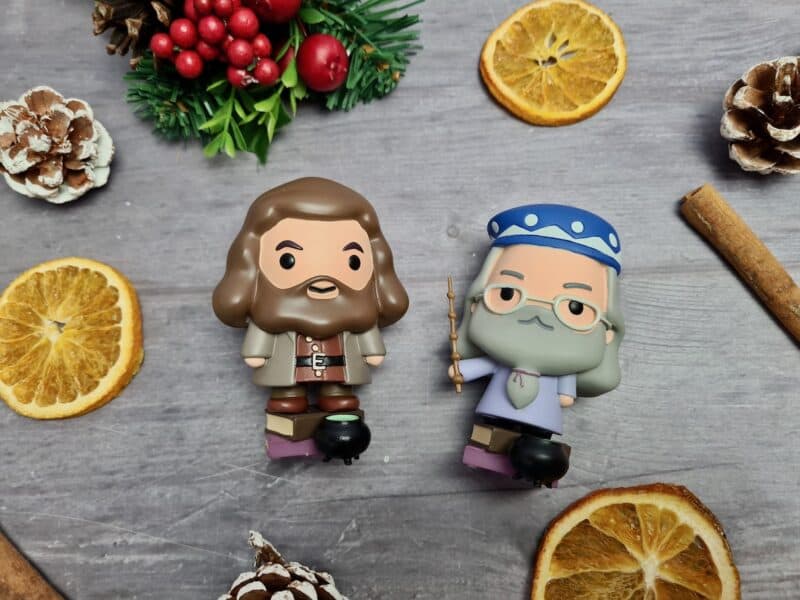 Maybe you’re looking to extend someone’s collection and get them some characters they don’t already have. The Harry Potter Charms collections 2, 3 and 4 offer characters such as Dumbledore and Hagrid as well as Buckbeak and Luna, just to name a few! I really love that you can add to a collection easily depending on what someone already has. If you’re looking for a bigger present to buy, maybe the whole set could be an idea. 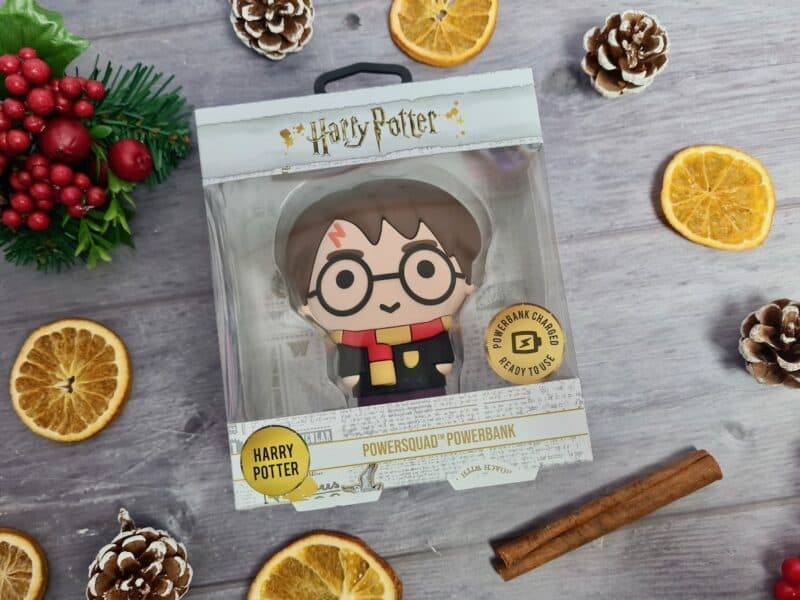 Even though phones and tablets have come a really long way from what they used to be, they also use up a whole lot more battery. If I go out for the day I know my phone won’t last so the  is a great thing to take out with me. Not only is it super cute but it can also charge most smartphones from being completely flat. 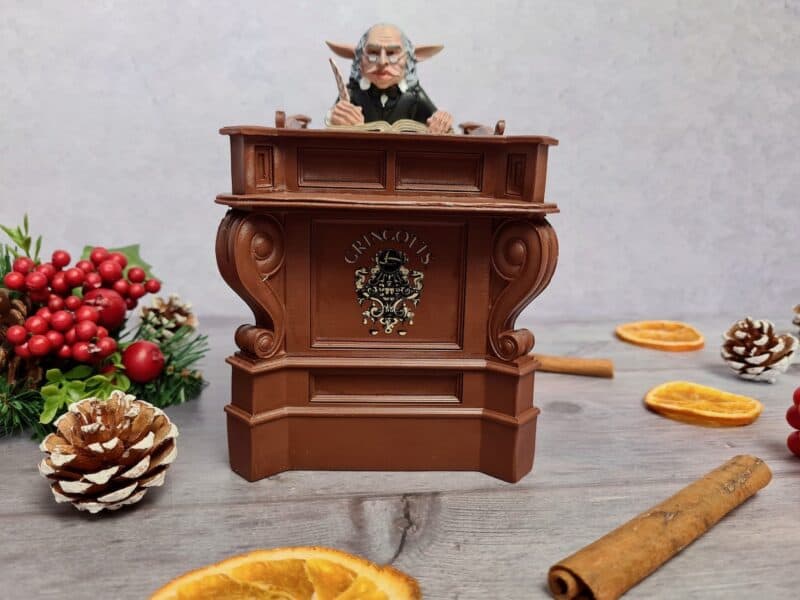 Know someone that needs somewhere to store their gold coins? Of course you do! The Gringotts Goblin Money Bank stands at 18cm tall and features a goblin checking numbers in his book. Maybe money saved up inside could go towards a Harry Potter themed trip of some kind. 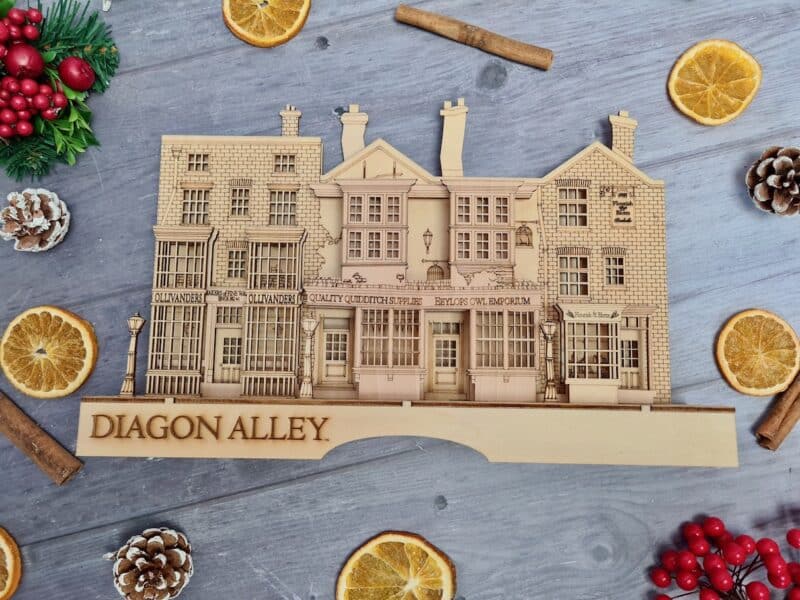 My sister is one of the biggest Harry Potter fans I know and loves anything that might look nice in her house. As soon as I saw the Diagon Alley Lit Centrepiece I knew it would be something she’d like. The multilayered design has some lovely details and it really looks beautiful when it’s lit up. 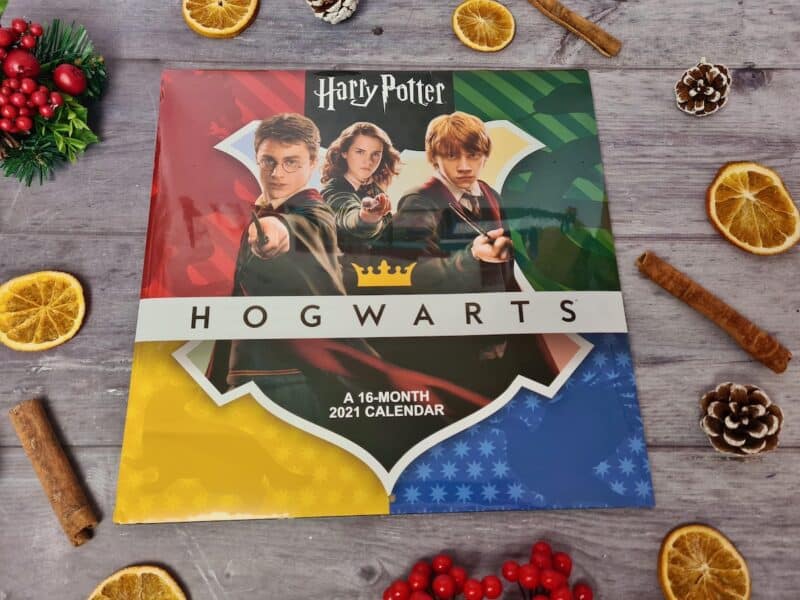 The Harry Potter 2021 wall calendar is a must for any Harry Potter film fan as it has loads of fantastic images from the films for each month. Also, the calendar has lots of space for all of your important dates, as well as showing special birthdays for characters such as Hermione and Hagrid. 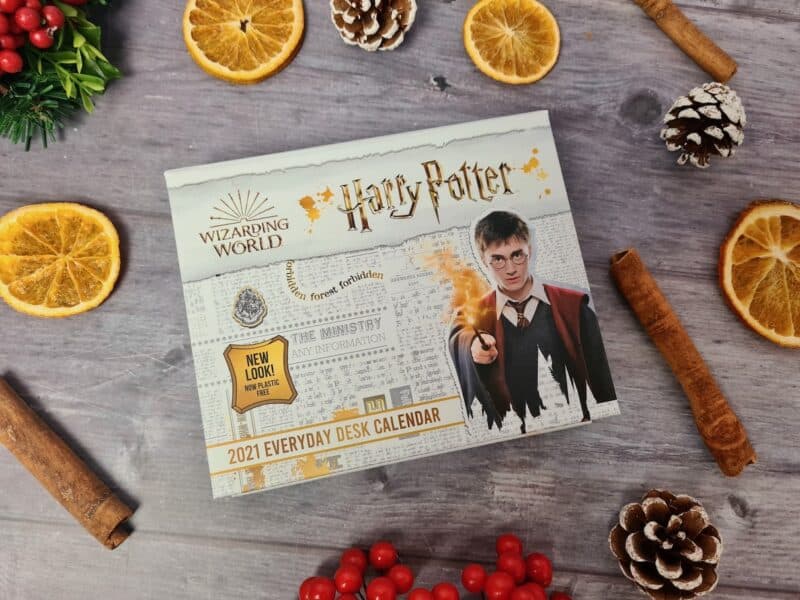 A lot of people are working from home now and sadly don’t have some of the resources that the might have had at the office. Danilo’s Harry Potter desk block calendar has loads of fantastic images from the Harry Potter films as well as film quotes and trivia about the films. 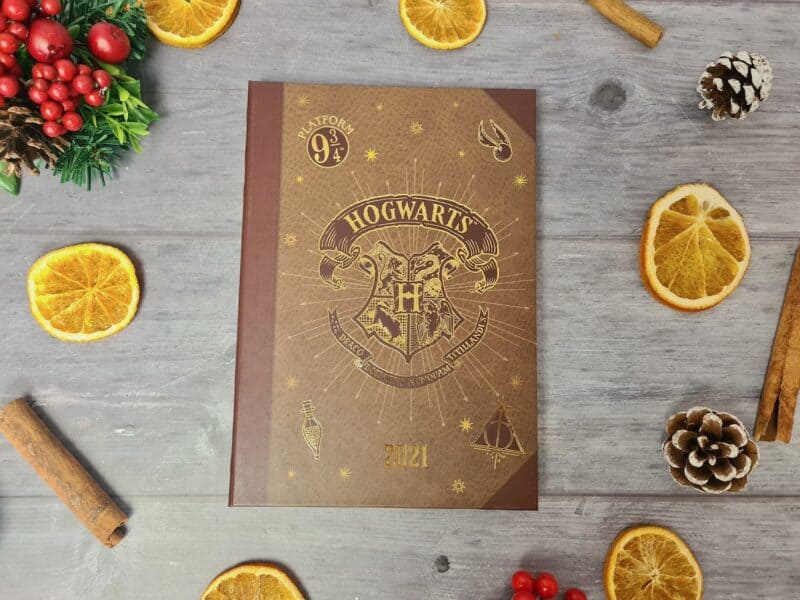 I don’t cope very well without having everything written down and to be honest, I would forget what was going on from one day to the next if I didn’t have a diary. The Harry Potter A5 diary from Danilo will definitely help to keep someone organised for 2021. 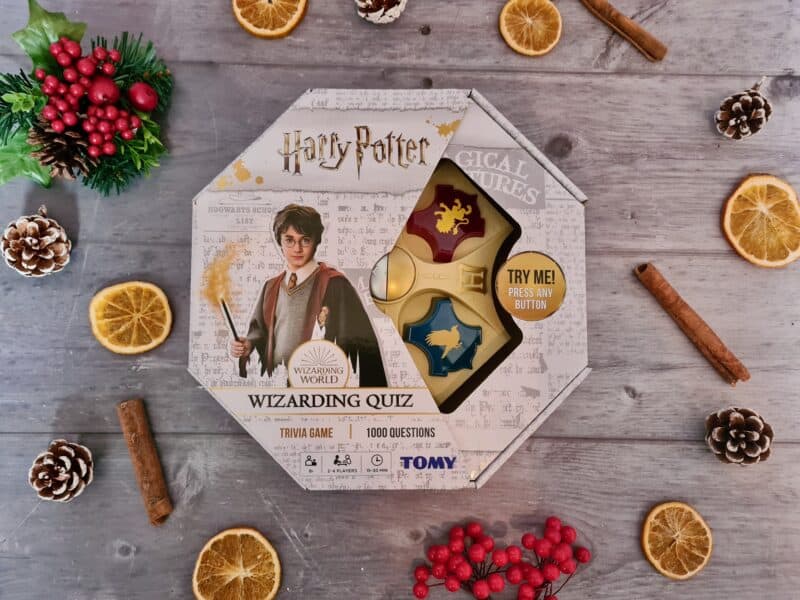 Something for the whole family is the Harry Potter Electronic Wizarding Quiz game*. You can choose your house and level of the game and answer true or false questions about Harry Potter. If you answer a question right you get 10 points but if you get it wrong, the house loses 20 points! There are 1000 questions so you won’t run out any time soon! 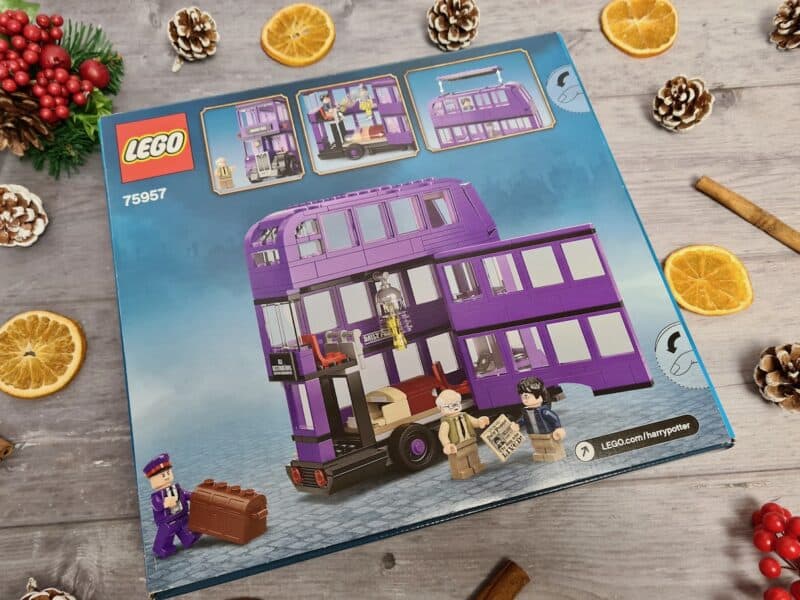 Something that is great for both adults and children, or for a present for the family is Harry Potter Lego. There are so many different sets available, for various prices, and you can also get sets from Fantastic Beasts*! Two of my personal favourites are the Harry Potter Hedwig the Owl Figure* or the LEGO Harry Potter Knight Bus*. 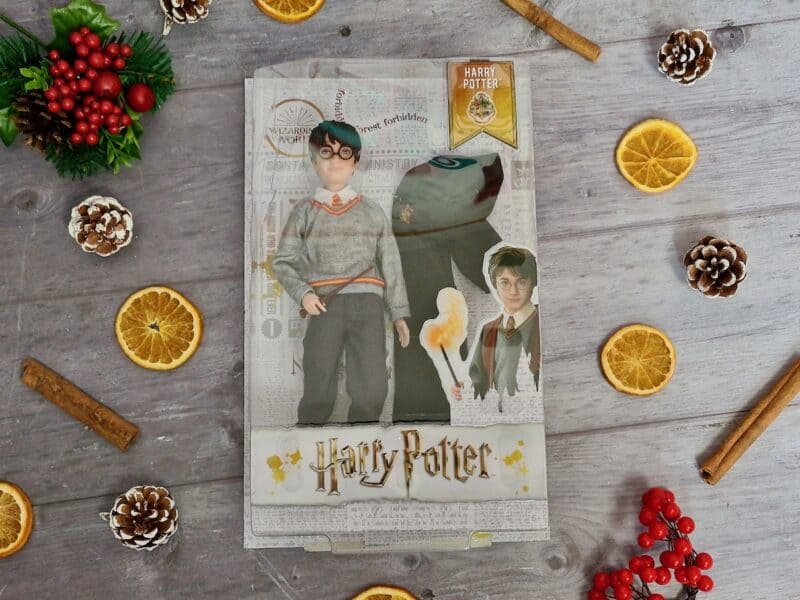 The Harry Potter doll*, who comes dressed in the Hogwarts uniform, a Gryffindor robe and a wand! Harry’s arms and legs move so you can pose him in loads of different ways, maybe setting up and creating scenes if you have some of the other characters available. 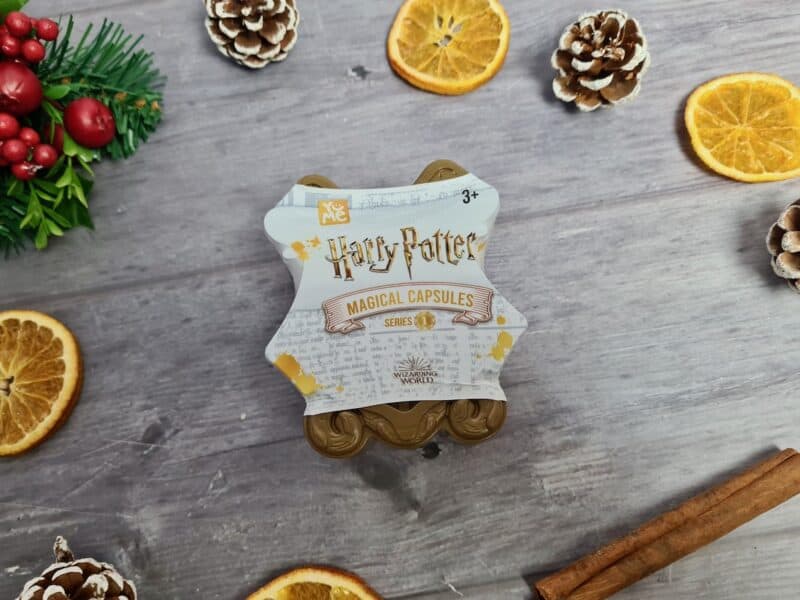 Earlier this year Erin got to try out the Harry Potter Magic Capsules and loved them so much. Think Harry Potter themed blind bags but even cooler! You can collect different characters, each of which comes with accessories and a spell, as well as other cool things. I think adults would like these just as much as children.

Are you a Potterhead? Which of these items would you like the most, or, what would you buy for someone? You can also find more Harry Potter gift inspiration on the Mudpie Fridays website. 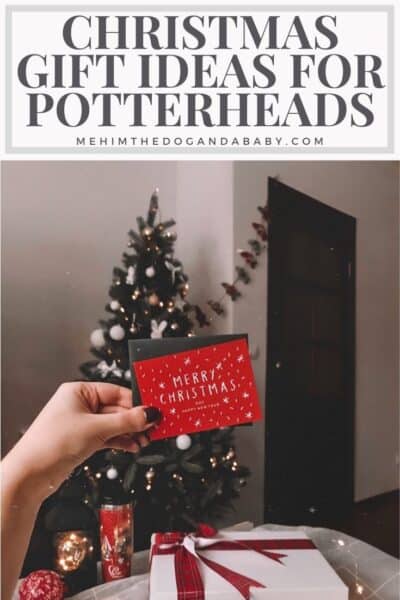 When it comes to holidays we try to make sure Erin

AD | Press tickets We’re so lucky to have so ma

AD | Press tickets A few weeks ago we visited @se

AD | Press tickets Although I have lived in Norfo

AD | PR item Sometimes children can get bored of

I am officially on countdown to the summer holiday

AD | It’s the start of the summer holidays and i