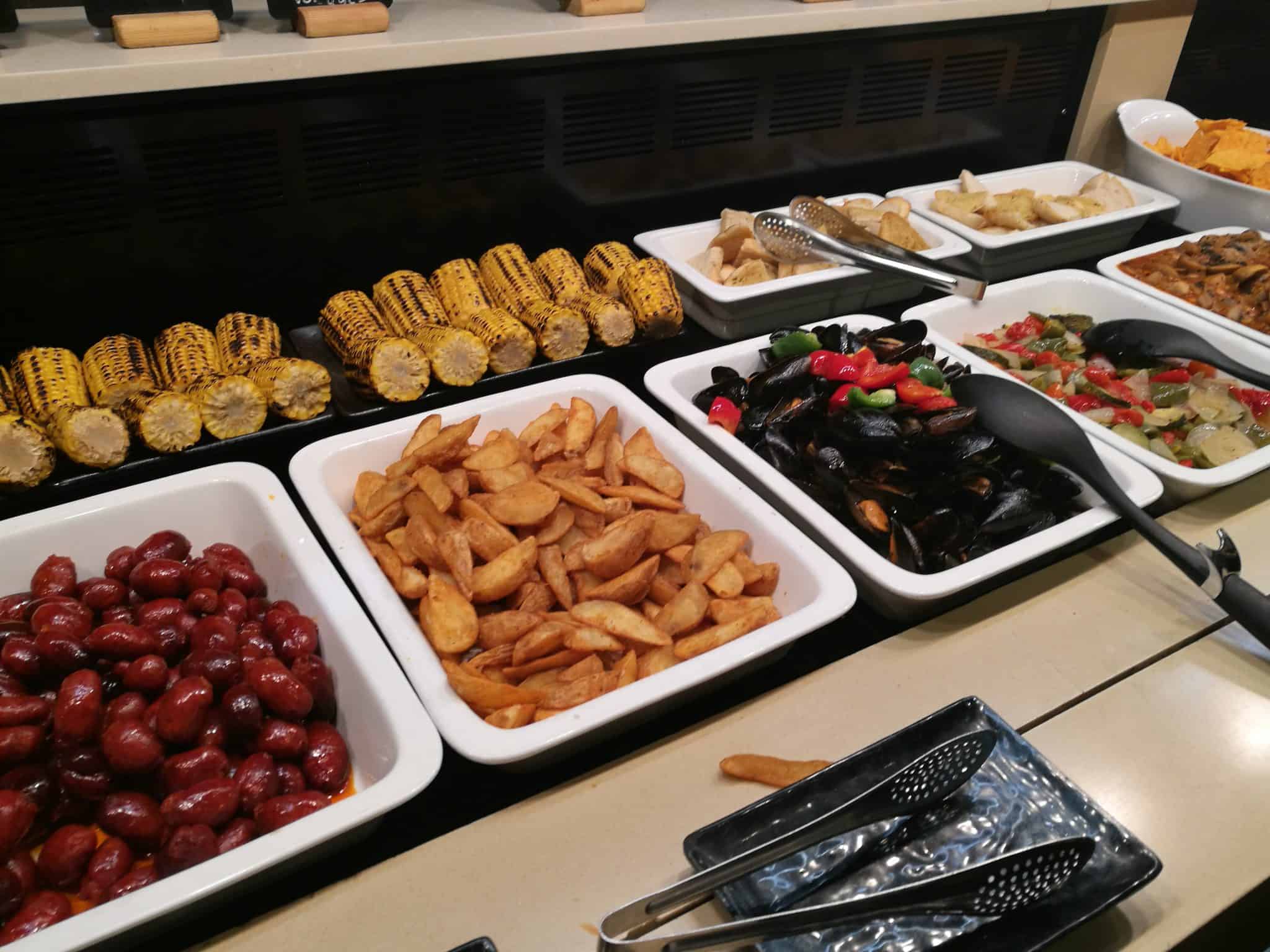 When I lived in Nottingham while I was at university one of my favourite places to eat was a buffet restaurant called Peachy Keens. It was an all you can eat ‘everything’ kind of place and since moving away, I’ve missed it. I was so excited when I found out a Cosmo Authentic World Kitchen was opening in Norwich as it’s a very similar thing.

Me, John and Erin all headed into Norwich for the day for my birthday last month and headed to Cosmo for when it opened at midday. It was a Sunday and I don’t think I was prepared for the queue down the street when we arrived at 11:40. Once open though the wait wasn’t too long. I do wish we had booked though to make it even quicker.

While we waited for our table, we were asked to leave the pushchair downstairs. Yes, the restaurant is up a set of escalators with a lift available if needed. While I didn’t mind too much, Erin was getting tired and I had to keep my fingers crossed for her getting though lunch.

We got seated at the end of a row of tables which was perfect for us as it meant being able to get in and out easily and there was loads of space for the high chair. I could see why we were asked to leave the pushchair downstairs though. They have maximised how many tables are in there and there really isn’t much spare space.

What is available in regards to the food really depends on when you go. During weekday lunches there is less of a choice but it is also half the price (See bottom of this post for prices). We went on a Sunday lunch where everything was available.

As you can expect from the name of the restaurant, there is food from all over the world available; Italian, Asian, carvery, desserts just to name a few. We were really spoiled for choice. John started with sushi while I started with a roast dinner. It was Sunday after all.

Erin had a bit of a mix of food but she didn’t really eat a lot to be honest. Luckily, her meal was only £3 because of her age. She was super tired at the time so wasn’t too bothered about eating, well, until I got her some cake. Then she ended up having cake with noodles all mixed together. Yum!

John and I were both really impressed with the food. Each time we went to get another plate of food we could see things being filled up again. It was great to see how often fresh food was being brought out. I think we both managed 4 plates of food before having a couple of desserts. That was maybe 1 plate too many really.

The desserts were fantastic and there was such a large selection to choose from. I was in dessert heaven really and had way more than I probably should have. I loved that there was something for everyone; ice cream, warm puddings, fruit, a chocolate fountain and loads of different cakes!

Overall, I thoroughly enjoyed the food at Cosmo, Norwich. If anything let it down it would maybe be the baby changing facilities. It’s not that they were bad or dirty or anything but the lack of options. Cosmo is a really large restaurant but there is only 1 baby changing facility which is in the disabled toilet. When we needed to change Erin there was quite a queue of other parents waiting. However, as things go, it’s not the worst problem in the world!