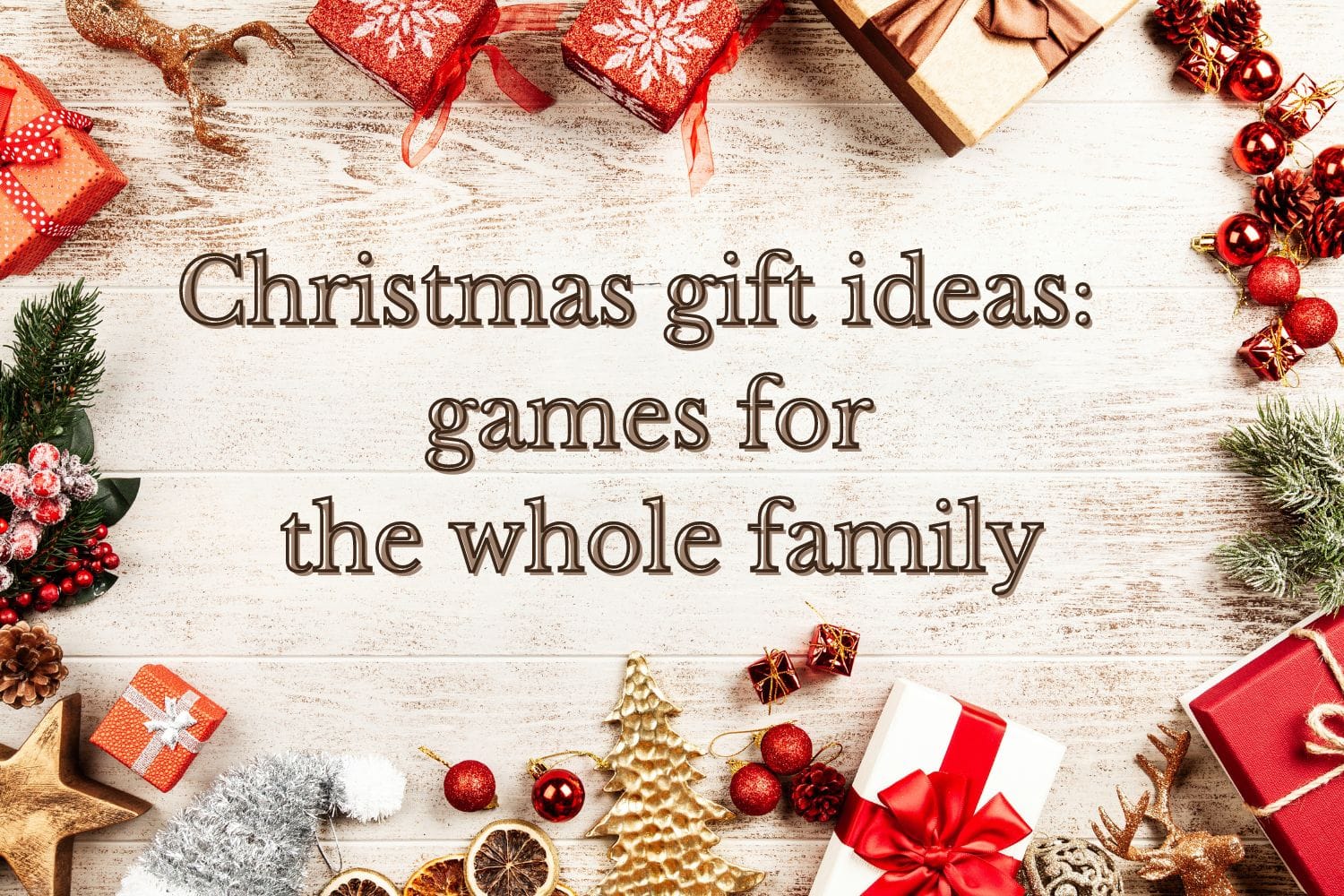 Christmas is a great time to get the family together to play some games. There are so many games available now, from board games to card games. This post has ideas for all ages!

Draw a fish. Connect four dots in the correct order. Pour water from one cup into another.

Not when you are wearing the upside-down goggles! Even the simplest of tasks become challenging. 32 playing cards offer 120 different drawing and action tasks that will have you and your friends and family in fits of laughter.

Enter to win The Upside Down Challenge Game at the end of this post!

You’ve told us that you love LOGO: the Picture cards, the clever Theme cards and the trivia questions that only need everyday knowledge, SO, hey presto Say hello to LINK LOGO: On each LINK LOGO card there are SIX PICTURES tied together with ONE LINK. Your challenge is to work out that LINK. . Just look at the pictures and say what you see and with a little luck, the LINK will pop into your head. BUT the fun doesn’t stop there because then you have FOUR questions relating to the Pictures AND four questions relating to the LINK.

Bring everyone together with LINK LOGO – get thinking about linking.

Puzzles can be a great idea, either for one person, or as a family to do together. Bellica has some wonderful aircraft themed puzzles, available from www.zeeproductions.co.uk. This would be an idea gift for someone who loves aircrafts or maybe just wants a bit of a different puzzle!

All those brave enough to accept the King’s challenge, throw the dice to make their way over to the castle. It is here where the first treasure card is revealed and the hunt begins. Each time a treasure is found, a new card is revealed, until all the King’s treasures have been found. The player who has collected the most treasures, is the winner. Enchanted Forest is a fun and clever game of memory and strategy. Families with children aged 4 and up will love hunting the forest for the hidden treasures.

THREE ways to play, starting with classic EYE SPY, each player must try to quickly spot and dig out six figures shown on their game card. The first to complete their card WINS. In GAMES TWO and THREE, players race to spot figures either starting with a random letter (things starting with R), or with a common theme (things that eat food) from the 128 pieces on the table. First to find their items WINS.

Dig In from Drummond Park

It’s Rumble in the Jungle, the craziest action game that’s full of hidden dangers. Line up your explorer playing pieces on the game board, ready for the off. Land on a crank space and turn the giant Wheel of Doom, setting off a giant chain reaction. Landing on the spaces will send explorers this way and that, cranking the wheel and setting off more mayhem that will stop others in their tracks and send them back to the start. First to send the Golden monkey statue flying through its roof wins the game.

Rumble in the Jungle from TOMY

Dobble is a speedy observation game where players race to match the identical symbol between cards. Every card is unique and has only one symbol in common with any other in the deck. The match can be difficult to spot as the size and positioning of the symbols can vary on each card. Reliant on a sharp eye and quick reflexes, Dobble creates excitement for children and adults alike while keeping every player involved in the action.

In this edge-of-your-seat party game you race to place your cones on letter discs whilst calling out examples to teasing topics. But beware, any other player can Top It with another answer and place their cone on top of yours! Only the last cone counts and bags all the points!

Top It from Cheatwell Games

Pear-shaped is the fast and frantic pair-making, pear-grabbing card game that gets out of hand very quickly! Players aim to get rid of all their pear-shaped cards by matching pairs of pear-shaped objects, numbers and colours before the pear timer stops rocking!

A simple quiz with a quick thinking twist.

From shouting out answers backwards to swapping letters around or just making it up – mental acrobats are required all around.

Play again and again with 500 questions and over 2000 answers.

So Wrong it’s Right from Asmodee

Deface Race is the fast-scribbling challenge that’s superb at bringing out the secret graffiti artist in you. Players split into two teams. On your turn as the artist, choose a picture card for everyone to see and glimpse at the three secret options on the next character card. Flip over the timer and start scribbling over the picture card with the dry-wipe pen.

The Sock Game is the perfect addition to your family game night! In this speedy sensory game, each team has a large fluffy sock filled with thirty different items. One player turns the spinner on the board – once the arrow lands on an object, it’s a frantic race to find that object!

The first player to find their object wins a point!

You can customise your Sock Game experience by adding objects from around your home and writing them on the blanks spaces provided on the spinner. It’s fun for kids and adults alike!

The Sock Game can be played with two players or two teams. Work together with your team as you share the laughter and excitement!

The Sock Game from Asmodee

Bunch of Butts is the cheeky, shouty out card game – and it’s butt loads of fun!

Find matching butts, shout them out and collect the cards, but watch out for the ‘Silent Butt Deadly’ card. Flip them over so the letters ‘BUN’ ‘CH’ ‘OF’ ‘BU’ ‘TS’ are showing, shout it out first and you’ve won. Oh, and did we mention the spank card? Pull this from the deck and it’s a race against all the other players to slap the squishy butt.

Bunch of Butts from camdengames.com

Get out of the moving maze Your problem: the opponent sets barriers to slow you down. Please be aware that it should leave you at least one free passage. But who will have the shortest way? A captivating and truly funny game accessible for everyone. Players share the barriers and each one sets their own peg in the centre of their starting line. In turns each one moves their own peg from a box, or sets a barrier to slow down the opponent. The pegs must bypass the barriers, which create a maze that you need to get out very quickly, because the first that reaches the opposite line of its starting line wins.

Although the weather might not be quite right in the middle of winter, a Badminton racket and net set from Badminton HQ is something that all the family can use. Once you’ve got it up in the garden you can have hours of fun. It’s also a great way to get the family outdoors and do something, not on a screen.

Win The Upside Down Challenge Game

Win The Upside Down Challenge Game