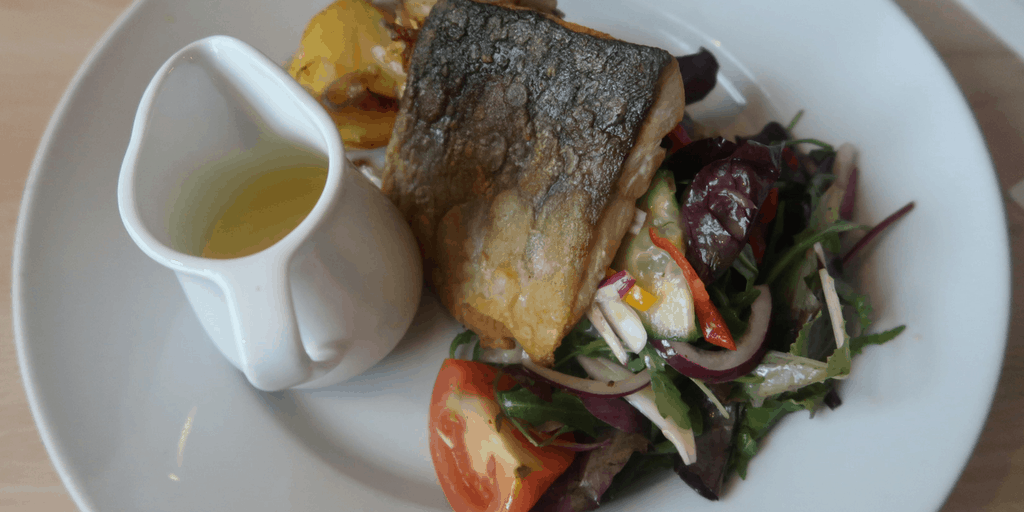 The night before we flew out to Majorca from Stansted Airport we had a night’s stay at the Holiday Inn Express London – Stansted Airport Hotel. We arrived at around 1:30pm, a little earlier than planned as we’d had enough of being in central London.

Not all Holiday Inn Express hotels have restaurants but I think it’s quite important for an airport hotel to have somewhere for people to eat a decent meal if they’ve been travelling a long time. The restaurant isn’t open all day though so you can only get evening meals from 6pm. This was a little late for Erin but she was fantastic really and only had a little whinge which was quickly solved by her favourite YouTube video on John’s phone!

The restaurant was pretty quiet when we visited so we got our pick of where to sit. Erin wanted to sit at the largest table there was but luckily, John managed to talk her into a smaller booth where she could sit at the end in a high chair. The restaurant has really lovely large windows so it was nice for it to be so light and airy instead of stuffy and dark as some can be. When it came to looking at the menu I was surprised there was so much choice! 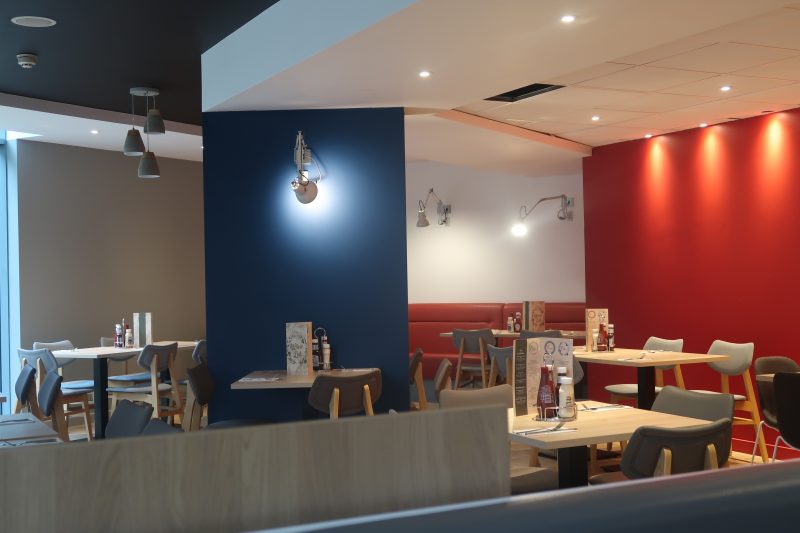 The restaurant has a whole side of the menu dedicated to their Rotisserie chicken options. I love properly cooked chicken and I couldn’t wait to try some. I chose the a half chicken which came with fries and a salad. My chicken was absolutely delicious and I could have eaten more! The breast was so moist and cooked to perfection. Teamed with fries and some gravy, this is a really good choice if you fancy something comforting and filling! 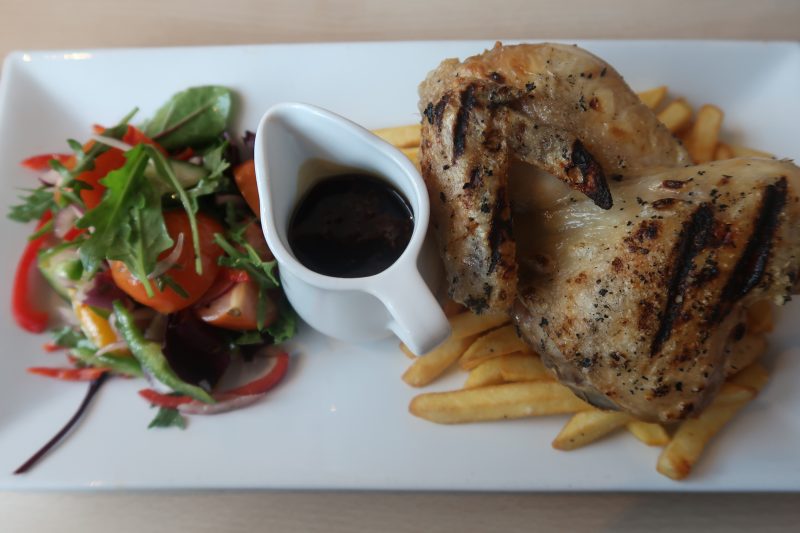 John loves fish so he was really happy to see salmon on the menu. This was a really easy choice for him to make and he wasn’t disappointed. The salmon came with new potatoes and salad. I’m not sure what kind of dressing came on the salad but John was really impressed with how fresh and delicious it was. 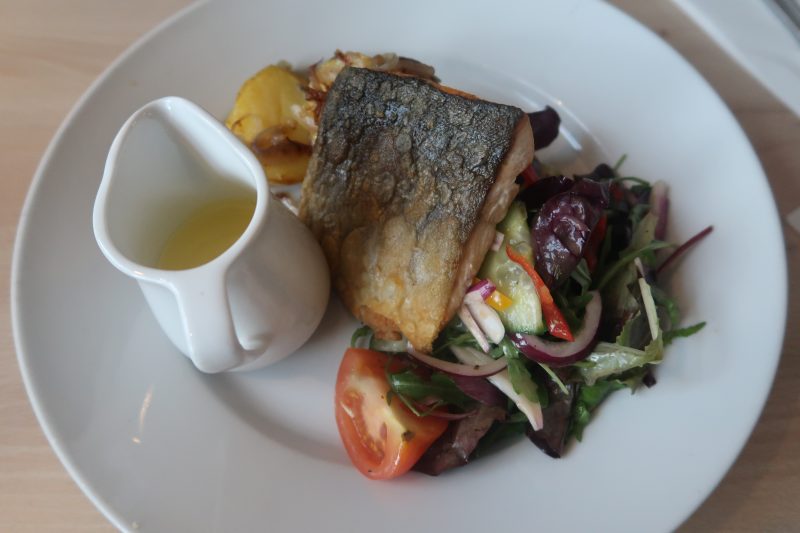 The children’s menu was also great. I chose pizza for Erin as she seemed quite excited about it when I mentioned it a bit earlier in the day. Instead of wanting to eat the smaller pieces we’d cut up for her she decided to attack the larger bits with a fork an as you can see, she had a lot of fun eating it… and getting it all over herself! 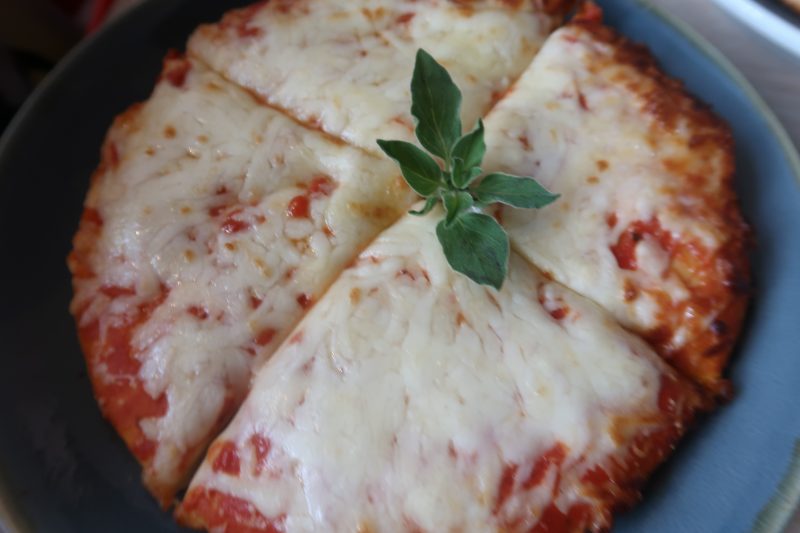 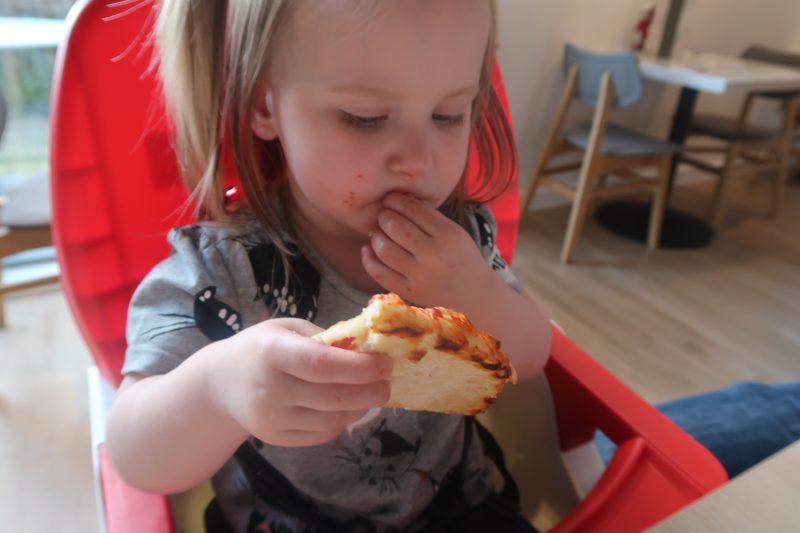 The restaurant menu isn’t huge but there is plenty of choice and surely something for everyone. John and I found it really easy to pick something for ourselves and also for Erin, who is a bit of a nightmare to take out for dinner sometimes. You can see the menus below: 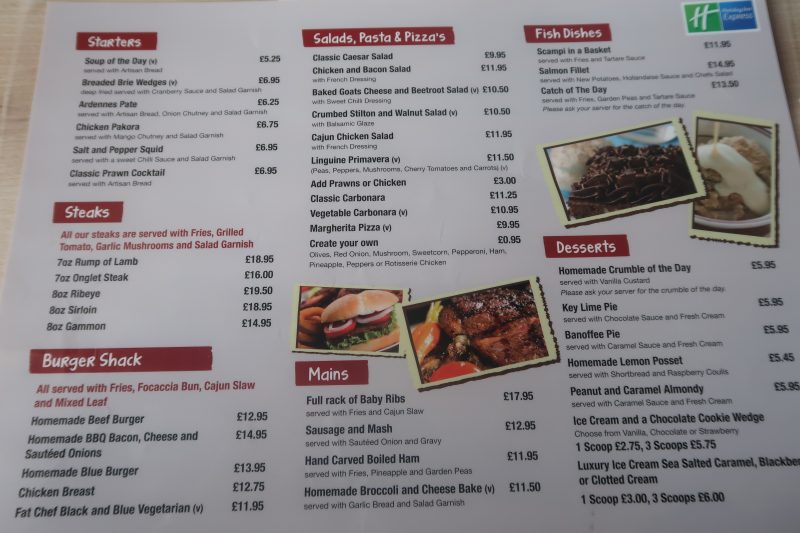 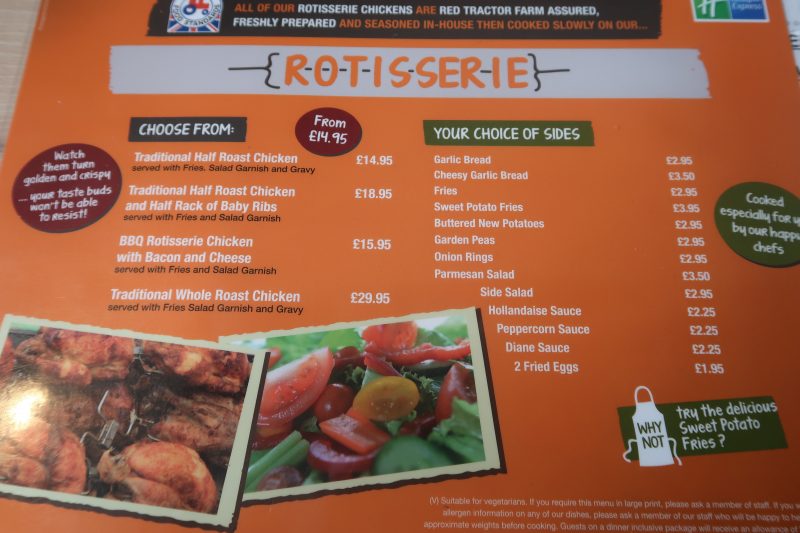 Breakfast at the Holiday Inn Express London – Stansted Airport Hotel starts super early at 4am. Obviously, being an airport hotel people are up and about a lot earlier than normal and sometimes you have to be at the airport quite early. We had to be there at 7am at the very latest so this meant us having to get up early and also make sure we ate something before heading off. Between 4-6am only cold options are served for breakfast but after 6am there are hot food options as well. We ate breakfast at about 5:30 so unfortunately we didn’t get to try any of the hot food options. 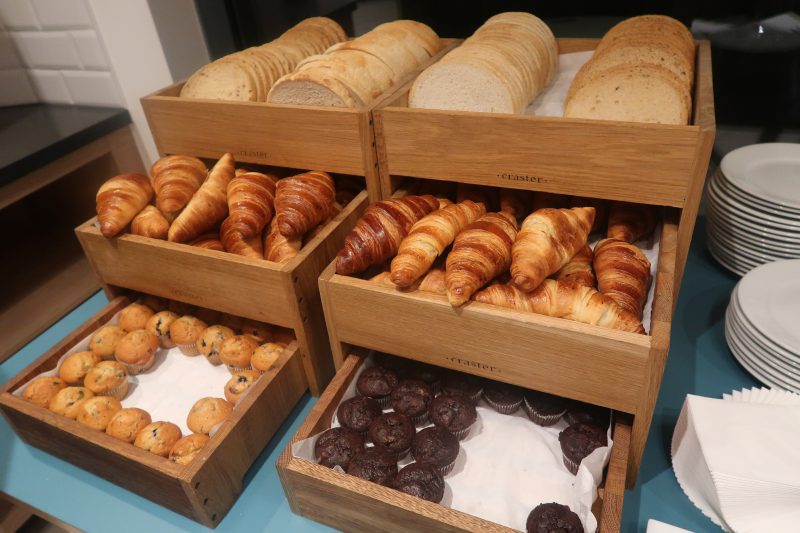 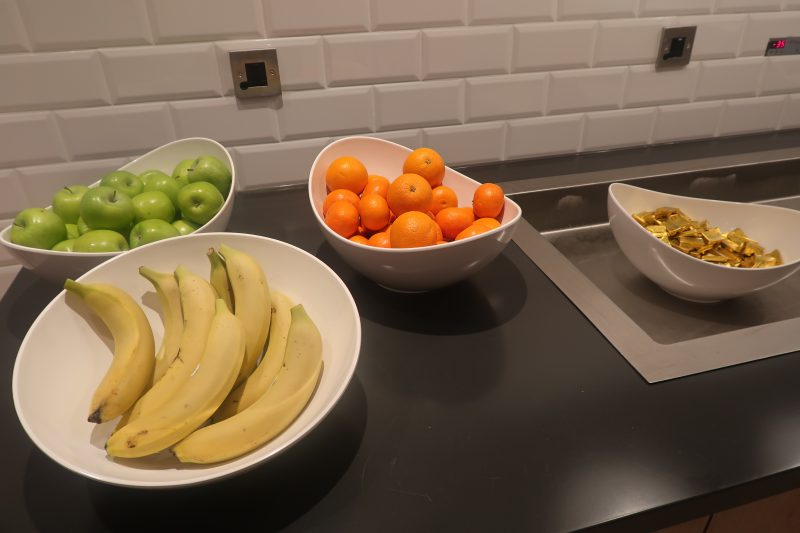 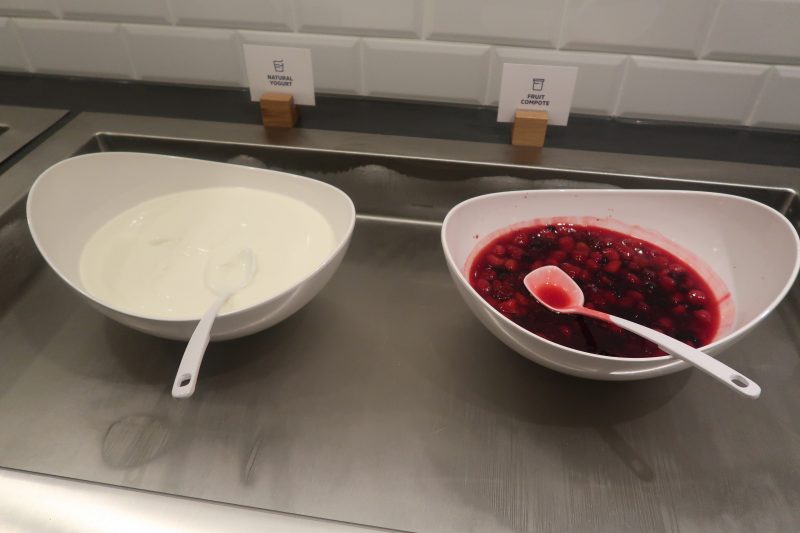 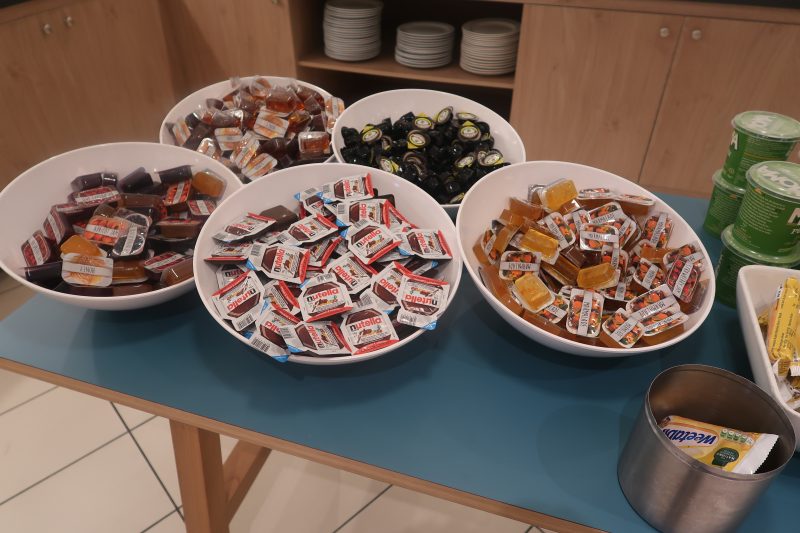 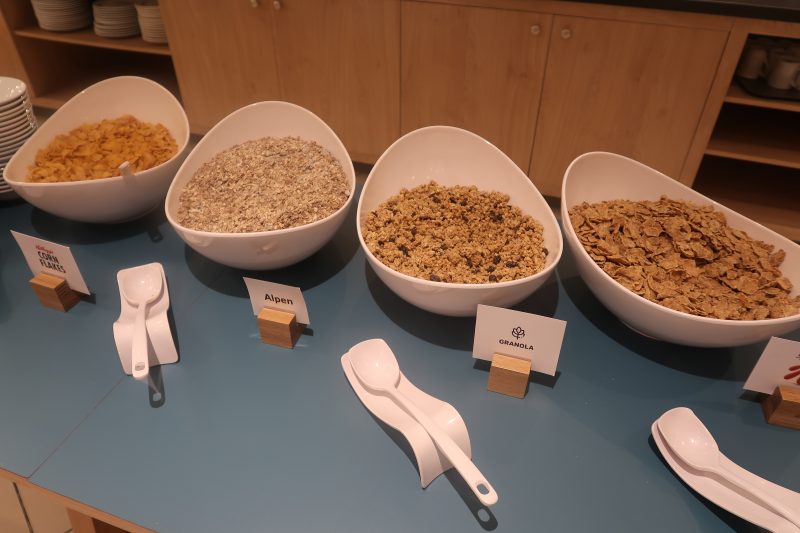 Even though we didn’t have the option of hot food for breakfast we still had a lot of choice as you can see above. Not only was both John and I happy with what we had to choose from but Erin was also impressed. Clearly, buttering toast with a spoon isn’t going to work very well but she tried and she really enjoyed tucking into her food even thought it was really quite early for her. 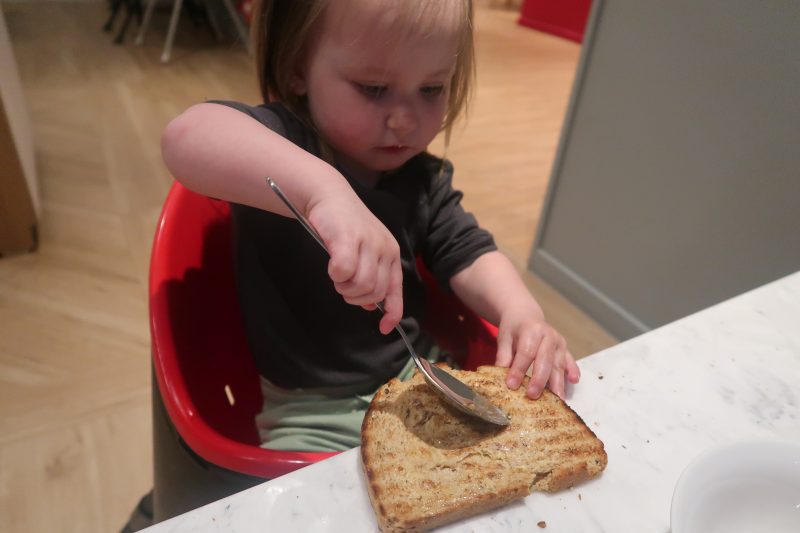 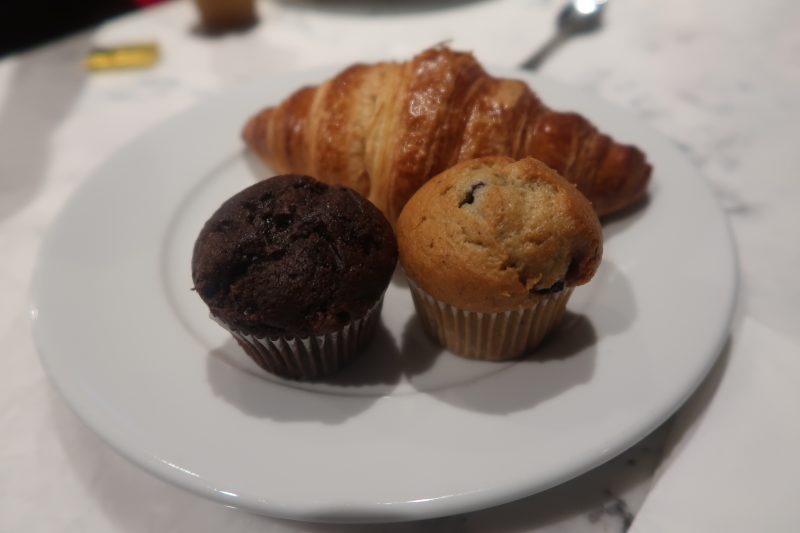 Overall, we were really impressed with the standard of food at this Holiday Inn Express. Dinner was delicious and there was something for everyone, even picky children like Erin, and breakfast was exactly what we needed first thing in the morning!

Holiday Inn have clearly thought about their guests needs. Even though dinner is only available form 6pm it’s great that the option is there to begin with and the super early breakfast is perfect for those with early flights.

Disclaimer: We received a complimentary meal at the hotel’s restaurant and breakfast was included in our stay. All opinions are our own. 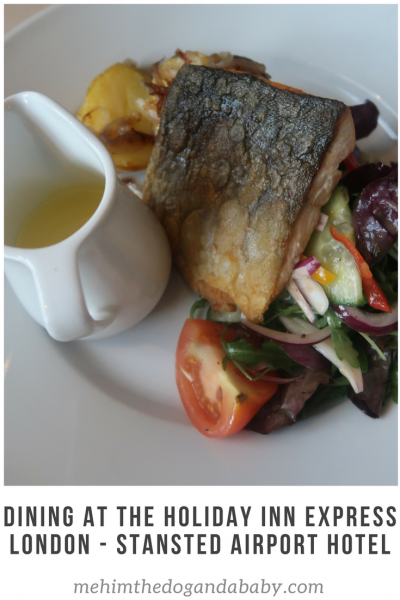