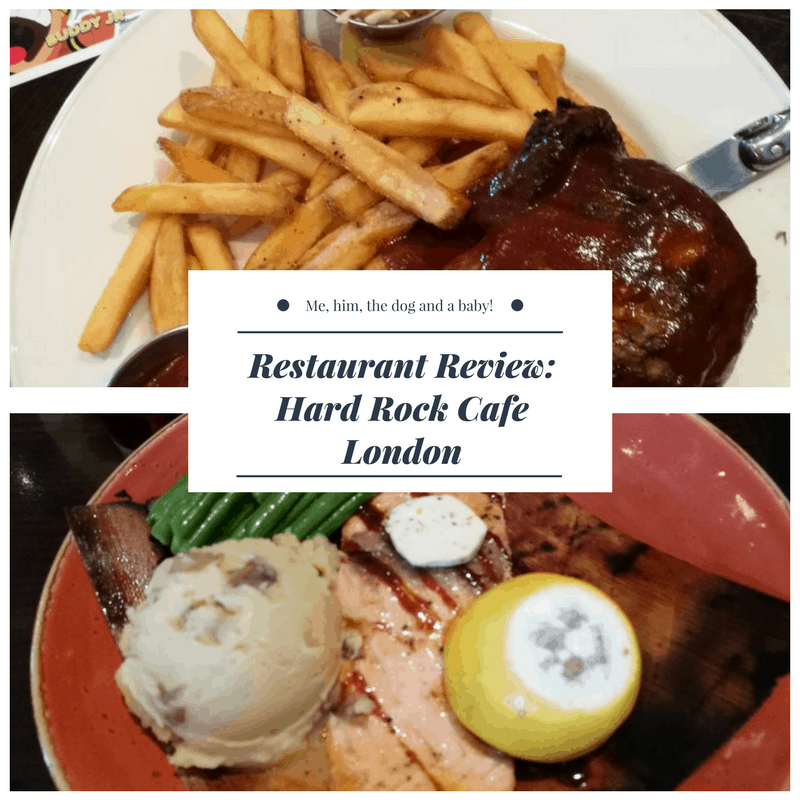 Having been to a couple of other Hard Rock Cafe restaurants elsewhere (Rome and Orlando) John and I thought it was a bit strange that we’d never been to Hard Rock Cafe London. We were in London a couple of weeks ago so we had the perfect opportunity!

We arrived at close to 12pm when we thought the restaurant would be packed. Although it was  getting busy there wasn’t a wait for a table and we had plenty of choice of where we could sit. We were seated quite close to the toilet and baby changing which was perfect as we had Erin with us. Our waitress soon came over and introduced herself, dancing at the same time. Laura was fantastic and so bubby! She took an instant shine to Erin, who loved the attention!

Hard Rock Cafe London has a fantastic menu. There was so much choice and really, there is something for everyone! Usually when we go somewhere like this I’m really boring and always have a burger. John and I both decided to choose something different though. I went for the BBQ chicken while John had salmon.

While we were waiting for our food Erin was kept busy with crayons, a colouring sheet and lots of straws. Once she’d realised that she could put a straw in the lid for her apple juice she wanted more. Laura was fantastic and brought her a load of straws to play with. She certainly knew how to keep the kids happy and it was so nice to see someone take the time and the effort with a 15 month old. Erin hasn’t received this kind of service anywhere else!

We were pretty amazed when our food arrived. The portion sizes were much bigger than what we were expecting. There was a lot of food but it was super fresh, hot and delicious!

Erin was in a bit of a strange mood for lunch. We ordered her pizza and chips but I honestly wasn’t very optimistic about her eating it. She’s been having a bit of a fussy time recently and didn’t eat much at all. This wasn’t the fault of the restaurant though as her food looked great. Her pizza and chips came out on a plastic guitar with some ketchup in the middle. Once Erin discovered ketchup the game was over! She scooped it up on her finger and licked it off. At least she enjoyed some of her lunch!

Although we were getting pretty full from our mains, we were determined to have dessert. I couldn’t resist the Oreo cheesecake while John had a chocolate brownie with ice cream. At first we thought the desserts were quite expensive, at around £8 each. However, when they came out I could see why. They were both massive! Needless to say, neither of is could finish them. The problem was, we both wanted something different otherwise we might have shared!

After our meal we headed over to the shop. I have a Hard Rock t-shirt from each of the other restaurants we have been to and I wasn’t about to let this be an exception. I also wanted to get Erin her very first t-shirt to start her collection!

Our visit to Hard Rock Cafe London is most definitely my favourite so far. The service is what makes a restaurant so special and we couldn’t have gotten any better than with Laura. The attention she gave Erin, the attention she gave us and her high and fun energy was amazing. Next time we go, I’d want to be sat in her section again!

Disclaimer: We received discounted meals & merchandise for the purpose of this review. All opinions are our own.