I never like to stay in the same place twice when we go to London. I don’t know why. I guess it would make sense to stick with a hotel if we really like it but I like to stay in different areas where possible and discover something new. On our last trip we stayed in the Premier Inn London City which is in the Tower Hill area of London.

Premier Inn London City is about a 20 minute walk from London Liverpool Street if you fancy walking but it’s also only 2 stops away on the tube. I made poor John walk there as we arrived in London because I thought it would be easier but we had a massive, heavy bag with us and he struggled. Poor John!!

Unfortunately, the hotel is a bit tricky to find. Google Maps says the hotel is on Chamber Street, when it isn’t, so we were led wrong a few times! Chamber Street led us to a pretty questionable alley where a drug deal was taking place with a bunch of homeless men. I did not feel comfortable at all! The hotel is actually the other side of the street on Prescot Street and opposite a really nice Wetherspoons.

We had checked in to the hotel before we even got there as you can do this beforehand online. This meant that when we arrived I gave the reception our booking reference and we were given 2 keys and told which room we were in. Everything was lovely and easy and it made a stressful arrival much better!

Our room was on the third floor and it was massive!! I like a room with a bit of extra space, especially when we have Erin with us and this was plenty big enough. The cot provided wasn’t right on top of us and we had options for where to put it. I generally work on evenings in a hotel but I don’t like to have my laptop light shining on Erin or the cot so this was perfect. Erin was amazed as soon as we got in the room and loved running around to explore what there was. 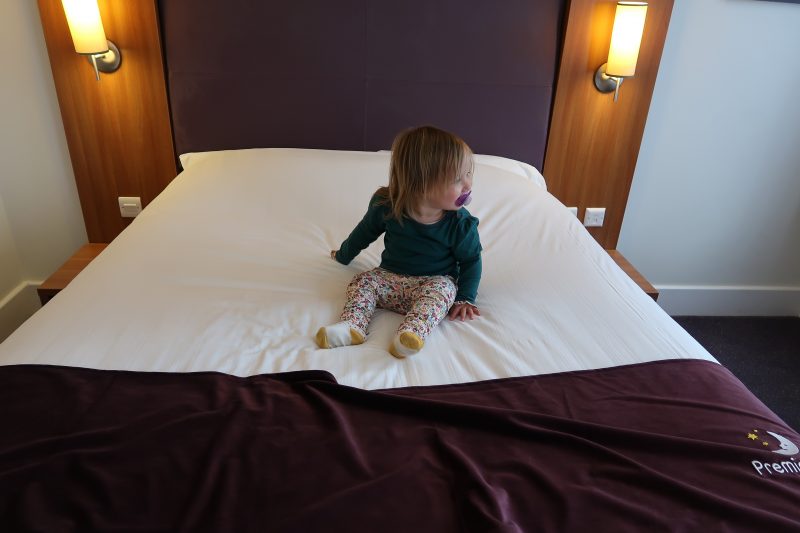 In the main room we had a massive bed, table and chair, desk area, mirror and drink making station and loads of space to hang our clothes. One side of the bed had plug sockets but not the other for some reason and there was no plug sockets right next to the mirror which was a bit strange. It didn’t really help getting ready in the morning. However, seeing as everything else was so nice I didn’t mind this too much. 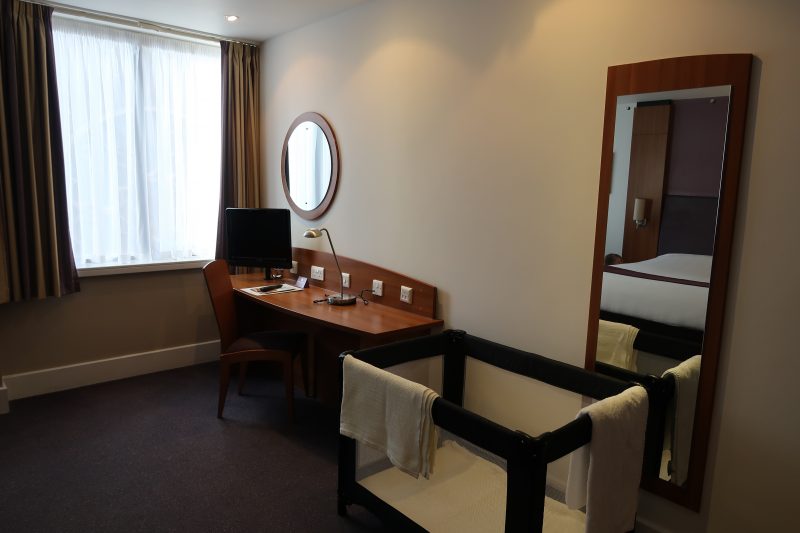 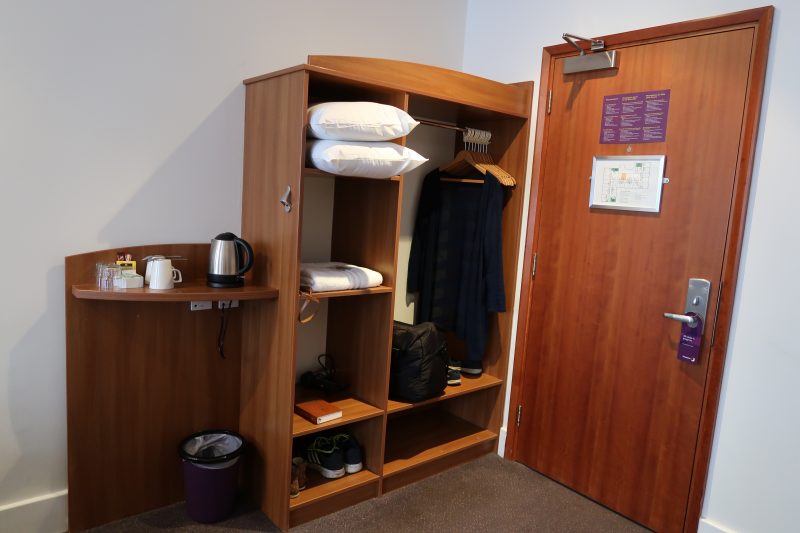 Erin isn’t a massive fan of showers, mainly because we don’t have one so she isn’t used to it. The bathroom at the Premier Inn London City was a lovely size and the shower was massive. There was even a seat in there! The shower was big enough that I could point the shower head away from Erin and she sat on the floor playing happily with the water. She wasn’t bothered at all that she was in the shower because it was big enough for her to have fun in. I was pretty impressed! 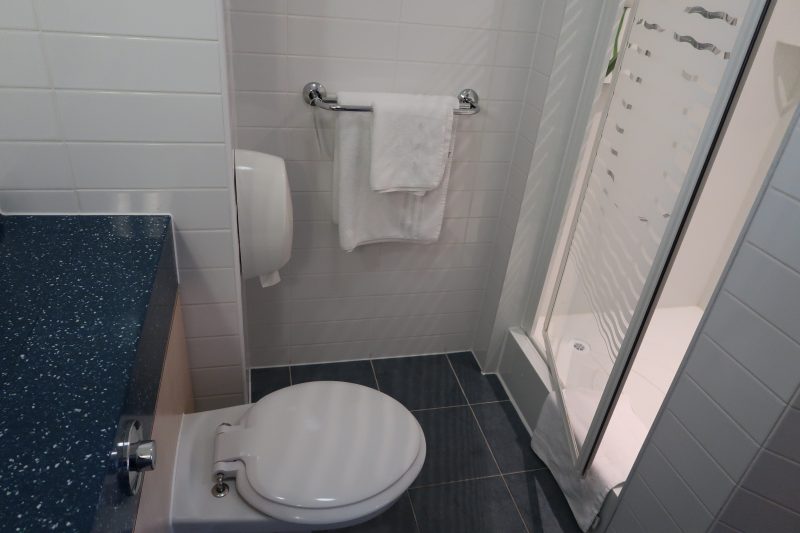 When we go away with Erin I like to pay for breakfast at whichever hotel we’re staying at if possible because it makes things so much easier. Erin gets up pretty early and this saves having to wander round trying to find somewhere to get her something okay to eat at 6 or 7am! Premier Inn has an all you can eat breakfast for £10.50 per adult and children eat free when an adult pays. We were able to have a selection of hot items such as eggs, hash browns and sausages as well as cereals, toast, fruit, yoghurts and muffins, just to name a few things. 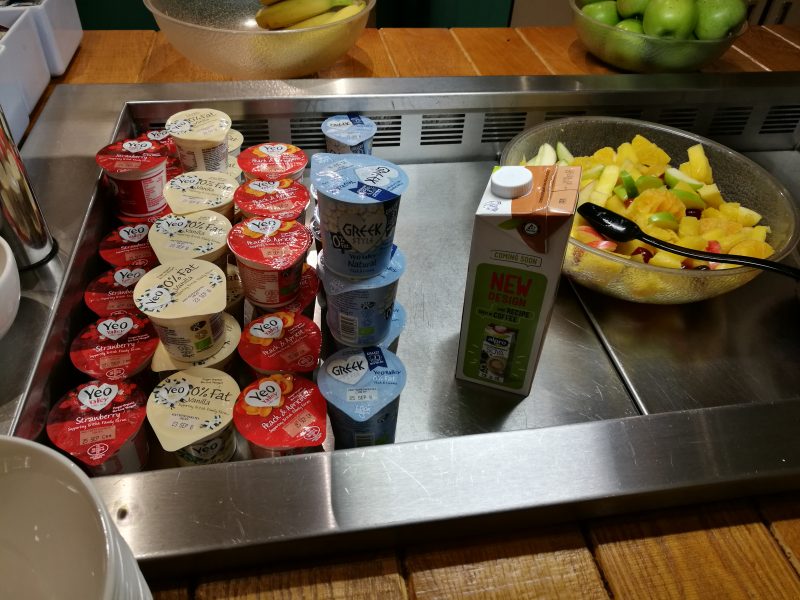 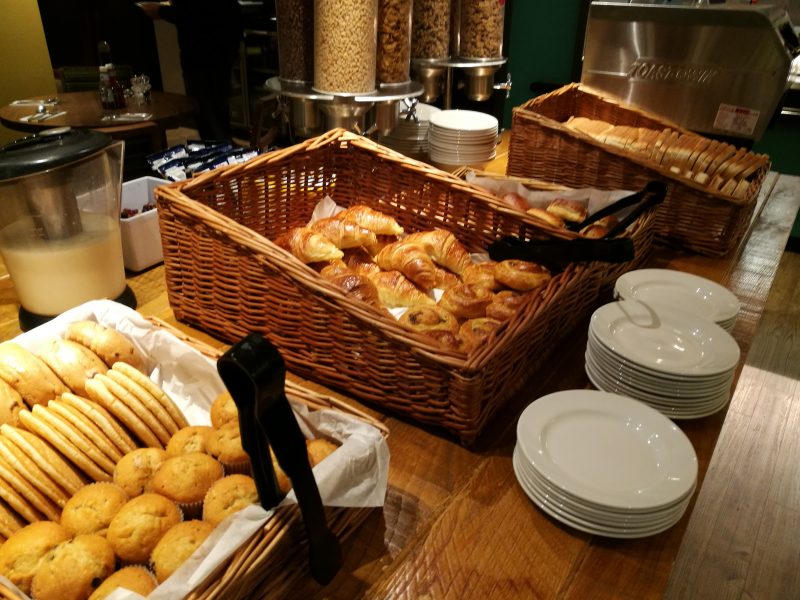 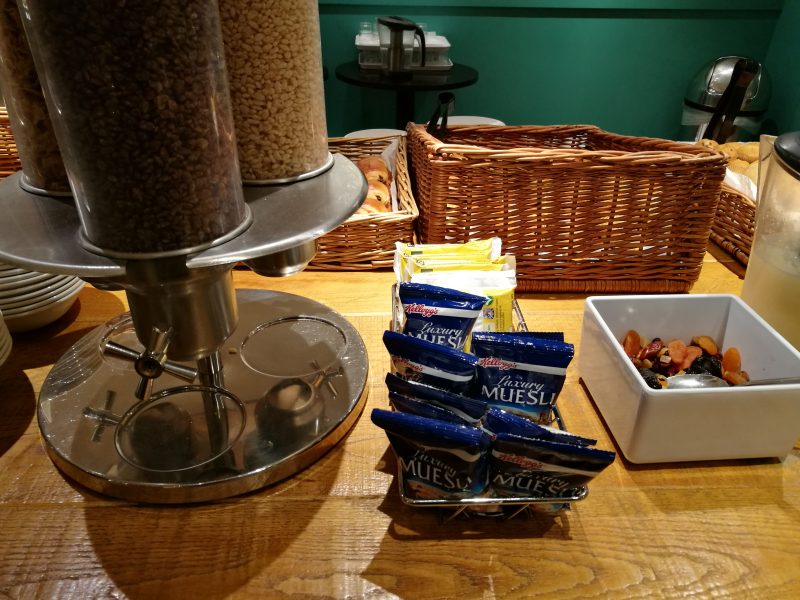 Breakfast was okay. I won’t lie and say it was great. It wasn’t. For £10.50 I definitely didn’t eat my money’s worth each morning. John tended to have more hot food than me but I didn’t have much at all. The one thing I was really looking forward to was the American Style Pancakes, as advertised on the Premier Inn website. If I was American I would have probably been a bit offended at what they served. The pancakes did resemble buttermilk pancakes but they were in the middle of the cold selection, stacked up. These pancakes were not cooked fresh, they were dry as hell and actually inedible. I tried them one day 1 and ate 1 bite. John decided to try them on our last day, while I sat there laughing at him for trying. He didn’t manage much more than I did.

Overall, our stay at the Premier Inn London City was okay. John and I didn’t sleep too well and Erin didn’t either. Erin isn’t used to sleeping in what was quite a hard cot anymore and we’re not used to sleeping in a room much warmer than our whole house, even with heating etc. turned off! However, we cannot fault how nice the room was at all because that aspect of our stay was great.

Would I stay here again? Probably not but only because we have stayed in other hotels with nicer breakfasts for around the same price. 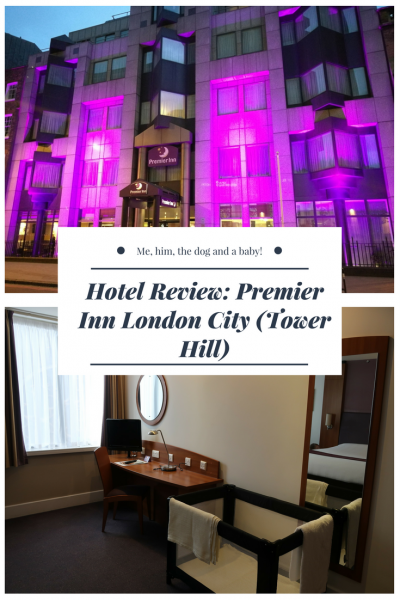