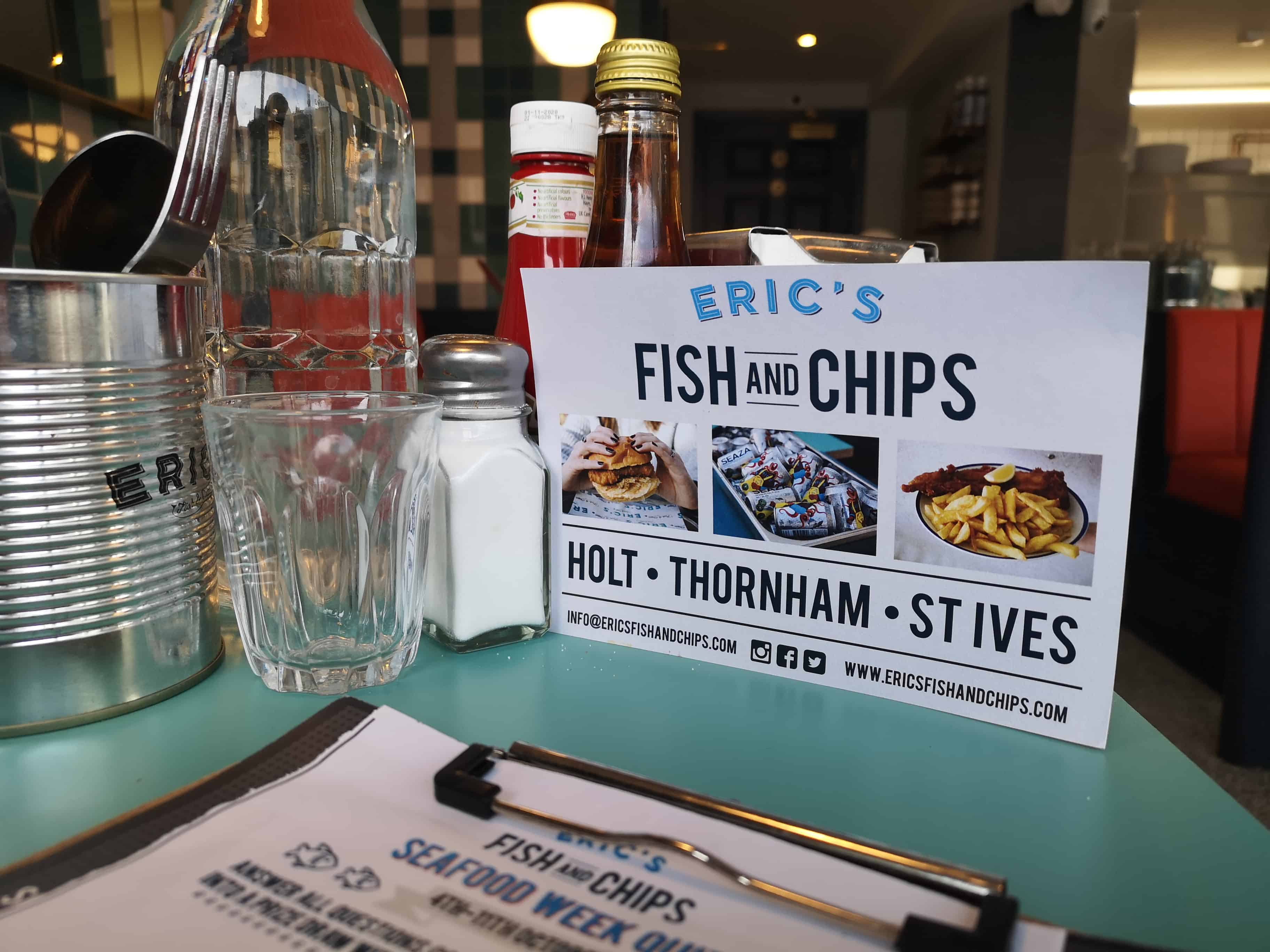 Being from Grimsby I am pretty picky about my fish and chips. Since moving to Norfolk 6 years ago there has only been a few places where I will happily eat haddock. So, when I was invited to see what Eric’s Fish and Chips (Holt) was like I was excited. I’d heard good things and couldn’t wait to see if the food lived up to the reputation. 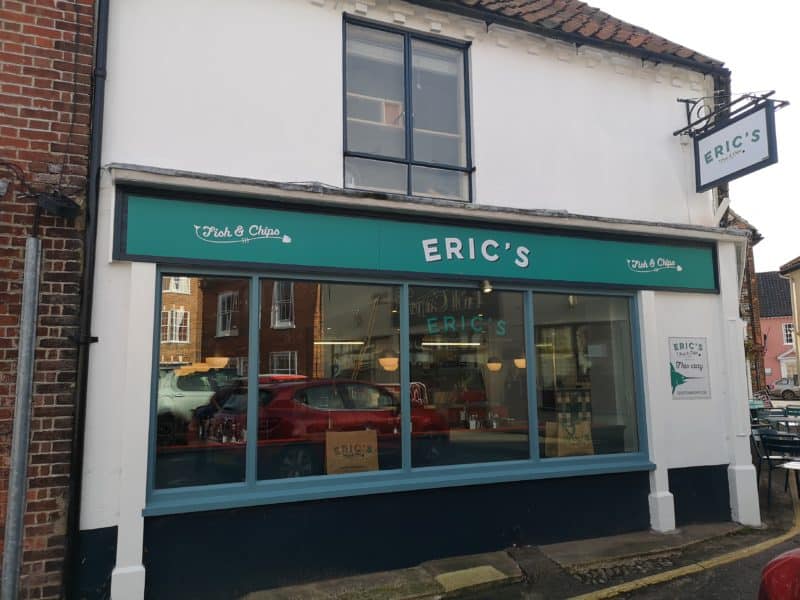 Eric’s can be found on Fish Hill (yes, really) in Holt, which is just off the high street. There are a couple of parking spaces outside, one of which we were lucky to bag on the day. There are bus routes into Holt as well as the North Norfolk Railway so it’s quite accessible even if you don’t drive.

We arrived just after opening time and were the first customers of the day so we had the pick of the seats in the restaurant. We chose a cosy corner near the window which gave us plenty of space as my friend had her baby with her. Before we ordered our food, the baby needed changing. Unfortunately, Eric’s doesn’t have baby changing facilities which was a real shame as even with a thin mat down, the floor was still pretty cold for the baby. 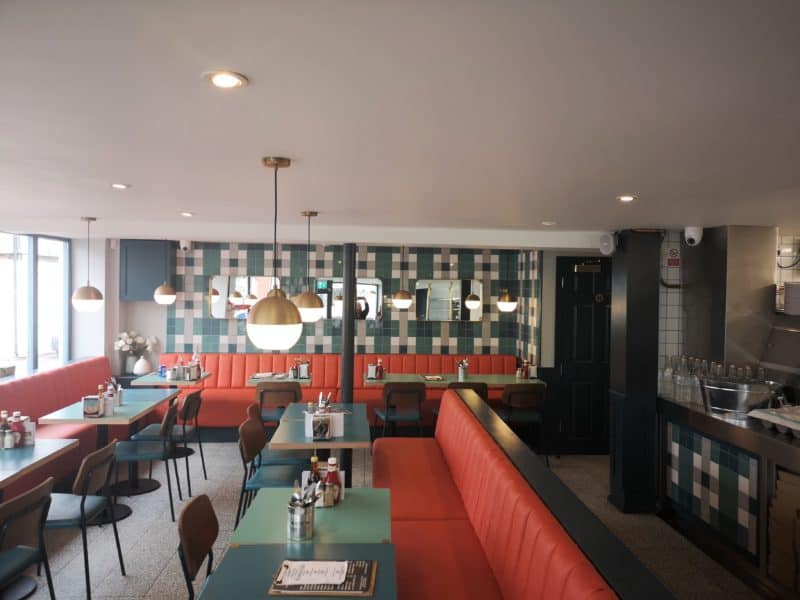 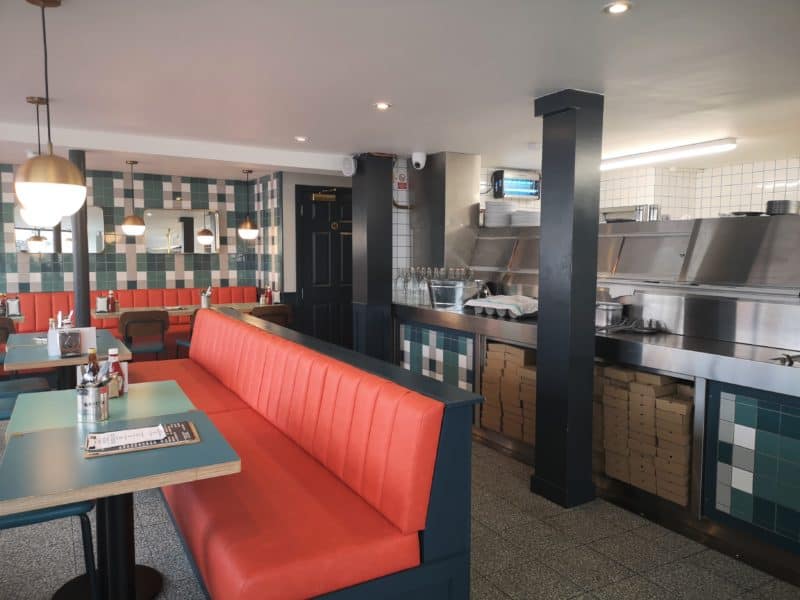 The menu at Eric’s Fish and Chips isn’t huge but there is everything you could want to see on there with the addition of some surprise items. I very quickly opted for a large haddock and chips with bread and butter while my friend had halloumi spinach arancini, battered king prawns and chips. 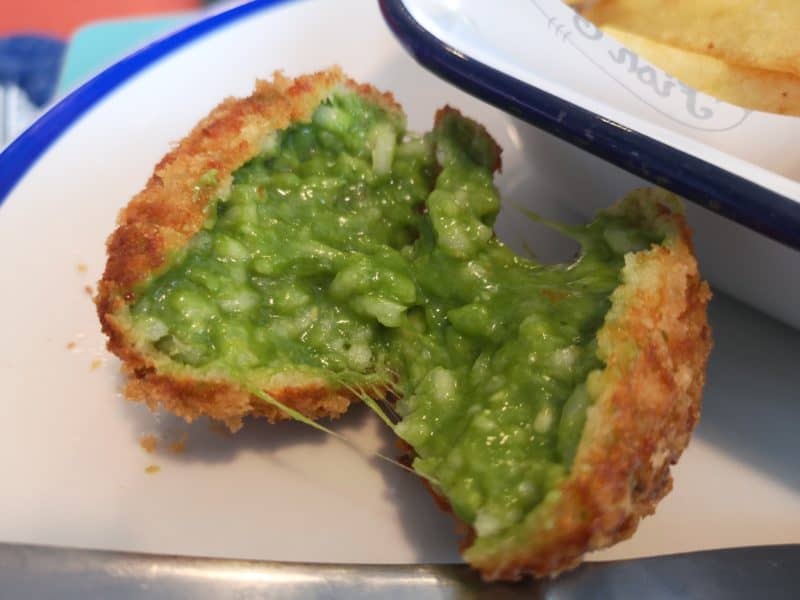 Within the first bite, my friend was instantly impressed with the halloumi spinach arancini. Cutting into the bread crumbed ball, you could see lovely chunks of halloumi as well as the super vibrant colour from the spinach. When someone uses the words ‘never want them to end’ around any kind of food, you know that’s a good thing!

The battered king prawns were sadly not quite as amazing. My friend described them as being just okay but nothing special. However, they are hand battered in the restaurant and not a cheap bag of frozen king prawns. Maybe all they needed was a dip or sauce of some kind to spruce them up a bit. 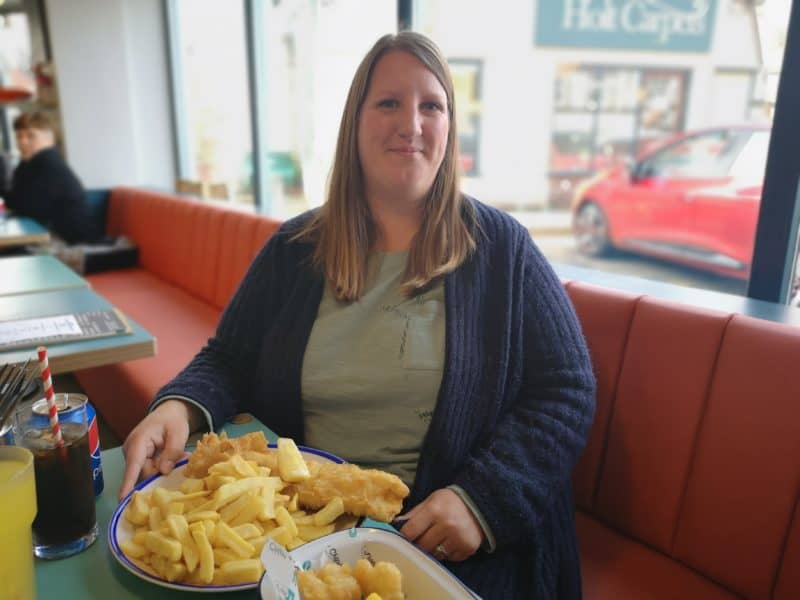 I cannot tell you how excited I was about the haddock. As I said before, I’m really picky about where I eat this and can count on one hand the places I will go in Norfolk. When the plate of food was brought out I have to say that I was quietly confident that it would be delicious. 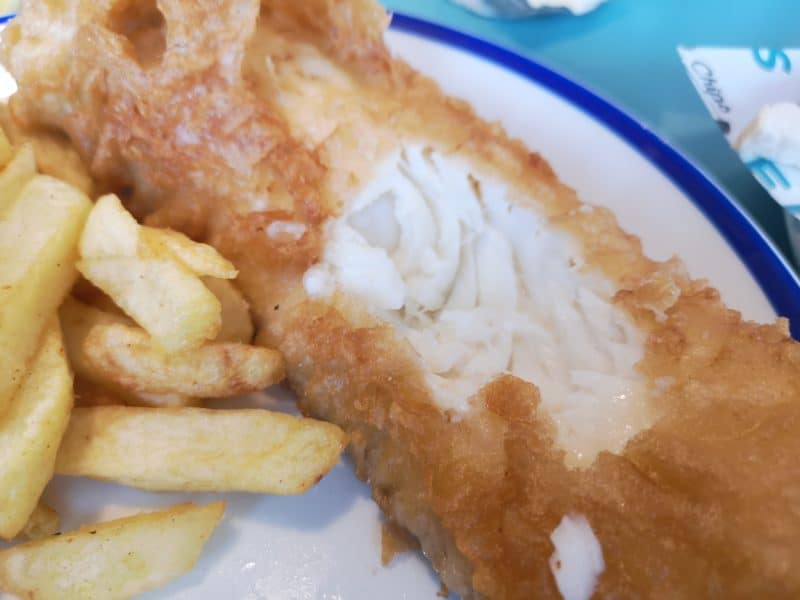 I had absolutely no complaints whatsoever about my haddock, or the chips. The batter, was light crisps and had a wonderful crunch as I cut into it. Even more impressive was how white and perfect all of the fish underneath was. From the very first mouthful I was in heaven and I wanted to savour every mouthful. I’ll be honest though, the large was probably a bit ambitious for me and I didn’t quite manage to eat it all. I really gave it a good go though.

The haddock, has blown my previous favourite out of the water (oops!) and I already want to go back for more. 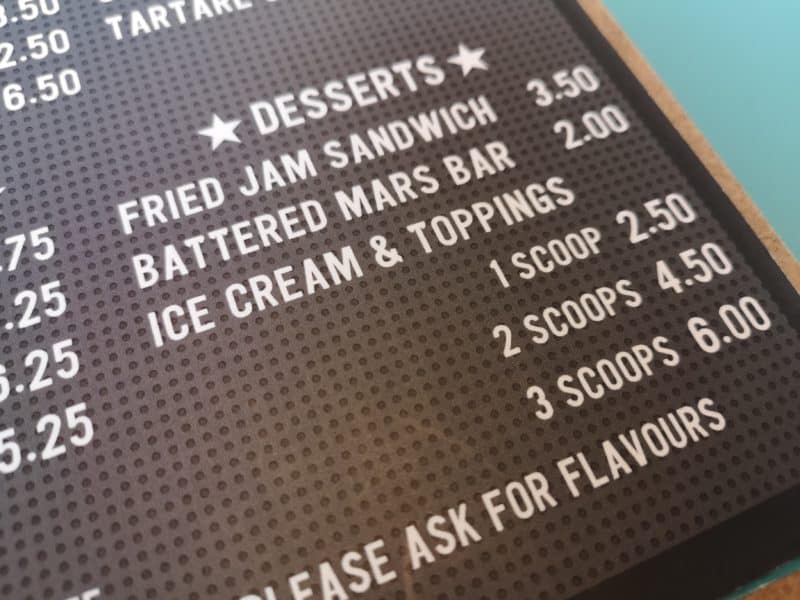 Even though we were both stuffed, our server asked if we could be tempted by the desserts. It seemed silly not to at least try them so we went for the fried jam sandwich and a battered Mars Bar. 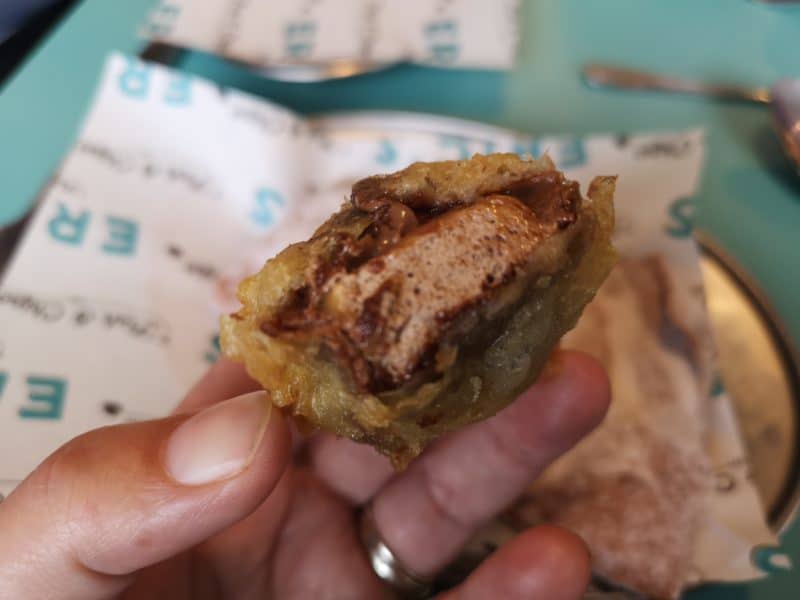 Battered Mars Bars have been around for years but for some reason I just haven’t ever really wanted to try one. Now that I finally have, I feel like I’ve been missing out for all of these years. I guess I didn’t expect the batter, like you associate with fish or sausages, to taste right with something so sweet but it really does. The Mars Bar inside was still solid enough in places but the top layer of chocolate and caramel was gooey and delicious. 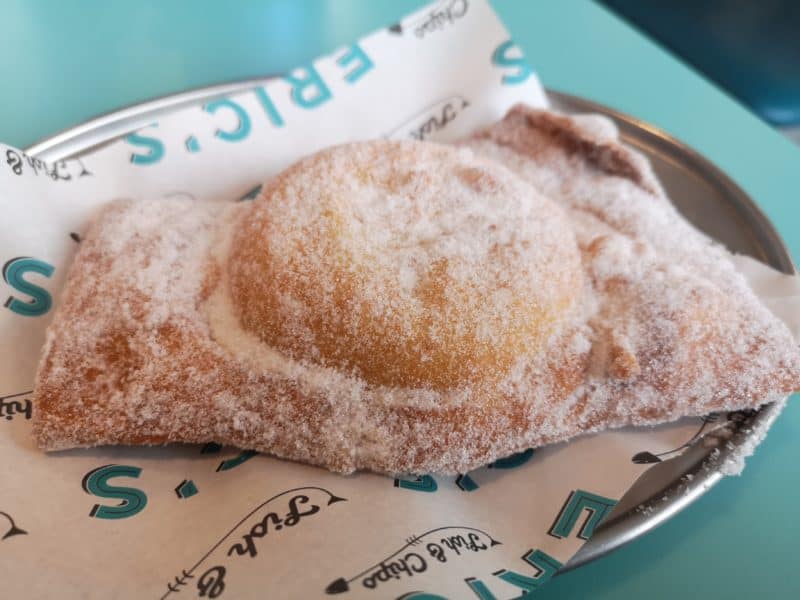 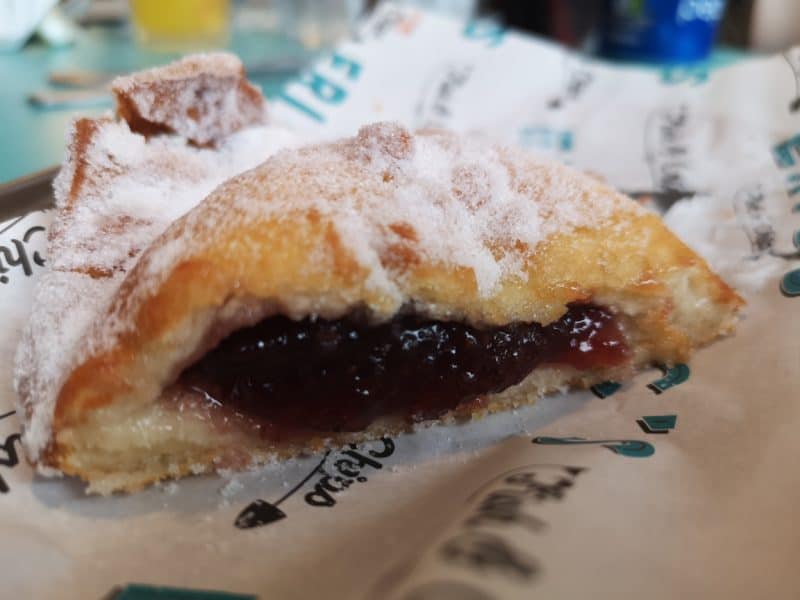 Next up was the fried jam sandwich. Now, you’re probably thinking what is this strange choice of a dessert because that’s exactly what I was thinking too. I just couldn’t think how it would come out or how it would taste. As good as the Mars Bar was, the fried jam sandwich was something else altogether. Imagine a really deep filled jam doughnut but warm, squidgy and sugary. Every mouthful made me want more… even if I did even up covered in sugar while I ate!

Not only did we have a great lunch at Eric’s Fish and Chips but the staff were friendly, welcoming and answered any questions we had about the food. Something else to mention is that they have a children’s menu, activities for kids and they are licensed too so you can have a wine or beer with your meal if you want to. 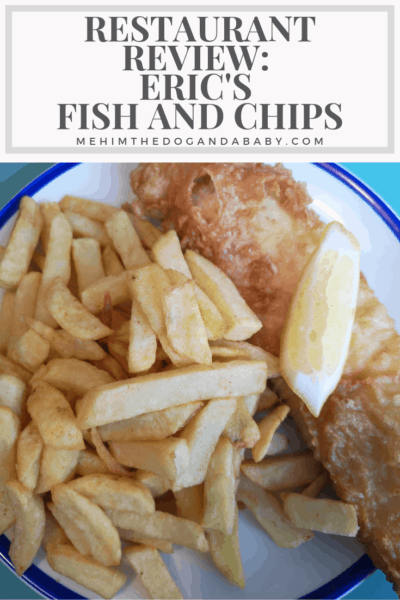