April saw us head to London as a family and with our new(ish) Babyzen YoYo. I had been drooling over this stroller for a while now thanks to one of my friends. I was dreading travelling with the other pushchair we have as it’s so big and bulky. A trip to Cambridge made me realise it just would not cope with the tube and a toddler. This is something I had been absolutely dreading so I thought I’d write about things we did well, things we didn’t and things that I wish we’d done.

We arrived in London at Liverpool Street Station. For some reason I thought it was fully accessible so I thought our first journey would be lovely and easy. Nope! Not accessible so we had to use the escalators straight away. We stood at the top of the escalator not knowing what the hell to do. We had Erin in the stroller, a MASSIVE case and me terrified of escalators. Now, I can do them okay but I can’t be carrying much and I like to have someone I know behind me when I’m getting on so people can’t accidentally knock into me.

Our first trip on the tube really was not fun. We ended up changing at a station with a gazillion steps so that was another obstacle we had to figure out. I was so happy to reach our stop and go check in at our hotel. After we got rid of the suitcase the tube was SO much easier. We didn’t have to worry about juggling everything we had with us. Instead, I could get on with no panicking and John could sort Erin out. This also feed me up when we had to tackle any steps because we could carry Erin down between us. 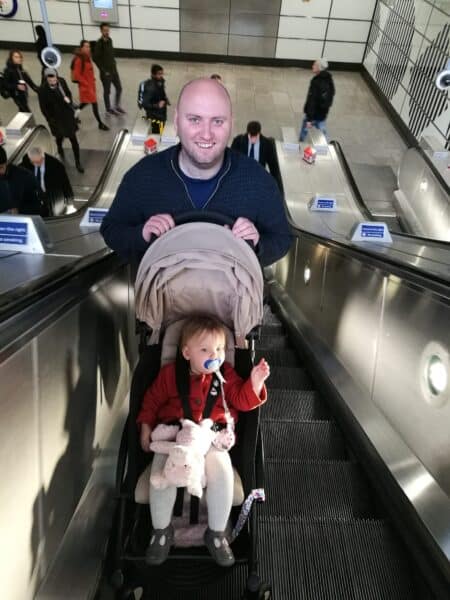 What I loved about taking the Babyzen YoYo with us was how nicely it fit on the escalators. It was narrow enough that it didn’t take up so much room and people could walk past us with no struggles at all. It was also light enough that John was able to get it on and off the steps really easily.

So many people had said that people would help us out on the tube. I think most of the nice people in London were ignoring us while we were there. I think maybe it was because there was 2 of us and people assumed we could manage. We couldn’t. I did purposely make John wait at the top of steps a couple of times and looked pathetic to see if someone would offer to help. They did. I guess this is the biggest thing you need to learn from this post. Look pathetic to make people help you. Look like you’ve got it all figured out and you’re screwed. 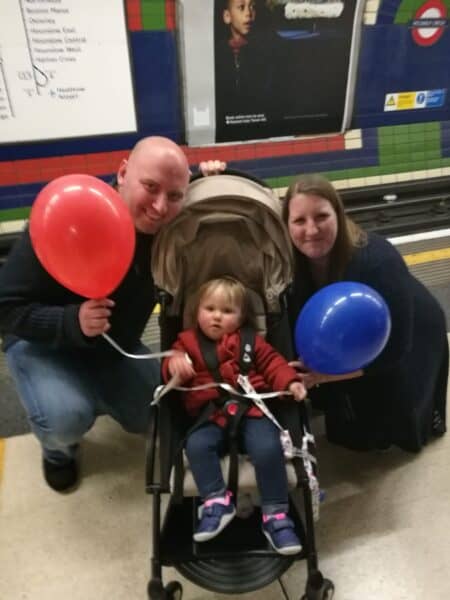 Another little tip; DO NOT TAKE BALLOONS ON THE TUBE! The people at Bubba Gump Shrimp were absolutely lovely giving these two balloons to Erin but my  God what a pain they were. They were floating everywhere, hitting people in the heads as they passed us on the escalator and they were really a pain in the arse during rush hour!

I really wish I could baby wear. It would have been so much easier if I could have put Erin in a carrier but I get so many problems with my stomach after my c-section that I just can’t cope with the extra weight and pressure. Erin also doesn’t like to be too constrained so I don’t think she’d cope well if John did the carrying.

Have you been to London and took a toddler on the tube? What tips would you give people?

1 thought on “The Tube and a Toddler”