We’ve all got those jobs in the kitchen that annoy the hell out of us. I have loads! My biggest hatred though is spending loads of time preparing and cooking meals in the kitchen when I could be spending time with John and Erin. Recently I have been looking for ways to cut down on household chores and jobs so that I can spend time with my family. I have always wanted a food processor but it wasn’t until we got the VonShef 1000w food processor from Domu.co.uk that I really realised just how much they help in the kitchen.

To start with, I was expecting a food processor to take up far too much room. While it does take up a fair amount of space if we keep it on the counter, I don’t mind it at all. Something I have always worried about with a machine like this is it accidentally being knocked off the counter but the VonShef food processor has suction cups underneath to keep it in place. I love that it is always safe in it’s place whether we are using it or not. 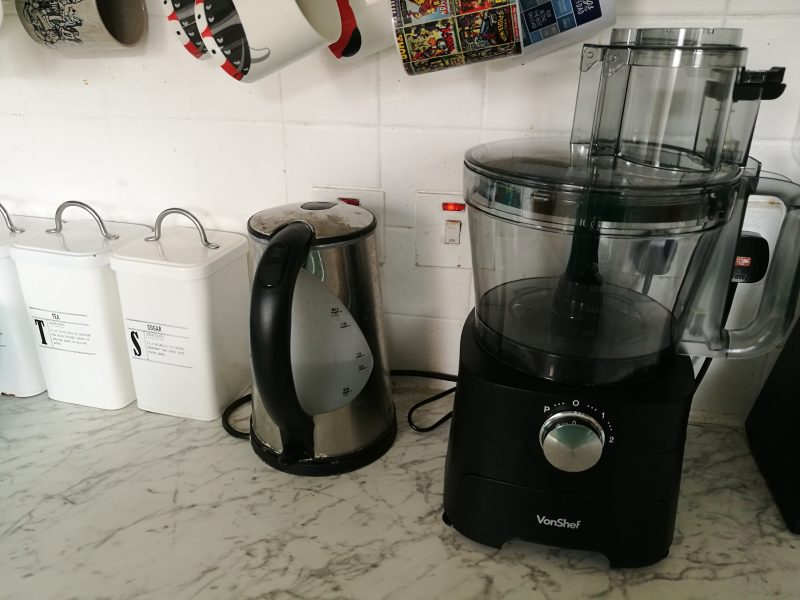 This particular food processor comes with loads of accessories. The main bowl has a whopping 3.5 litre capacity and the blender holds up to 1.8 litre capacity. While this is a great start, there is more! This machine chops, blends, purees, grates, shreds, mixed and also makes dough thanks to the 7 different attachments. Instead of having to keep the attachments in a drawer somewhere to be forgotten about or lost, the VonShef food processor has a handy drawer at the front, designed just for these bits. Everything you need is always right in front of you and you can change attachements with ease. 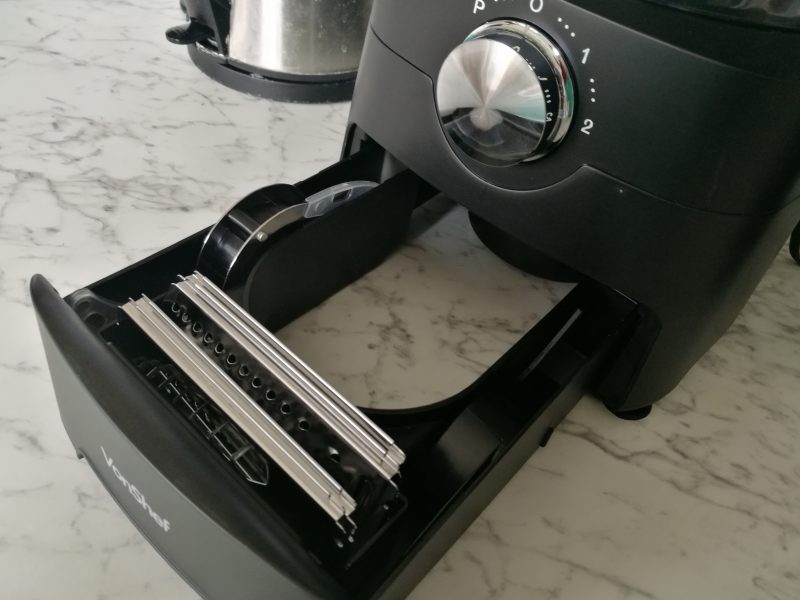 As someone who had never used a food processor before, I have to admit that I was really nervous about using it. Setting it up was a complete doddle though so that wasn’t an issue. My first attempt was to chop carrots ready for a roast dinner. The food processor comes with 2 chopping blades, one for thick and one for thin. I think I chose the wrong one. My carrots came out quite thin and some a bit of a strange shape. There’s certainly a knack to holding down the veg you’re chopping, even with the accessory for this.

For my second attempt with the food processor I thought I’d try to do something with the blender attachment. Seeing as we have actually had some nice weather recently I thought I’d make some slushies! The blender is supposed to be able to cope with ice and frozen fruit, such as berries so I thought I’d put it to the test. 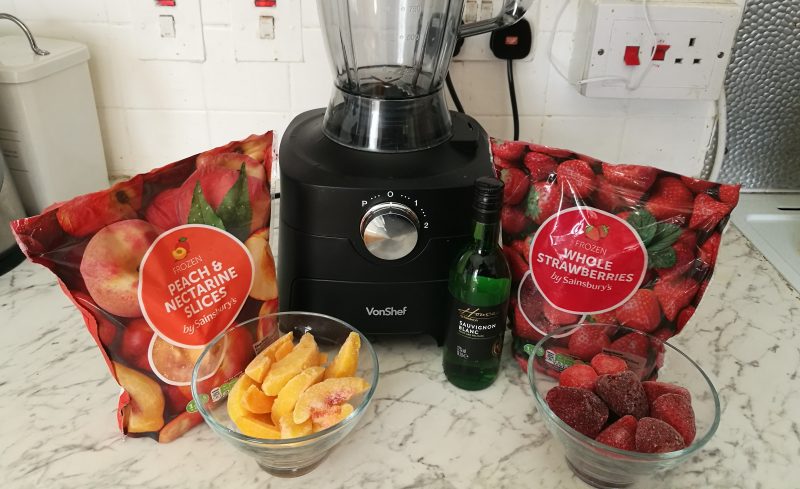 Unfortunately, the blender did not like the big chunks of fruit that I put in there. I don’t think it was so much that the fruit was frozen that was the problem but that the pieces were too big! 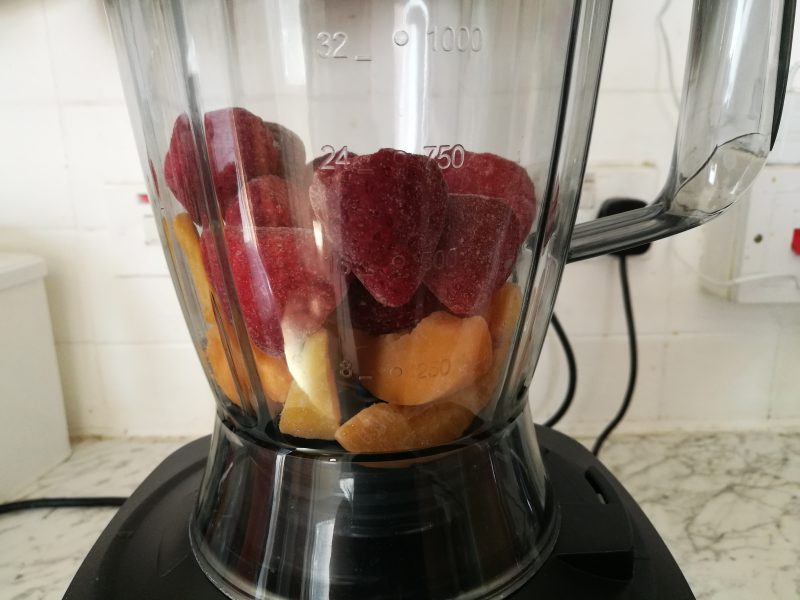 After thawing the fruit a bit to make it a bit easier for the blender, it all worked really well! The fruit was blended in only a minute or so and ready to drink as a slushie. Feeling a little bit naughty, I decided to throw some wine in and make wine slushies instead. 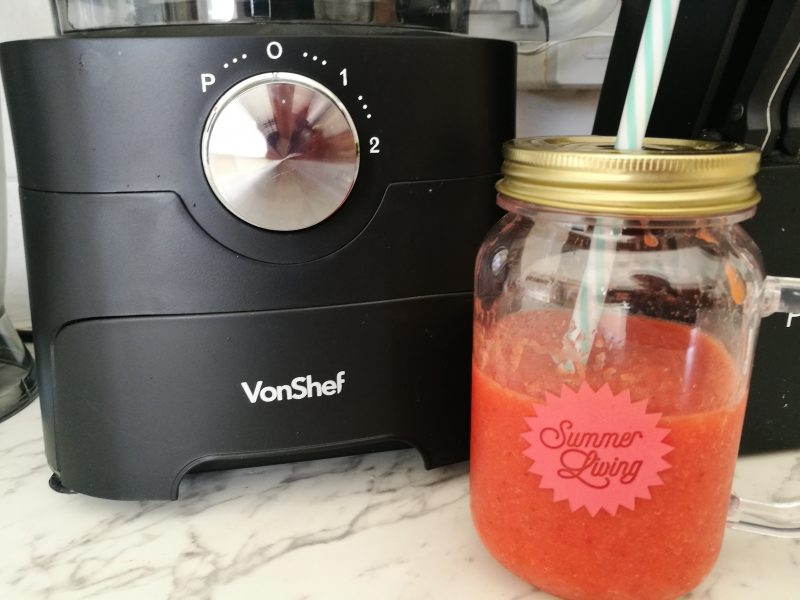 I have barely touched the surface of what this food processor can do but I know I’m going to be using it all the time! I have so many ideas for it already so there will be more posts to come from me. Domu.co.uk sell a whole range of kitchen equipment as well as items for the home and garden. I already have my eye on a couple of other items!

Do you have a food processor? What do you use it for the most?