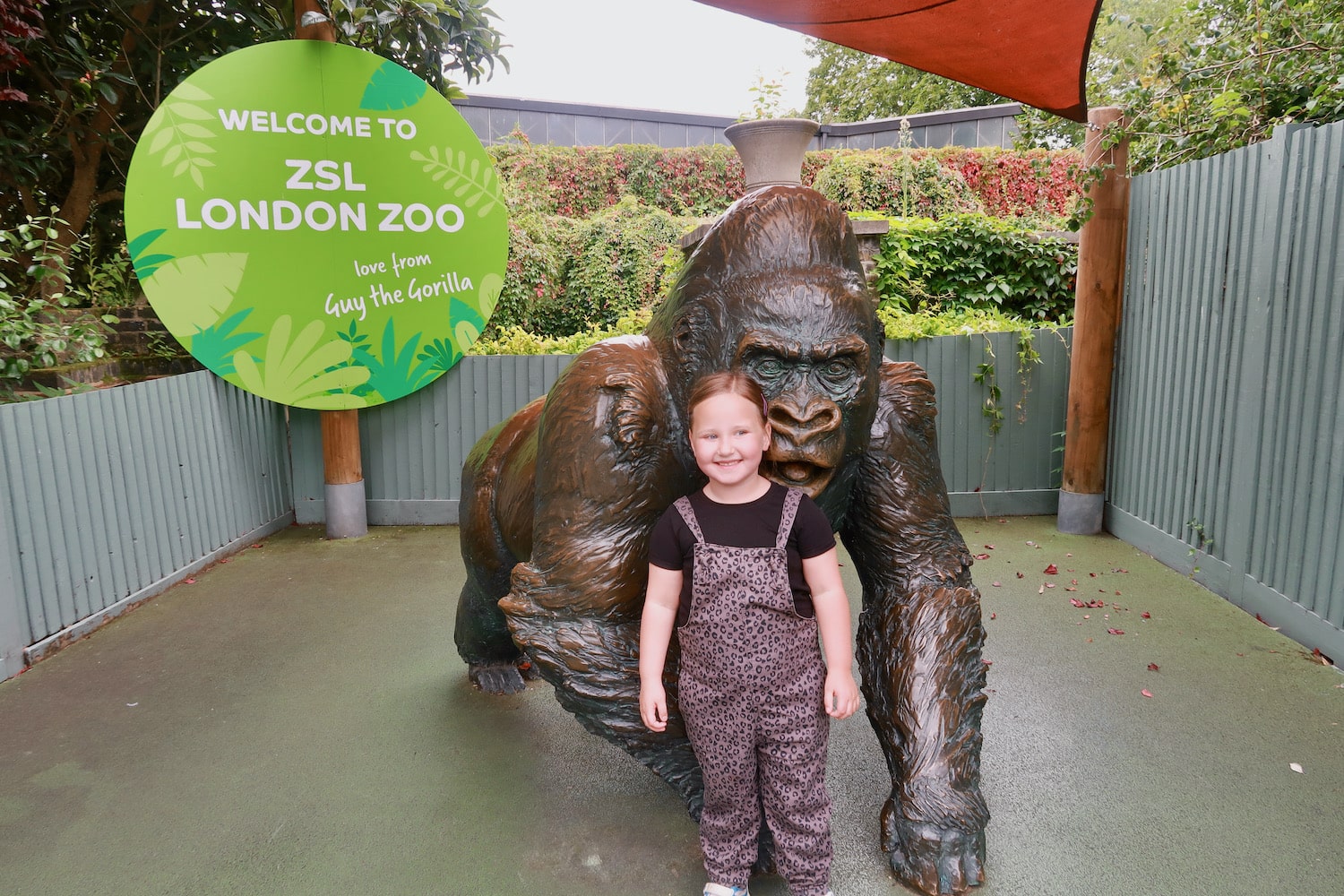 I don’t have many photos from when I was a child but one that I remember seeing is of me and my sister with the gorilla statue at London Zoo. I’ve wanted to get a photo like this with Erin for quite some time so on a recent trip to London it was the perfect time to spend the day at the zoo.

Before I even get into the amazing things to see at London Zoo I want to talk a little bit about safety. A lot of people want to make sure their days out are as safe as possible now. I really feel like London Zoo have done everything possible to give people a fun but safe day out so I wanted to share what they’ve done around the zoo.

Due to Covid, London Zoo has implemented some safety features around the zoo to help keep both staff, animals and guests safe. Paper maps are no longer given out although there are huge maps placed around the zoo and there are three different one way systems to follow. You could download a PDF map and print it out before your visit if you wanted a map to follow while you walk around.

The large maps clearly say which routes are for which animals and the routes are actually really easy to follow. Taking a picture of the main map is a really good idea but you can also follow the clear, colourful markings on the floor around the zoo. These are a mix of arrows and paw prints so you really can’t go wrong with where you’re supposed to go.

Another safety measure at London Zoo right now is mask wearing. As this is an outdoor attraction then it’s not something that’s being asked in all areas. However, in areas such as cafes, shops and indoor animal enclosures the zoo asks that all visitors aged over 11yrs (over 3yrs in a couple of areas) without exemptions to wear facemasks. There are clear signs where this should be done and we even saw staff asking people before they entered an area.

Some of these areas as quite small which means close contact with others so we had absolutely no issue with putting masks on. We forgot one for Erin but had a spare adult sized mask in our bag so we made that work in a couple of enclosures.

Something else that we noticed during our visit was the amount of hand sanitiser stations and hand washing stations throughout the zoo. We used these at every opportunity and really felt like the safety of everyone was thought about.

It has been around 3 years I think since our last visit to London Zoo and Erin was asleep for most of the time so we don’t really count it. That definitely wasn’t the case this time though and Erin was so excited about what animals she was going to see. Instead of writing about absolutely everything I thought I would write about some of our favourites and the parts we enjoyed the most.

This area, although called something different now, has been one of my favourites since I went to the zoo as an adult for the first time. It’s somewhere that has stayed with me since that visit and somewhere I couldn’t wait to show Erin, especially as she learned about mini beasts at school last year.

As you enter the building the first thing you come to are the leaf cutter ants. I really love watching the little ants walking from one side of a rope to another carrying their little pieces of leaves with them. Part of the rope isn’t covered by anything but of course, you can’t touch!

Throughout this area you can see all kinds of cool things such as cockroaches, stick insects and spiders… there’s even a room you can go in where there are spiders just in the trees etc. Now, I wasn’t too keen on this area so maybe not somewhere for you if you don’t like spiders because they are BIG in there but Erin and John thought it was amazing.

Butterfly Paradise is another area where you can get up close to some amazing creatures. This is long tunnel that you can walk through where butterflies are flying around freely. There are lots of different types and we had loads of fun trying to see how many different kinds we could spot. At the end of the tunnel you can see some really amazing giant moths. I didn’t realise they were there and I nearly backed into them. Erin was sure they weren’t real too, although there are signs saying that they are definitely alive!

London Zoo is quite well known for a certain scene in Harry Potter and the Philosopher’s Stone with a snake so I really wanted to show Erin this. There is a sign next to the enclosure with a picture so you know which one it is. Although that is quite cool on it’s own there is so much more to see in the reptile house.

Filled with snakes, lizards and other amphibians there is a lot to see. The snakes were definitely our favourites as we were very lucky to visit during feeding time. One snake was trying to be tempted with a guinea pig but it wasn’t interested at all while we saw another coiled around a quail! We stood and watched it for quite some time waiting to see if it would eat the quail but it was quite happy sniffing it for a long time! Erin said this was incredibly cool though!

In With The Monkeys

In With The Monkeys is exactly what you’d think it would be… an experience where you get to walk around while the monkeys are everywhere too. This was probably one of my personal favourites as it was so much fun. The monkeys were climbing around all over the trees and the ropes and they were really playful. The staff here were great at telling us little bits of information about the monkeys and warned us not to get too close or they’ll try to steal our phones or cameras!

As a parent I think you’re always looking for places with great facilities for families. Toilets are something I always pay attention to and we found that London Zoo had plenty dotted around. If you’re visiting with young children especially then you’ll really appreciate this as there won’t be lots of walking until you find the nearest toilets.

Usually when we plan a full day out somewhere we take a picnic but as we weren’t coming from home this wasn’t as easy as normal. So, this time we decided to eat in the Terrace Restaurant, where hot meals and sandwiches etc. are offered. There are other kiosks around the zoo where you can get food but we wanted more of a sit down meal to make sure we had a proper break from walking around.

The Terrace Restaurant has things like sandwiches in fridges but there are also a few different food counters if you want hot food. These included stone baked pizzas, fish and chips and burgers, where you wait for the food to be cooked. Between us we had haddock and chips, a children’s fish finger and chips and a children’s pizza and chips and they came to £28. I thought the price was really reasonable for what we got and the food was great. None of us left anything so that really says something and the portions were good too. I would definitely eat here again the next time we go to the zoo.

From September 20th until October 31st there is a new attraction at London Zoo with fun children’s TV characters Bing and Flop!

‘Follow our free, self-guided trail where young children can help Bing and his friends complete the Zookeepers’ daily checklist, with a fun activity to do at each checkpoint. Don’t forget to join Bing and Flop in our interactive storytime sessions*, led by our Zookeeper, for a day out to remember.’

You can find out more here.

We had the best day out at London Zoo and were there from opening time at 10am right until about 5:15pm. In this time we managed to go around the whole zoo and see all of the animals. I think the only thing we didn’t get to do was to use the play area which we just didn’t have time for. London Zoo is such a fun day out for the whole family and is well worth the entrance fee. 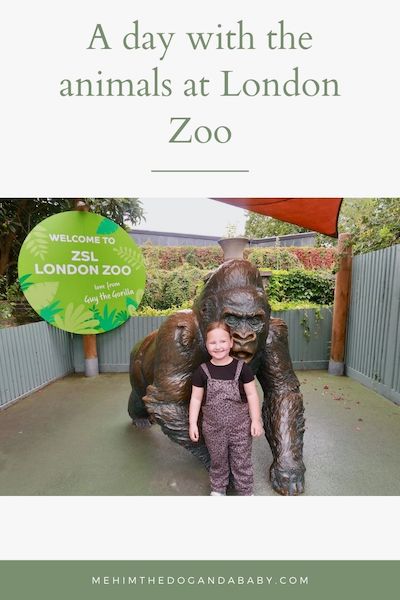