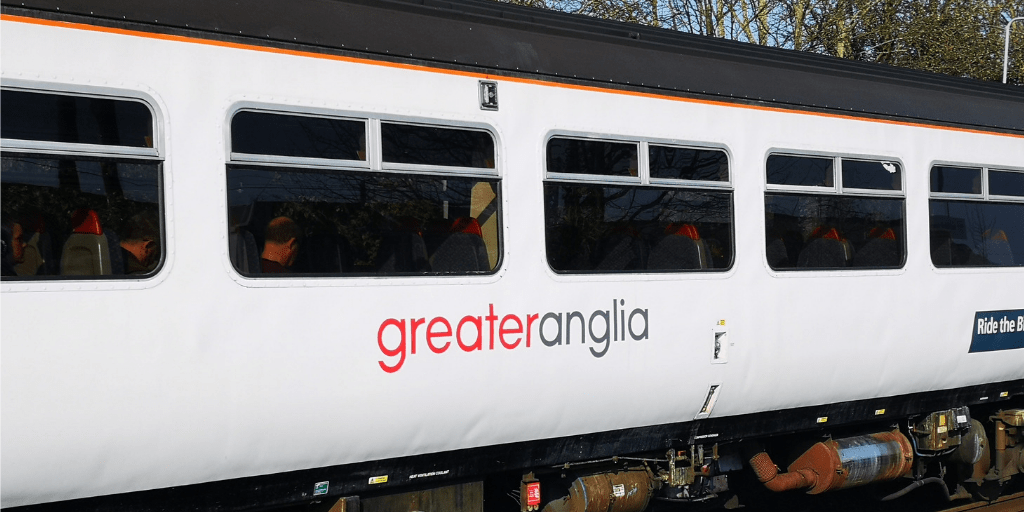 The first time I ever came to Norfolk I remember passing through somewhere with the most beautiful cathedral. That place was Ely in Cambridgeshire. I would pass Ely every single time I came to Norfolk and every time made me want to visit even more. It has been 7 years since I first visited Norfolk and even though I have lived here for nearly 6 years now I still haven’t made it to Ely. Greater Anglia recently got in touch to let us know that there are some great locations for days out on the network so this was the perfect time to get a train to Ely.

We live in a small-ish town called North Walsham which luckily has it’s own train station. Living in North Norfolk can mean feeling a bit out of the way sometimes but being on a Greater Anglia route makes things a lot easier. After a 30 minute train journey into Norwich it is then only around an hour to Ely so it doesn’t take very long to get there at all. When travelling with a 3 year old this is really quite important. Erin does okay on trains but can get bored easily so the journey time is just right for her.

When got to Ely we headed straight for the river as we’d arranged to go on a boat trip with Liberty Belle Cruises. It was only a 5 minute walk from the train station once we’d figured out where we were going. On the way to the boat Erin had spied a park and desperately wanted to go and play so while we waited, and on the boat trip, she was a bit grumpy and annoyed.

The captain of the boat was called Bob and he was super friendly and helpful. He saw that we had a pushchair, a bag and a 3 year old throwing herself around so he helped us get our things on and off the boat which was something I really appreciated. The trip down the river lasts around 30 minutes and it was a really pleasant journey. The river cruise only costs £7 for adults and £4 for children so the price is really reasonable too.

Even though Erin was shouting for the park the whole time, I really loved the ride down the river. I enjoyed seeing the boats as we went along, a bit of wildlife and generally just people watching.

After our river cruise we had to take Erin back to the park we’d seen. I dread to think how she would have been otherwise. The park was situated in the Jubilee Gardens which was really beautiful. Erin had plenty to do at the park, played with the other children really nicely and it made her happy which was the main thing.

We had lunch booked for 1pm at The Cutter Inn which was only a 2 minute walk away from the park and it overlooked the river. The Cutter Inn is part of a group of restaurants including Riverside Bar and Kitchen (RBK) and Grand Central, all of which can be found along the river and within a few minutes of each other.

When we arrived at The Cutter Inn it was very busy and I don’t think there was any tables free so booking is an absolute must. As soon as we sat down we quickly figured that Erin was far too tired and worked up and she needed a bit of a drink. After ordering her a drink John took her for a walk while I ordered food and she fell asleep on him!

Even though Erin slept through her lunch it did mean that John and I got to eat our meals in peace and that’s something that doesn’t happen often! John went for the Slow Roasted Pork Porchetta while I had a Buttermilk Chicken Burger. We did order Chicken Tenders for Erin too but she obviously didn’t eat this because she was asleep.

After ordering our meals took around 30 minutes to arrive which was really quite good considering how busy the restaurant was. There was staff coming out of the kitchen often though and each time the food looked delicious. It was great to see enough staff to cover the needs of the restaurant and absolutely everyone I saw had a smile on their face too! The young woman serving us was wonderful and couldn’t do enough for us so the service at The Cutter Inn was really exceptional.

John and I both really enjoyed our meals and seeing as Erin slept through hers we finished that off as well! The main meals are a really nice size without being too much and because of this, we both had room for dessert. John went for the Braeburn Apple and Blackberry Crumble while I chose the Trio of Desserts which included Eton Mess, Warmed Mini Chocolate Brownies and Spotted Dick Sponge Pudding.

Erin woke up very soon after our desserts arrived which meant that I ended up having to share my brownies. I nearly got away with eating a whole meal in peace. Of course, I didn’t really mind sharing though. The spotted dick sponge, which came in a small mug, was so light and fluffy and I think it was my favourite part of the desserts!

After lunch John and I was determined to go and see the Ely cathedral. I’d only ever seen it from the train so I wanted to get closer. It was only a 10-15 minute walk away from the river and the view coming up to the cathedral was well worth it. Erin wasn’t so fussed about ‘the big church’ but I was pretty amazed. I would have liked a bit more time to explore but Erin had seen another park on the way there so ‘needed’ to go back and play there!

The second park was only a small one but it had a great piece of equipment to climb and Erin had a blast. We spent about an hour at the second park before realising that it was 4:30 and we should be thinking about getting a train home. Erin declared that she didn’t want to go home so I think she would have been happy if we’d been staying overnight.

After an exhausting day I think we were all very happy to get on the train back to Norwich. A lovely lady switched seats so that we could all have a table together and even though Erin was clearly tired she did so well on the journey home. On the last leg of our journey she told me she’d had the best day ever. She might have screamed, whinged and cried a few times along the way but that was so nice to hear.

I am so glad I can say I have finally visited Ely. Okay, I might have got to experience the parks more than I would have liked but we had such a nice day out as a family. We were also really lucky to go on a day where the weather was beautiful. Getting to and from Ely was so easy and relaxed thanks to Greater Anglia! If you didn’t know, children can travel for just £2 return on any off-peak journey and you can buy these tickets on the day of travelling. Fares like that certainly make family days out a lot more affordable.

12 thoughts on “A Greater Anglia Rail Adventure To Ely”