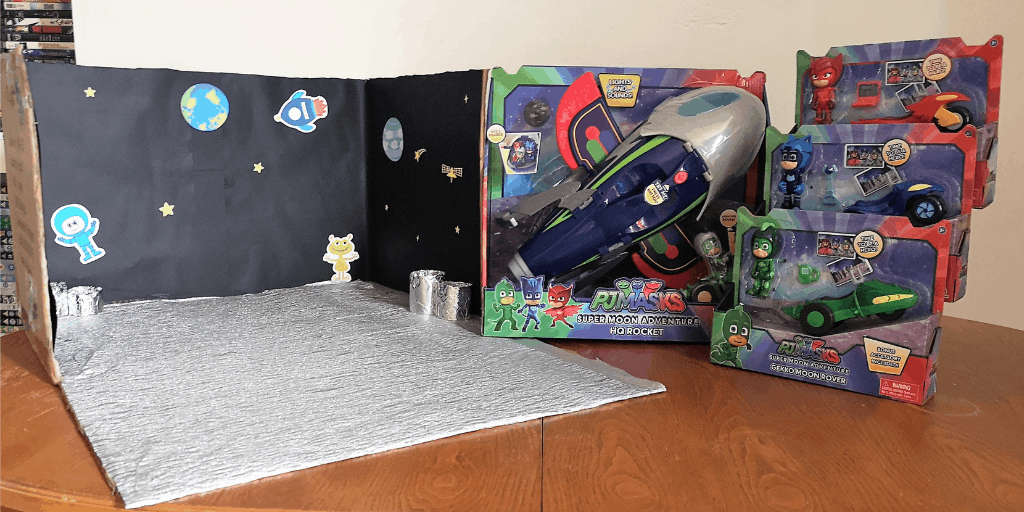 One of Erin’s favourite cartoons is PJ Masks. As soon as she sees it on TV, or a character somewhere, Erin calls out the names of the characters and gets really excited. We were recently sent the new PJ Masks Super Moon Adventure HQ Rocket and all 3 main characters with their Moon Rovers mixed with a collection of crafting items to help us create a playset! 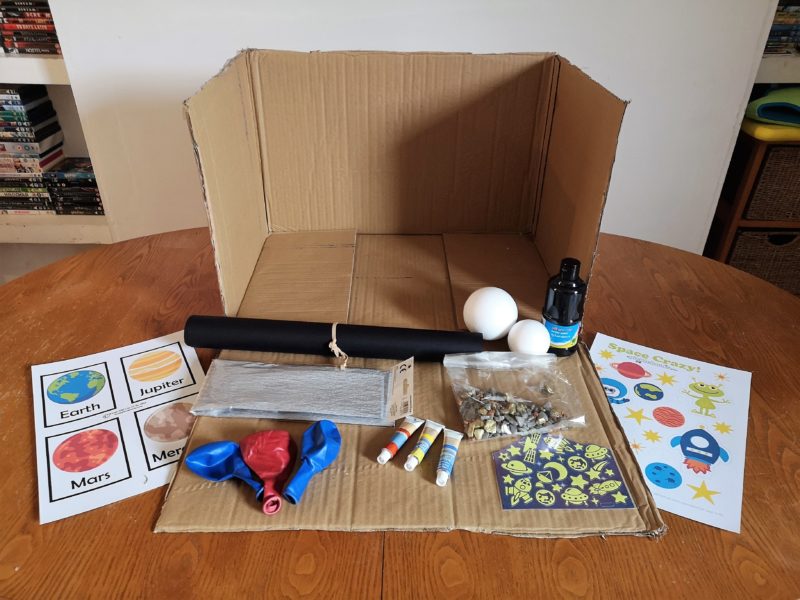 What I used for the Super Moon Adventure Playset

We were sent a selection of craft items to make this playset, some of which are pictured above. I didn’t have a plan when I was making this set so I didn’t use everything that was sent. Instead, here is a list of the items I did use:

Glow in the dark stickers 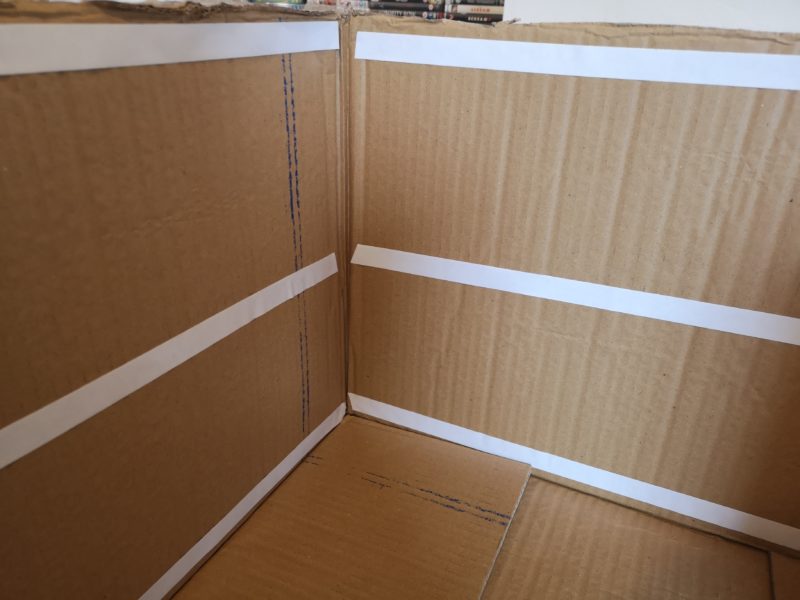 Before starting to make the playset I cut the top off a cardboard box and made it so the front panel could be opened and closed. To make the dark background I used double sided tape along with large pieces of thick black paper. You could also paint the background black but this would take quite a lot longer. I imagine you’d need a couple of coats of paint and then there is waiting time in between. 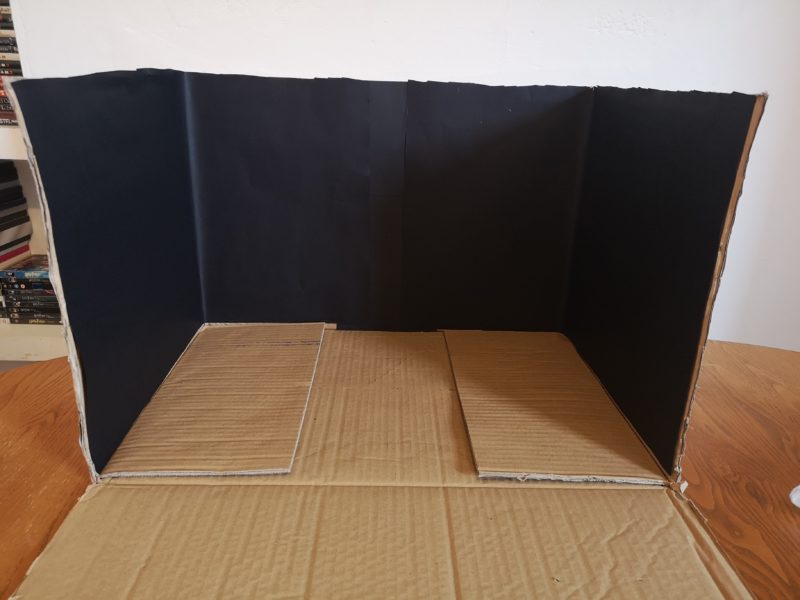 Once the black background was all in place I then copied the process for the bottom of the box but this time with silver crepe paper. The paper wasn’t quite wide enough to cover the base but I had a bit extra in the length so I was able to make it work. By using double sided tape I was able to get this stuck on really quickly although I did have to be careful to get it as smooth and straight as possible. 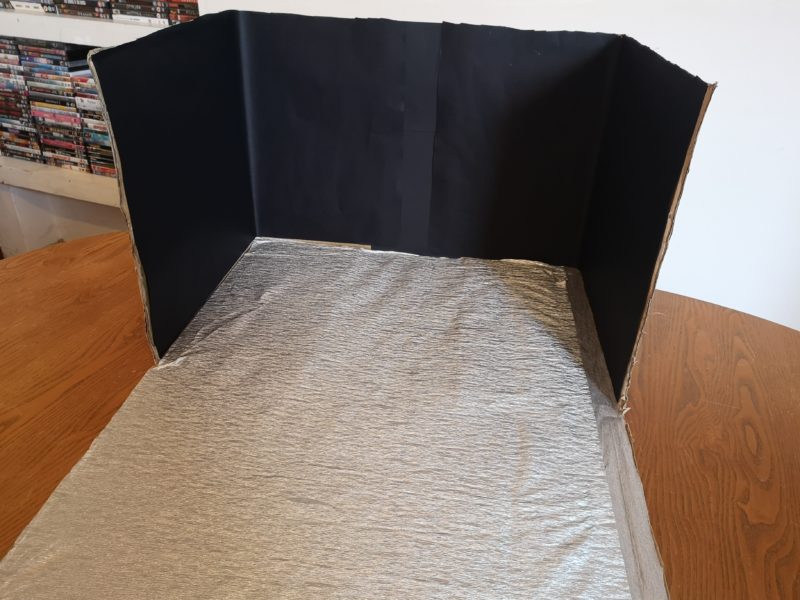 Unfortunately, I did end up with some gaps between the black background and the silver crepe paper so I just got some black poster paint and painted the gaps. The great thing about a playset like this is that it really doesn’t have to be perfect. It wouldn’t have mattered too much if there had been lumps and bumps as I could have just made it part of the playset. 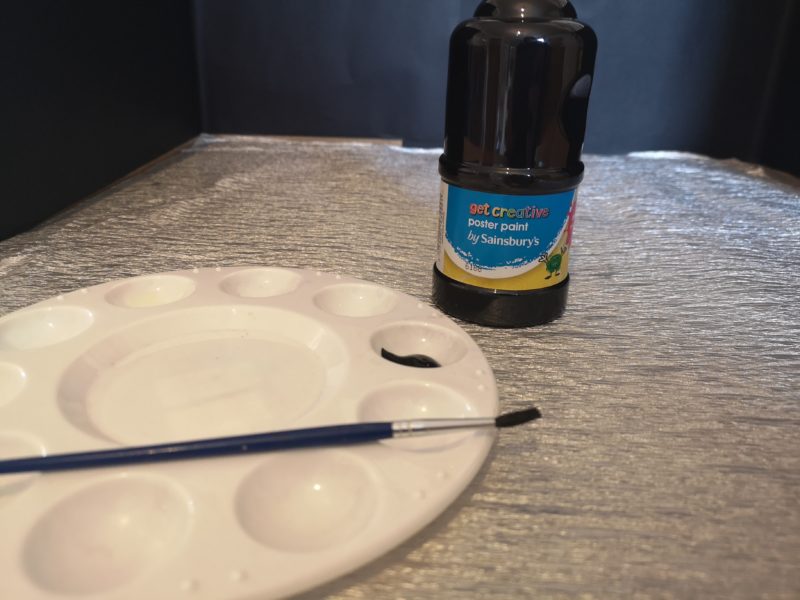 To make the black background a bit more colourful and interesting I found some free printables online from ‘From ABCs to ACTs‘ and ‘Picklebums‘. Both gave me brightly coloured planets and fun characters like an astronaut and an alien. These were again easily stuck on with double sided tape. 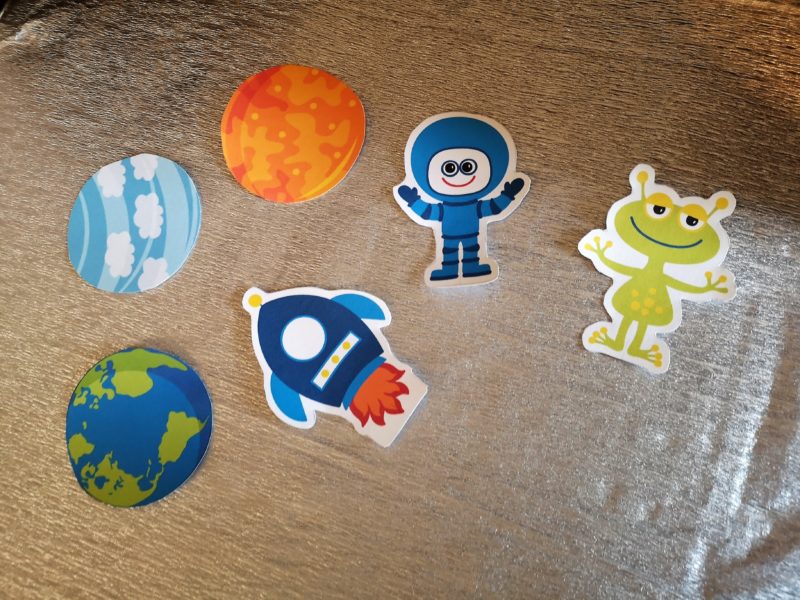 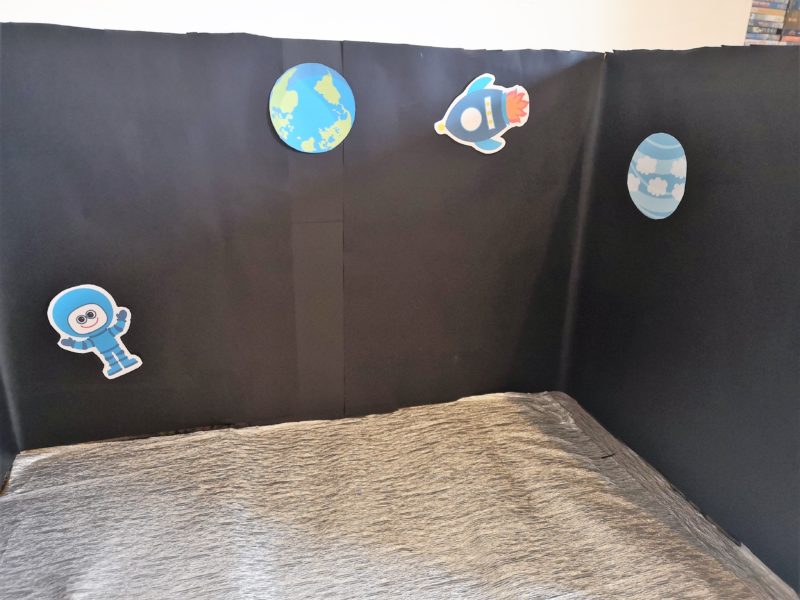 To help fill up the sky a bit more I used some of the glow in the dark stickers we were sent. These, along with the printables made the background interesting without it being overcrowded or distracting. I wanted something fun but not something that would distract from the larger area of the playset. 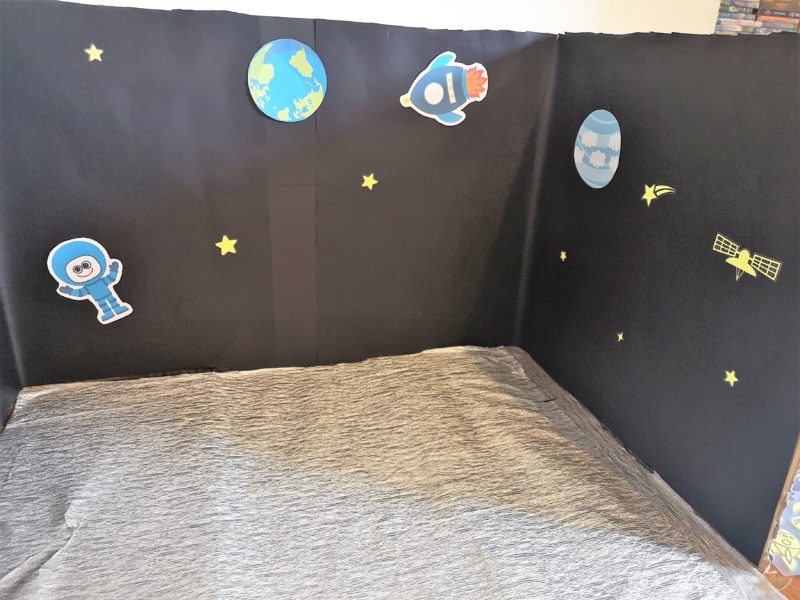 At this point I hadn’t planned on doing anything else but the base of the playset looked really flat and I knew it needed something extra. I wanted to create a few fun places for characters to be able to hide so I cut up some toilet rolls and covered them in tin foil. I glued these to the base with some superglue but you could also use them as movable piece. 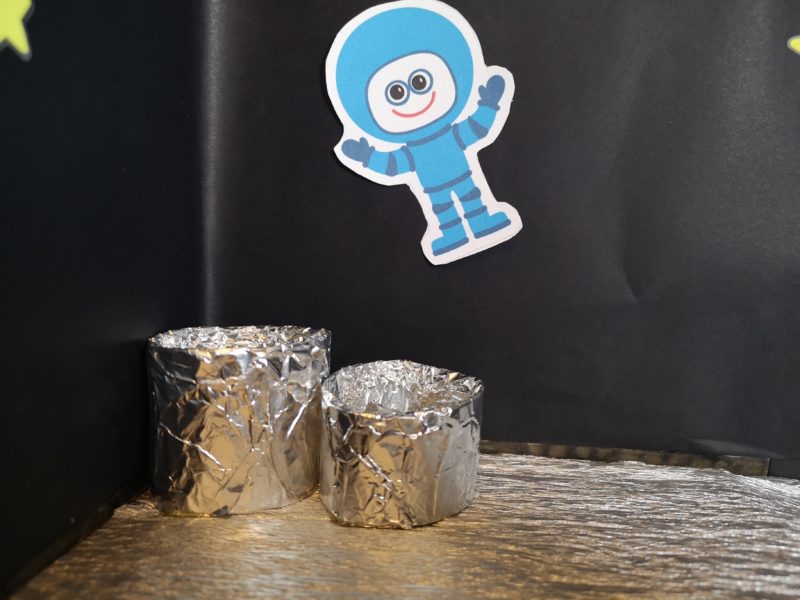 Overall, I’m really pleased with the playset I created ready for the PJ Masks Super Moon Adventure toys. It’s a really simple playset that absolutely anyone could put together themselves. I am not a crafty/ Pinterest parent by any means but this is something Erin would be able to use for many different things. 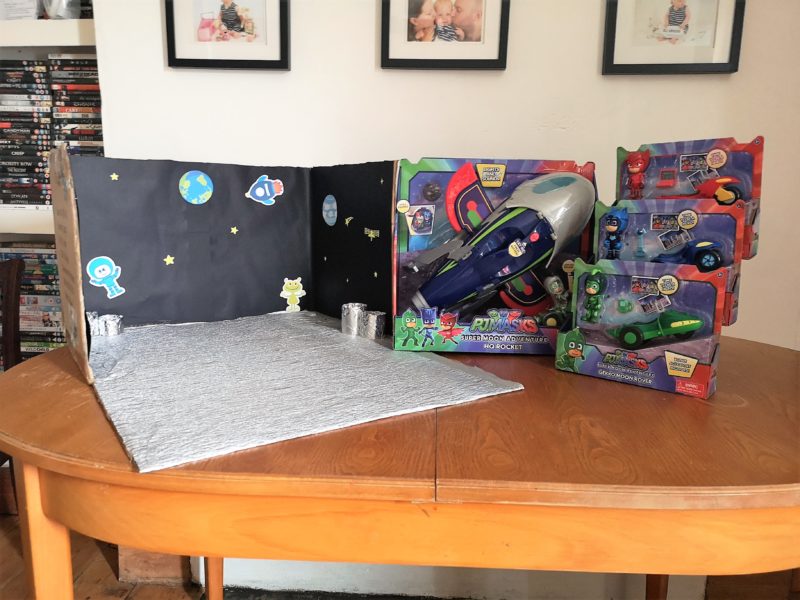 By keeping that extra piece from the cardboard box it gave the extra space needed for the Super Moon Adventure HQ Rocket. At nearly 36cm high and 39cm wide this is a large toy so the space was necessary! 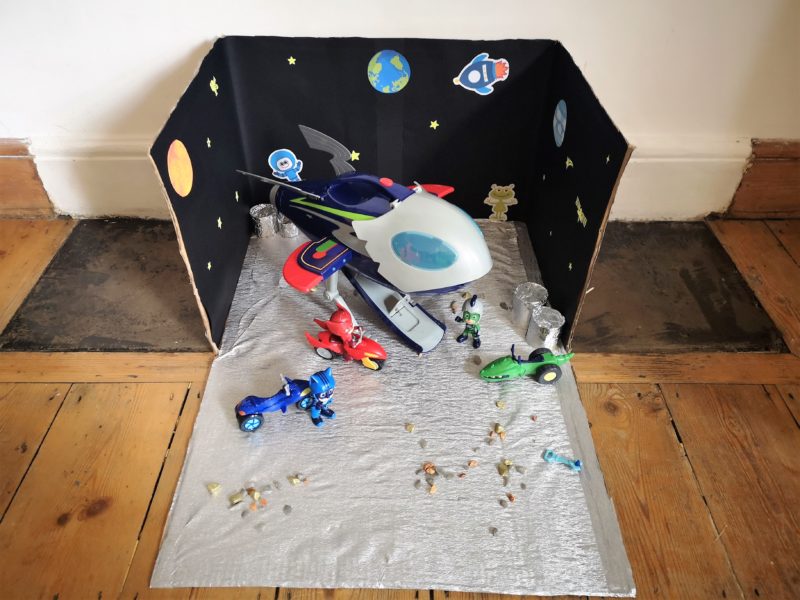 The Super Moon Adventure HQ Rocket comes with an exclusive Gecko figure and Space Rover vehicle and it also has working lights and sounds. 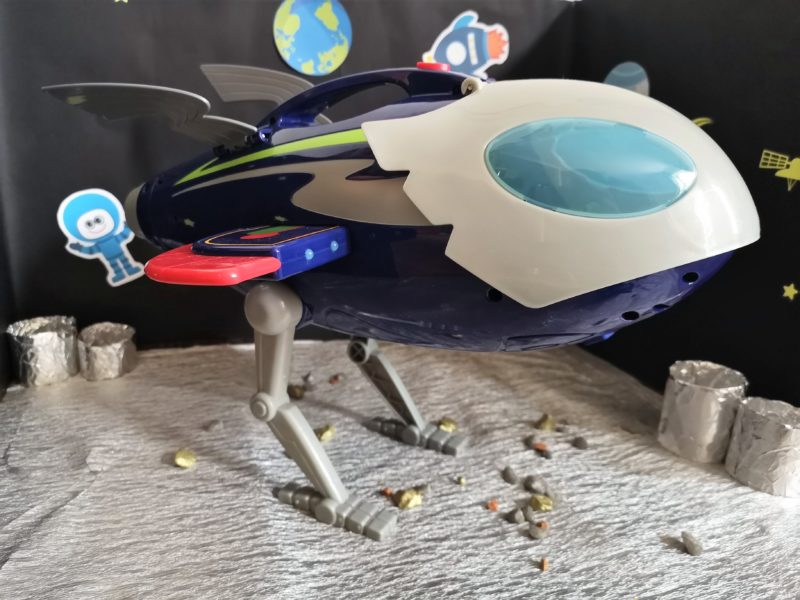 I really loved how much there was to do with the Super Moon Adventure HQ Rocket. The cockpit, although a bit of a tight fit, has colour coded seats so that each of the 3 characters can sit inside together. It took me a little while to figure out how to fit them all in properly but the trick is to click their legs into the seats rather than their bums! I don’t know that Erin could do this herself so it would have to be something for me or John to help with. It would have been nice to have had a little bit of extra room just to make this easier. 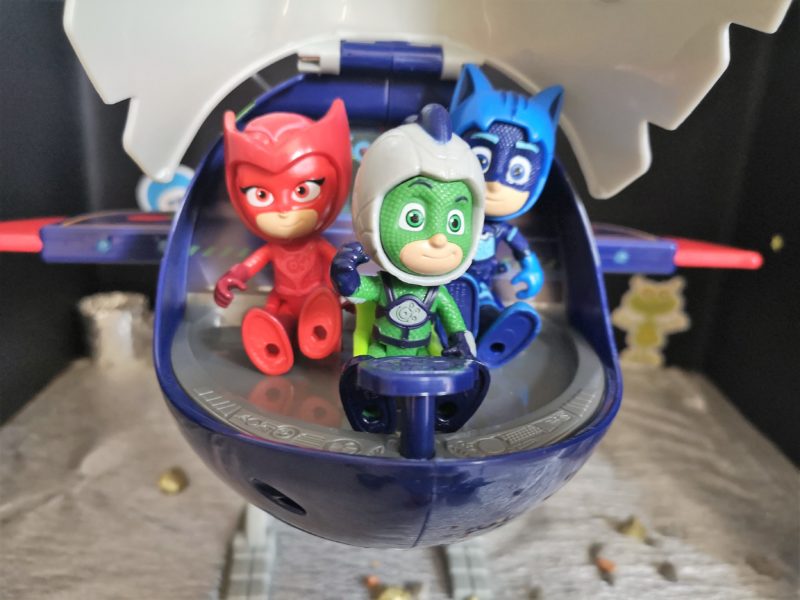 The ramp on the underneath of the rocket can house one of the Space Rovers and it’s rider. With the touch of a button the ramp is released and either Catboy, Owlette or Gecko can come zooming out to save the day! When you add in the lights and sounds by pressing the button it makes for a very exciting play time. 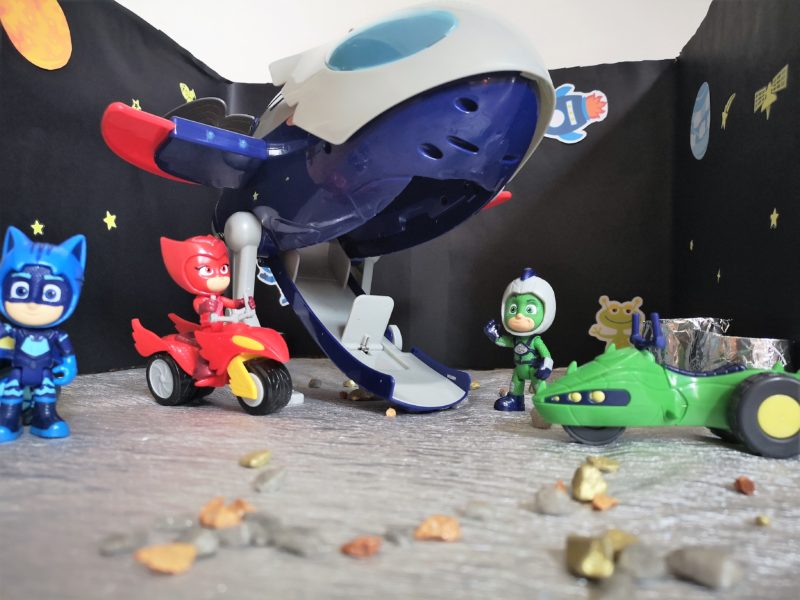 The Super Moon Adventure HQ Rocket has a lot going for it but it’s unfortunately not perfect. The legs do come off quite easily which can be quite frustrating especially if you have a heavy handed child. The legs are supposed to fold up for when the rocket is in ‘flight’ but they sometimes just fall off instead. 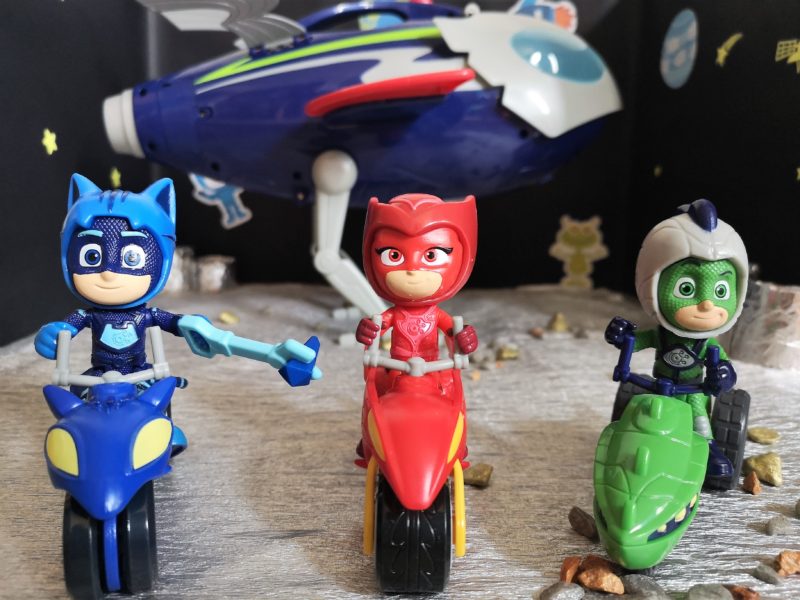 Although the rocket comes with Gecko it’s nice that we now have the full set of main characters to play with. For a playset such as this, with a rocket to seat all 3 characters I think they are all needed. You can buy each of the characters separately with their Space Rovers and they each come with an additional item as well.

I really like that the characters are able to actually hold on to the handlebars of the Space Rovers so it looks like they’re really riding them. The arms and legs are all movable too so you can put everyone in fun and exciting situations. 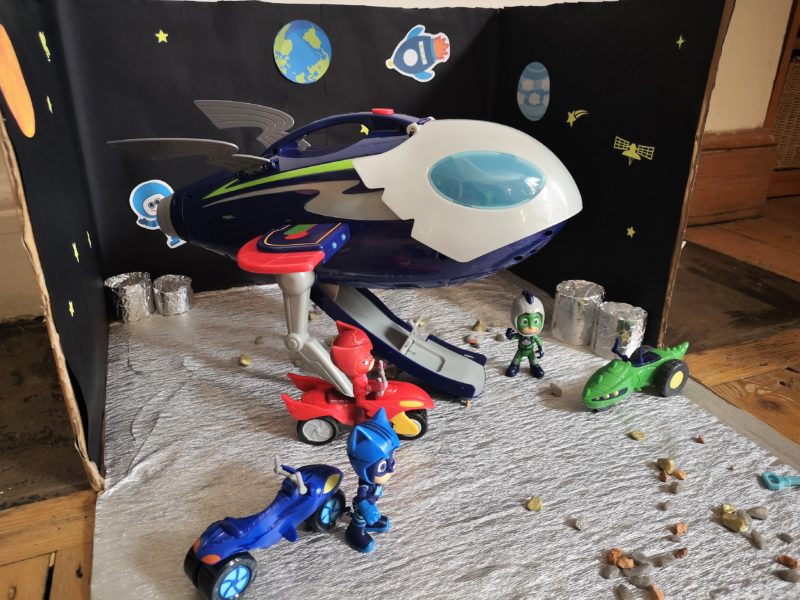 I’m really glad that I put together the space playset to go with these toys. It really adds something extra and it helps Erin to use her imagination a little bit. As I left the base quite plain lots could be added to it like the moon rocks I used or craters etc.

The PJ Masks toys can all be purchased at Argos! 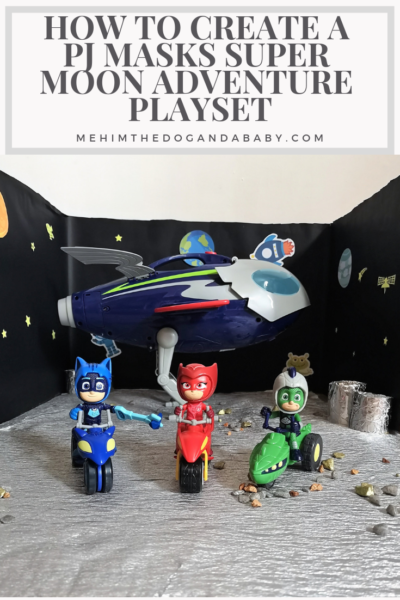