This year I think we have been very lucky to have some wonderful days out, over summer especially, but we’re always looking for someone new. On a recent morning out with my sister and brother in law we chose the Priory Maze And Gardens in Beeston Regis, Norfolk to visit. It’s somewhere I’d sort of had in mind for a while but never got round to going.

Priory Maze And Gardens is in the middle of Sheringham and West Runton. On the day of our visit my brother in law drove and there was plenty of parking available. As non-drivers, we could still get here ourselves by getting the train to Sheringham and then taking a 15 minute walk there. 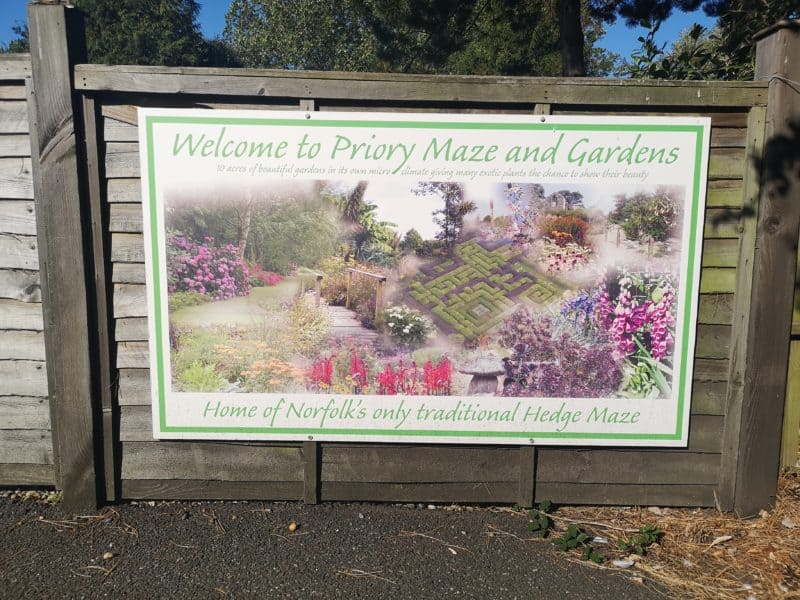 At the time of our visit the entrance fee was £6.50 for myself and £4.50 for Erin. If you are local and plan to visit a few times during the season then season passes are also available. There was a small sign on the entrance saying that we had to pay inside the cafe which wasn’t an issue. However, we arrived at around 10:30 on a quiet Saturday but I imagine if you have to do this in the summer then it could get a bit awkward if the cafe is busier.

Just around the corner from the entrance is the maze. According to the website, this is Norfolk’s only traditional hedge maze! The maze isn’t massive, which was something that made me want to visit this place in particular. I know that might sound a bit weird but Erin had never done anything like this before and I didn’t know what she would make of it. The size of the maze is great for younger children and there are still plenty of ways to get lost in there (we all got lost)! In the middle of the maze there is a sort of look out area and I loved this part. Being able to look over the whole maze was great. 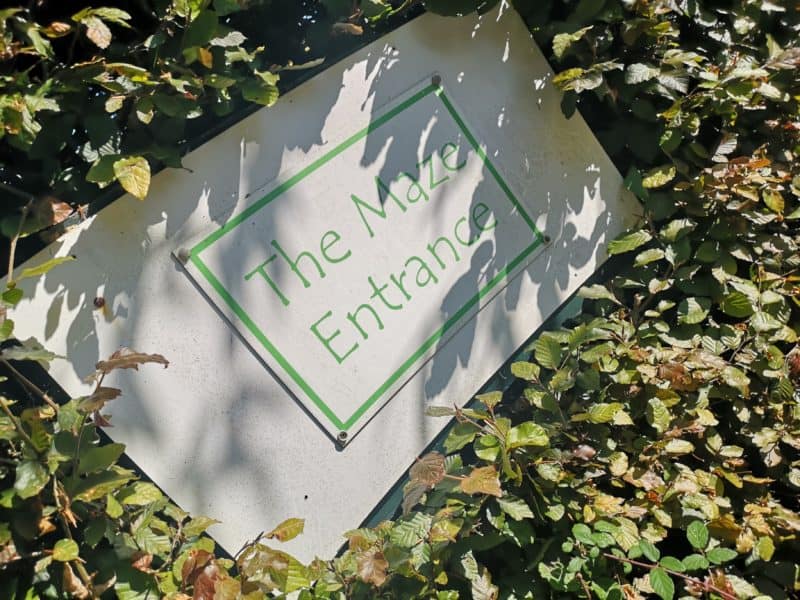 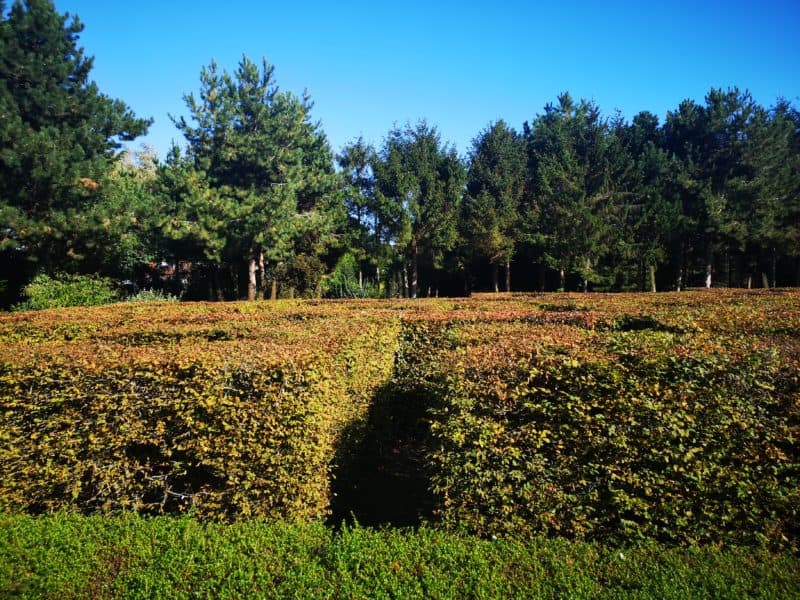 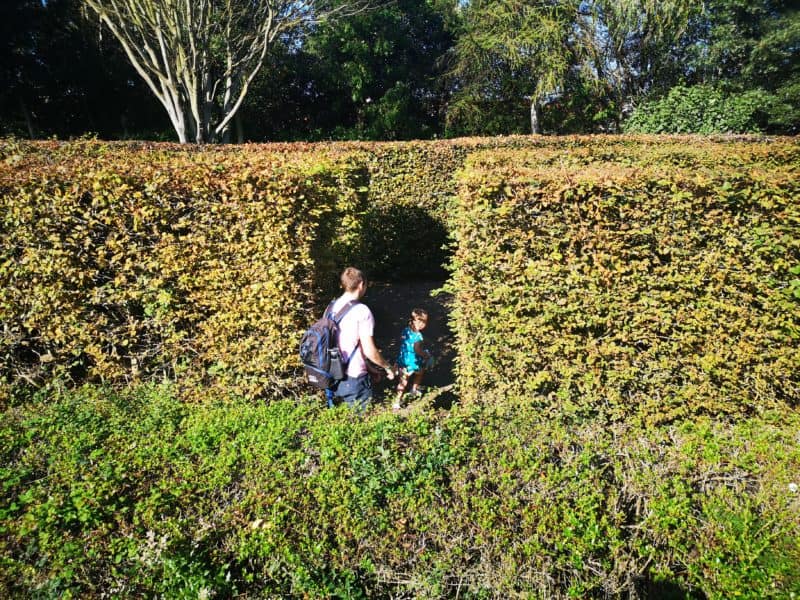 The maze isn’t the only thing here though as there are quite a few different gardens to explore. On the day, Erin was in a bit of a ‘go everywhere super fast’ kind of mood so I would have liked to have had a bit more time to look around. However, around the gardens there are loads of interesting things to find. Ella’s Hut was a nice shaded place if you wanted to sit and have a drink or some food on the way around. We all also really loved finding a little wooden hut. The little additions of things like wooden owls, men on bikes made from plant pots and other figures really make the gardens magical and it helps to have things to look at for children. 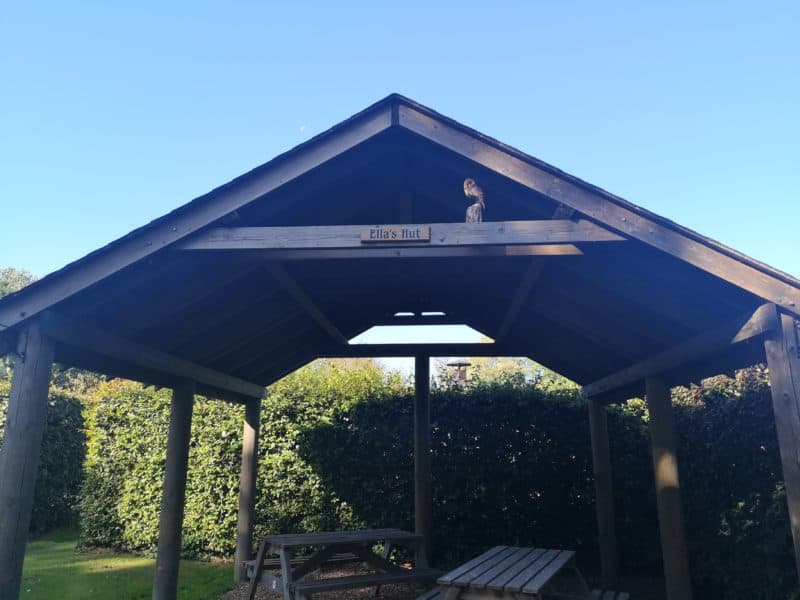 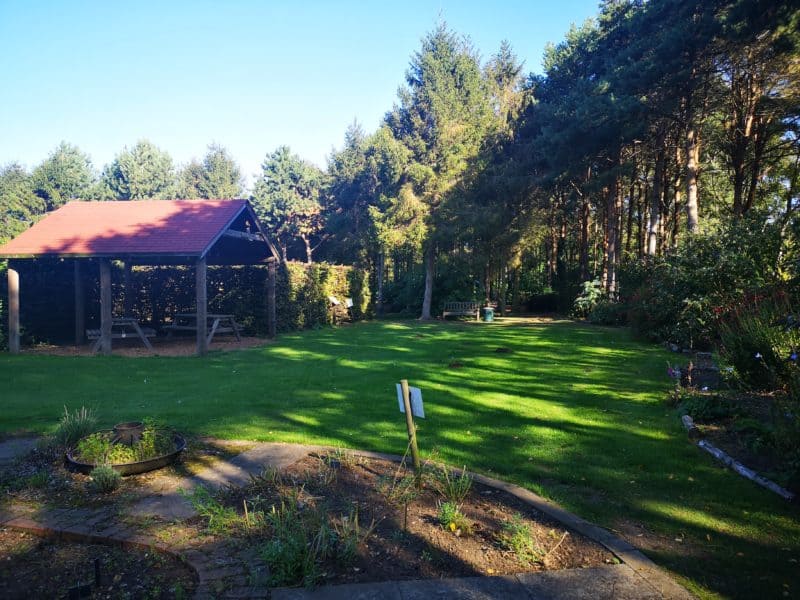 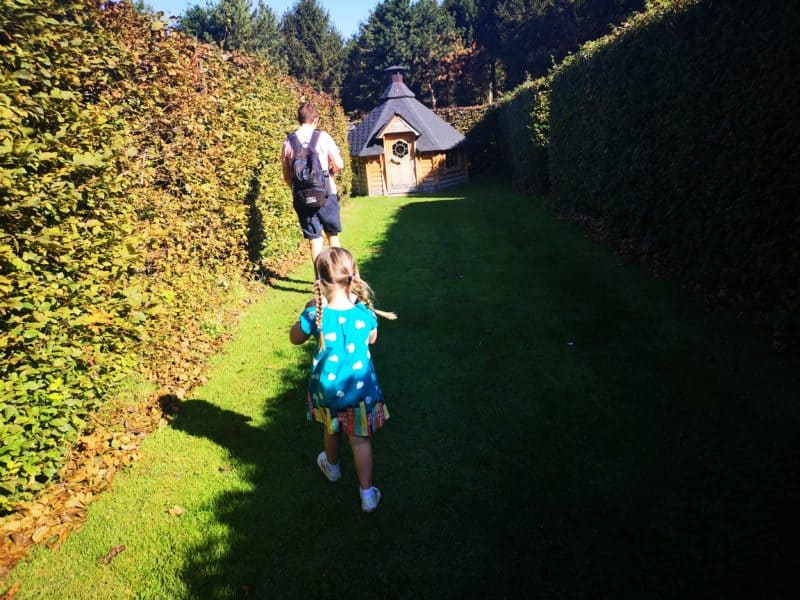 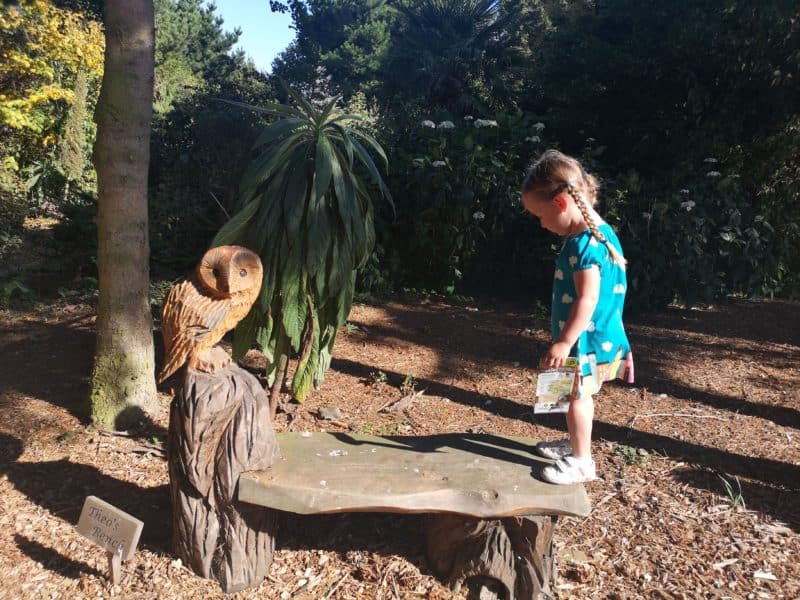 Not only are there the maze and gardens to explore but there is also a fun play area for children. As soon as Erin spotted this off she ran to go and find it. Erin’s favourite thing about anywhere we go is a park so we spent quite a lot of time in this area. There is one big piece of equipment so it’s not the biggest and most adventurous of areas but at the time, Erin had it to herself so she was more than happy. I can imagine this being really busy in the summer though when the place will be busier in general. 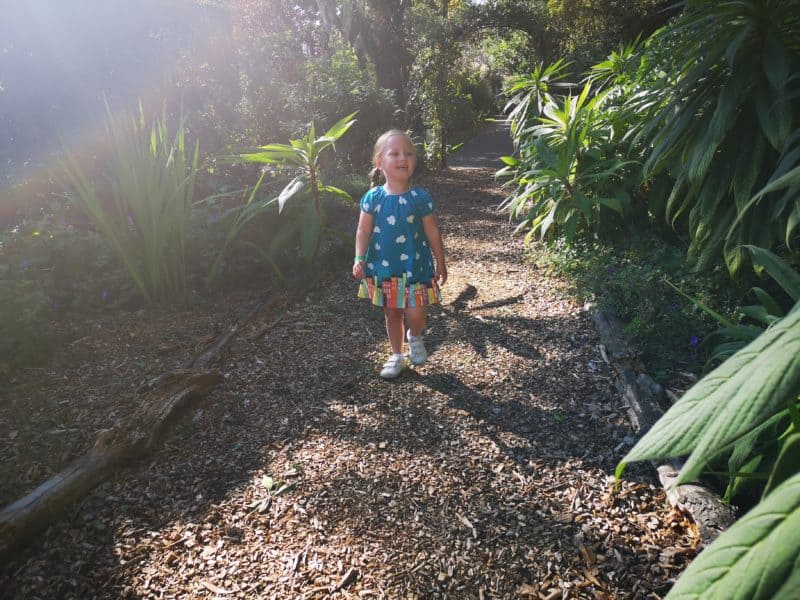 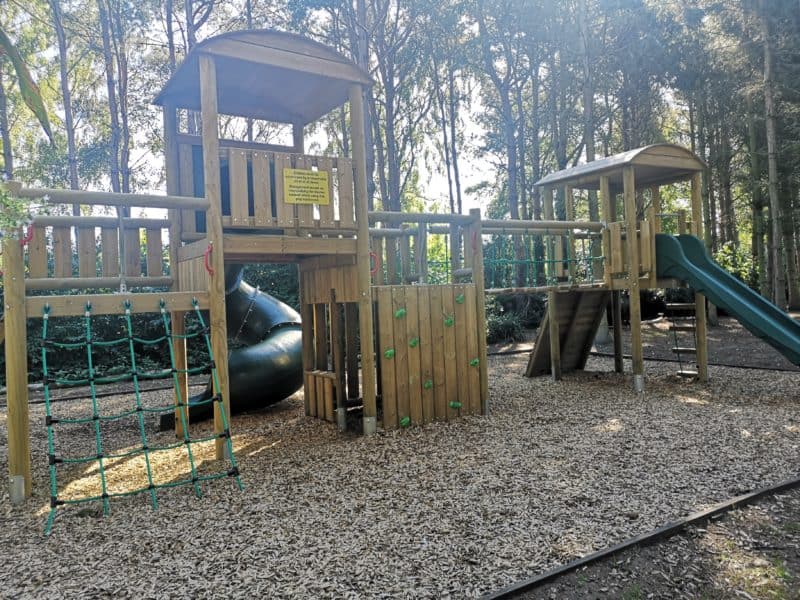 Off to one side there are little streams and ponds with bridges of all kinds to cross over and this was my favourite area of Priory Maze And Gardens. There was quite a lot of wildlife out and about during our visit and this was such a relaxing place to look at the dragonflies and butterflies. There was also quite a large area of lovely grass which was an ideal place to sit with a picnic or for children to have a run around. 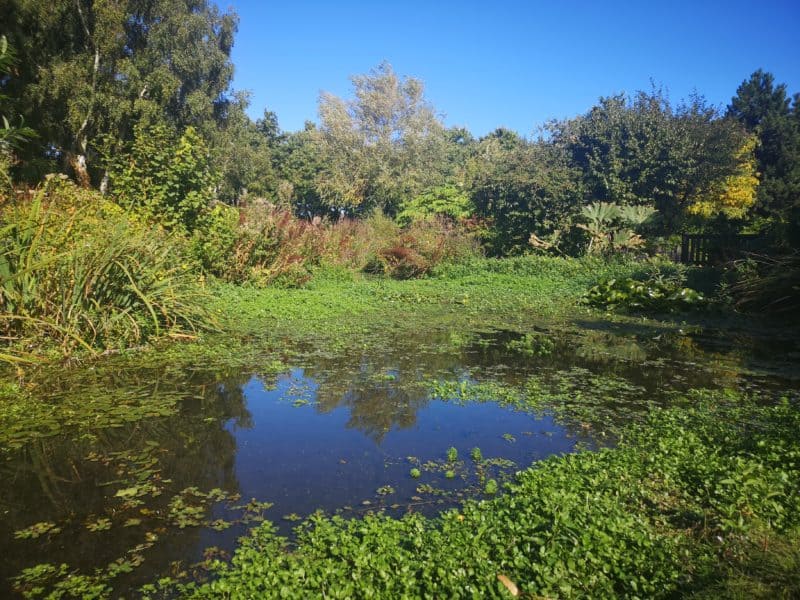 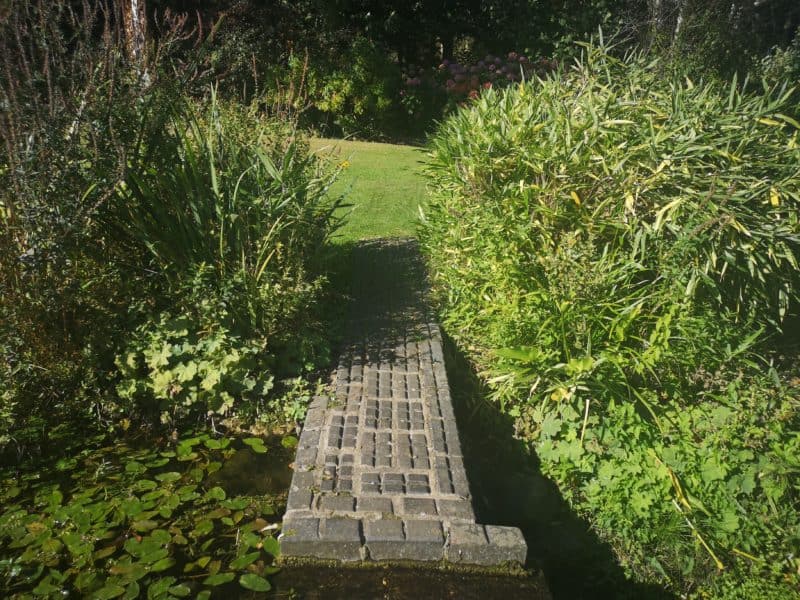 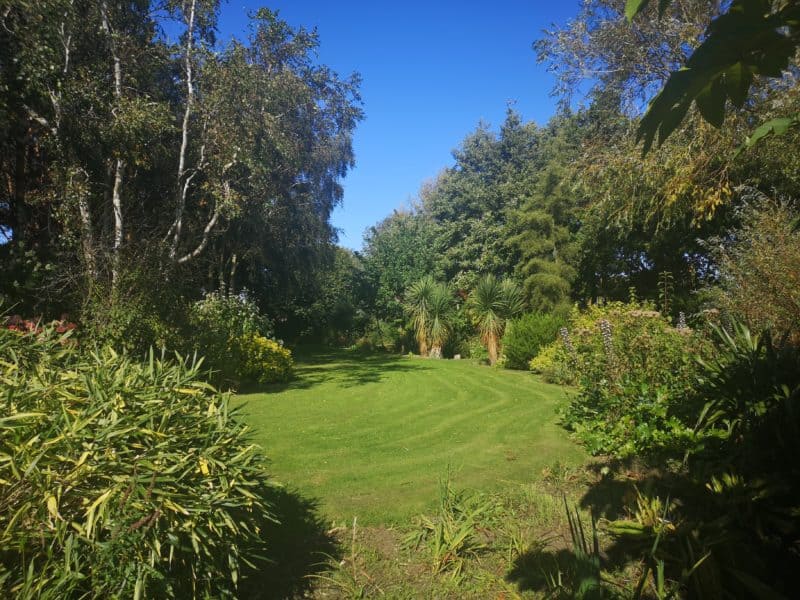 This area of Priory Maze And Gardens also had some pond dipping equipment. Erin was really excited about this as she really wanted to catch some creatures and to look at them in the little trays. Unfortunately there wasn’t much in there on our visit apart from some snails but we still managed to have some fun trying to find something. I know that if we went back this is something Erin would like to do again. 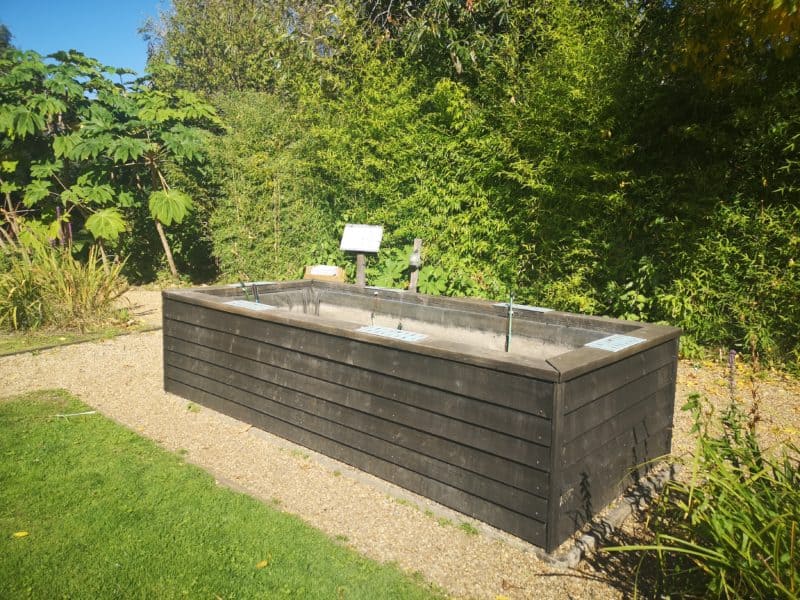 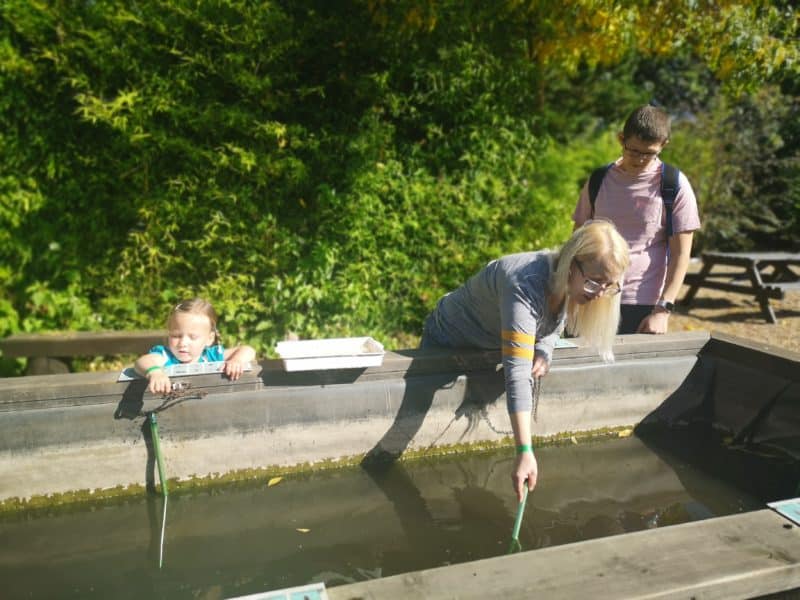 At around 12:30 we headed to the cafe as we were all getting a bit hungry! We were really lucky to get a table inside the cafe as most of the tables were reserved. I think this is quite a popular place to eat so it might be an idea to book a table before you visit if you can. There are plenty of seats outside though so this is also an option if inside is full.

The children’s menu was really reasonable but Erin really just wanted some chocolate cake. Unfortunately there wasn’t any on offer so she made do with chocolate ice cream instead. The full menu had lots of options from sandwiches to hot meals and I thought the prices were mostly very reasonable. We didn’t have full meals but instead just opted for skin on fries, cheesy chips and one of the vegetable soup specials along with a couple of drinks. We saw some of the main meals come out though and they looked absolutely delicious. Some of the things on the menu were expensive though such as a the desserts at £5.95 each. Cakes were available at £2.50 a slice which was much better but the choices weren’t very child friendly on the day. 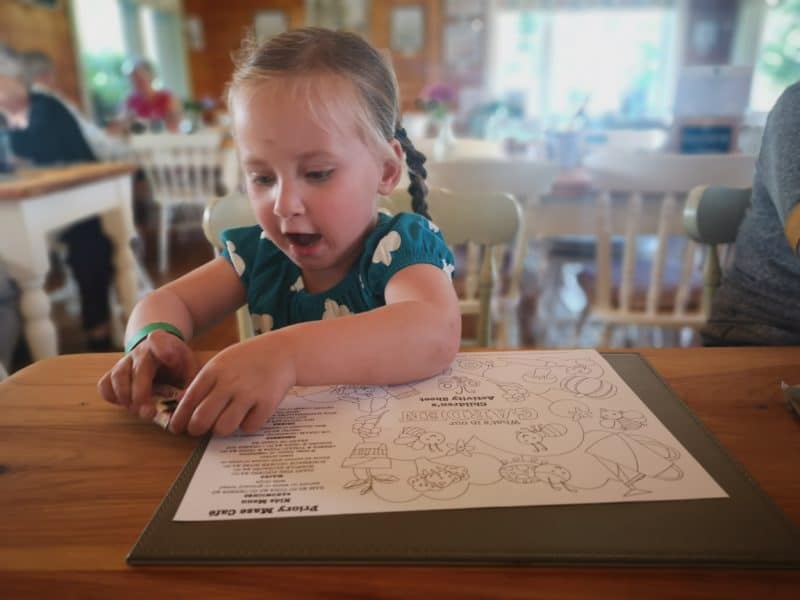 Overall, we had a lovely morning at Priory Maze And Gardens and I would definitely go back. It would be nice to be able to spend longer there considering the entrance prices so I think next time we would plan to have lunch in the middle and then go back to look around again. We are actually camping just down the road next August so I think this will be on our list for another visit! 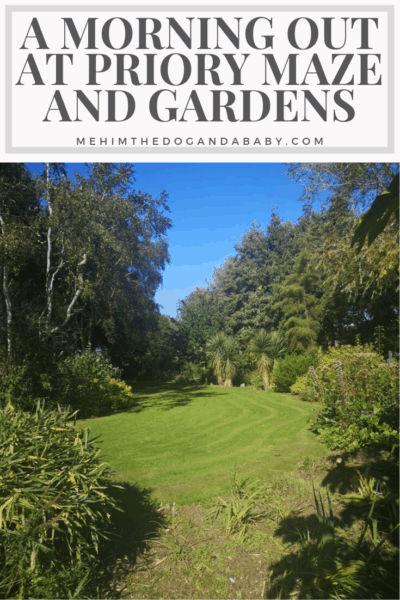 9 thoughts on “A Morning Out At Priory Maze And Gardens”