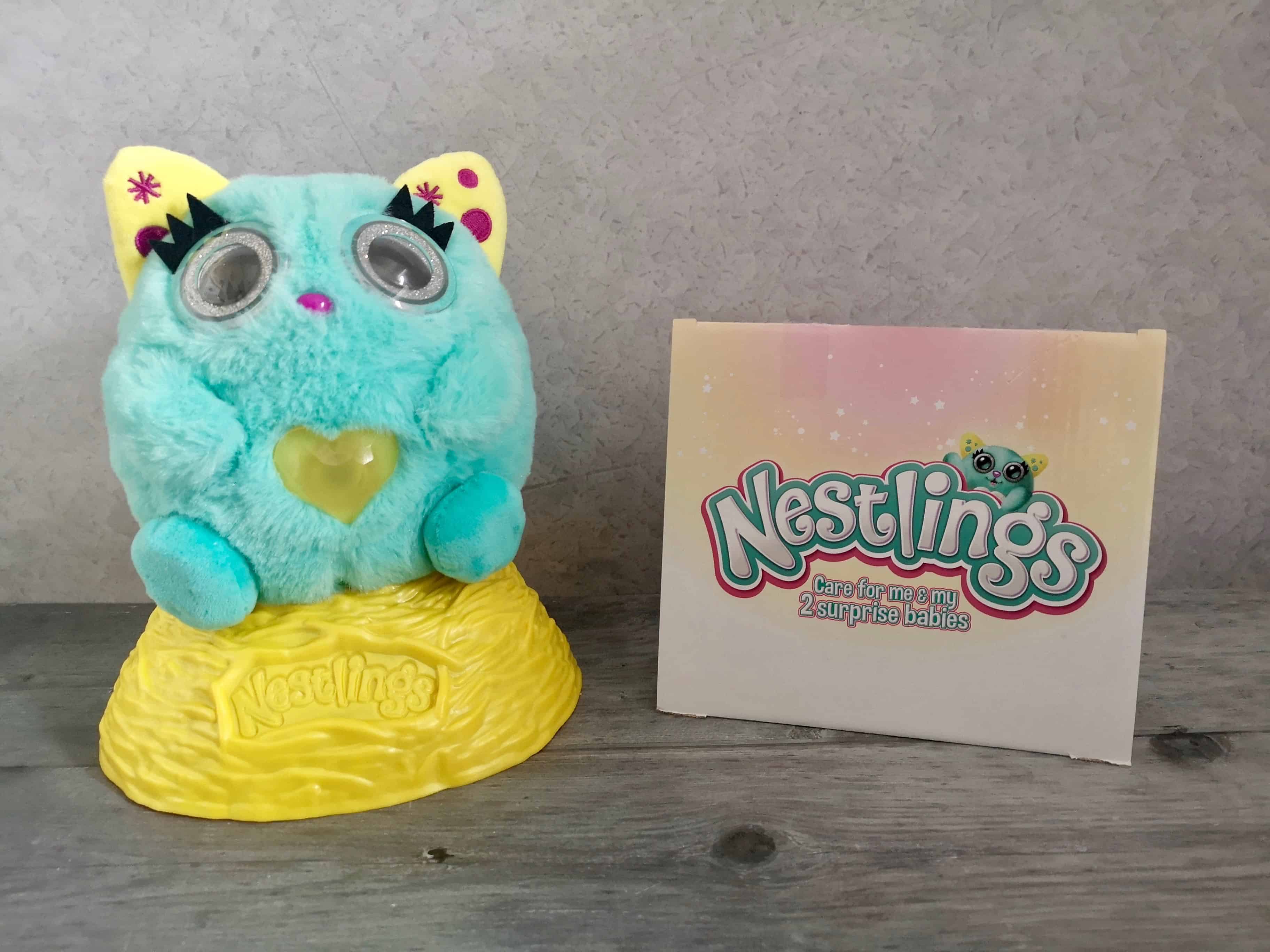 Recently Erin received a very exciting delivery of one of the brand new Nestlings toys. As soon as she saw the box she was incredibly excited and couldn’t wait to see what it could do.

Before we could start playing though we had to pop in some AAA batteries as they don’t come included, which, for the price of the toy I think they should be. However, we do always have some at home so it wasn’t a big deal. I know that if Erin had seen it and wasn’t able to play with it straight away there would have been tears! The battery area can be found on the back of the Nestling and it needs unscrewing first. This area is quite small and it was quite difficult to get the batteries in because there just wasn’t a lot of space. 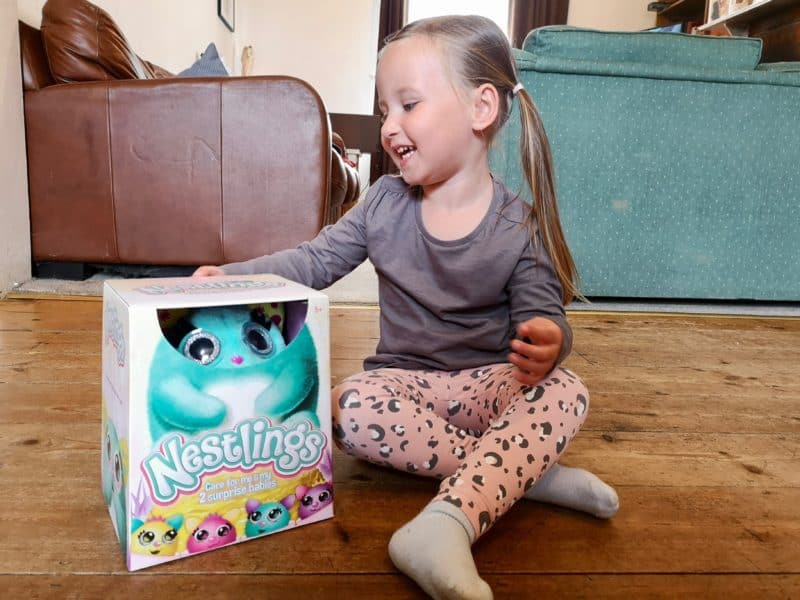 If you haven’t heard of Nestlings before and don’t know what they do, here’s a basic explanation. Nestlings are an interactive toy that you can play with, love and care for by paying attention to the colour of its eyes. You can play with your Nestling until the adorable babies arrive and then play with them too! 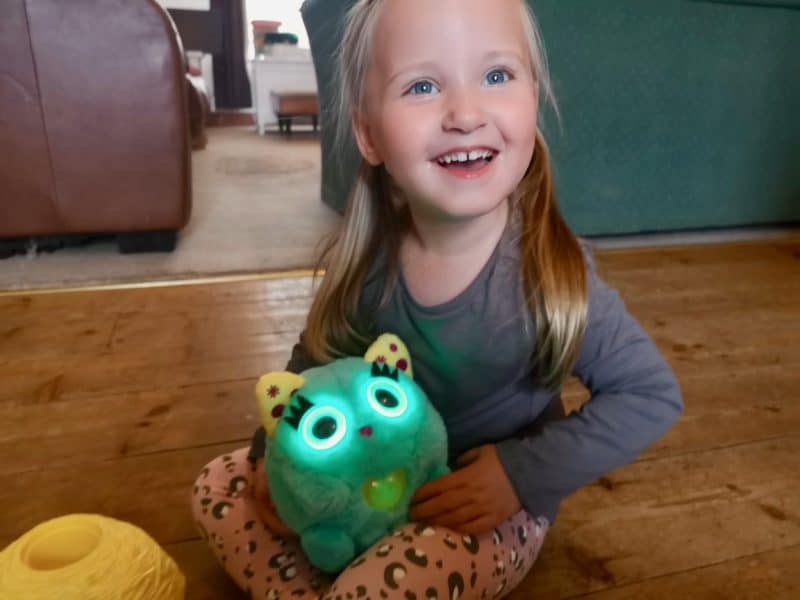 The Nestling lets you know how it’s feeling when the colour of it’s eyes change for example, red means that it’s not very happy. Different colours mean different things such as it might be hungry or might just need a hug. I think this is a really nice, easy way for children to know what they need to do. The different things are detailed in the instruction manual but it would be a nice idea to have them on a handy card or something so you don’t forget. 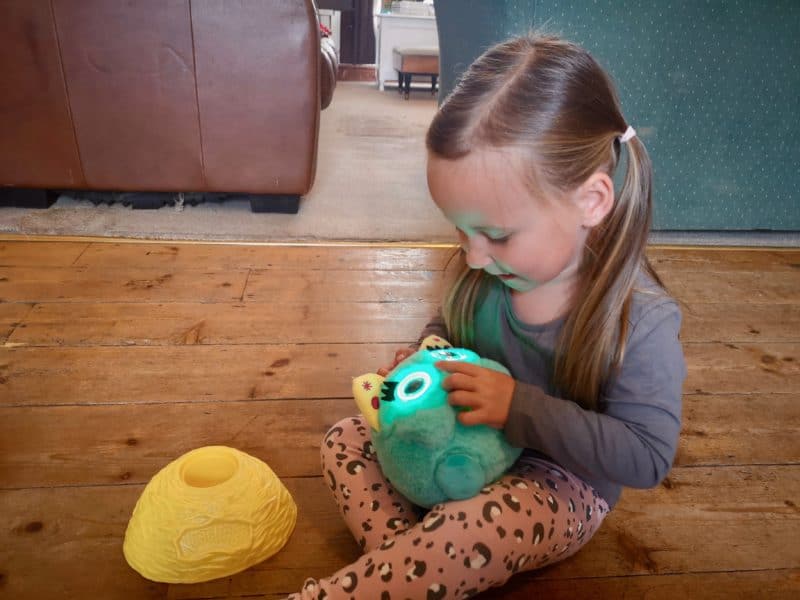 Erin really loved figuring out what to do with her Nestling. She loves the different noises it makes and being able to say ‘I love you’ but her absolute favourite was making the Nestling do beat boxing. I have to say, this particular feature is great and it’s really different. Erin tends to try to break dance while we do this! 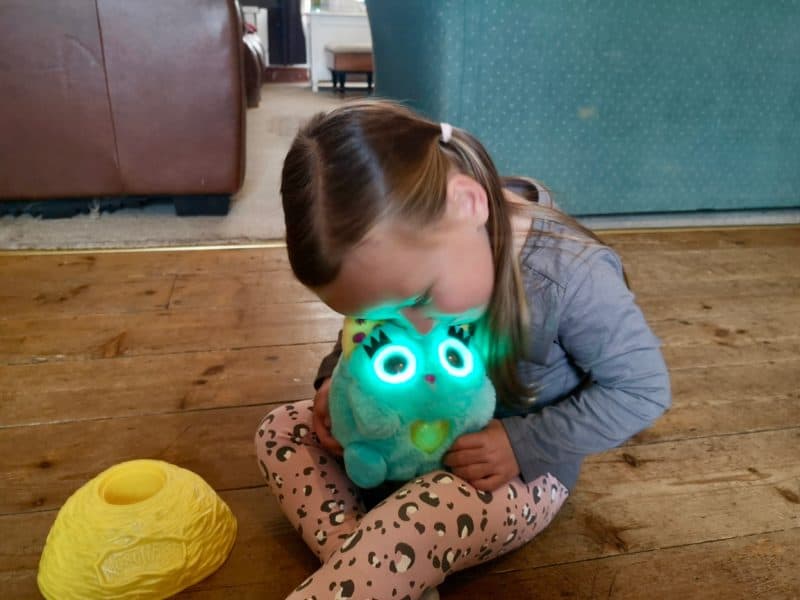 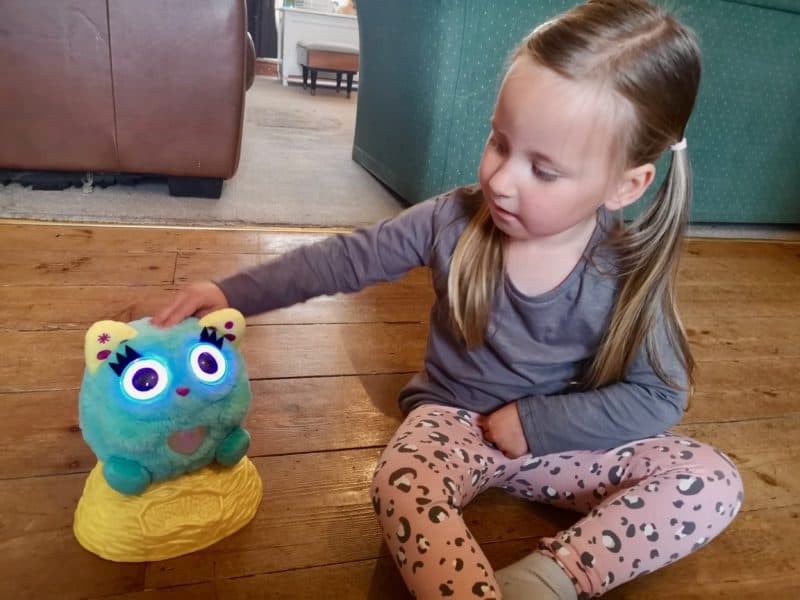 Before the Nestling has it’s babies you have to play and care for it for a certain amount of time. When the time comes though, the eyes light up in rainbow style and the heart of the stomach lights up too. When this happens, it’s time to put the Nestling back on the nest ready for the babies to come. The babies come in small plastic balls which can then be cracked open and they sit nicely in the hole in the nest. 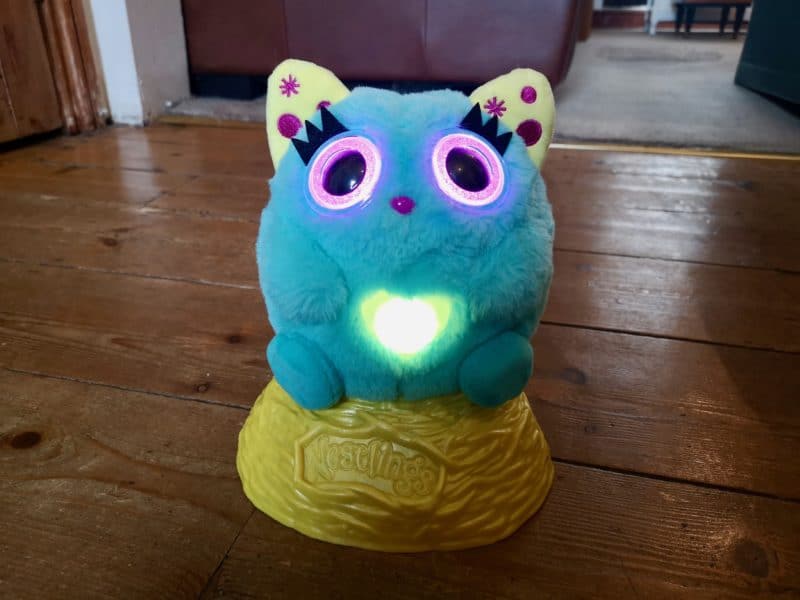 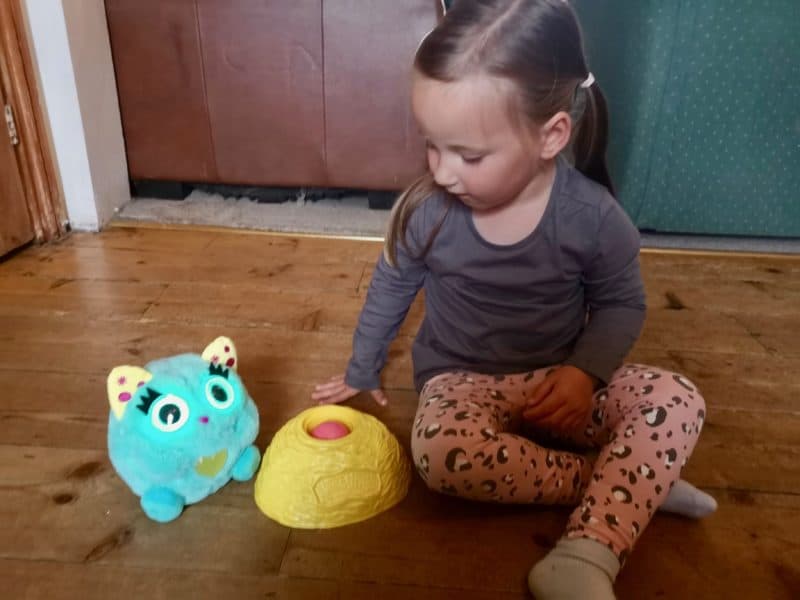 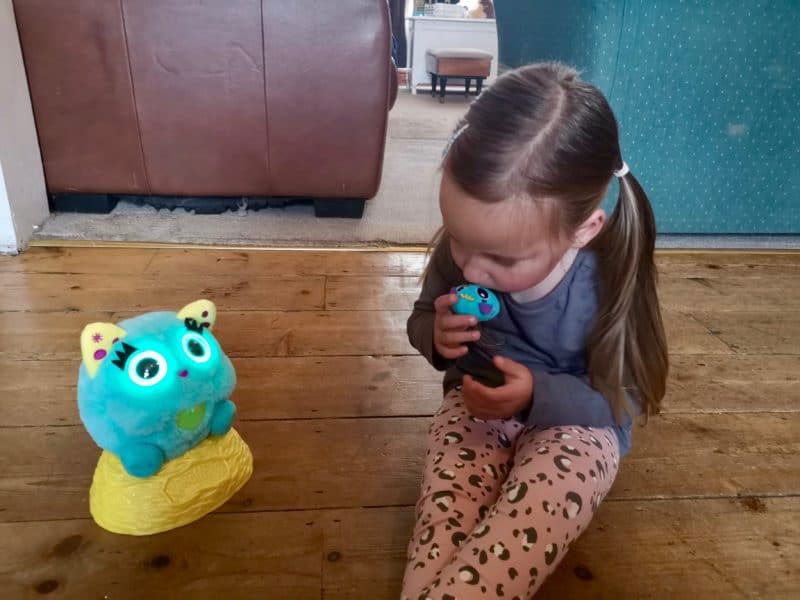 The great thing about this Nestlings toy is that even after both babies have arrived there is still so much to do. The big Nestling has different points where the babies react such as the nose and the feet. Also, if you want to you can reset the Nestling and it will forget that it’s had a baby! This is really easily done by turning it upside down and pressing the nose and head buttons. The underneath of the Nestling then opens up and you can pop the babies back inside (making sure they’re back in the balls they came in). Now, you’re ready to start the process again! 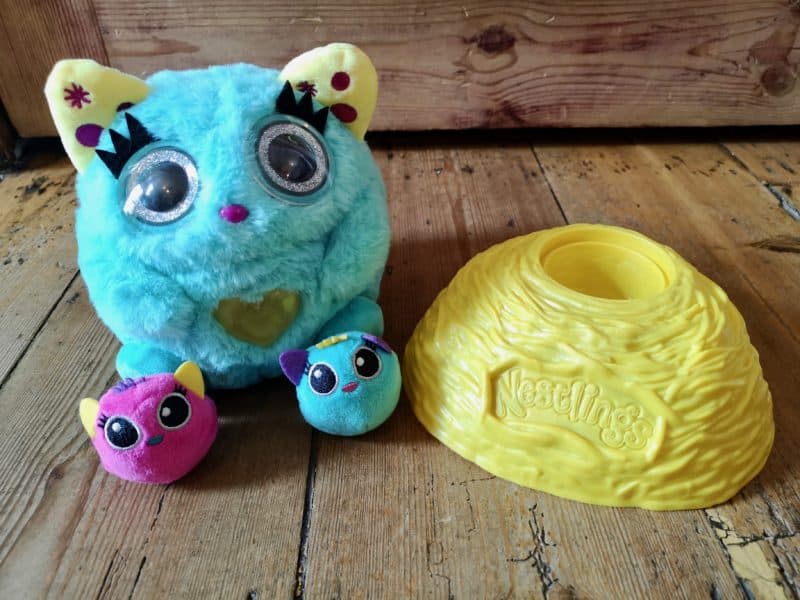 Erin has absolutely loved playing with her Nestling and has done so every day since we got it. The features are quite basic but it’s nice to have an interactive toy that can be reset so it can be played with over and over again. 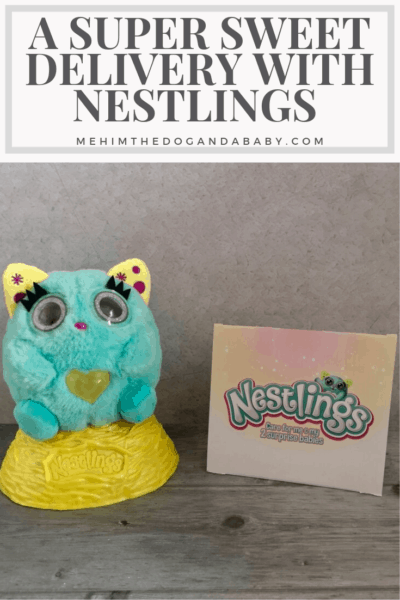 6 thoughts on “A Super Sweet Delivery With Nestlings”