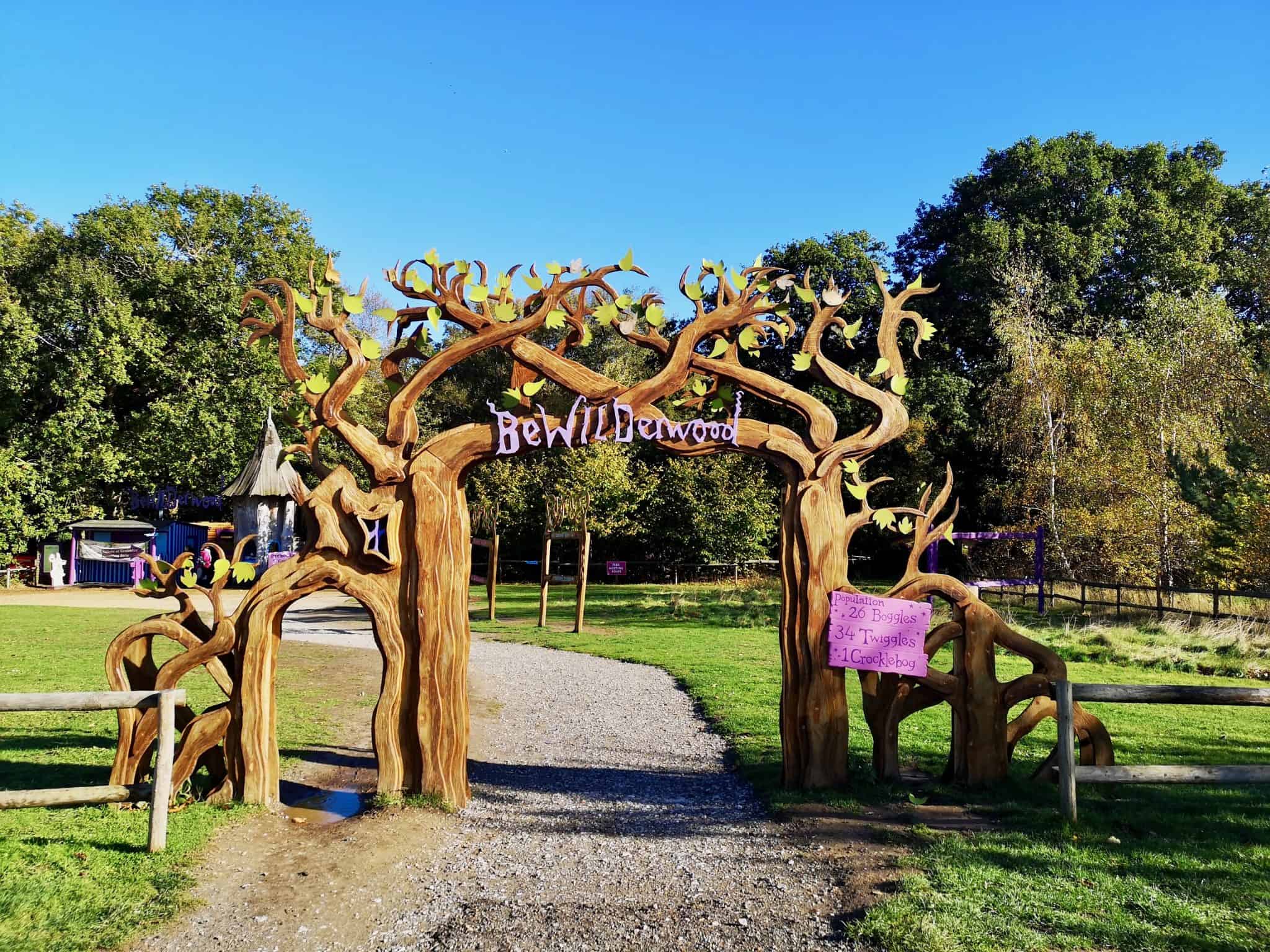 Towards the end of October half term we went for a family day out, along with Erin’s Auntie and Uncle, for The Glorious Glowing Lantern Parade, which ran until 31st October. 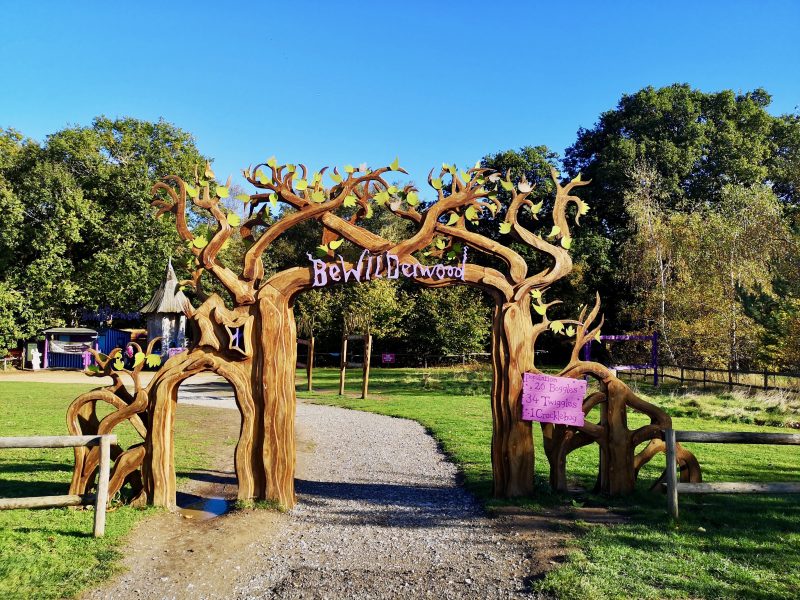 We got the absolute nicest welcome on the board as you enter BeWILDerwood and it was very much appreciated. John noticed first and after I saw the blog name on there I was even more excited. 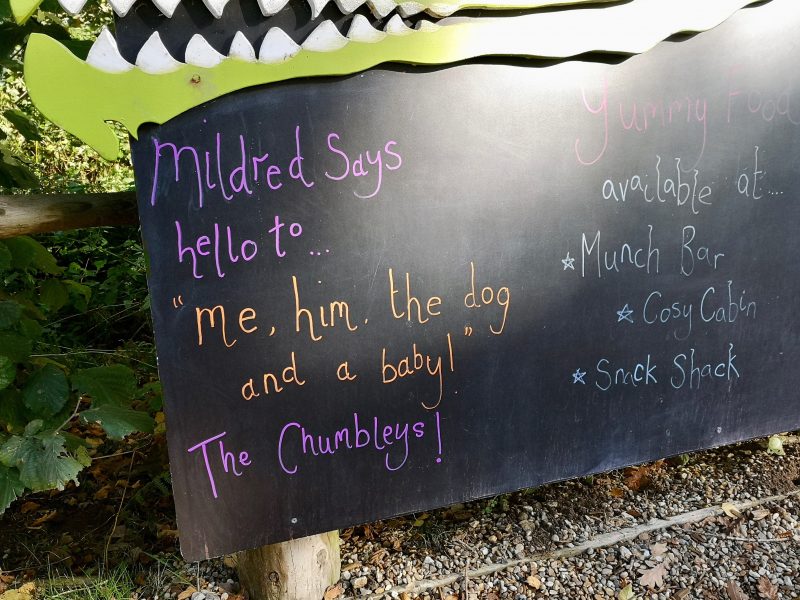 BeWILDerwood have loads going on all day on top of the play and explore areas. There was an informational board close to the entrance showing what was on where and when. I actually took a picture of this just so I could look back throughout the day. All of these activities are included in the entrance price at BeWILDerwood and it’s nice that there aren’t any hidden surprises to pay for later. 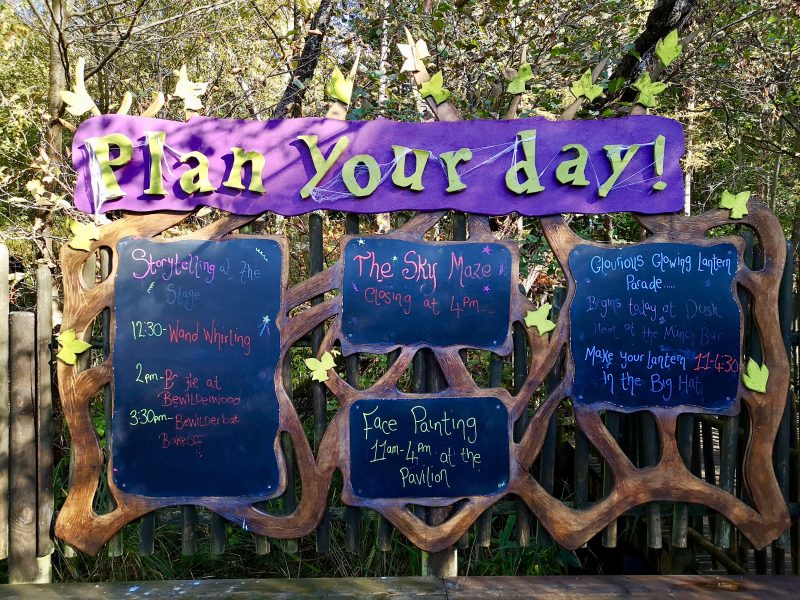 We arrived at BeWILDerwood at around 11am, an hour after it opened. We knew before our visit that boat rides were available but we quickly saw one of the boarding areas and it was very busy with a queue already. So, we decided to head left instead of right and when you reach the Snack Shack, you’ll find another boarding area. The first boat trip here wasn’t until 11:30 but we hung around and was able to catch the first boat of the day. 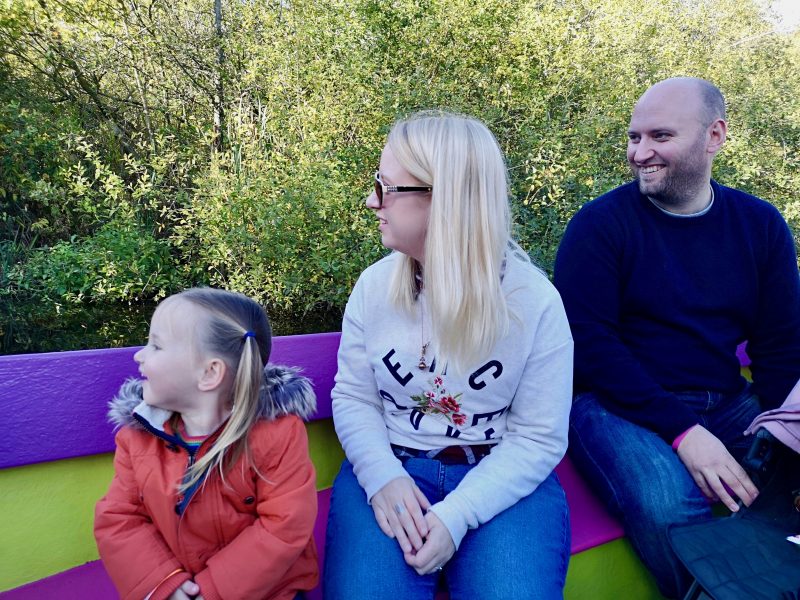 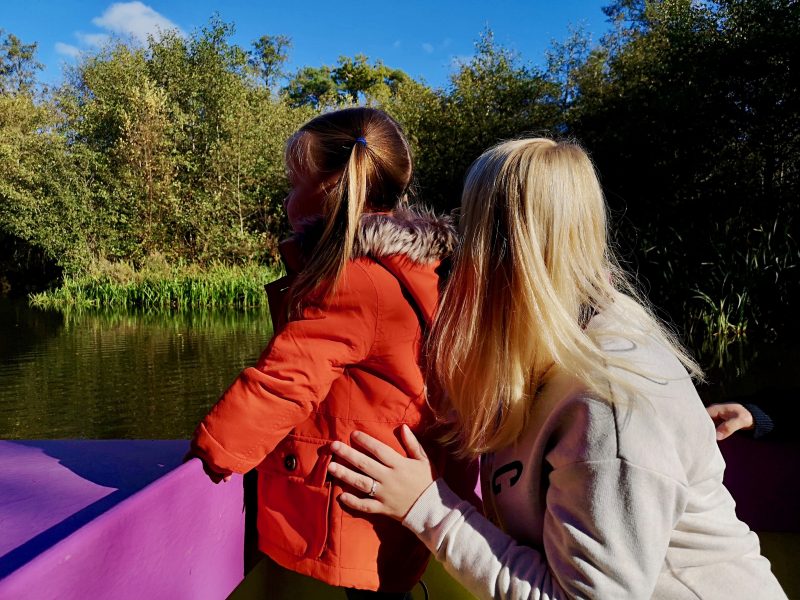 This was Erin’s first time on a boat and she was incredibly excited. I should mention here that the boats are equipped to be able to take pushchairs which for us was a massive bonus. The boat takes you along the Scaaaary Lake and you’re told all about the inhabitants of BeWILDerwood including Mildred the Crocklebog. Erin wanted to look at absolutely everything on our way and BeWILDerwood have added so many little details. I think I was just as impressed as Erin was.

After our boat ride we headed over to the Tiptoe Valley where Erin was really let loose. Instead of starting small with the area designed for smaller children Erin wanted to ‘go in the sky’. Of course, she wanted to go on the biggest thing she could see and well, I wasn’t going to be the one to stop her from trying. 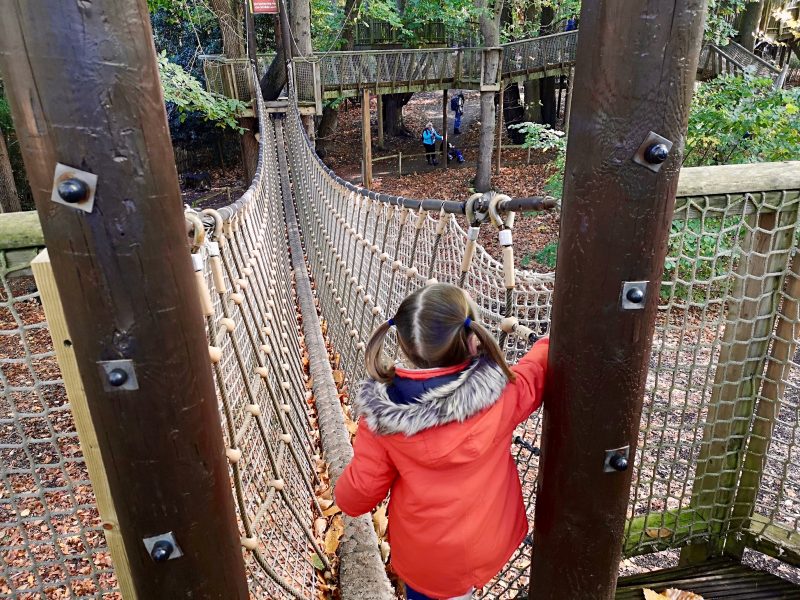 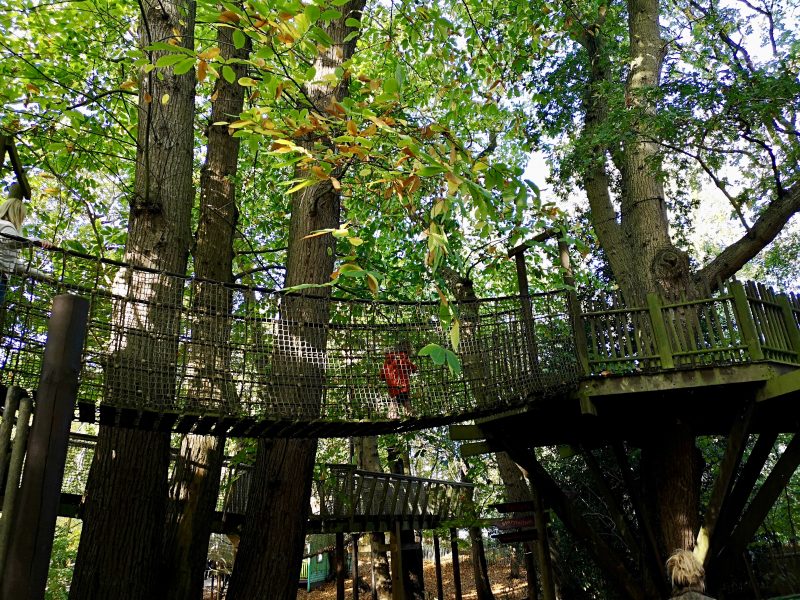 We learned that Erin has no fear whatsoever and I was so, so proud of her for just getting stuck in. I went up and explored with her. John said he was surprised I did but I figured if a 2 year old can then I most definitely can. I had the most fun with Erin and I loved doing something different with her.

Another of the free activities is face painting. When we arrived there was a bit of a queue but it went down very quickly. Erin had only ever had her face painted once before and she doesn’t remember it so again, this was something for her to get really excited about. Erin sat so well while she had stars painted on the side of her face and we all joined in and had something done too. 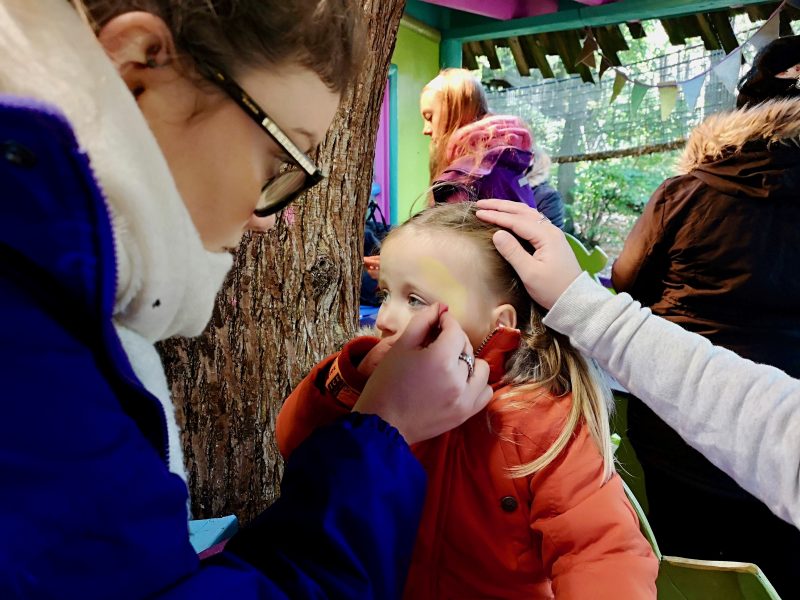 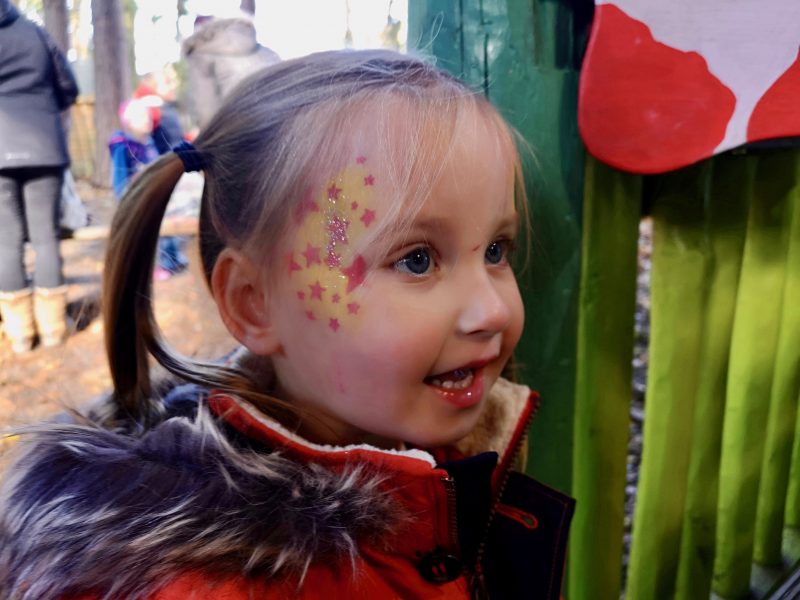 When it came to bedtime Erin didn’t want to take her stars off and would happily have had them there for days if we’d let her.

Next up we headed over to the Den Building area as I knew that Erin would love this. I think we all took it a bit too seriously as our den was a lot more elaborate than anyone else’s. 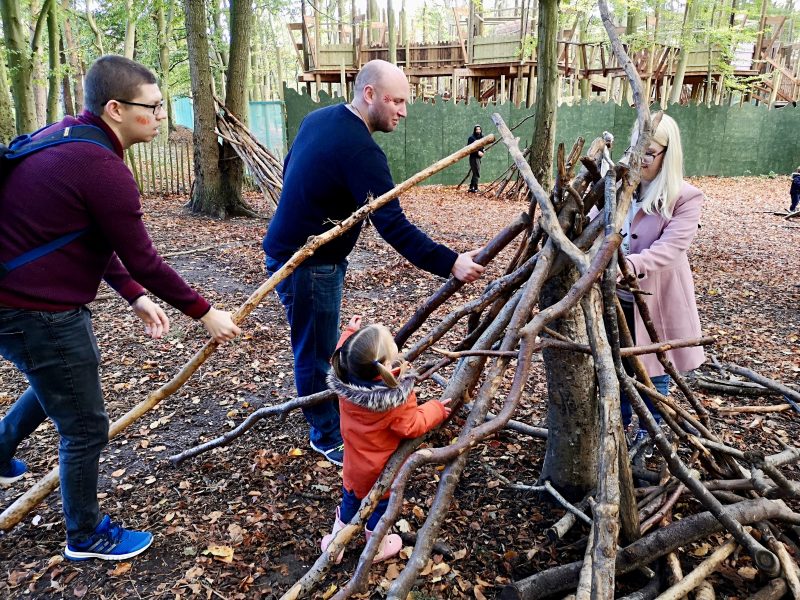 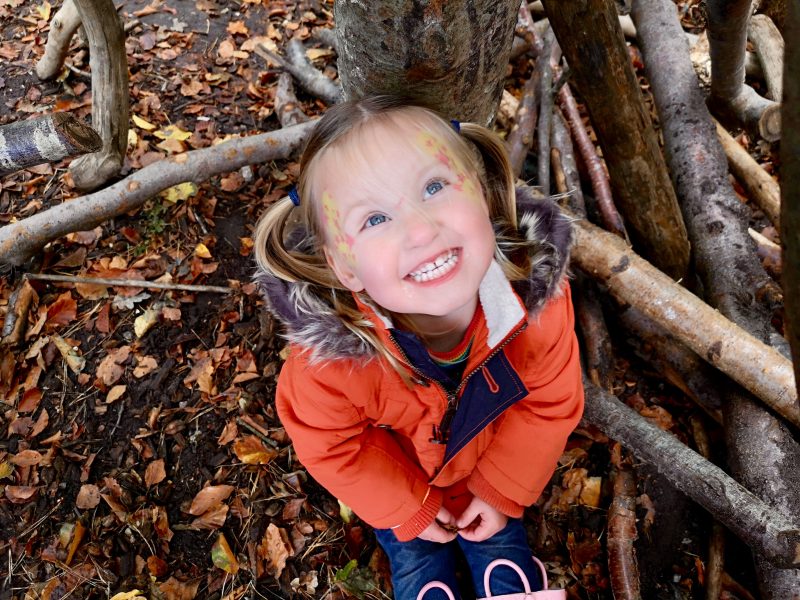 There are 3 stories a day told at the stage at BeWILDerwood and we managed to catch one of them. Erin was straight up on the stage and having a rummage around in the dressing up box. For the story Erin dressed as a BeWILDerbat. Erin listened to the story, jumped around in excitement and flapped her wings around like a lunatic. If the shop had sold these costumes I think I would have bought Erin one so maybe they’re missing a trick there. 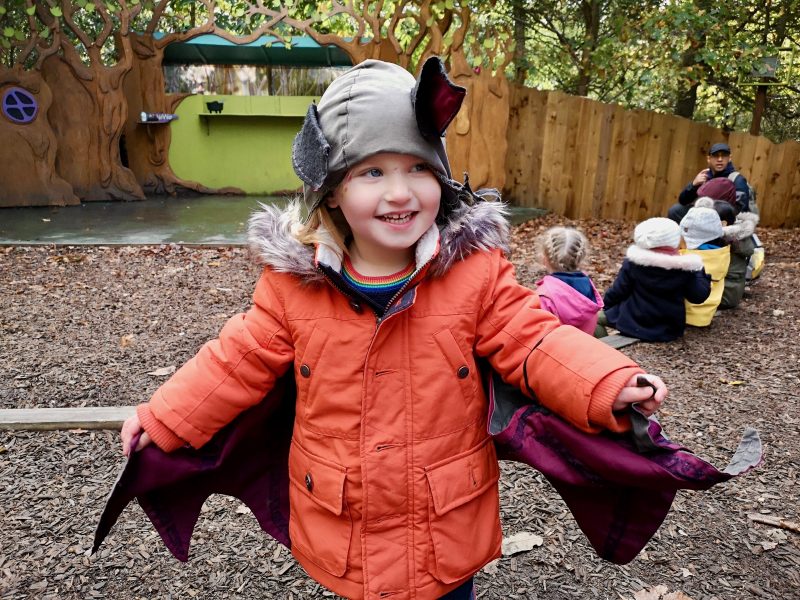 We spent hours exploring BeWILDerwood letting Erin jump, run and climb to her heart’s content. We got lost in a maze, went on slide and a swing for 3. Erin even went on a mini zip line and she LOVED every second. I think she’d have one in the back garden if we could manage it. 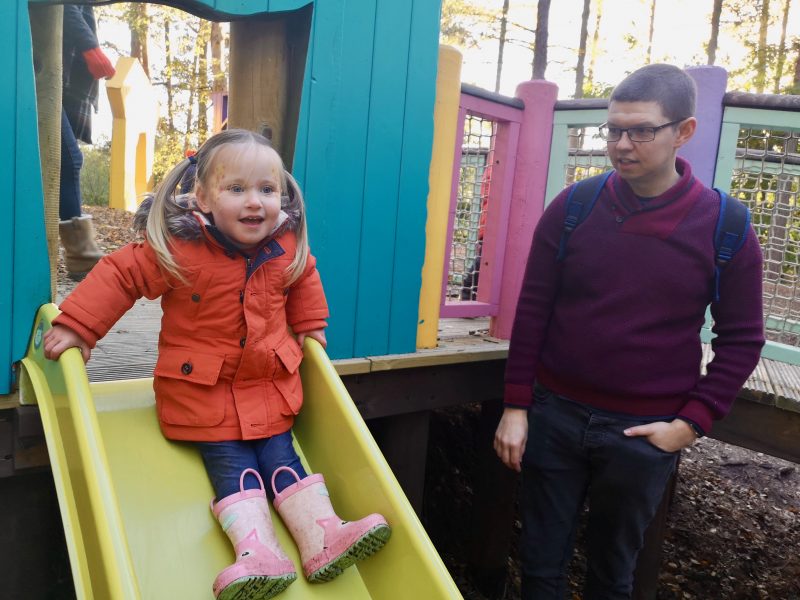 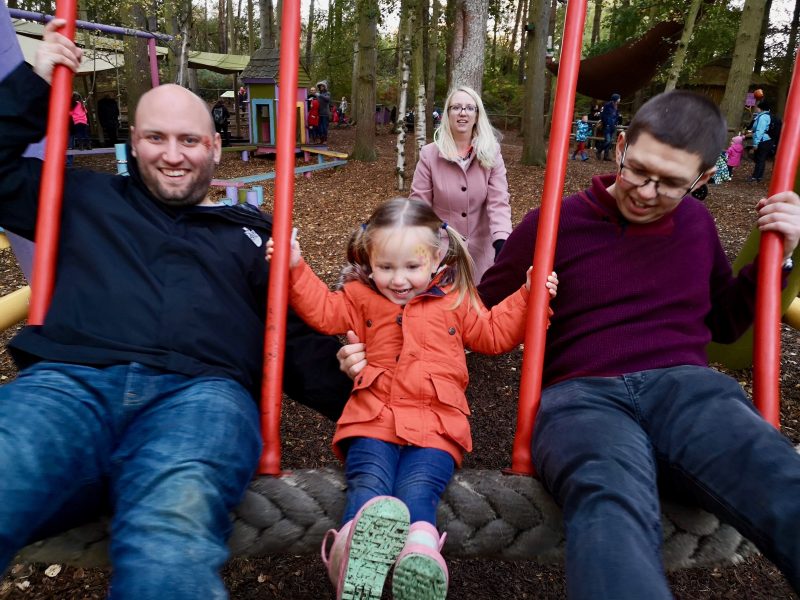 Before our visit I was worried about just how much there was for Erin to do at BeWILDerwood. She’s nearly 3 and honestly, I needn’t have worried because apart from 1 or 2 things, Erin could do everything… even if we thought she wouldn’t be able to. There were a couple of slides that were far too big for Erin but that didn’t stop her asking to go on them!

BeWILDerwood has 3 different food areas with plenty of seating. There is both hot and cold food available but you’re welcome to take your own food in as well. We took a bit of a picnic but I had a look at the food available and the prices were really reasonable and it looked delicious. My brother in law did get an ice cream though which Erin talked him into sharing with her (he never stood a chance). The whole of BeWILDerwood was extremely clean and there are plenty of bins everywhere which was great to see. 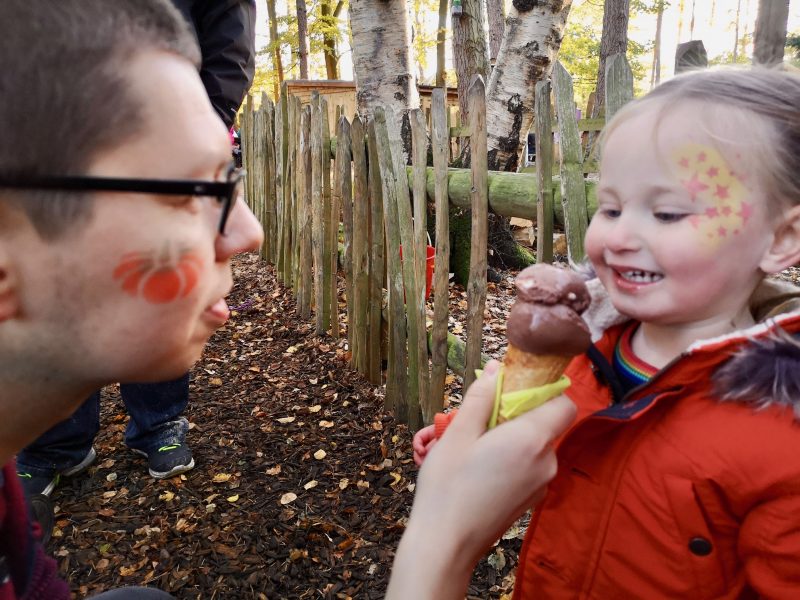 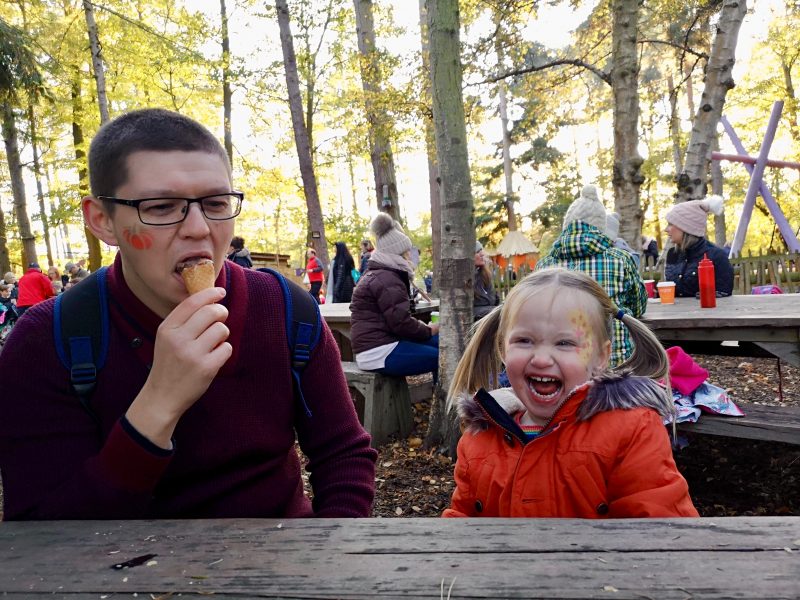 As Erin has always been a napper, this is the first time we attempted to take her out for a (nearly) full day. We desperately tried to stay for the lantern parade but Erin crashed at about 4:15. At this time, it was getting dark and very cold quickly and we didn’t want to keep Erin out longer when she was asleep. 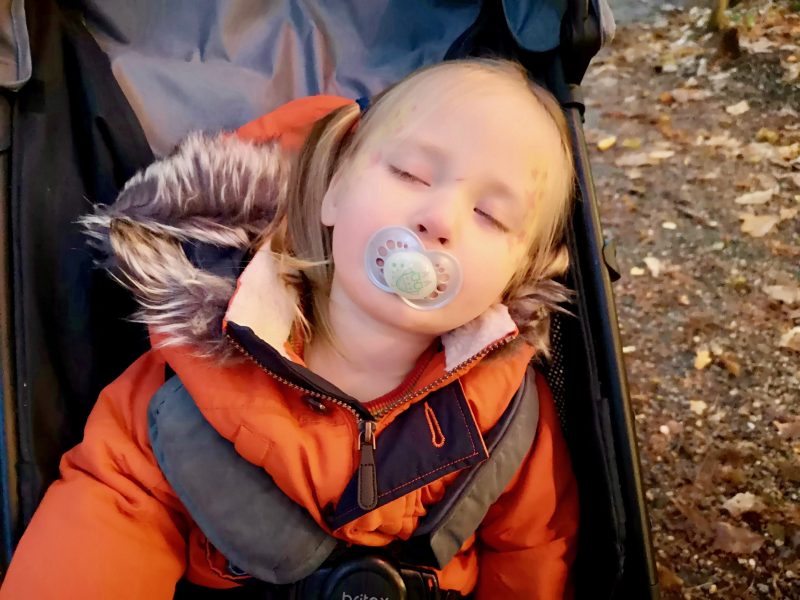 We sadly missed the lantern parade but we were able to see some of the lights and other decorations on our walk out back to the car and they were fantastic. The whole of BeWILDerwood was lit up and beautiful, as well as a bit creepy at the same time. You can see just how much work goes into decorating for events and and it’s nice that somewhere goes to so much trouble. 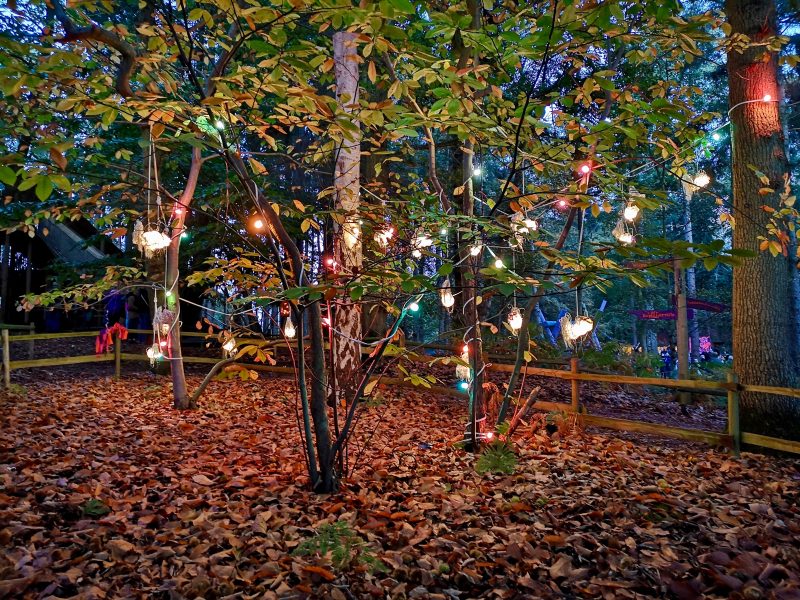 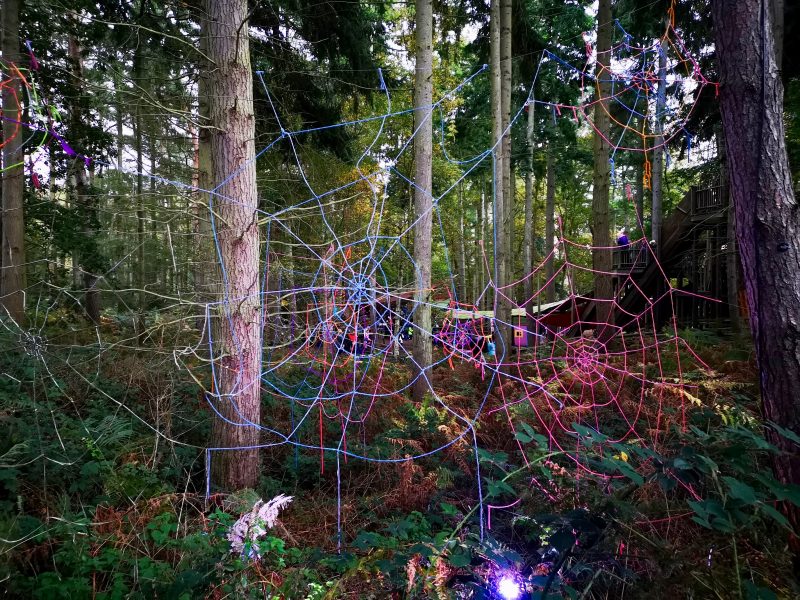 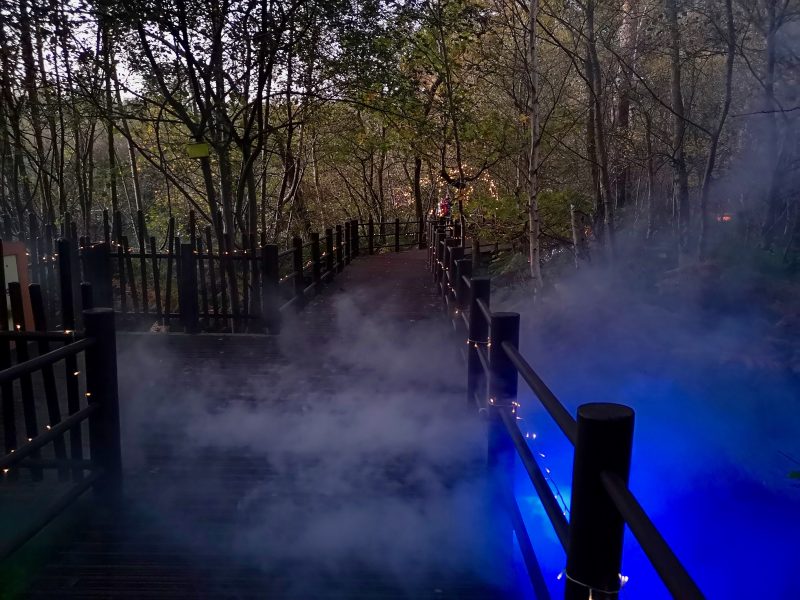 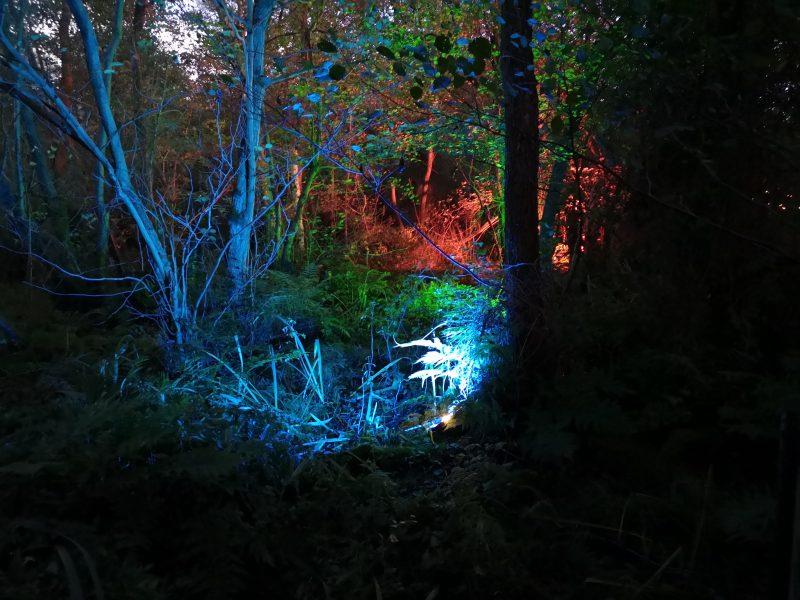 Thank you to BeWILDerwood for such a fantastic family day out. BeWILDerwood closes during the winter months and is now closed until February. I know we’re going to be back next year and I can’t wait to see what their other events are like. 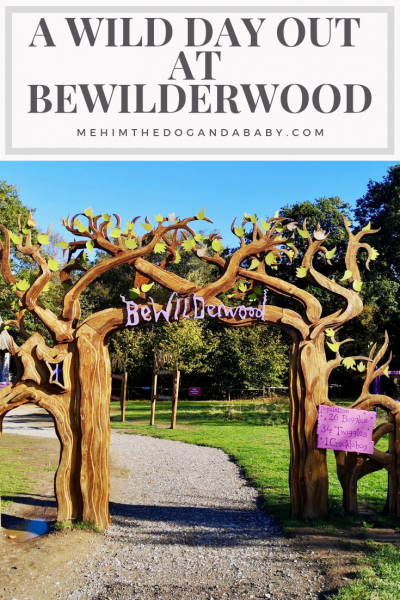 Disclaimer: We received complimentary tickets to BeWILDerwood for the purpose of this post. All opinions are our own.

1 thought on “A Wild Day Out At BeWILDerwood”