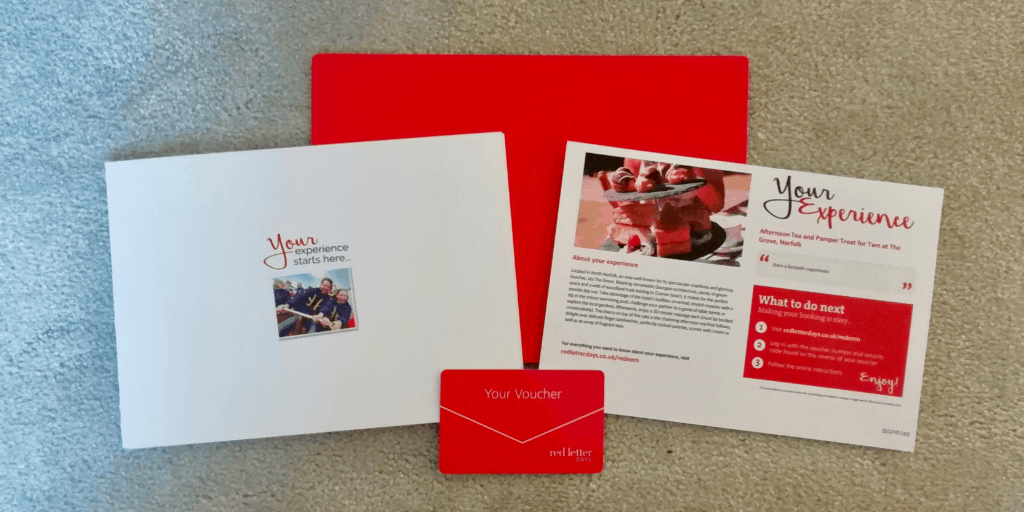 Being someone who is self-employed and works from home means having very little ‘me’ time. Don’t get me wrong, I have days where Erin is at nursery and John is at work so I have the house to myself but then I have work and cleaning to do. I have my nails done for special occasions only like going on holiday and I think I’ve had my hair done 2-3 times since Erin was born nearly 3 years ago. So, when Red Letter Days got in touch to see if I would like to test out one of their experiences, I jumped at the chance.

I decided to go for the Afternoon Tea and Pamper Treat for Two at The Grove which is in Cromer, Norfolk. The reason I chose this was because this was where Erin used to have her swimming lessons and I always thought it was such a beautiful place. The experience costs £99 and includes a 30 minute massage for 2 at The Massage Hut along with afternoon tea at The Grove. I chose to take my sister along with me for a bit of a girly afternoon.

Booking was really quite simple. I called The Grove who asked me to call The Massage Hut instead to book in our massages first. I booked around 6 weeks in advance as this was the first opportunity I had to go and I was able to have the date and times I wanted with no issues at all. We were advised at this point that our massages had to be booked consecutively as The Massage Hut can only do 1 at a time. We were also advised that we needed a 10 minute consultation before the massage as well. Once we had agreed a time the lady booking us in said she would arrange our afternoon tea for straight after our massages so I didn’t need to do that myself which was nice.

After arranging the booking, I was emailed a detailed itinerary which I found really helpful and was also asked if we had any health or dietary requirements.

When we arrived at The Grove we were shown to one of the sitting areas to wait for Pat who would be doing our massages. My consultation and massage was booked for 12:50 but we’d arrived a bit early. Pat came and said she wasn’t quite ready but if I wanted to, as soon as she was I could go through so we started a bit earlier than expected. The Massage Hut is set within the grounds of The Grove and and really private and secluded. 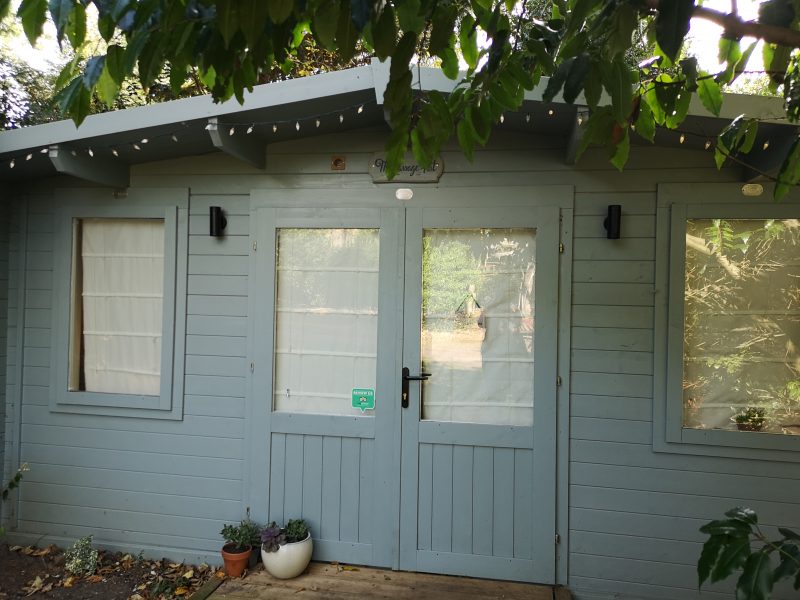 The consultation was quite thorough but not intrusive and covered things like health issues. I was also asked what kind of massage I wanted at this point so I opted for neck, shoulders and back as I figured this is where I’d have the most tension. The room had a large curtain which closed off the treatment area so I had somewhere private to get undressed and to get comfortable on the table. The room was really lovely and relaxing with dim lights and soothing music. 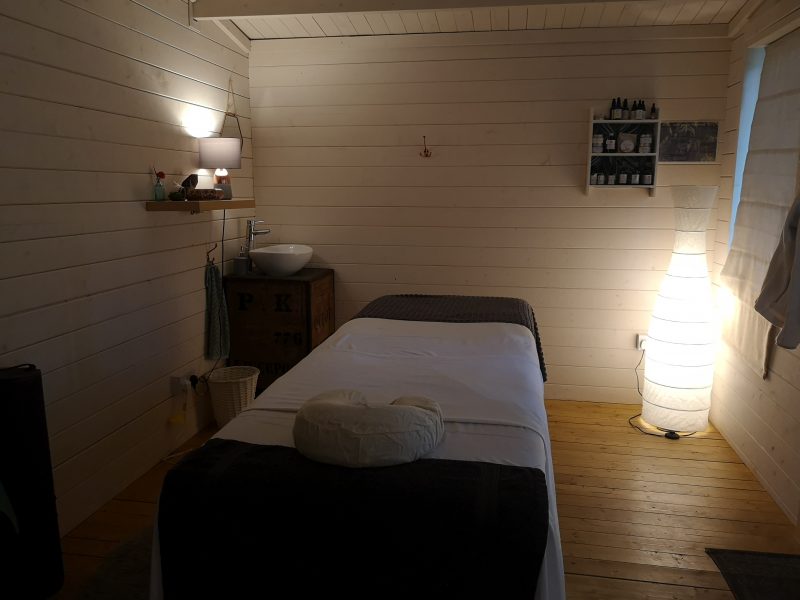 The massage was absolute bliss and Pat was fantastic. Before the massage she asked exactly what I wanted and offered some advice for what I could have done and I appreciated this. The 30 minute massage felt like a lot longer in the best possible way and I felt completely relaxed afterwards. After getting dressed again I was offered water and to sit down for a little while to get myself together again and we had a little chat which was really lovely. I think something like this made the experience much more personal than it could have been. 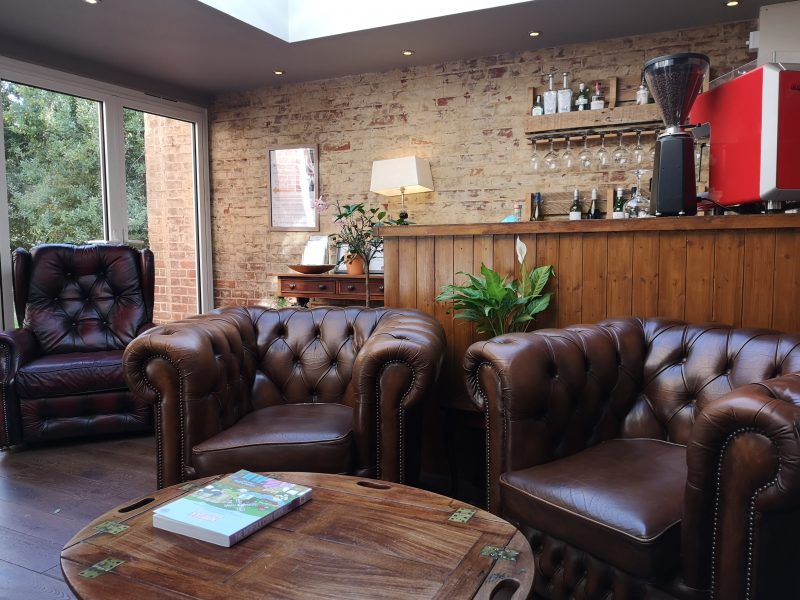 While my sister was having her massage I went back to the sitting room in The Grove and had a drink and just relaxed. The Grove has beautiful gardens to walk around if you want to and there is also a swimming pool that you can use for a small fee.

My sister came out of her massage at around 2:20 and we were ready for afternoon tea at 2:30. There are various areas to eat at The Grove but we chose to sit in the restaurant area as we wanted to sit up at a table. Before our food was served we were offered tea or coffee and there are quite a few options available for tea. I don’t drink hot drinks and as I’d already got a drink while I was waiting I was allowed this as my drink instead without having to pay extra.

Afternoon looked delicious when it came out! At the time of booking I had asked for 1 person’s sandwiches to be suitable for a pescetarian and for mine to be cheese and ham only because I’m really fussy. The sandwiches came out separately from one another which I really appreciated but honestly, they were a bit of a let down. My sister said her sandwiches, which you can see below, were really nice but a bit strange than some were on 2 different kinds of bread. My sandwiches were a real let down and I didn’t think you could get cheese and ham wrong. To start with, the sandwiches were mixed cheese and ham instead of separates. Also, some sandwiches had the smallest amount of cheese and in some, the ham was half fat so I had to pull a lot of it apart. 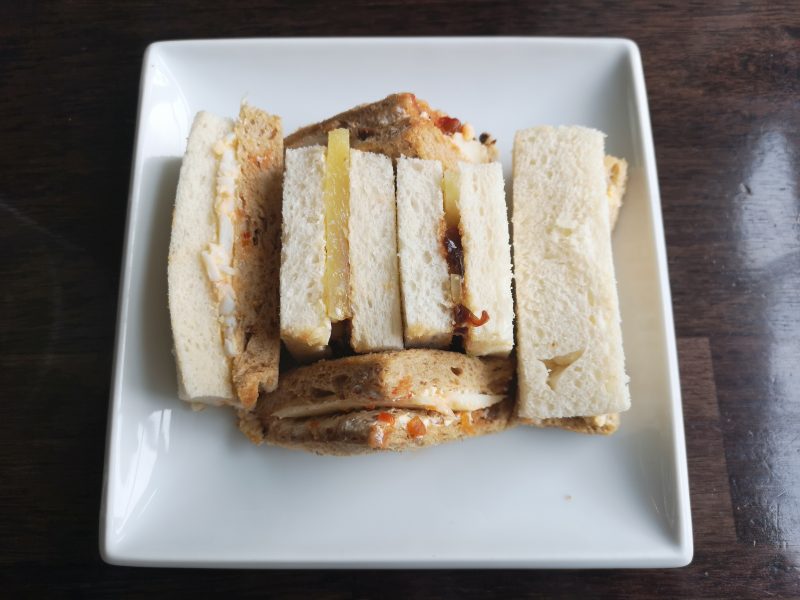 Luckily, the rest of the afternoon tea made up for the disappointing sandwiches. We had profiteroles, meringues, sponge cake with macaroon topping, warm fruit scones, chocolate brownies and fruit cake. I’m not usually such a fan of anything with cream in it but these cakes were just wonderful. The profiteroles and meringues were so fluffy and light and I think I would go back for these alone. 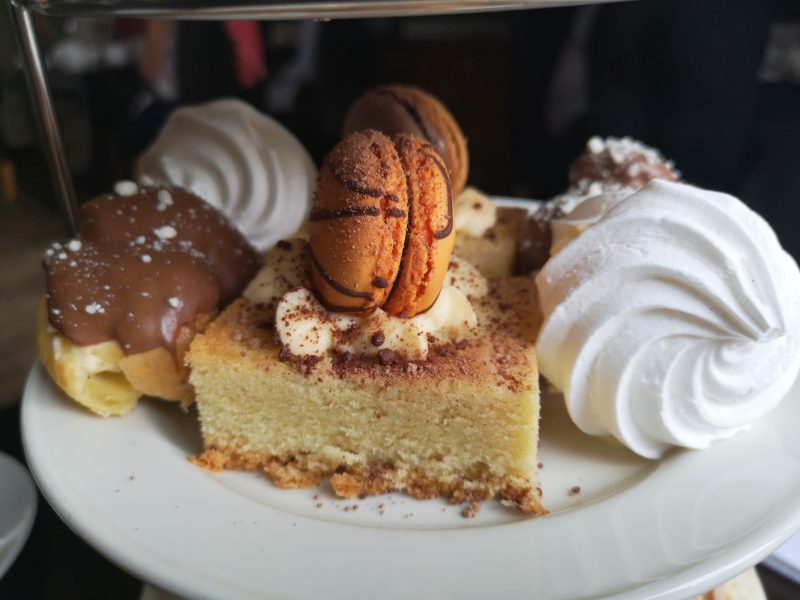 The cakes were absolutely delicious but we couldn’t manage everything because we were so full! The Grove were happy to let us box the leftovers up to take home though although we had to go and find someone to ask as the service wasn’t great. Unfortunately, during our afternoon tea someone only came over once to see if everything was okay and we were never asked if we would like anything else or any other drinks. I think The Grove miss out here because I think both of us would have liked another drink and we never had the chance. 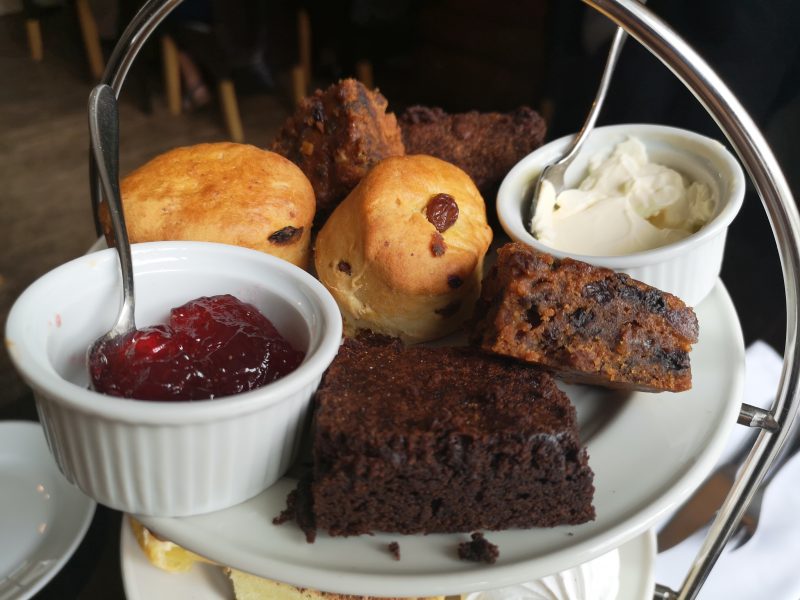 For £99 I think this is an absolutely wonderful package and at a great price. Even though I had a few small niggles, this wouldn’t stop me from going back and doing it all again. Red Letter Days offer quite a few experiences at The Grove, along with others all around the UK so I would definitely try another with them again. 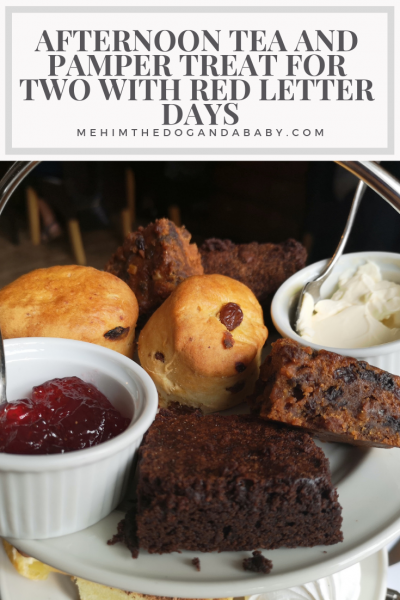 Disclaimer: We received this experience free of charge for the purpose of this post. All opinions are our own.