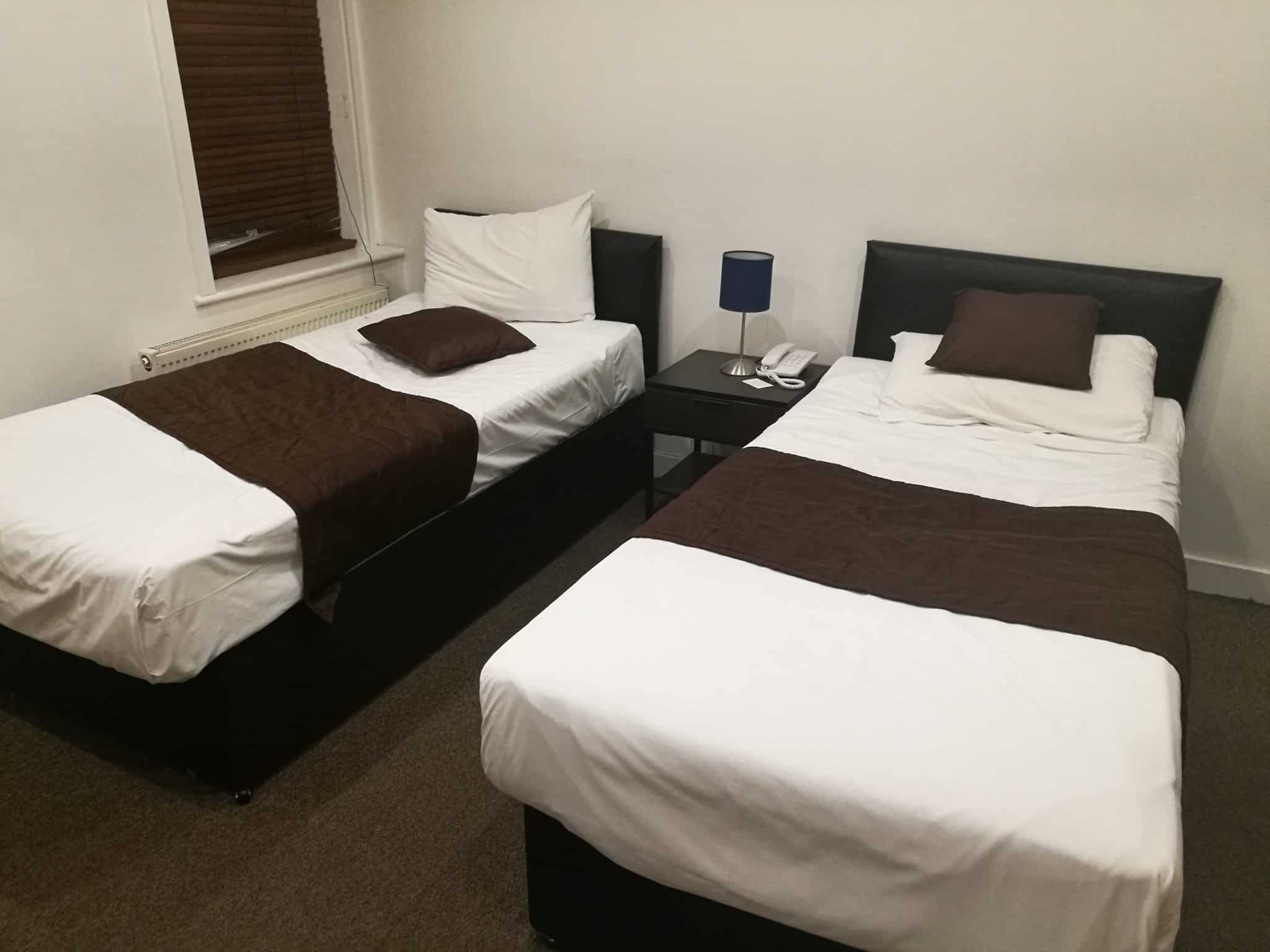 A couple of weeks ago I spent a night in London when I went to see Penn & Teller at the Eventim Apollo. Normally I would stay in a chain hotel if I had Erin and John with but seeing as I was on my own, I went for a bit of a cheaper hotel. This time I stayed at the Avni Kensington Hotel, located between Gloucester Road and Earl’s Court tube stations.

The hotel is only a 5 minute walk away from Gloucester Road tube station and it’s in a really nice area. I have stayed in some London hotels and not felt very safe getting back at night. This wasn’t the case at all with the Avni Kensington Hotel.

The entrance to the hotel was unfortunately a little bit shabby. The A was missing from the name outside which immediately made me question what the inside would be like. Inside the entrance is a small seating area where you can buy drinks and cakes as well as the reception desk. I got checked in quickly, got given a tiny piece of paper with the WiFi password printed on and my room key. I was also told that breakfast was included, given a token and told where and when it was.

My room was on the basement level. As I approached my door, it was already open which was a bit unsettling really. However, it locked absolutely fine once I was in there. I checked it was okay quite a few times. Unfortunately, my impression of the room was just about as good as it was of the entrance.

I had booked a single room and got a twin, which wasn’t a problem at all. However, the beds weren’t very comfortable. I had to use the pillows from both beds to be able to sleep okay. The beds also did not come with duvets. When I visited we were in the middle of a heat wave but this is just cheap in my eyes. The sheet on the top of the bed was the same thickness as the sheet on the bottom. The room did have extra blankets but they were scratchy and not very nice. 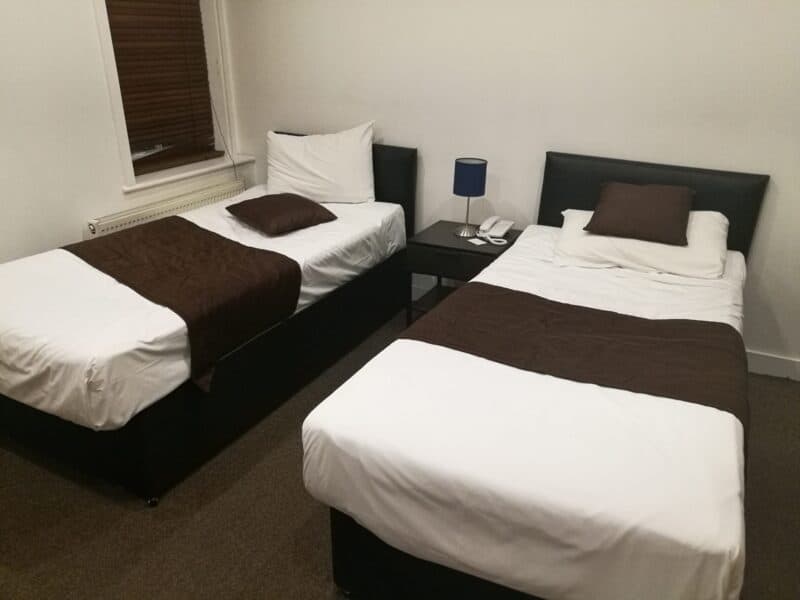 As you can see from the picture above, the room had one small window with a broken blind. That blind let in light in the morning, meaning I couldn’t stay asleep.

The room had no air con and no real heating. Instead, there was a plug in fan and a plug in heater. The room also came with a wardrobe where you wouldn’t be able to hang a dress, a safe and a little table for drinks. There was a also a hairdryer and a long mirror. There was also a small TV on the wall opposite the beds.

Yet again, certain aspects of the room were just too shabby. The hairdryer had a hole underneath it where it hadn’t been put up right the first time. The TV on the wall was such a hazard that I didn’t dare turn it on. There was a hole in the wall and wires everywhere! 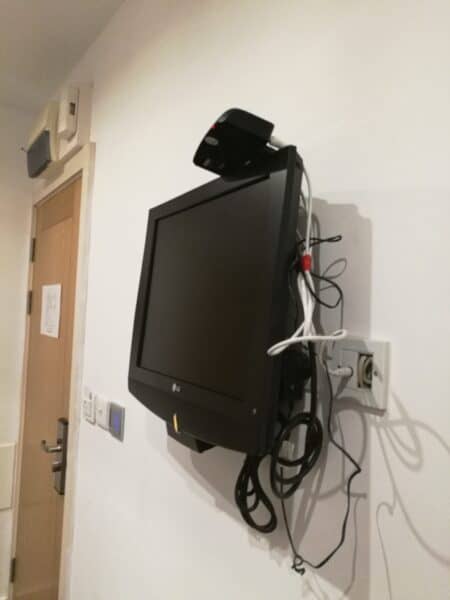 If I didn’t think it could get worse, I was wrong. Next there was the bathroom. Actually, the bathroom was decorated much nicer than the room.

Yet again, things made my stay worse. The toilet seat was loose and moved about. The sink didn’t have a plug. The shower, well, I have never used a shower cubicle so badly designed. 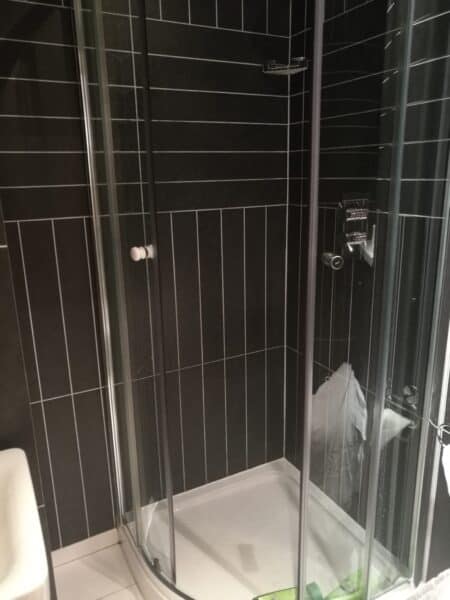 You can’t see quite good enough from the picture but the doors only opened a little bit. I am not a small woman and I could barely fit through these. Also, I turned the shower on before I got in to make sure the temperature was okay. It wasn’t. It was freezing. When I did this, the bathroom got soaked. When I was in the shower there wasn’t enough room for me to wash my hair without being directly under the water stream or turning it off.

Even though a continental breakfast was included, I only ate a banana, something I have never done with a free breakfast. The breakfast room was tiny and at 7:30 exactly, was packed. I couldn’t get to any of the food, let alone make some toast. One man was complaining to a member of staff when I walked in because the milk was off. They said it wasn’t but then the man showed his curdled drink. This is the reason why I only ate a piece of fruit.

The Avni Kensington Hotel describes a stay as ‘an upscale Three Star experience’. This couldn’t be further from the truth. At £94 for a single room for one night, I was seriously ripped off. Next time, I’ll pay more to stay somewhere I know is okay!