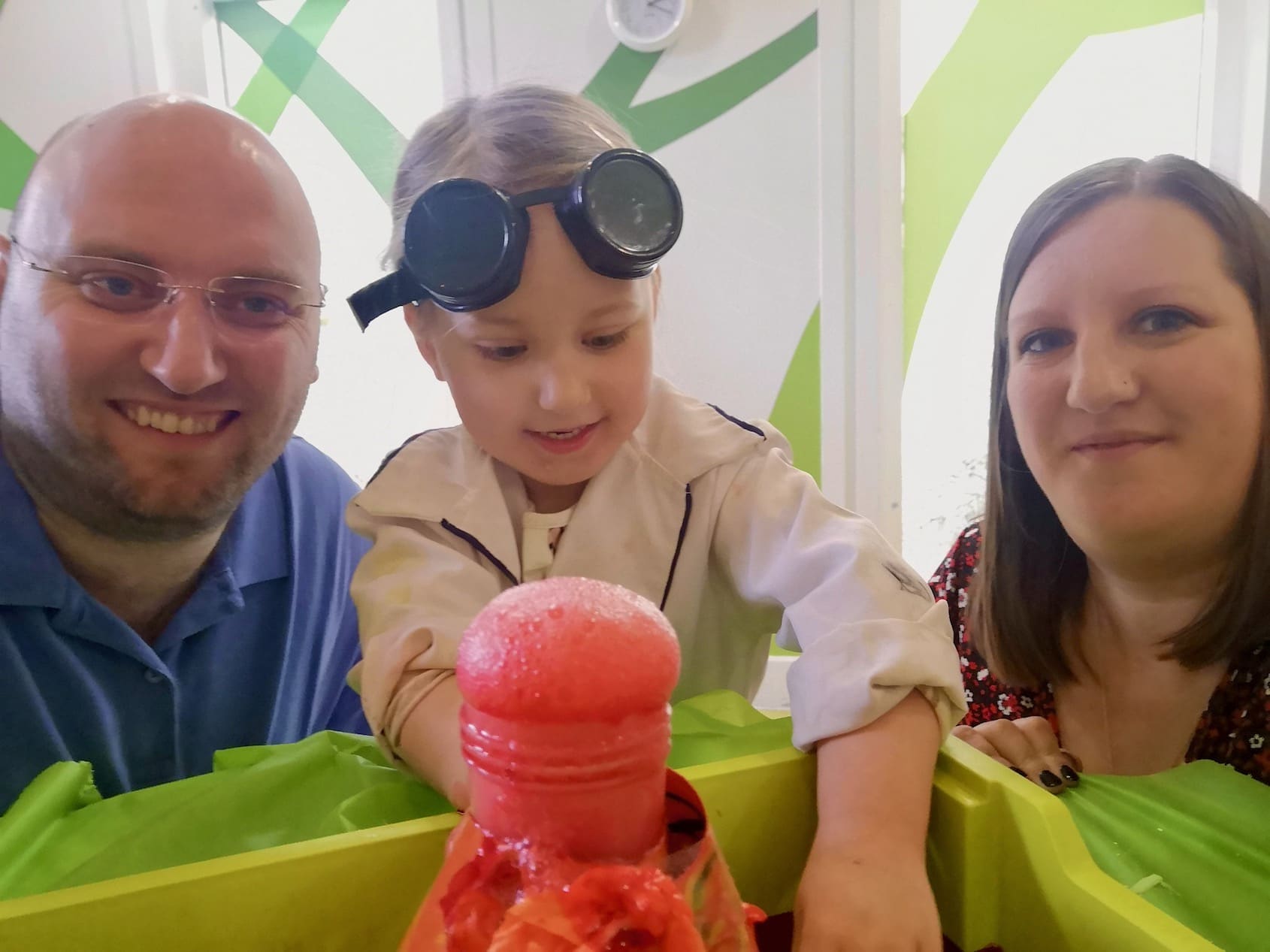 Over the years we have been to Center Parcs a couple of times but Erin was always really too young for a lot of the activities. This year though during our visit in March she was 4 so able to do a lot more. While we were there my Mum booked Erin in for the Crazy Science session on the Thursday morning. The session lasts for 1 hour and you should be there 10 minutes before the start time. Crazy Science is in the activity den so it’s really easy to find.

As we arrived at the activity den ready for the session there was a couple of others waiting too. We visited during term time so the session wasn’t very busy at all but I imagine this is different during the school holidays. The website says that only 1 adult can supervise due to the space needed however, as there was only a couple of people booked in they let both me and John go (we checked the day before). Elleigh was the one running the session and we had met her the day before during the cupcake decorating class.

Before the session started all of the children washed their hands and got suited up in lab coats. Unfortunately, the velcro was really bad on all of the lab coats and they didn’t do up very well. I would suggest making sure your child wears either old clothes or ones that you’re not bothered about being ruined.

The first experiment was to make slime. Erin was given a bowl of cornflour, a flask of water and some food colouring and everything was explained step by step. Being on the younger end of the age range for this class (3-7) Erin did find this a little bit difficult as it was all a bit hard to stir in the bowl. However, John was on hand to help! 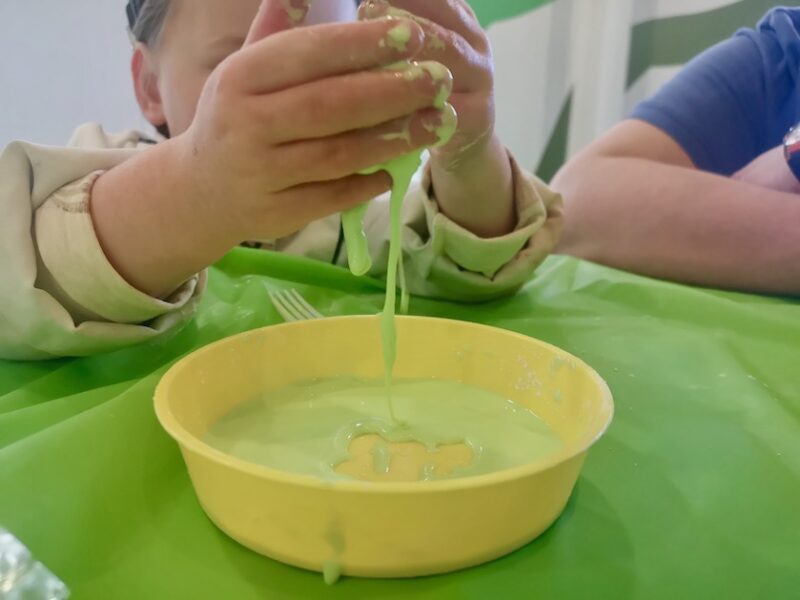 Erin had been a bit obsessed with slime for weeks before doing this so she loved this experiment. Also, it was nice to be shown an easy way of making slime that we could then do at home on a later date.

After getting cleaned up it was time for the next experiment. This time, it was time to make a volcano. Elleigh set the children up with paper stencils and paper to start making the outer bit of the volcano along with tissue paper to decorate it with.

Making the volcano took quite a bit of time but Erin followed the instructions really well. She loved having one that was already make to look at but Erin definitely put her own stamp on the design. She has always been really crafty so this was right up her street. 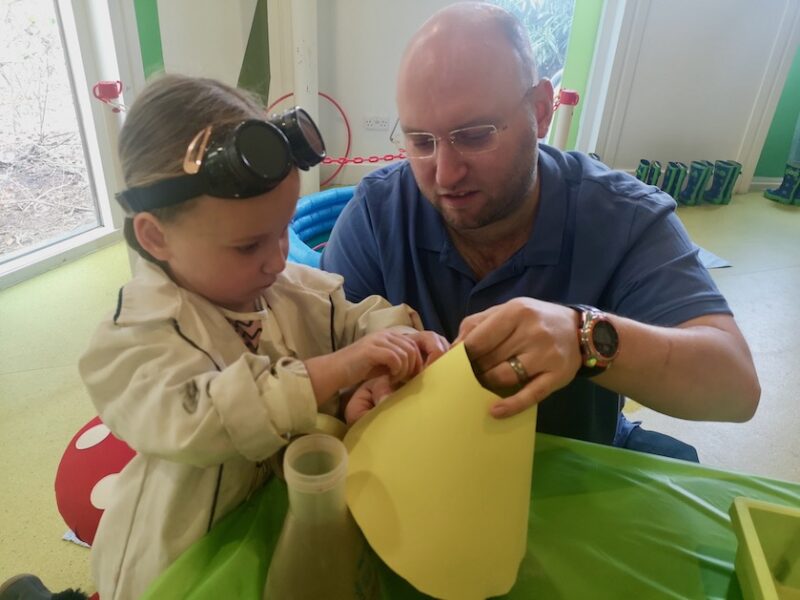 After everyone had made the outside to their volcano it was time to do the real thing. At this point, we were able to choose whether to use the outer bit we’d just made or not to as it was about to get ruined. Erin wanted her volcano to look real so we used it! I can’t remember the ingredients exactly but it was something like a mix of baking soda, vinegar, food colouring and washing up liquid. 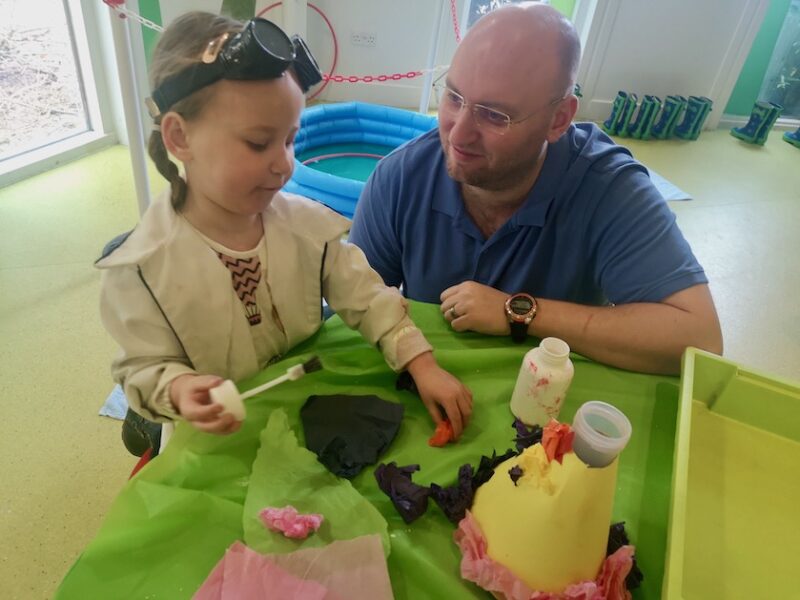 Erin ended up absolutely covered in the red volcano, which is why I said children should really wear old clothes. Somehow from washing her hands the red ran down, underneath the arms of the lab coat and on to her top underneath. We didn’t mind though and most of it did come out in the wash. 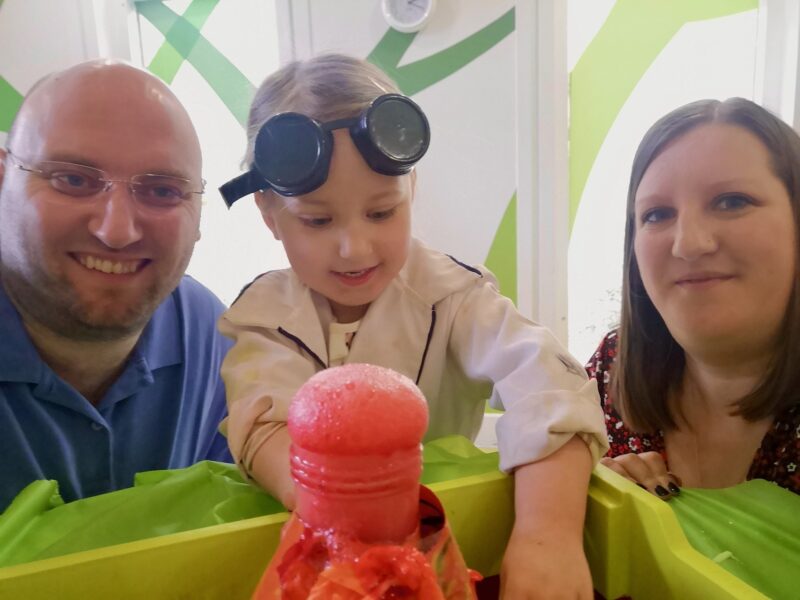 The third experiment was quite an easy one. Everyone had a bag filled with water that was tied up, along with a handful of sharp wooden sticks. The aim was to get as many sticks through the bag as possible without letting any water leak out. We managed to do quite a few but Erin was determined to squeeze the bag so we didn’t do as well as some of the others. 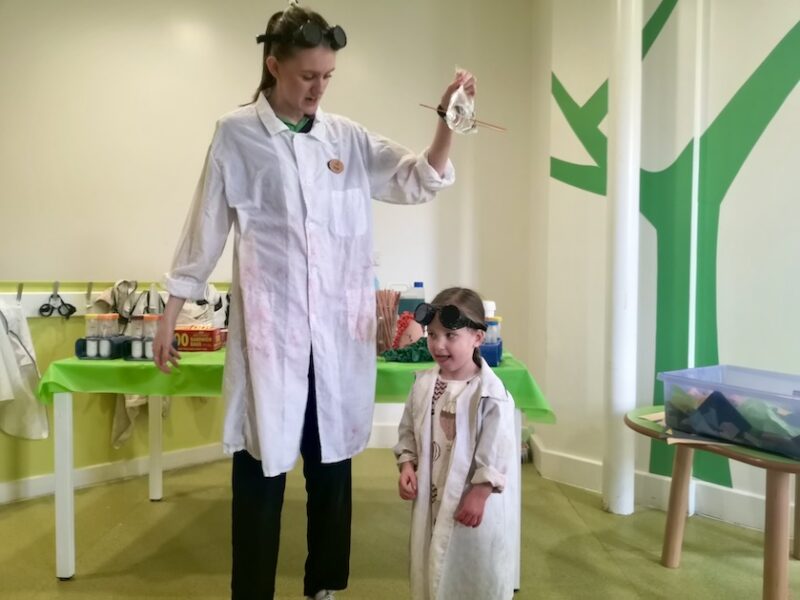 The last thing we did was make giant bubbles that the children could stand in and I think this was one of Erin’s favourites, next to the volcano. I couldn’t get any good pictures of this though as it didn’t last very long.

Overall, we thought the Crazy Science class was well worth the £16 we paid. The length of the class was great and as it wasn’t so busy each child got quite a lot of attention. 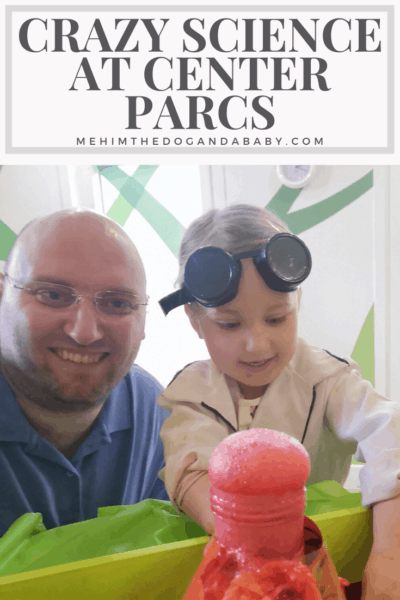