For the past week or so I have really been trying to encourage Erin to copy what I say to her and I’ve been saying Mama, Dada and Pup A LOT! She has been super chatty lately so I thought it might be time for her to learn how to say a word.

Yesterday was Bank Holiday Monday and that meant John was home for the day. We had a lovely morning going swimming and then we came home to play. As we were all playing with Erin on the couch, I heard it. Dada. John didn’t believe it. Then she said it again! 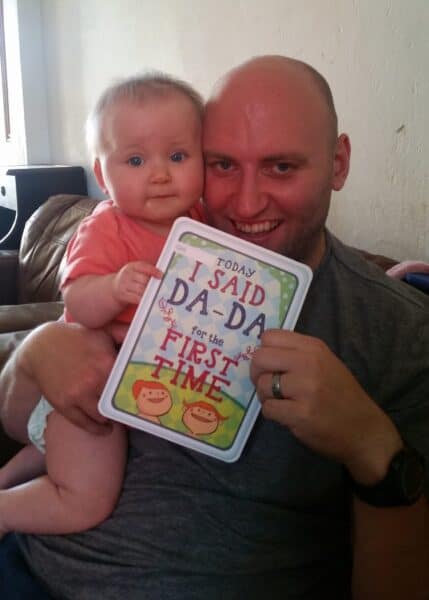 After she said it a couple of times I knew that she did actually say it on Sunday. Erin had just woken up a mad chatter session then so I really couldn’t be sure. I wasn’t going to count it if I wasn’t sure and John didn’t actually hear it at all. It takes a lot to convince him that Erin is doing things unless it is very clear!

Erin seems to have a thing about waiting for her dad to be around to do something new. I had been trying to get her to roll over for ages and she waited for a day where John was home all day to do it and then wouldn’t stop. The same with her first word! I’m really happy that Erin seems to wait though. John misses out on so much because he works full time. I am also happy (secretly annoyed) that she said Dada first as well!

What was your child’s first word?