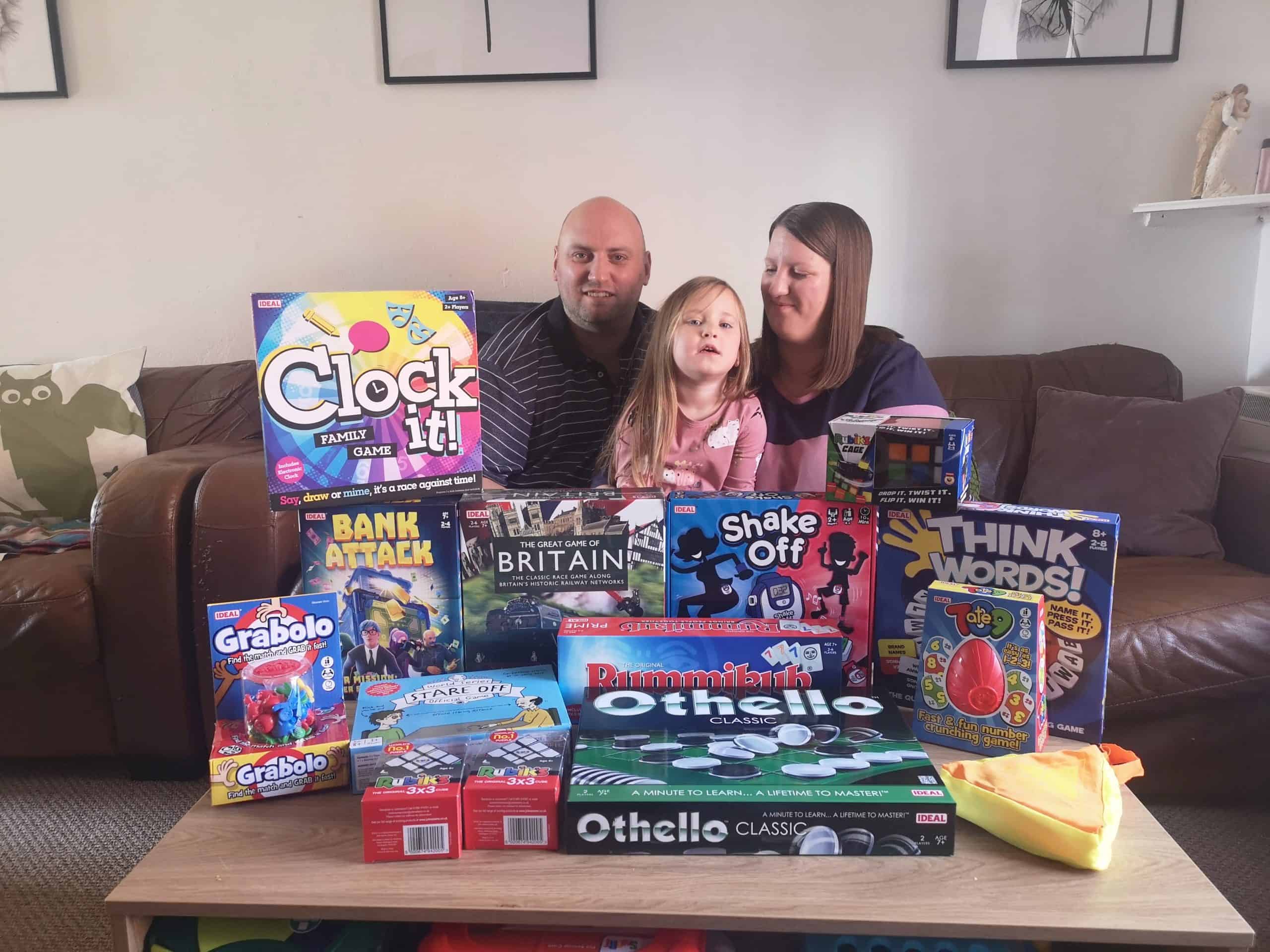 The lovely people at John Adams sent us the most fantastic package of games to keep the whole family busy, entertained and having fun during this really testing time. Seeing as we can’t go out on an evening we thought this bundle would make for a really good games night.

Games don’t have to be really complicated to be enjoyable and some of the best games are really very simple. Othello* is one of those games. I’ll be honest though, although the idea seems really simple it did take a little while for me to get my head around it. John and I sat down for an initial game to see if we could pick up the rules.

After a few goes we realised the game was a lot easier than we thought and we really only had to remember a few simple things. Othello is a game for only 2 people so it was quite nice to get some time to play this with John, until Erin decided she wanted to join in anyway. Another good thing is that games don’t have to last too long so it’s not something you need to put hours aside for. 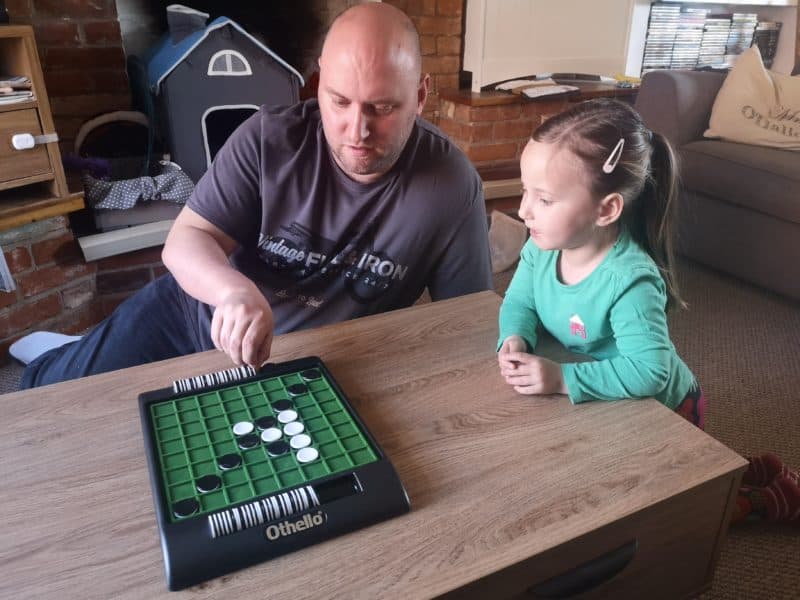 I can see Othello being a game we play quite often and although it’s not one really aimed at children Erin’s age, she enjoyed being able to help flip the counters over.

After trying to get our head around Othello something a bit more simple was needed. I remember playing Rummikub Prime* years ago so the rules were sort of familiar and I only needed a bit of a refresher. This is a great game to play with the family, and is aimed at children from 7!

Each player starts with a certain number of tiles and the aim of the game is to get rid of them all by creating runs (e.g. 1,2,3,4) or groups of the same number (e.g. blue 5, black 5 and red 5). Players take it in turns to put down their tiles or add/ change existing groups that have been put down.

As each game is completely different to the next, thanks to tiles being different and how people play, it really helps to keep the brain engaged and of course, it’s fun trying to win each time!

Not only did we get Rummikub for us adults but we also got Junior Rummikub* so Erin could learn to play too. I’ll admit, I was slightly worried about how hard this would be for her as the age range starts from 4. Erin does know numbers but we’ve never really played any games like this before where she has to really think about a sequence.

We’ve started off playing the simplified version of Junior Rummikub with Erin until she really gets the hang of it and learns runs of numbers a bit better. She loved having her own little rack and as soon as she saw the stars she was really excited about getting them. Although this isn’t really necessary for the game, it’s nice to have something that children will get excited about, making them want to play more.

Erin doesn’t quite have the hang of Junior Rummikub yet but she has fun playing it (even if she doesn’t follow rules) and it helps us to teach her about numbers in a fun way.

Another fun numbers game that’s suitable for the whole family is Triominos Sunshine* This is Dominos with a twist as each of the pieces are triangular, bright orange and each piece has three numbers instead of two. The great thing about Triominos is that you can slightly alter the game depending on who is playing for instance, John and I would play differently to how we would play with Erin.

When you think of a Rubix cube I would say you generally think of it as a solo game. However, the Rubix Cage* makes it possible to play with other people and it adds a whole other kind of challenge.

With this one you are given a Rubix cage, which has blocks in 6 different colours. We played with 2 players, although it can be played with up to 4, and we chose 3 different colour sets each. You take it in turns to make a move, either dropping a cube, twisting the cage or flipping the cage. You can only do 1 thing on each turn. 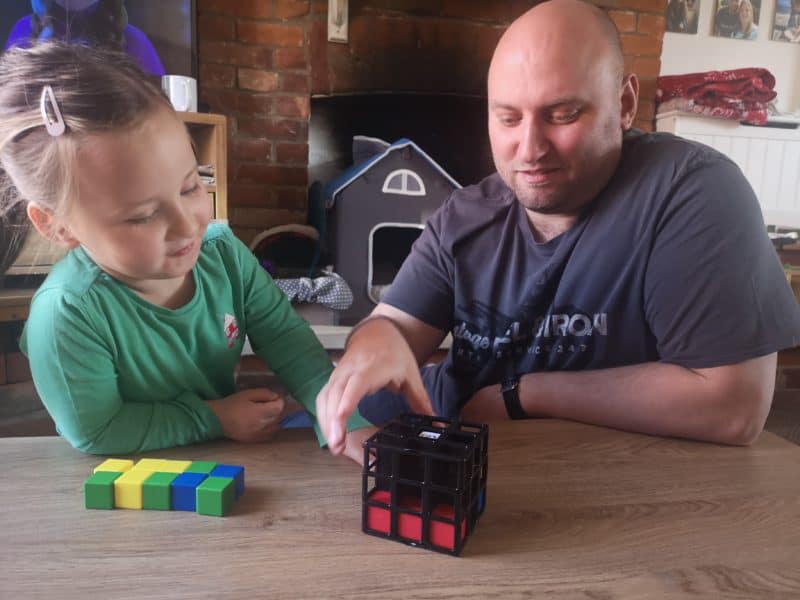 I really enjoyed playing Rubix Cage and it was really quite hard. After the other player/s take their turns you really have to think about what the best move is to make next. Making the wrong move could end up making things really easy for your opponent or it could set you up for your next turn! 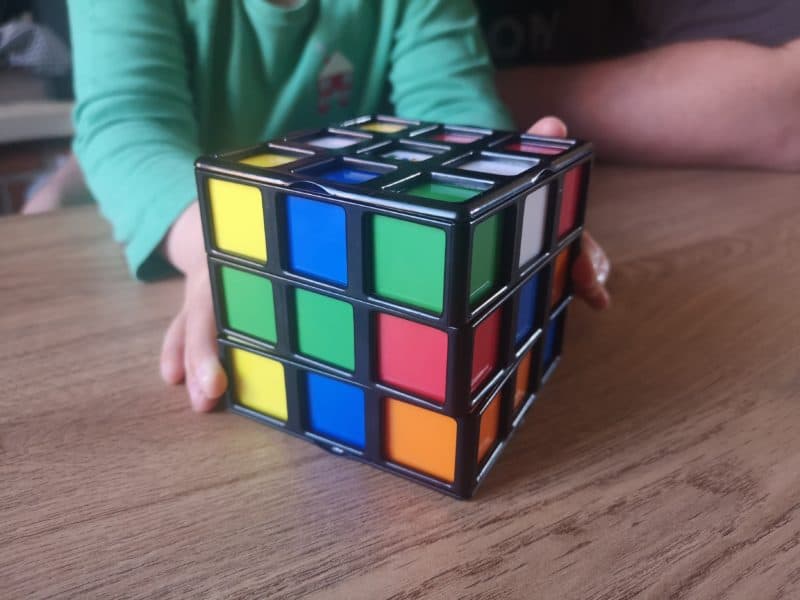 Due to there being lots of different ways to play, Rubix Cage will be different every time and things will change depending on who you play with too.

Having regular games nights has really helped to take our minds off of what is going on in the world right now. John Adams have such a fantastic range to choose from and there really is something for the whole family, whether they are 4 or 40. 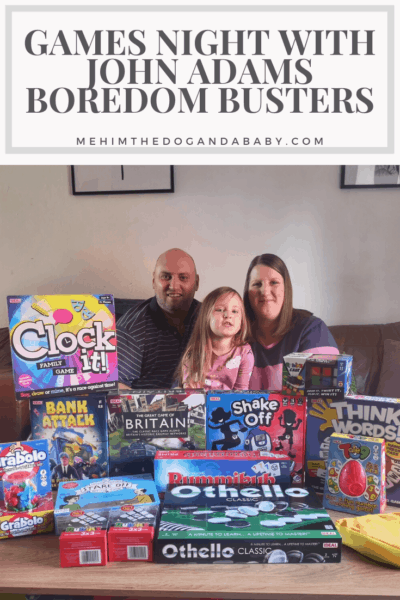