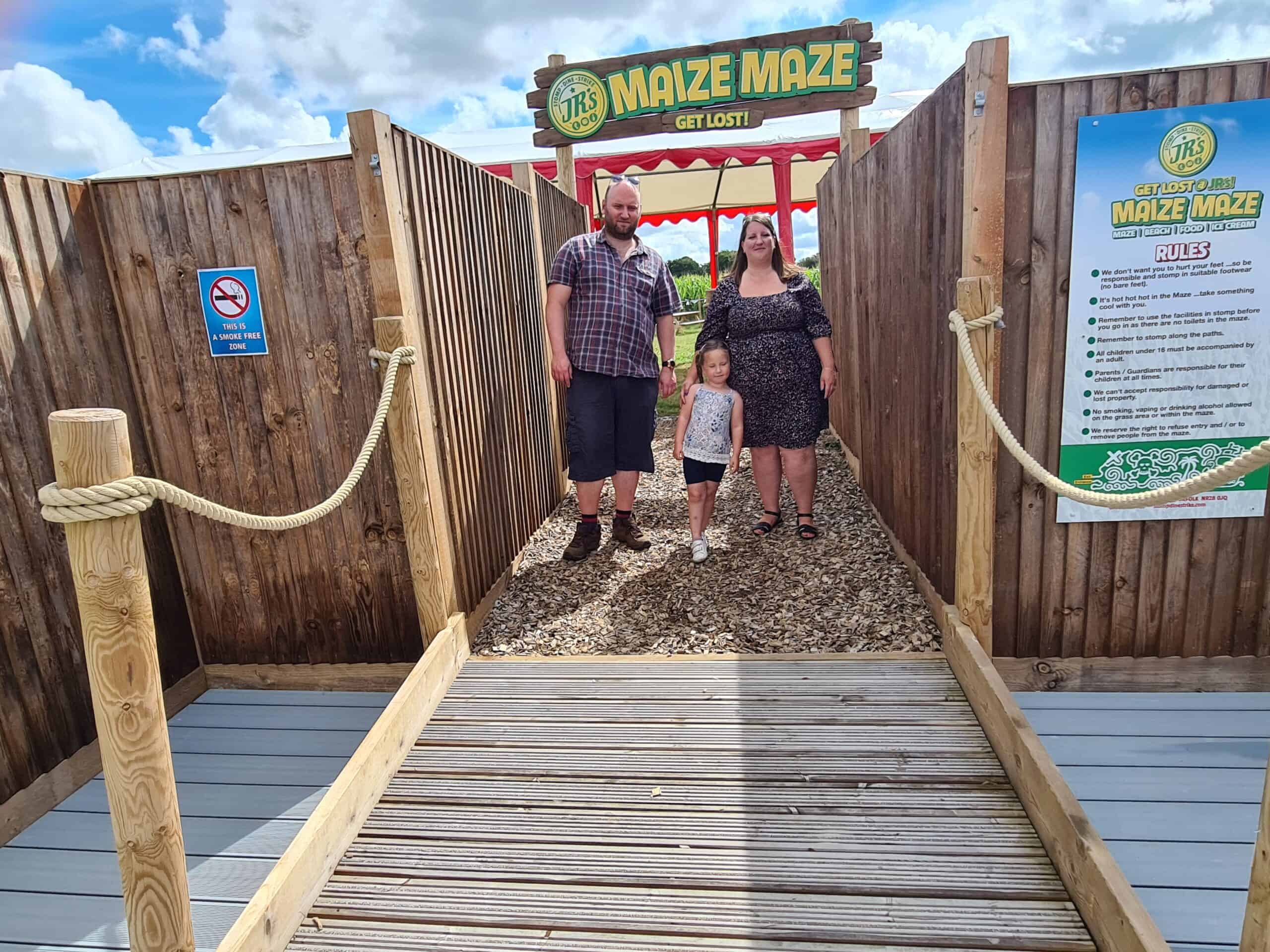 As a non-driving family thinking about going for a day out after lockdown wasn’t quite as easy as it might have been for a lot of people. We weren’t ready to go very far on public transport so our options were really limited. However, just down the road from where we live is a place called JR’s. It used to be something different a few years ago and I actually used to be the manager of the soft play and bowling alley. The change happened a few years ago now though but we hadn’t been in since then.

Now, JR’s isn’t ideal if you can’t drive. You can walk there but some of the road doesn’t have a pavement so you have to walk on the edge or you can walk around the edge of the field. I wasn’t sure if there was still a path on the field and I don’t like walking on the busy road with Erin so we got a taxi. This was only £6 each way from our house. If you do drive there is plenty of parking available.

JR’s is home to soft play, bowling and an American style diner, as well as some really exciting things that only run during the summer. Last year, in 2019, JR’s offered a maize maze and I think it was a big hit. We knew that it was somewhere that Erin would enjoy so we decided to make this our first day out. We paid £18 entrance for 3 adults and a child (special price this year) and this included the maize maze, outdoor ‘beach’, giant straw bales and the outdoor play area. Sadly, the indoor play area was closed. 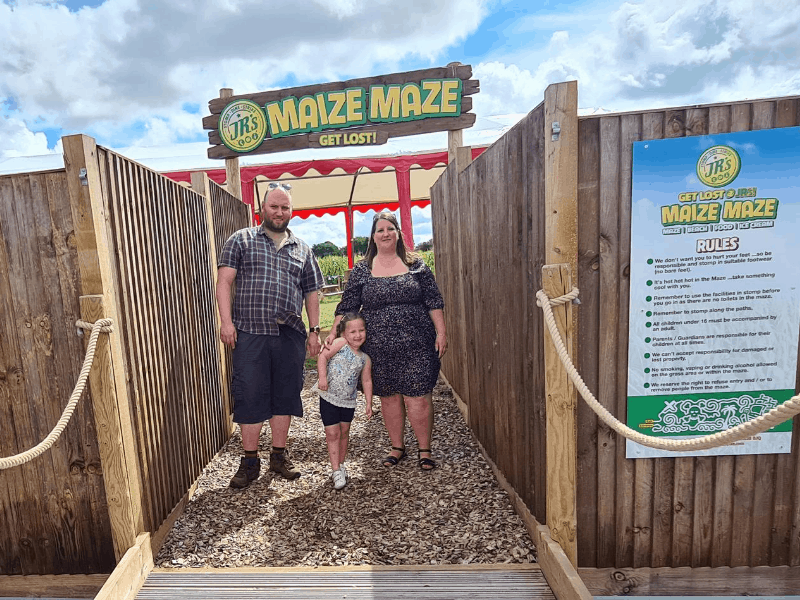 We were given some information upon our arrival such as where the toilets were, what the entrance included, where hand sanitisers were and a bit about the maze. It was funny because we got told that if we did get really lost then we could ring up and someone would come and help us! We got there at opening time and there was one other family waiting to go in. We felt really safe and that JR’s had done a lot to make sure their customers could have a great time and be safe at the same time.

To get to the maze we passed the outdoor play area and was then greeted with a huge field with load of picnic benches (both under cover and open), a man made ‘beach’, deck chairs and a huge straw bale to play on. I was really quite impressed. When I worked there this area wasn’t used at all so it was nice to see something amazing had been done with it. 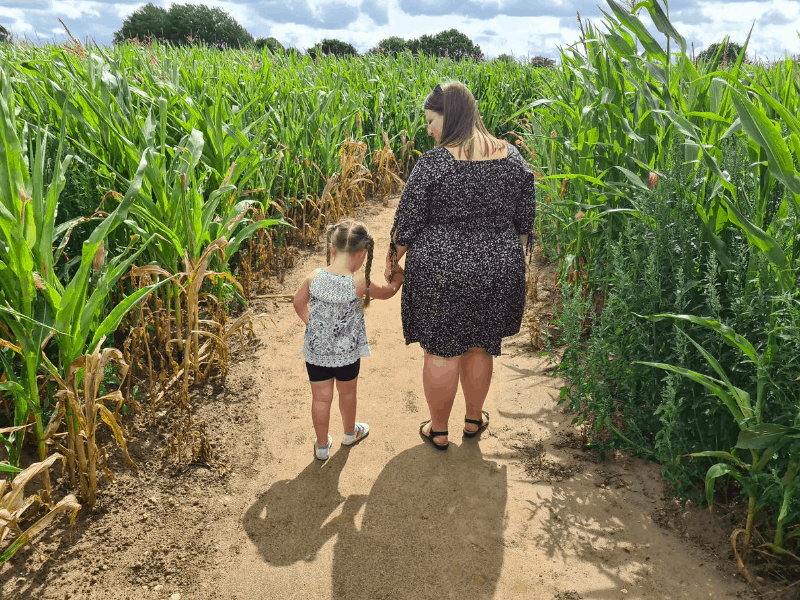 As we started the maze I regretted not taking a picture of the layout beforehand, just in case. I worried a little about it being so big that we really would get lost. Erin was really interested in what the maze was and all the different ways we could go. We pretty much left her in charge of choosing which way at each turn and we did find a lot of dead ends. The maze has plenty of arrows though so that you know that you’re going the wrong way. There are numbers to find throughout the maze too. Usually there would be stamps to collect but this can’t be done at the minute. 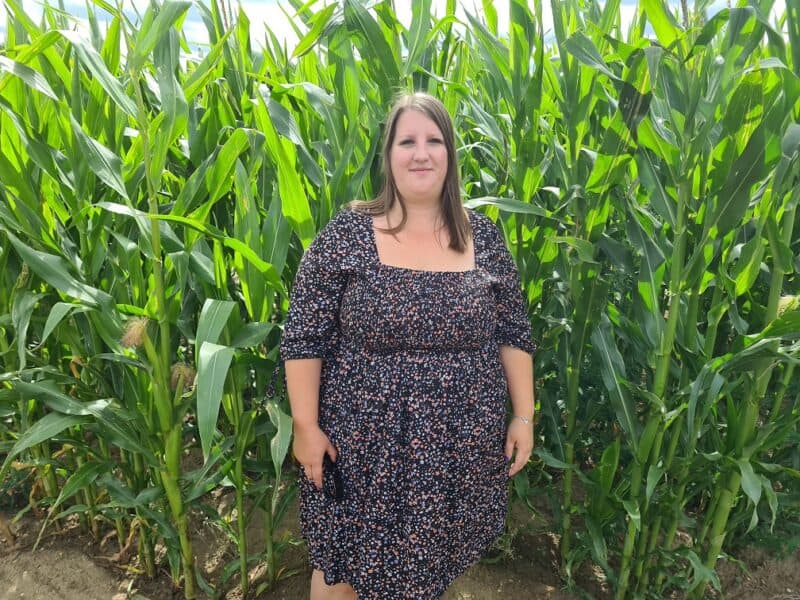 The maze usually takes somewhere between 1 and 2 hours depending on which way you choose to go. Somehow we managed to cut across the middle and we finished it after about 45 minutes. This wasn’t a bad thing though as Erin wanted to go back and do something else anyway so it worked out well for us. You can use the maze over and over again though if you want to.

We spent quite a lot of time using the other outdoor facilities. As we haven’t been able to get to the beach yet it was nice to see a big sandpit for Erin to play in. We took our own bucket and spades but they did have some at reception if you needed them. One of Erin’s favourite bits was the huge straw bales to run around on but she was a bit too small to get up herself so we had to help her. 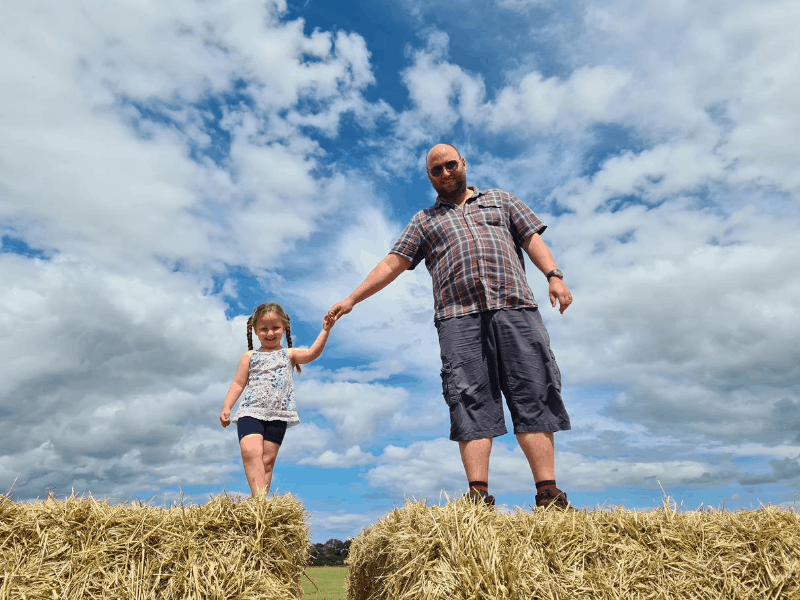 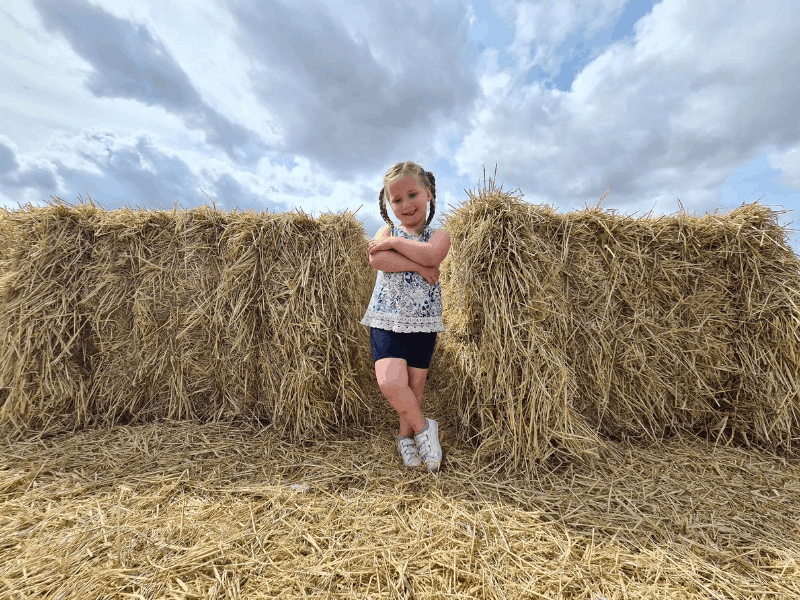 After a play it was time for lunch. You can order food to eat outside if you want to or there is the American diner inside as well. I don’t really like eating outdoors so we chose to sit inside. We visited on a pretty quiet day so we were the only ones eating at that time. It was actually really nice to have loads of space but the tables weren’t cramped together anyway.

The food at JR’s was really delicious and we all enjoyed our meals. For Norwich and surrounding areas we have something called a Spree book (that you pay for) where you get special offers and discounts at certain places so we were able to get a discount on our meals. However, the prices are pretty average but the food is definitely worth paying for. 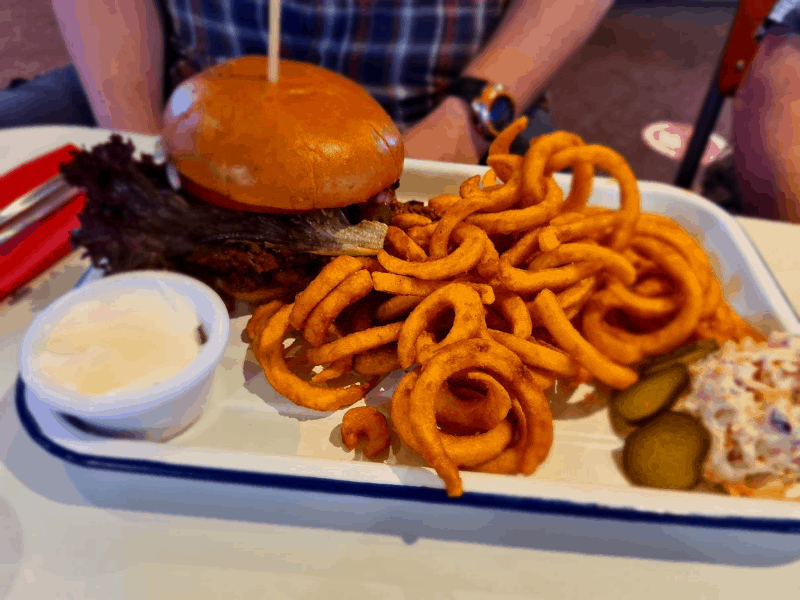 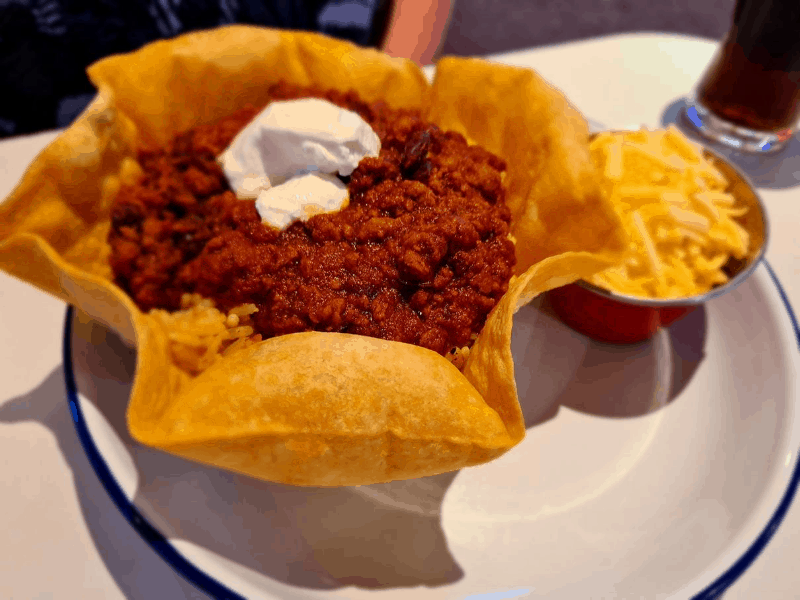 After lunch we headed back outside to do some more playing. The outdoor play area has some table and seating close by and this is where we decided to stay until home time. It was quite hot that day so we got some drinks from inside but they also serve things like snack and ice creams too! We stayed for 4 hours in total and there was plenty for Erin to do. I think she would have happily stayed longer if we’d let her! 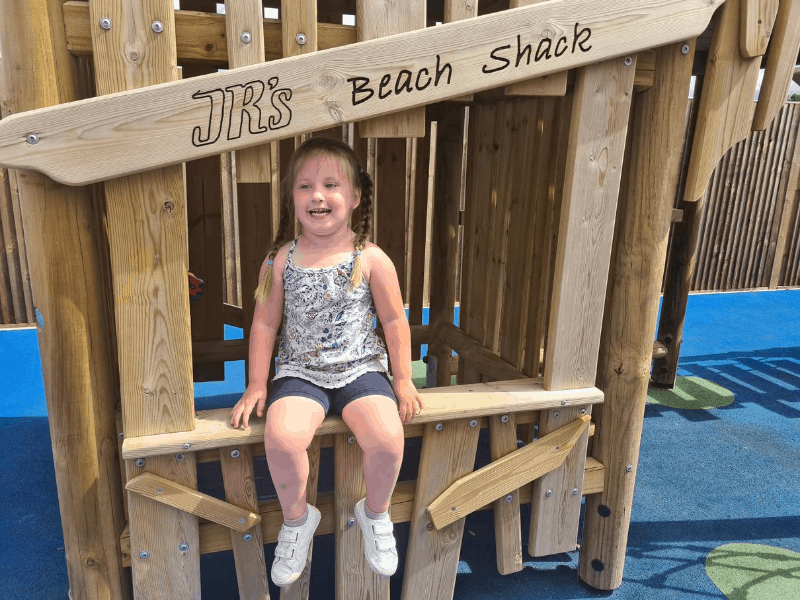 For £18 (plus extra for food) I think our day out was really good value for money. We had a great time and most importantly we felt safe. Staff were helpful and friendly and the food was definitely worth going back for! If you’re coming to Norfolk, or a local, JR’s is definitely worth a visit. 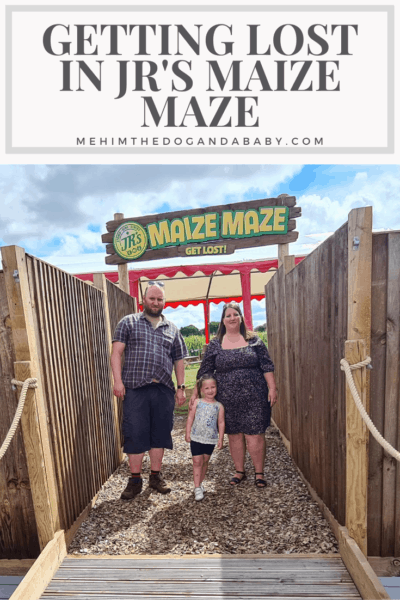