It seems as though I’ve been to London a hell of a lot recently and actually, I have compared to how much I normally go. Back in April I went for a couple of days away without John or Erin. I chose to stay at the Holiday Inn Express Park Royal which is in North Action.

Being located in North Acton means that the hotel is not in the centre of London. The good news though is that you can get the tube to North Acton station and you’re looking at about a 20 minute journey from Leicester Square area. The hotel is a 2 minute walk from the tube station. As I was going on my own, I felt very safe walking from the station to the hotel on my own and I know this was something John worried about. I loved how close the hotel was to the station.

As soon as I walked into the hotel I could smell how clean it was. There wasn’t an overpowering smell of chemicals but you could smell that everything was super clean. I liked that! I knew immediately what kind of condition I could expect from my room. Check in was really quick and easy and it only took a couple of minutes. I don’t like faffing around and the staff were very fast and still paid attention to any questions I had.

My double room was really pleasant and as I expected, very clean! The bed came with 2 hard pillows and 2 soft pillows, which I was thankful for. I’m really quite picky about pillows so it was really nice to be able to choose what I wanted rather than be stuck with something I didn’t like.

Strangely, the bathroom was the best part of the room for me. It wasn’t massive but there was plenty of space. The great thing about the bathroom though was the set up. Inside was a shower and toilet in a separate area. The door to the bathroom could either be closed completely or only on the toilet area. I thought this was a great idea as it meant someone could use the toilet while the shower was also being used by someone else.

In the rooms there are cards asking if you’re having a 10/10 stay. I actually tweeted saying I wasn’t because of the plug sockets. I know this is something really quite small but the plug sockets were no where near the bed. I needed to charge my phone overnight, and also use it as an alarm clock and I wanted it next to me. I had to have it on the other side of the room. 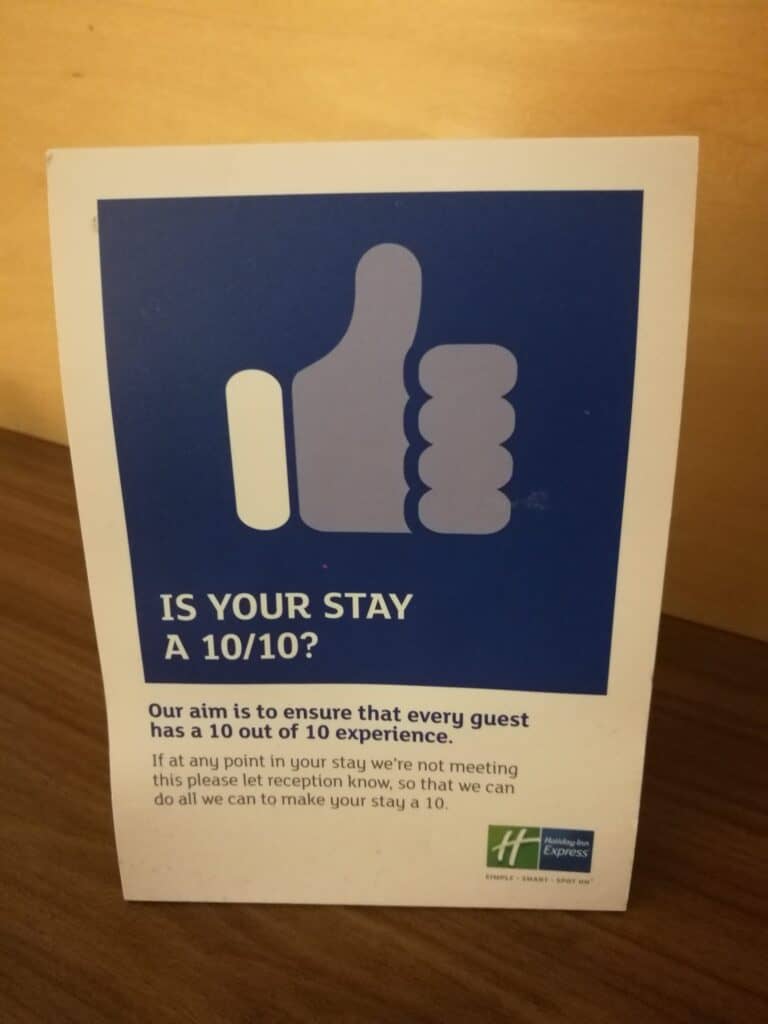 After my stay, the manager of the Holiday Inn Express Park Royal actually got in touch and said that they’re currently in the process of refurbishing and there will be sockets near the beds and USB sockets as well. I was really happy to hear of the upgrades and also the offer for me to be upgraded to a newer room should I stay there again.

Breakfast came included with my stay, which I always appreciate. There was a range of hot and cold food including, muffins, pastries, breads and cereals as well as beans, toast and sausages. The breakfast was to an okay standard but it wasn’t amazing. However, I have certainly had worse hotel breakfasts and as it’s included in the price, I can’t really moan too much.

Overall, my stay at the Holiday Inn Express Park Royal was pretty good. I slept really well and I got to eat something before heading out for a busy day in London. While this hotel is not central, I would definitely stay there again.