In April I attended my first ever Blog On Conference. The trip to Manchester from Norfolk was a very long one, especially with a toddler in tow. Actually, John sorted Erin out for the majority of the train journey while I either slept or watched YouTube videos. Having only been to this city once about 10 years ago, I made sure I booked a hotel as close to the train station as possible and that was Motel One Manchester. There aren’t many hotels closer than this, with it being a short walk away. When I say short, it’s across the road. After a long journey, this was perfect.

First impressions of the hotel were really good; excellent in fact. I’d actually cancelled a different hotel booking a week before our stay and chose this one instead as it came up at a better price. I am so glad I did. There are two entrances to the hotel, one straight into the bar and one into the dining area. There were fake fires playing on large screens, mirror balls on the ceiling and a fresh but bright colour scheme. Check in is not until 3pm but you can leave you bags/ cases there before this time if you want to, which is what we did.

When we returned to the hotel to check in, it was very quick and very easy. We asked to add breakfast to our stay for both nights which was no problem at all and the extra payment was added on. We were asked how many room keys we wanted, which I thought was very nice. Just because John and I were there together with Erin didn’t mean we would be together all of the time.

The good impressions continued as we went up to our room. As we went in, the first thing I could see was Erin’s cot. It matched the hotel’s colour scheme which I thought was a really nice touch. The entrance to our room was a little bit narrow and we have a really small stroller! If you had anything bigger then there would not be very much space at all! As long as you can fold a pushchair, you’re fine though!

Luckily, the main part of the room was really quite spacious. John and I had a lovely, big bed while Erin’s cot was perfect for her. The room had a little desk area, chair, television, tea and coffee station and 2 clothes rails. Motel One has some fun space saving ideas but some are not all that practical. One of the clothes rails was hidden next to one side of the bed while the other was right at the top of the full length mirror. Had we actually hung clothes there I wouldn’t have been able to see in it!

All three of us slept really well both nights so I really can’t complain about the quality of the beds or the room. We also had a pretty great view from our window, which was a nice little extra!

The bathroom, like the space saving ideas, was a little badly designed. The shower, although really nice to use and really spacious, had a tiny shelf to put shampoo etc. The shower enclosure itself was very open at one end without being able to close a door. Now, for most people this would be absolutely fine but with a slippery, wet toddler not so much. Even though I had a few niggles, the bathroom was spotlessly clean and very modern.

Breakfast cost £9.50 each (Erin was free) but I don’t really think it was worth it. The breakfast was continental and consisted of the normal breads, danishes, cheese, meats and cereals. The food items available were of higher quality than I have had in a lot of hotels but for the price, at least one hot option would have been nice. Although I think the breakfast was overpriced, there was plenty of room for us to get what we wanted on both mornings and there was also space for us to sit with Erin in a highchair.

Motel One has both good and bad points but the good far outweighs the bad. I did actually really enjoy my stay here, so much so that I booked to stay at the Motel One Manchester again for Blog On Christmas! This time I won’t have John or Erin with me though so I won’t be paying for breakfast. I’ll go to Wetherspoons up the road! 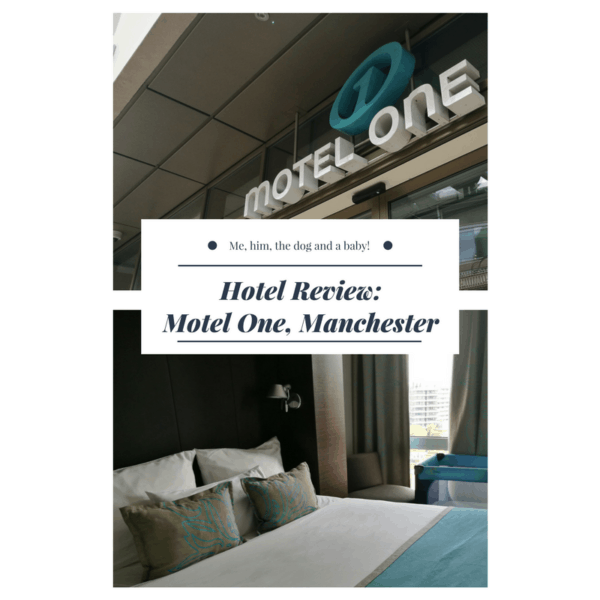