I have been to London quite a lot already this year and it’s only June, with another trip booked for a couple of weeks time. I really hate staying in the same hotels in London because there is so much choice. One of our recent stays was in the ibis Styles London Kensington.

The ibis Styles London Kensington is situated a 5 minute walk away from Earl’s Court tube station so it is really accessible from anywhere in London. Earl’s Court is also an accessible station which made things a hell of a lot easier having Erin with us.

Our only issue was that the entrance to the hotel is up a couple of steps. Had I been on my own with Erin, and also had luggage with me, I would have really struggled to get up those steps. Had this been stated anywhere when I booked, I may not have in the end.

Upon entering the hotel, I was pretty impressed. It was certainly one of the most different hotels that I have stayed in and I have stayed in a fair few. The reception of the hotel has a bar and seating area, decked out with iPads for the use of guests. There is also a small children’s play area, free hot coffee and a computer to use if you need to. There is no printer but reception will print out anything you need if you email them.

Check in was lovely and smooth even though there was only one person working at reception and there was a couple of people waiting as well. We had requested a cot to be put in the room and they said this had already been done that that was a bit of a relief.

Our room was on the basement floor and a couple of doors down from the breakfast room. This was honestly perfect for us. Upon opening our hotel room door I didn’t know what to expect after seeing how cool the reception was. Well, the rooms are no different! On the back of our door was a picture of a boy and a duck while above our bed was a picture of a parrot on a bike! 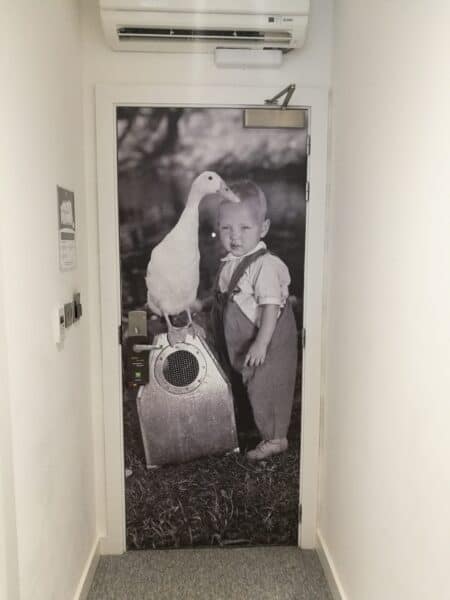 The room was lovely and spacious and Erin’s cot had been put in the window area. There were light curtains and also black out curtains so there was no chance of her waking up from the light. Unlike other hotels we have stayed in, the ibis Styles London Kensington also put in a little duvet which was really thoughtful.

To one side of the bed was a lovely desk with lamp and tea/ coffee making facilities and then, next to that, was space to hang your clothes and put your luggage. I was so thankful for the desk space because I did need to do some work while I was away. Also, Erin and John go to sleep so early so I need somewhere to sit and do something! 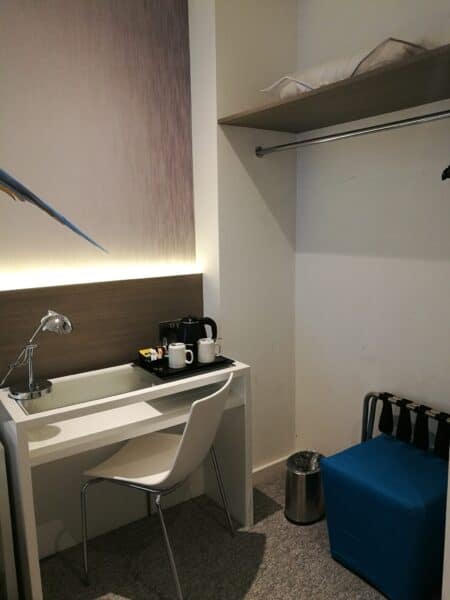 The room also had a TV mounted on the wall opposite the bed which Erin loved watching! She really loved sitting in a big bed, surrounded by pillows, us and a duvet and watching Paw Patrol in the morning. I wish I’d taken a photo but I was too happy enjoying it! The photo below was as close as I could get! 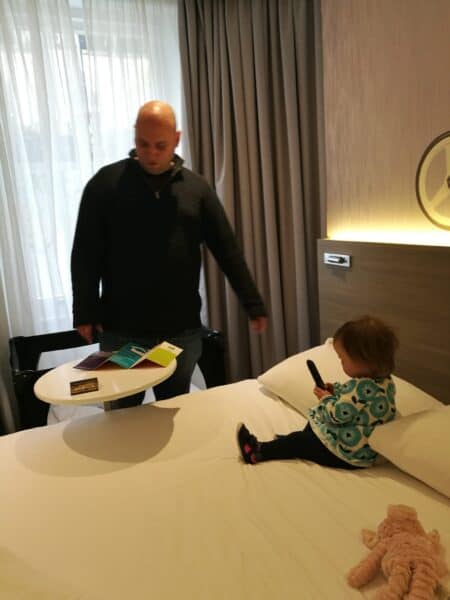 Breakfast is included in the price of your stay and I love that! Erin wakes up super early so being able to go for breakfast at 6:30 was perfect for us. It is served until 10am or 11am on weekends though so there is plenty of time. There was lots of choice and we all managed to eat quite a lot on both mornings that we were there. Breakfast is a continental buffet but you can pay for a cooked breakfast if you wish to do so.

Breakfast is served in a really cool dinosaur themed room and Erin was fascinated by the walls. The staff working during the morning were amazing and I have to say how nice it was for them to come over and talk to Erin. She is a bit of an attention seeker anyway but it is lovely when staff make the effort with children, especially because they don’t really have to.

The reception staff at the ibis Styles London Kensington couldn’t have been more helpful. I need a couple of tickets printing out for attractions we were going to and they were more than happy to help. I emailed over what I needed printing and they were done and ready for me to collect a couple of minutes later.

Overall, I absolutely loved our stay at the ibis Styles London Kensington. Even though the entrance is a bit annoying, I could definitely deal with it if John was with us as well. The location was also fantastic for us as Earl’s Court has loads of restaurants close by and a small supermarket so we could get everything we needed!