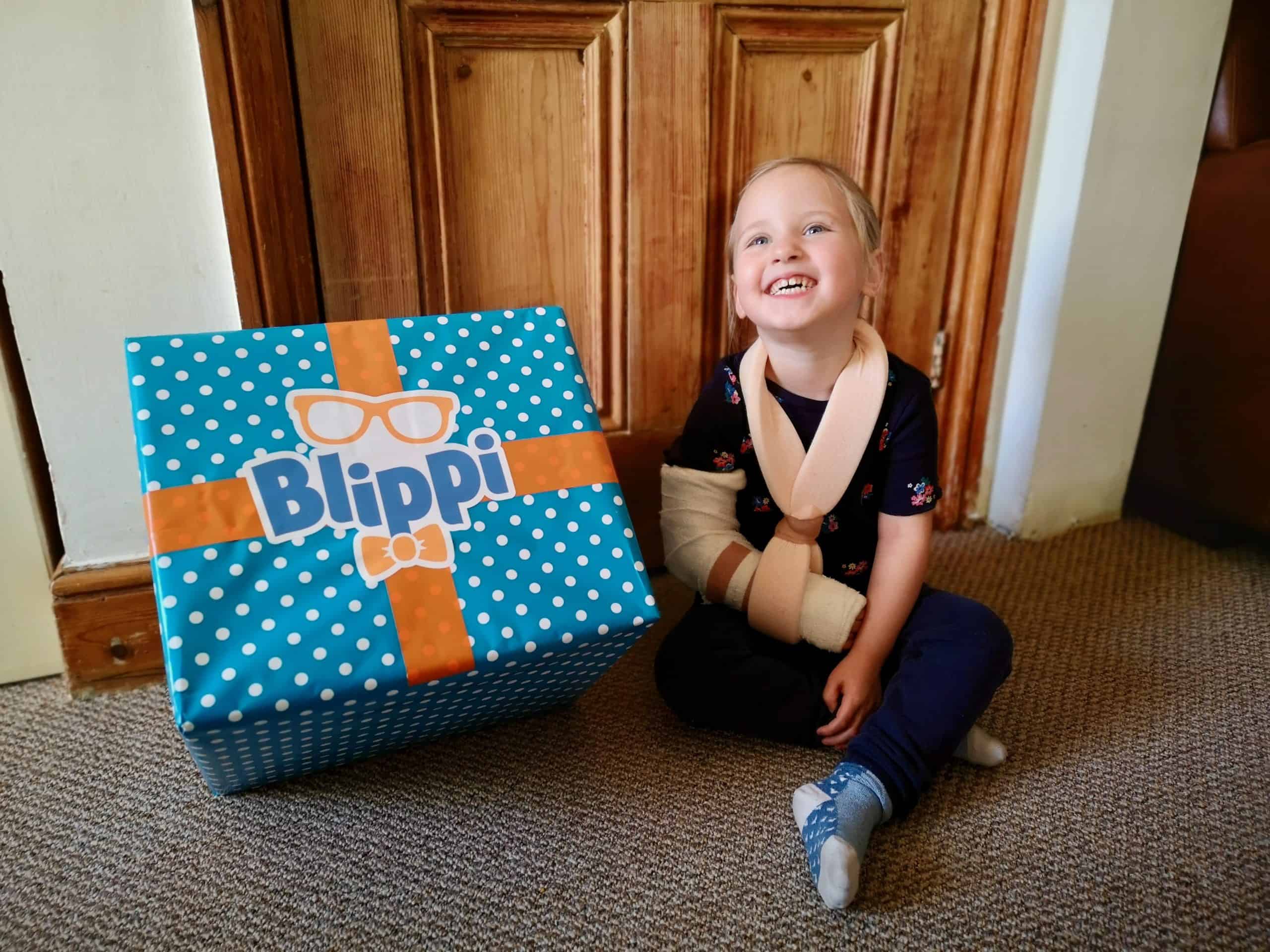 When we started to let Erin watch YouTube I wondered what there might be for children her age. Obviously, that’s not something I went looking to watch on my own. Erin quickly found a couple of favourites and one of those was Blippi, an American channel full of fun and educational videos for children. There haven’t been many days that have gone by since then that Erin hasn’t watched at least one Blip video and we’re always waiting for a new one to be uploaded.

Although Blippi has been a huge hit here in the UK for some time now there hasn’t really been any merchandise available. A few weeks ago though a whole range of Blippi toys was released here in the UK and Erin was so lucky to receive a super exciting box with them in. Erin couldn’t wait to get straight in there to see what goodies were inside. 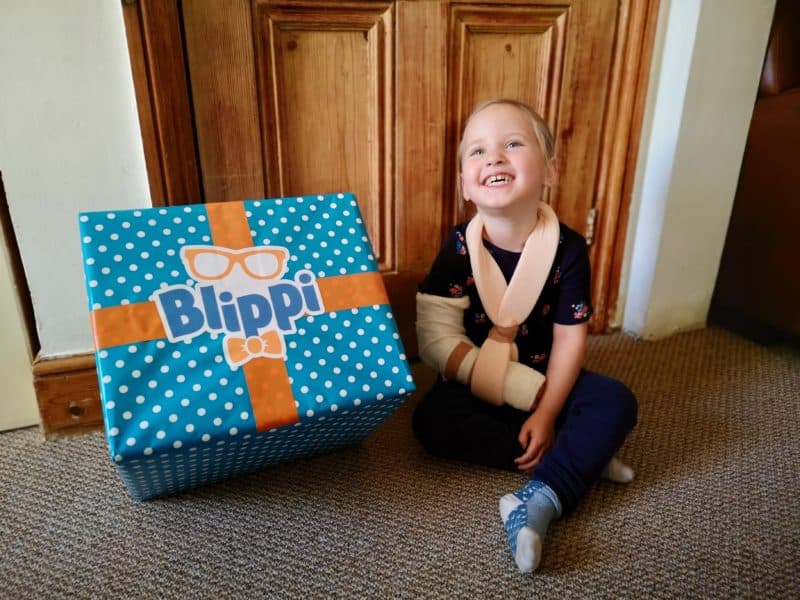 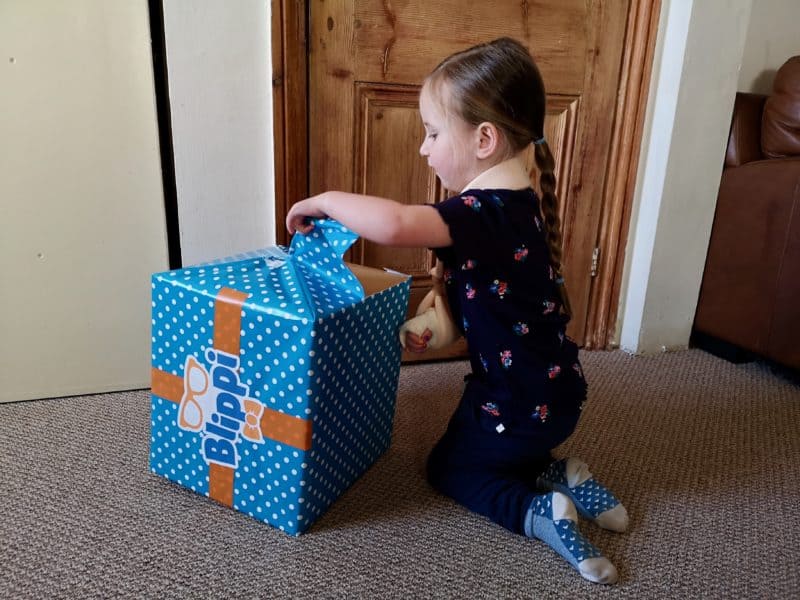 To start with, the fact that our box came dressed up in Blippi branding and colours was a big hit with Erin. She helped to spell out his name and instantly saw the glasses and the bow tie. She had a lot of fun ripping the paper off and getting into the box but she had a lot more fun with what was inside. This is what she got sent: 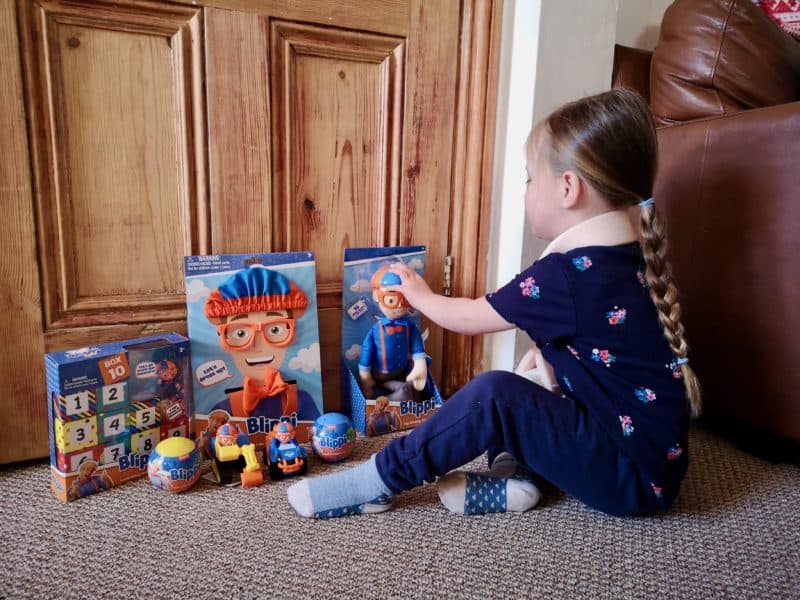 As a parent, the first thing I noticed was that none of the toys were overly expensive. With our lowest price point being £3.99 and the highest being £17.99 I didn’t feel like anything was overpriced or too expensive to buy had Erin seen the toys in a shop. I think a lot of the time with really popular toys or characters the merchandise is so expensive and over the top and that puts me off, especially if there are collectable items. 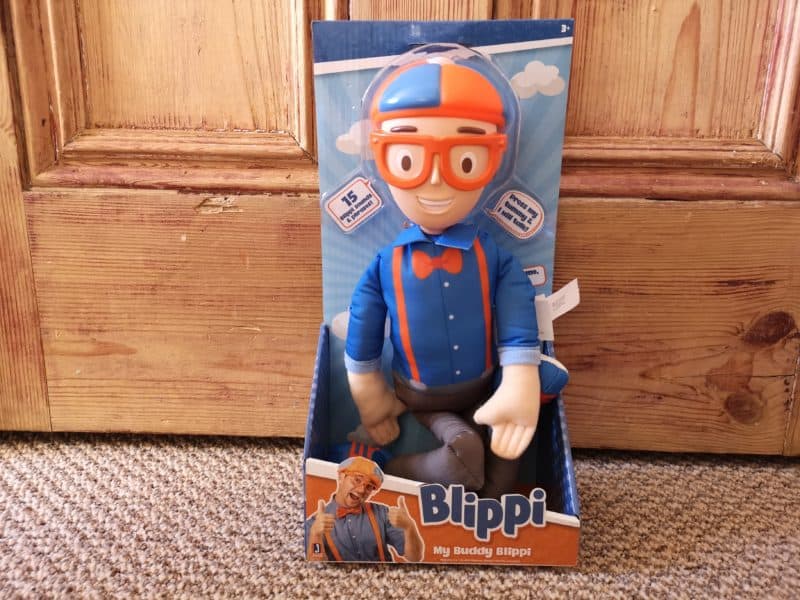 A quick favourite with Erin was the My Buddy Blippi Doll. The body of the doll is soft while the head and glasses are made from hard plastic. Blippi can say 15 different phrases and they are things children can easily recognise from the YouTube video. As Erin played with the My Buddy Blippi Doll she started to make up conversations between them both and copied what he said. For the price, I think this is a great toy and has enough different phrases to make the price good. 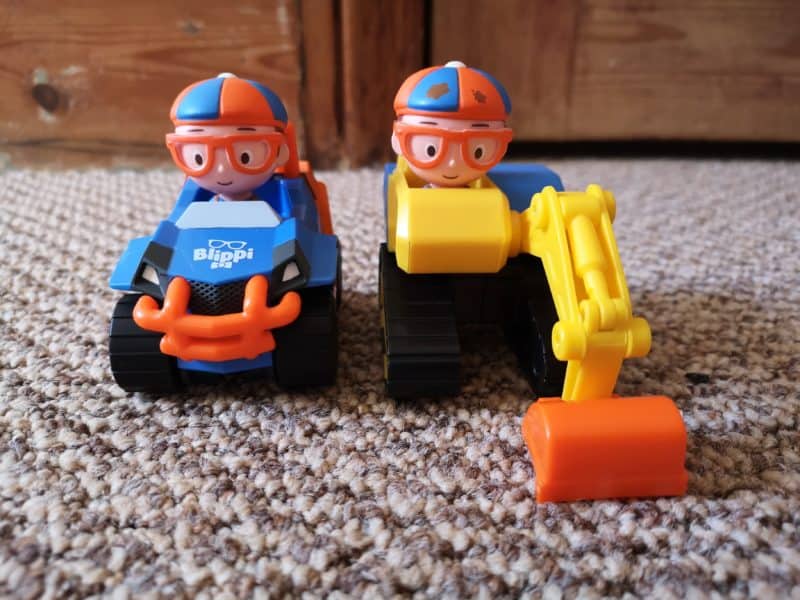 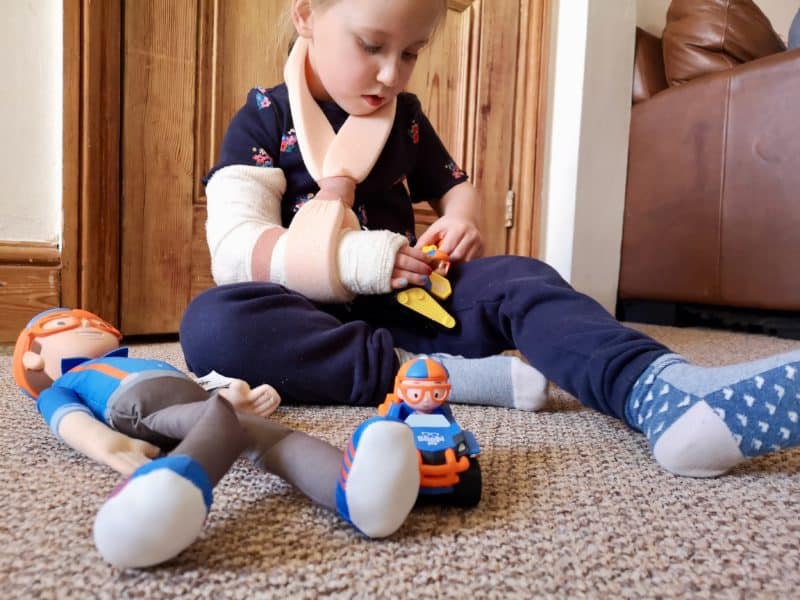 One of Erin’s favourite Blippi videos is the one with the excavator song so she was so excited when she saw she had an excavator vehicle, along with Blippi figure sat inside. She was also sent another Blippi vehicle with character inside as well. These vehicles are quite small and cost £5.99 each but Erin has played with both of them a lot. The excavator especially can be used with her other toys and construction sets so can be used a lot more. 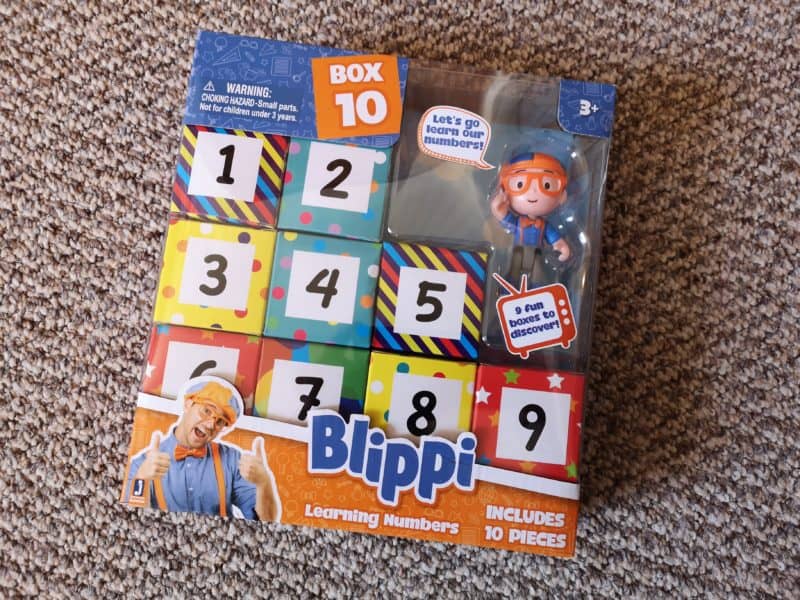 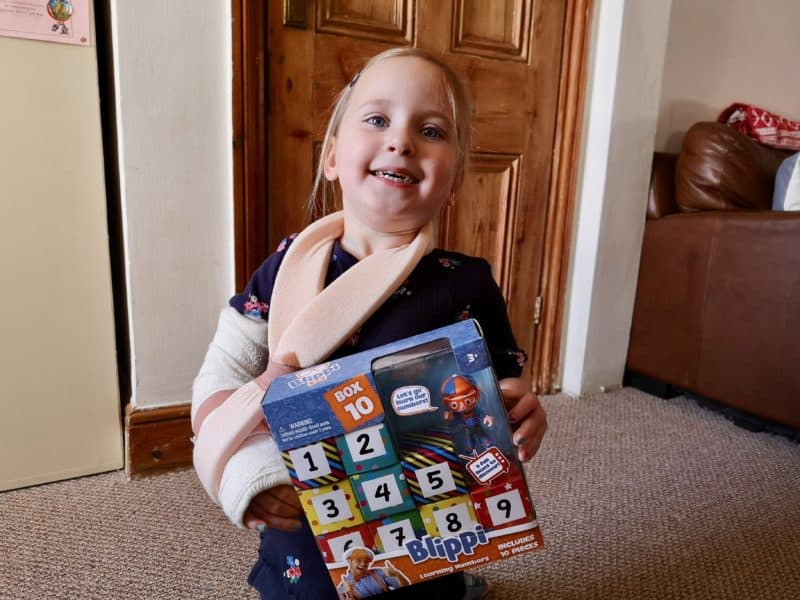 The Blippi surprise boxes was a really fun toy and not something I’ve really seen before. You get nine small boxes to open and one Blippi figure. This toy is designed to help children learn numbers (a colour option is also available) so inside each box there is something that goes with the number on the front e.g. a dolphin for box 1! After you have opened these for the first time there isn’t quite as much to do for older children but maybe you could use them to add new items and play again. 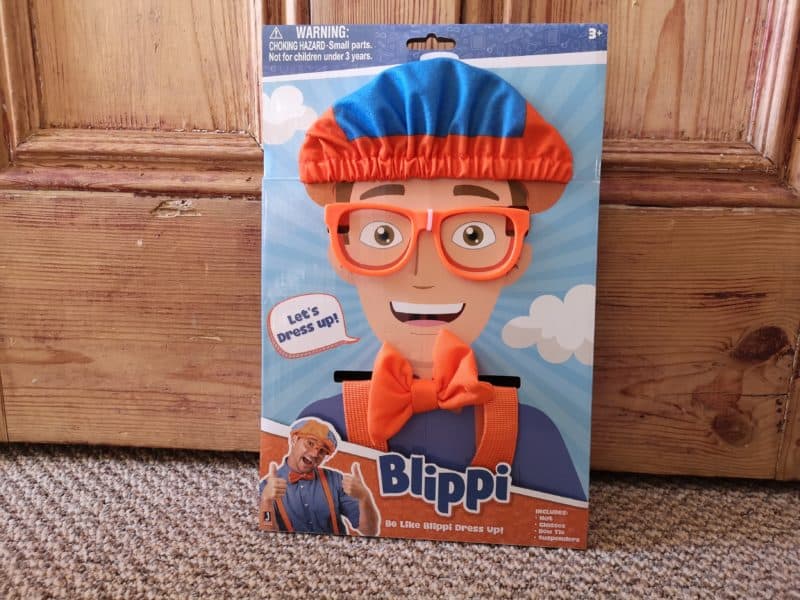 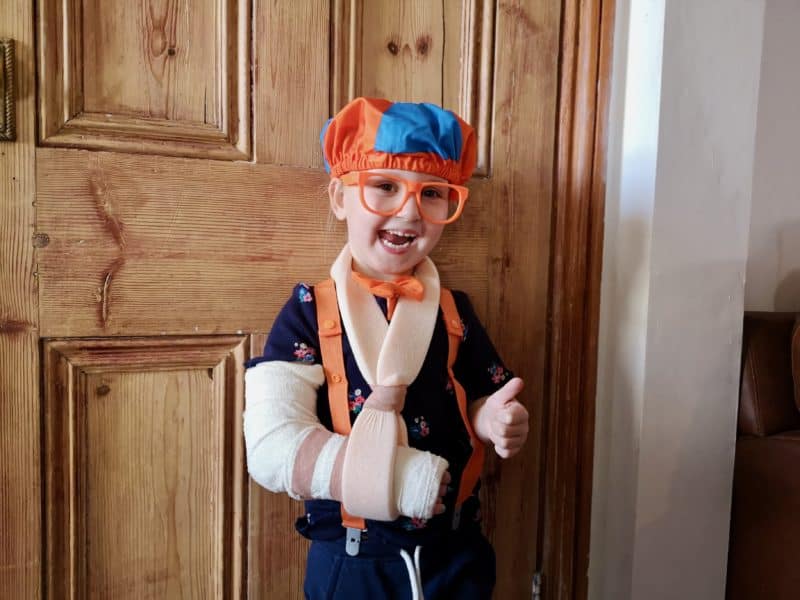 My personal favourite of the Blippi toys is the Dress Up Roleplay which only costs £11.99. With this you get a hat, glasses, braces and a bow tie. I was a bit worried Erin wouldn’t be able to wear this very well with her broken elbow and cast but we figured it out and she looked absolutely adorable dressed up as Blippi. The braces are adjustable too so you can make them shorter if you need to which I think is a really nice feature for smaller children. 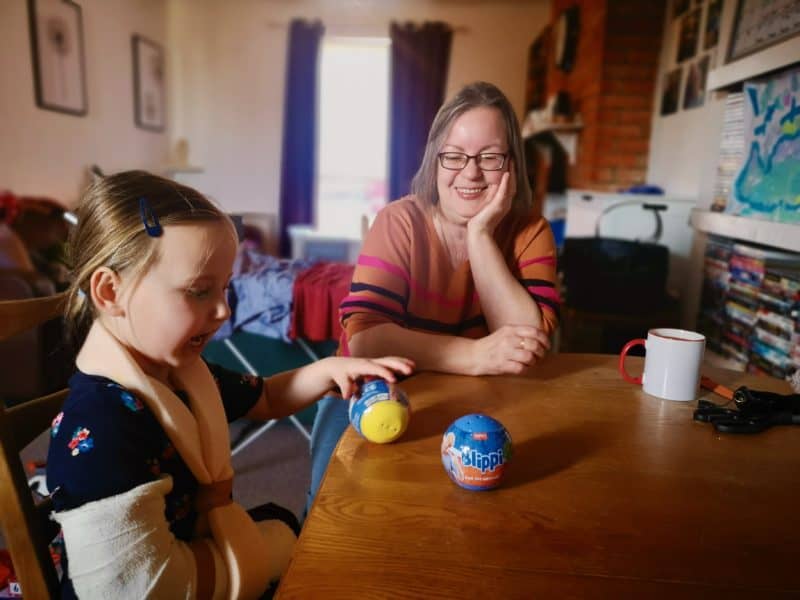 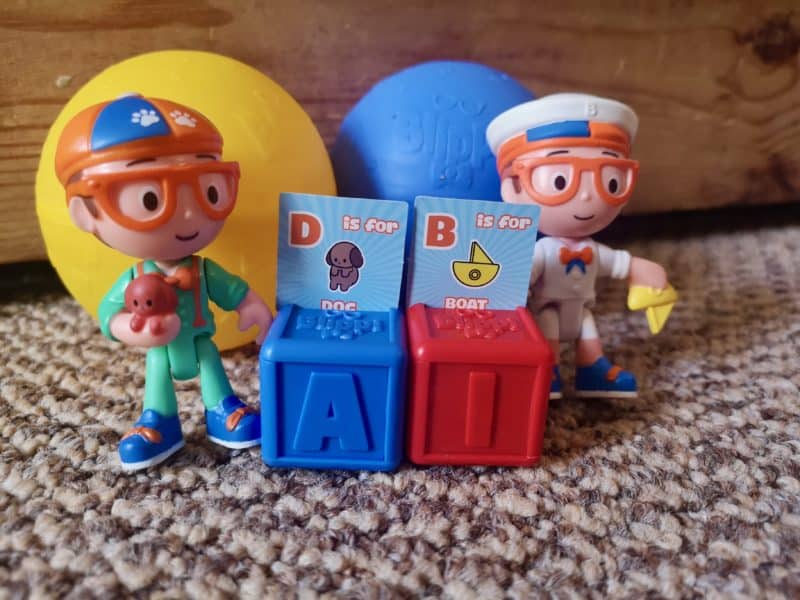 Last, but not least, we have the Ball Pit Surprise toys. These are like blind bags in the shape of a ball and cost £3.99 each. I liked that there was a pocket money priced option with the toys as Erin could easily save hers for one of these if she wanted to. Inside the balls there is a box with a letter to learn and a Blippi figure holding something that starts with that letter e.g. Blippi and a dog for D. Considering you get a Blippi figure in each ball I think these are great value for money and I would happily buy Erin more if she wanted to collect the set.

Overall, I’m really happy with all of the Blippi toys Erin was sent. Nothing is too expensive and I think you get quite a lot for your money. Other YouTube stars have their own merchandise that is quite overpriced and I refuse to buy it for Erin but not this time. Now we’re on a mission to collect all of the small Blippi characters from the Ball Pit Surprise balls! 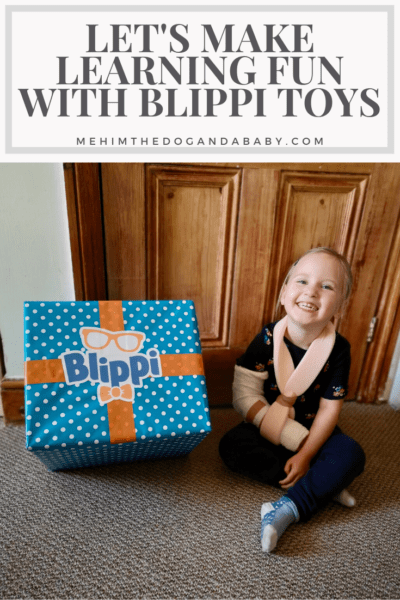