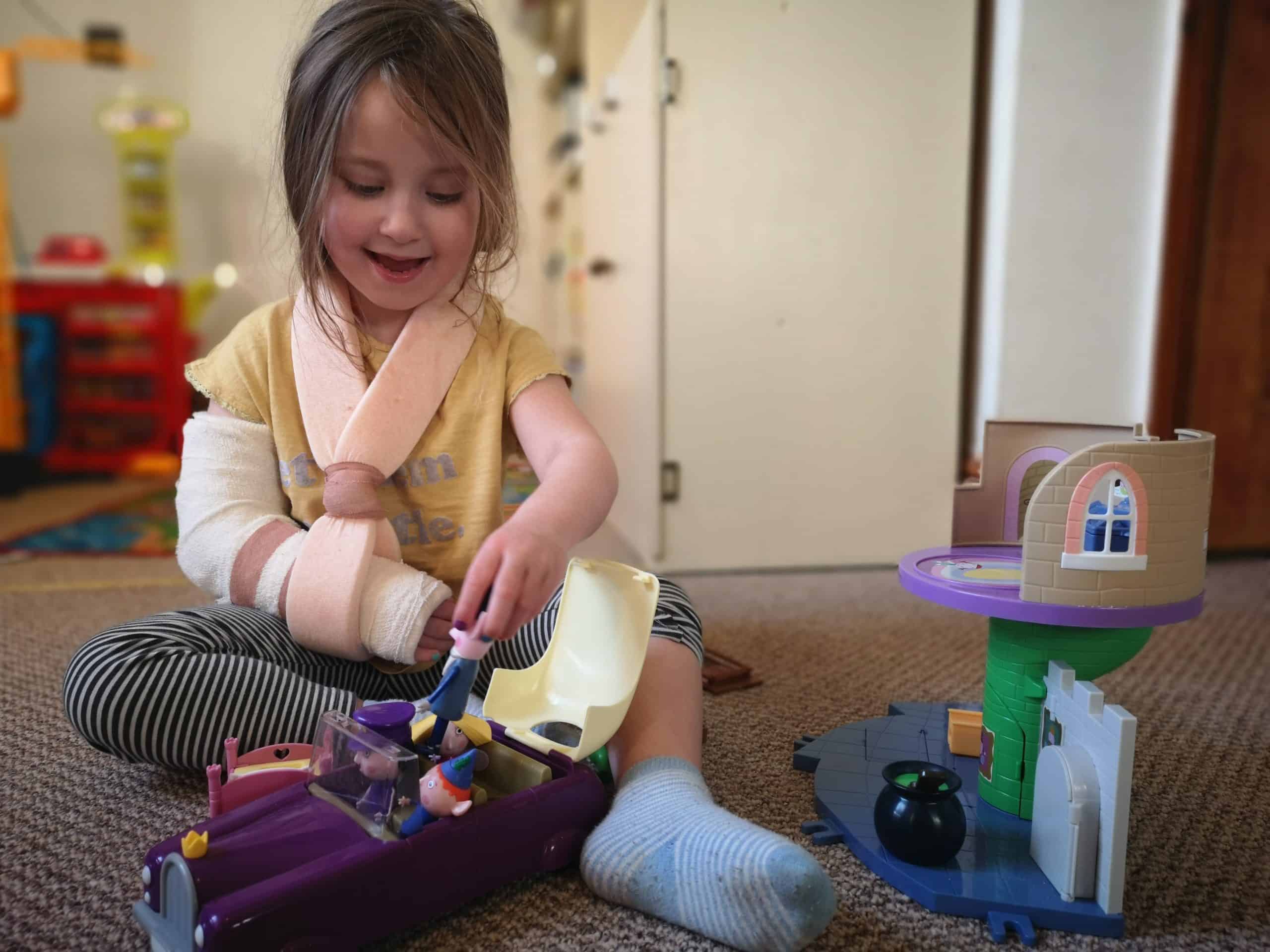 Sunday here is a day where John and Erin usually go out for a few hours together and then play at home in the afternoon. This particular Sunday was really no different. John and Erin were playing upstairs together when all of a sudden I could hear crying and Erin saying she just wanted me. I left it a little while as sometimes Erin can overreact but when she didn’t stop, I had to go up to see what was wrong.

Erin was very quick to come to me but wouldn’t let me anywhere near her right arm. I went to touch it and cry winced and cried a lot more. We had a cuddle for quite some time then went downstairs to try to calm her down. Although she had stopped crying Erin was still very careful with her arm. She wouldn’t lift it and she wouldn’t bend it. After a little while we decided to call 111 who said we should go and get it looked at. 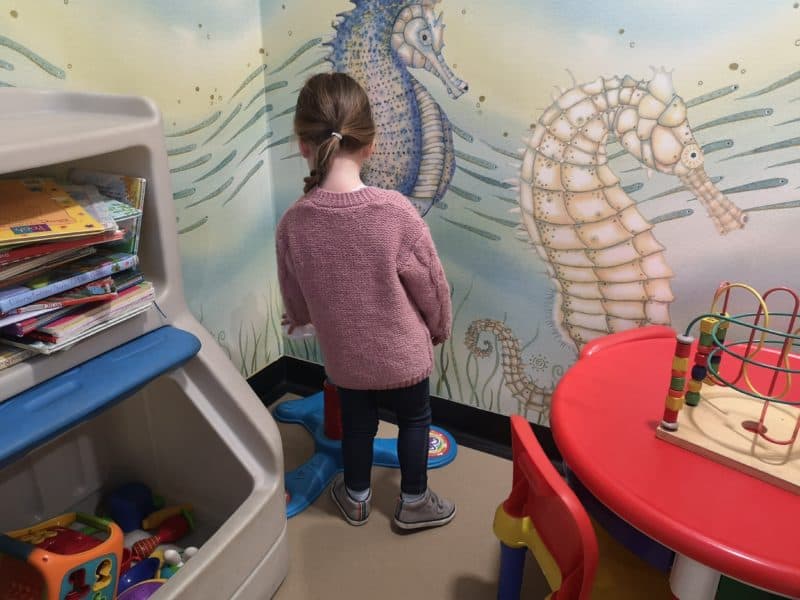 Now, we don’t live anywhere near a hospital. We have a minor injuries department about 15-20 minutes away by car or the big hospital with A&E which is about 30-40 minutes away. To start with, the minor injuries department closed at 8pm on a Sunday and they said we had to be there by 7:30… this was at 7pm. The next thing is that we don’t drive so we had to call a family member to ask for help. We didn’t get to minor injuries in time and were told we either had to go to A&E where there was a 2-3 hour wait or come back in the morning. As frustrating as it was, we decided to go back in the morning and hoped that Erin’s arm was just sore.

Unfortunately, the next morning we went back for an x-ray and we were told quickly that Erin’s elbow was broken. It was the worst we could have hoped for. Erin didn’t seem to care though and smiled through having her x-ray and also having her arm put in a plaster cast. At the time, she seemed really happy with it and thought it was really cool. 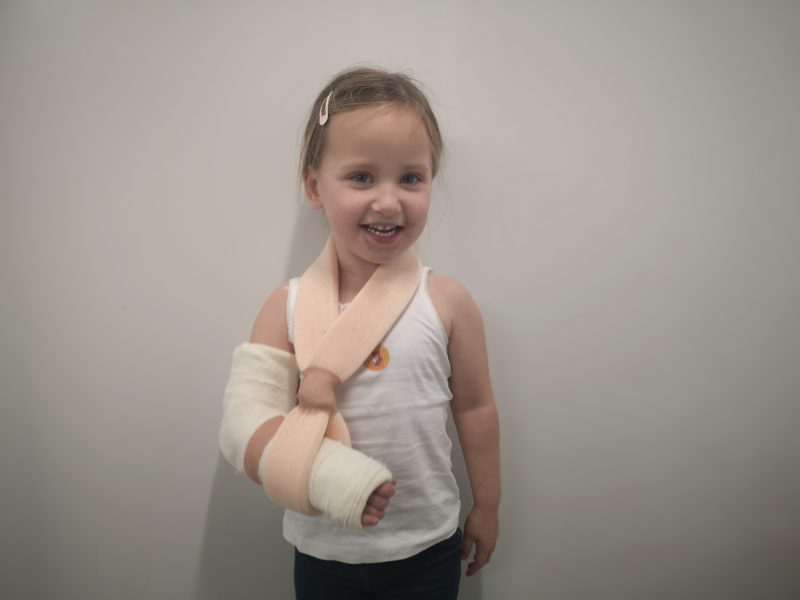 It wasn’t long until Erin realised that having her arm in a cast and a sling was really quite rubbish and she couldn’t do everything as she normally would. She quickly realised swimming and the park was out of the question and she couldn’t be her usual insane self. For the first few days Erin was miserable. One day she even went to bed and said she didn’t want to come back downstairs because of her arm. It broke my heart to see her so down.

Luckily, the big cast was only on from Monday to Thursday as we then went to the big hospital to have the cast changed. We thought we would have a really long visit but when we arrived at the cast room there was no one waiting and we got seen straight away. Erin was immediately happier with her lighter cast in a really funky purple colour. She was also made up that she didn’t have to wear the sling any more. 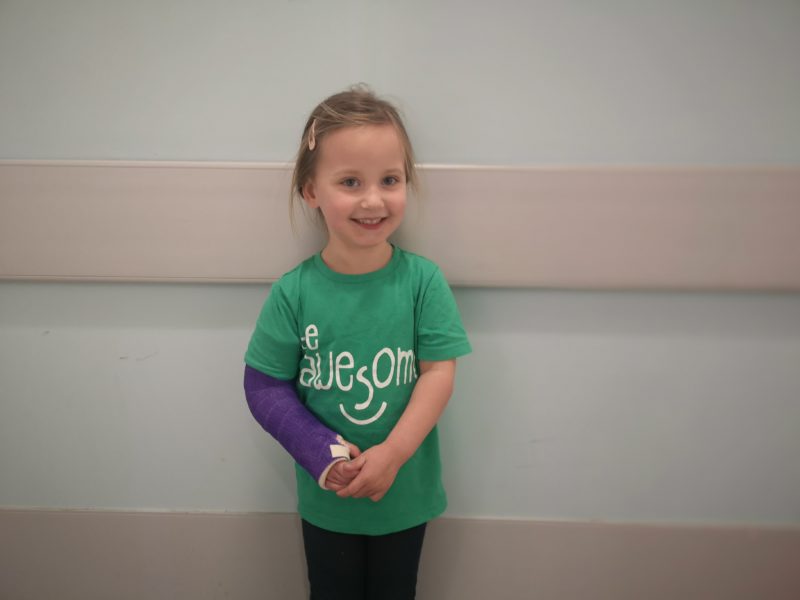 I won’t say that having the lighter cast has been without it’s issues so far. Erin has had it on for a week so far and every day she complains that it itches. We’ve tried cooling it down with a hairdryer but it isn’t working so far. Erin has figured out how to do most things normally again which is great and she’s gone back to nursery now so she’s not quite as bored as she was at home.

The one thing we are struggling with is washing Erin’s hair. We don’t have a shower and we can’t buy one of those arm covers as the cast goes up too high. The seal on the cover won’t go over the cast so we don’t have any way to give her a real bath or to wash her hair in a nice way. It’s awful to lay her backwards over the bath and she hates it. It’s not easy to wash her hair this way as getting underneath the hair is incredibly hard and it takes quite a while to make sure it’s washed properly. I bet Erin can’t wait for a real bath.

I’ll be completely honest, I don’t really know how Erin got to 4 without breaking something. She’s such a crazy child and is always throwing herself around and has no fear whatsoever. I do think that Erin is coping better than expected though, especially in the first days where she smiled her way through hospital appointments and different people looking at her.

We’re now on a countdown to the cast coming off, which should be the week before we go to Center Parcs. I know Erin would be gutted if she wasn’t able to swim then so we’re keeping our fingers crossed that everything is okay and her elbow heals well. 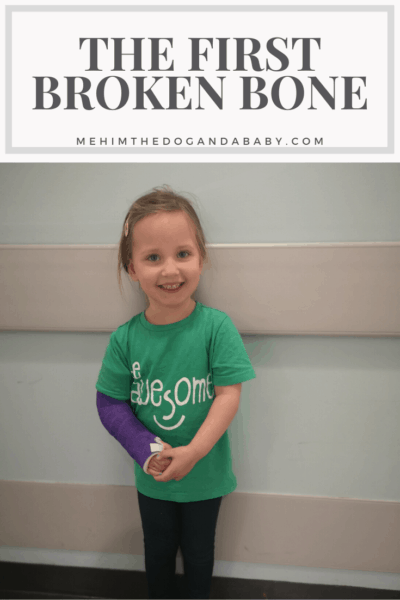 8 thoughts on “The First Broken Bone”