My sister Natalie is back today with Part 2 of her review of the London Stationery Tour!

Liberty is worth visiting in and of itself, let alone for the stationery department. The store itself is beautiful and they sell a wide variety of high market products, from the usual perfume, make-up and clothing, to antique jewellery and home wares from around the world. It’s expensive but not always unaffordable. The home ware department is really quirky and interesting and although a lot of it is well beyond what i can afford there is plenty that is surprisingly affordable. There’s also a great chocolate department which sells a lot of British products and also products from smaller companies. One of my favorite things about this store is that you will find things that you cannot find in chain stores.

The stationery department sells various upmarket collections, such as notebooks by Christian Lacroix. There is plenty that is affordable though, i shop here fairly often myself. It does feel like you’re treating yourself a bit since it does cost more than ‘basic’ stationery, but the quality is great and it’s nice to buy something a bit different. There is also a lot of Liberty themed products, such as gift cards and notebooks, and, as i discovered by going on this tour, they now sell Liberty print washi tape! I was so excited about that one. If you’re visiting London and would like some nice stationary for souvenirs then this is a good choice. Liberty prints and quintessentially British and I think that being able to buy them in notecards or notebooks gives you an opportunity to buy something which is usually fairly expensive as a more affordable product. 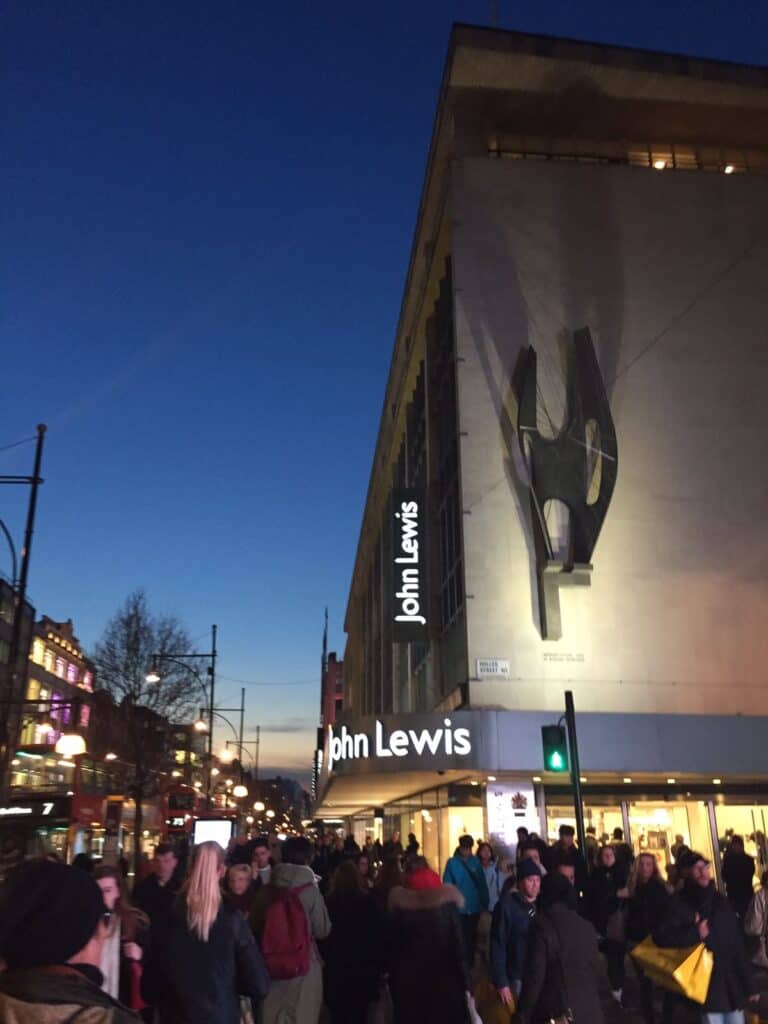 John Lewis stores in generally sell a good range of different stationary products, but the Oxford Street store has a huge selection. I’m a fan of John Lewis in general but even I was surprised by how much was here. John Lewis sells its stationary is sections of brands, so for example there is a table of Kate Spade products here (the largest selection of this that I’ve seen in London). John Lewis does have its own brands of stationery products but it does mostly sell brands that you could find in other stores, such as Pusheen or Disney. This store also has a large section of gift cards and gift wrap, along with a wall of Filofax products – again, the largest that I have seen in London. 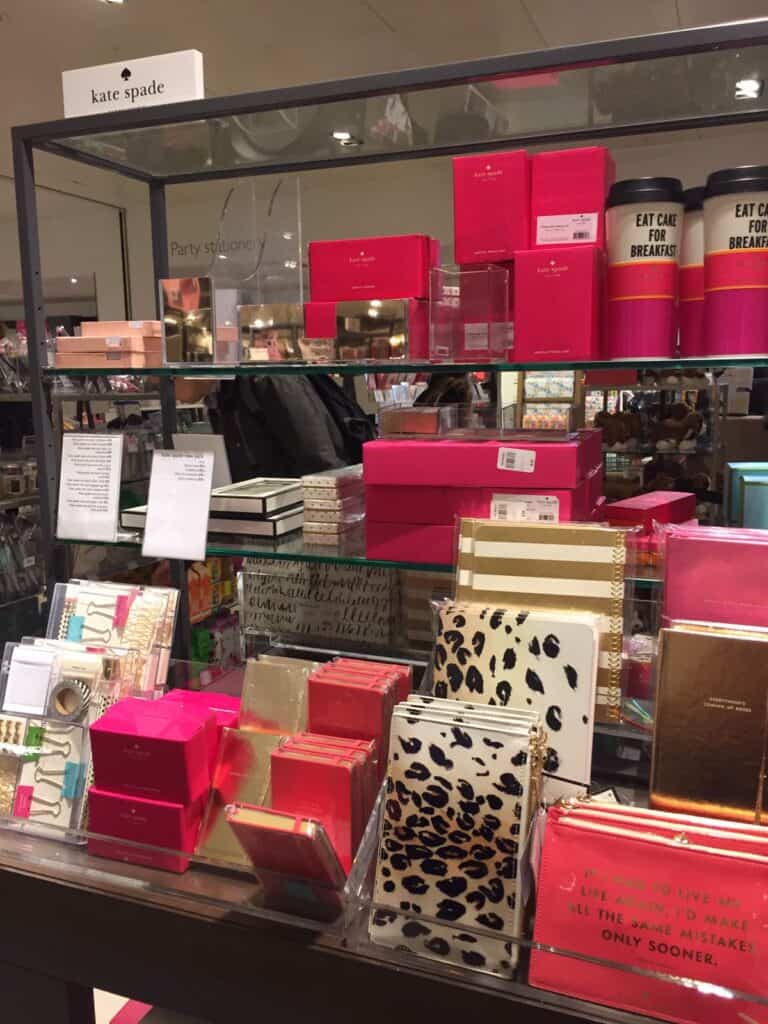 Going to Selfridges for this stationery trail was the first time I had visited the store. I’m not sure what I expected exactly but I think all i could say was ‘more’. The stationery products sold are similar to those in Liberty and Fortnum and Mason. There are mostly upmarket brand which are fairly expensive, for example around £20.00 for a letter set, if not more. There is also a good selection of Moleskine products and plenty of MT washi tape. For your basic stationery products I would say that this store could be skipped. However, in the stationary section is a WHSmiths store that has a great selection of magazines which is worth having a look at. I bought Flow magazine, I couldn’t stop myself. I was also very tempted by the chocolate department that you have to walk through to get to the stationery… it’s difficult to walk past so many macaron without trying one or two! 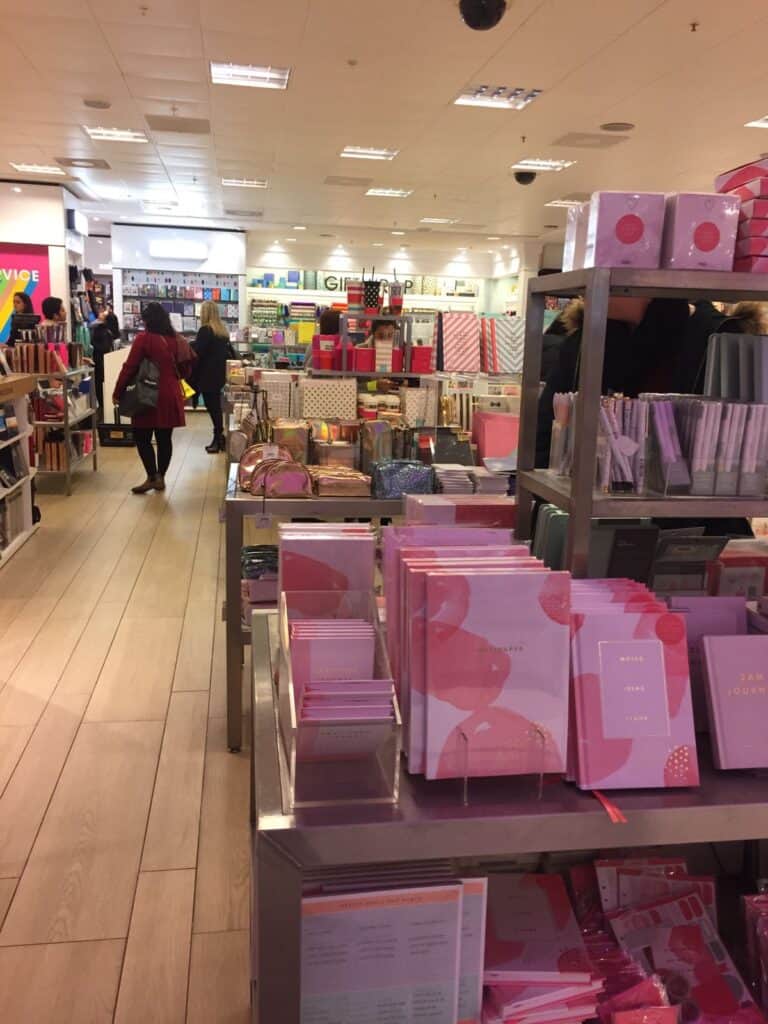 I don’t think that I would have come across this shop at all if not for the tour, it’s on New Bond Street on which are plenty of high end designer shops. If you want to shop at Gucci or Chanel (or just look in the windows) then this street is for you. Smythson is not immediately obvious as a stationery shop, the window display featured a lot of leather products like bags, wallets and passport holders. Going in the store it is clear that these are the main things it sells but there is also a variety of high end stationery products, such as notebooks and luxury office items. I don’t frequently go into expensive shops in London since I know I won’t have the money to spend there, but it can be nice to browse. However, in the case of Smythson I have never felt so uncomfortable in a shop as I did on this visit. My boyfriend and I were followed around the shop by a shop assistant like we would fill our sleeves with notebooks the moment her back was turned. You could argue that she was just being helpful, but as there were various assistants standing ready to help in every room i would guess not. Luckily this shop’s products weren’t my kind of thing, I don’t have £45.00 to spare on a tiny pocket sized notebook, and even if I did I would chose a material other than leather or alligator skin for the cover. Needless to say I will not be returning here. 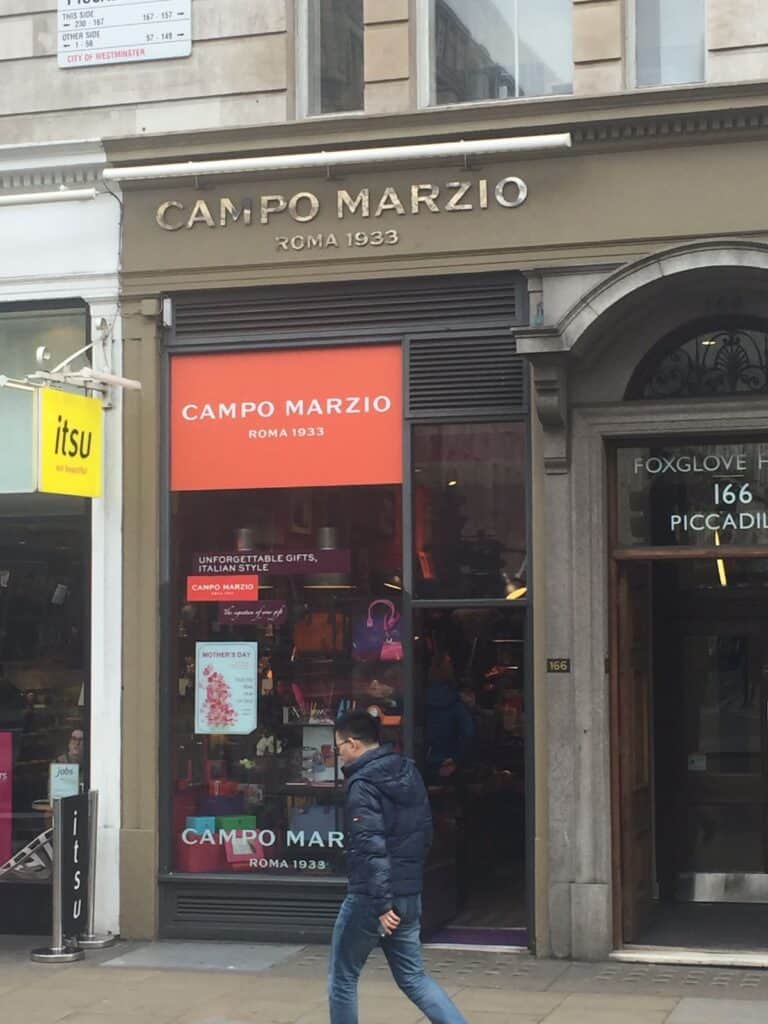 Campo Marzio is a tiny little shop at the bottom of New Bond street, selling Italian notebooks, pens and leather goods. I’ve taken my boyfriend on this stationery tour and in Campo Marzio I think we actually found a stationery shop that he liked more than I did. The leather products will never be my type of thing since I don’t like leather, but i will admit that they look nice. The range comes in a variety of bright fun colours and there are plenty of items from large handbags, to card wallets and USB keyrings. They also do a range of small notebooks which are really fun and quite cheap. My boyfriend loved the fountain pens which come in all sorts of colours and designs. The shop also sells plenty of inks, some pen and ink sets, and sealing wax and stamps. As for the leather goods, they’re not vastly different from those in Smythson. The main difference is the price, and the lovely customer service we had in Campo Marzio. My advice would be to walk down the street and shop here instead of Smythson.

As much as I love Fortnum & Mason I wouldn’t say it was for its stationery department. The stationery is upstairs, so to get to it you need to walk through the food department where I could have stayed. If, like me, you’re a fan of speciality tea and biscuits you’ll also be distracted here! There’s no harm in that though. I think that one of the nice things about this stationery trail is that you come across much more than stationery. I mean yes, that is the main focus, but stores like this are great in that you can find so much more. It is well worth taking a bit of time to look at the food and drink on offer. For example, I found stationery themed sugar cookies when I visited.

A lot of the stationery here I also saw in Liberty and Harrods since it stocks stationery by upmarket brands. However, you can buy a few things that are a bit different too. There was a lovely table of quills and inks, and also wax seals which I love! There’s just something about a pen made out of a feather that I love the look of, and I haven’t seen these sorts of tools in many other places. There were also a series of notebooks made from classic book covers which were so nice, I couldn’t justify buying them for myself but they would make a great gift.

Which of these stops would you love to visit and buy a little (or a lot) from?!

Make sure to come back in a few weeks for the third and final part of the mini series.