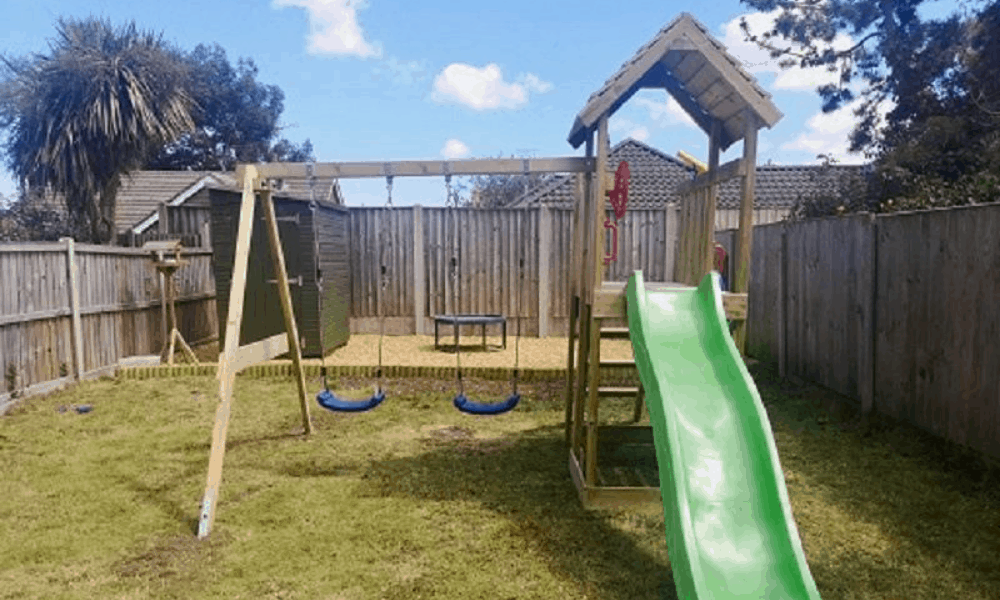 Our back garden has always been somewhere that we spend a lot of time, especially since Erin was born. Sometimes it can be hard to get out and go somewhere but we also don’t want to be stuck indoors. Now that Erin is 4, getting on for 5, we have been planning to make the back garden more child friendly and fun. Although we have had smaller things for Erin to play with, nothing was enough to make her want to stay outside for any real length of time.

What we really needed was a decent piece of play equipment, something that could rival a trip to the park. We were very luckily sent the Wickey MultiFlyer Deluxe and I cannot tell you how excited Erin was when we told her about it. Every day she would ask if it was here yet and was it ready to play on. 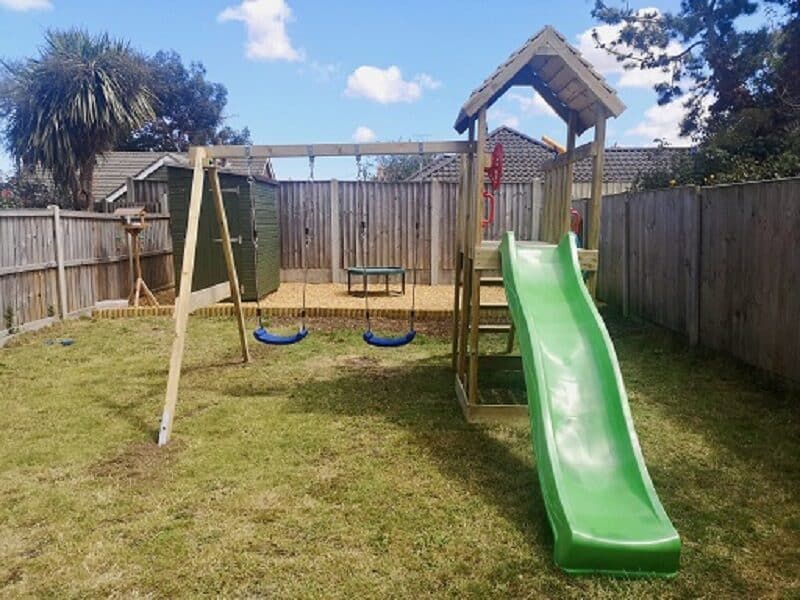 After our order was shipped (it comes from Germany) it took around a week to arrive. Along the way, we were kept up to date with emails and we also had a phone call from the courier to arrange a suitable day for delivery. We were able to say yes to the first day they offered as we’re all home at the minute anyway but this made delivery really easy for us. The set was delivered on a pallet and John did have to help the man to get it off the van which wasn’t really ideal. I’m not sure what would have happened had I been home alone to take the delivery. Regardless, the delivery was very straightforward for us.

It’s advised that you unwrap all of the pieces immediately after delivery and let them air out for a couple of days before you put the set together. You should also check all of the pieces for any damage as soon as you’ve had delivery. This way, if anything is wrong you can get in touch with Wickey and they can get any replacements sent out as soon as possible. All of our pieces were fine apart from one piece of wood with a slight crack in it. This wasn’t bad enough to ask for a replacement though as it wasn’t going to affect it’s use at all due to where it was going to go.

I’ll be completely honest here, the thought of putting the Wickey MultiFlyer Deluxe terrified me. John and I are not very good with DIY and we don’t have very good tools. We would have had to buy new tools for sure to be able to get this together so instead, we contacted a local business who do things like this on a regular basis and we paid them to put it together for us. The 2 men arrived at 7am on a Saturday morning and they were done by 1pm. You are advised to concrete the set into the ground for safety and we were sent 10 ground anchors to help with this (these are normally purchased separately). Unfortunately, due to our ground being awful to dig in, we were only able to use a few of them but the men made sure everything was really safe and stable. If you do use Wickey’s ground anchors you get a 10 year guarantee on the wood used so it’s really beneficial to use them.

After hours and hours of Erin asking if her wooden swing and slide set was ready, she was finally able to play after the concrete had set. First up was the swings, which are easily adjustable if you need them either higher or lower, depending on the age and height of your child. It took us a few minutes to get this right for Erin but after that she was off! She loves to be pushed on a swing so this is definitely a favourite part for her. 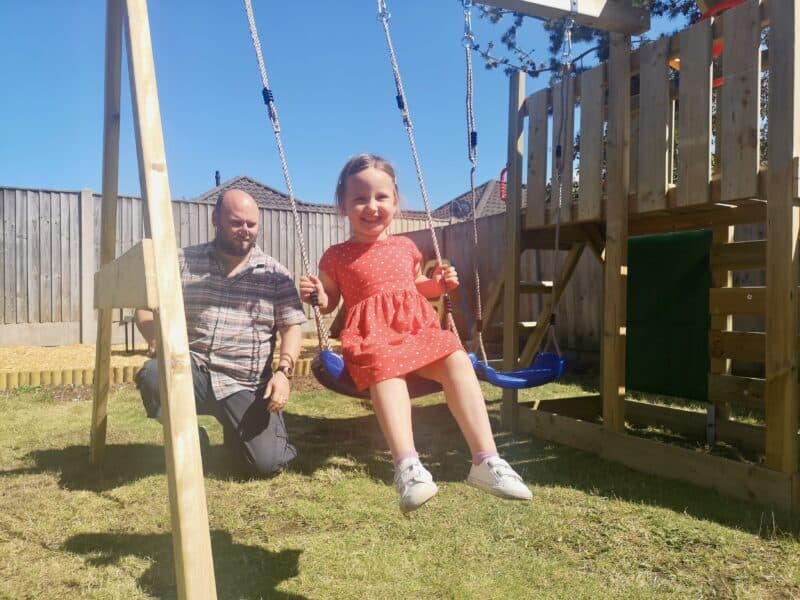 Erin absolutely loves climbing frames and this part of the set is so much fun. The ladder at the back is really sold and stable, helped with added safety handles at the top. The steps are a great height for Erin right now but there’s also plenty of space for her to grow and to be able to use this for years to come. 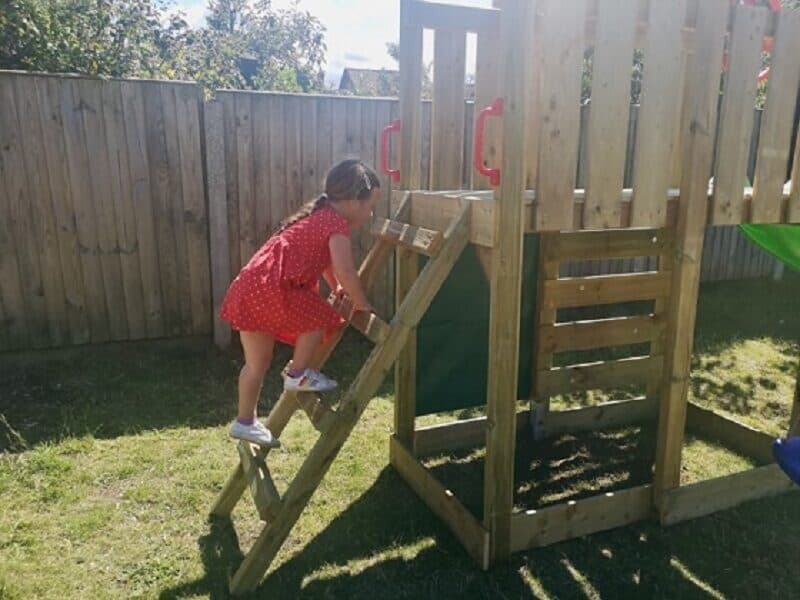 Something Erin was particularly excited about was having a huge slide in the garden and this didn’t disappoint. The slide also has a safety handle to one side so that Erin can steady herself before zooming down! The slide is quite fast (but not too much) and it’s a lot of fun to whiz to the bottom and then do it all over again. 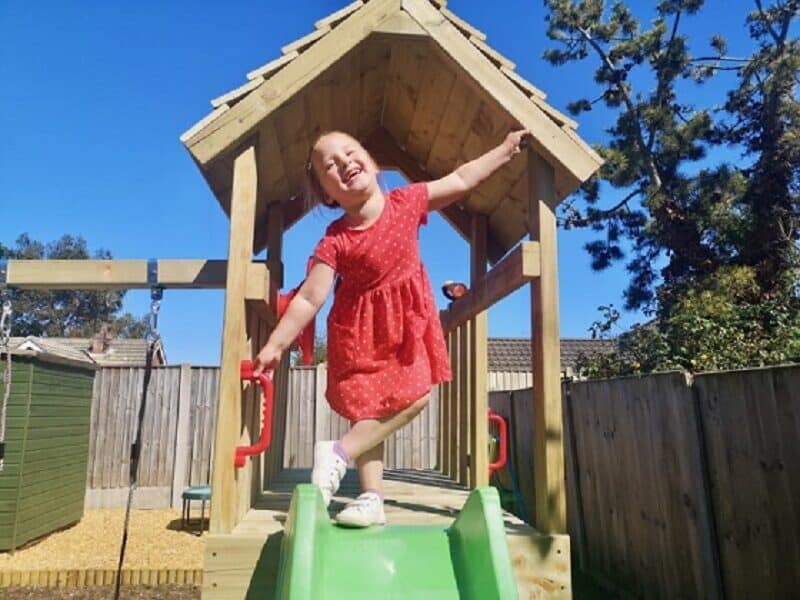 If all of that wasn’t enough, the Wickey MultiFlyer Deluxe has some cool extras too. The climbing wall to the side is something Erin is still getting used to as it’s not something she’s used a lot before now. There are accessories such as a telescope and steering wheel to help enhance play and encourage imagination. Underneath the climbing frame part there is also space to create a sandpit if you want to although Erin is happy using hers as somewhere to play hide and seek at the minute. 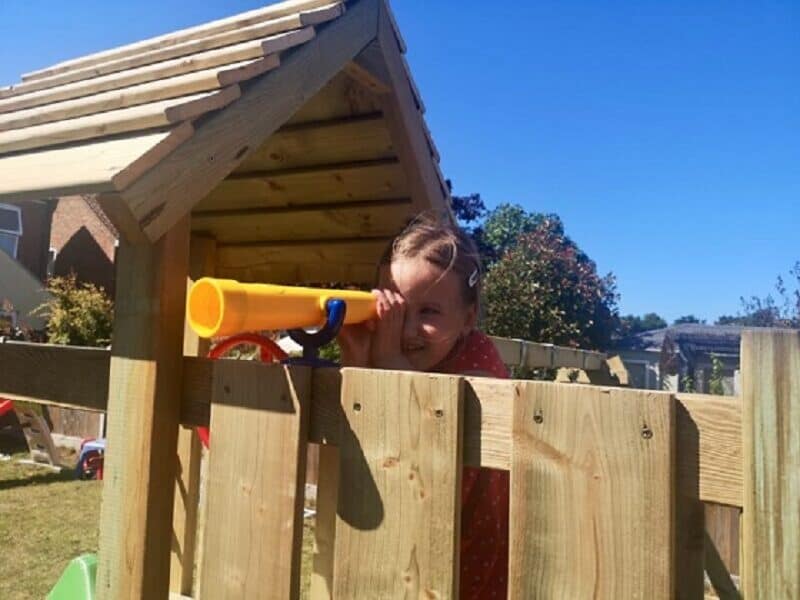 The Wickey MultiFlyer DeLuxe Climbing Frame is such a fantastic addition to our garden and it’s something Erin is going to be able to use for quite a few years. It’s the first thing Erin wants to go on as soon as we go outside into the garden to play and she can do so for hours. Before, Erin would get bored in the garden after an hour or so but now we’re able to spend a lot more time in the garden. 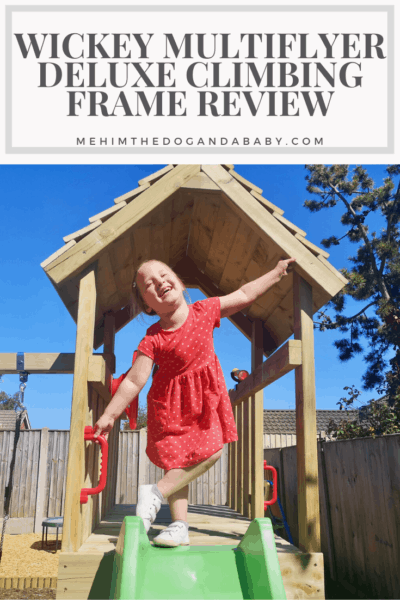