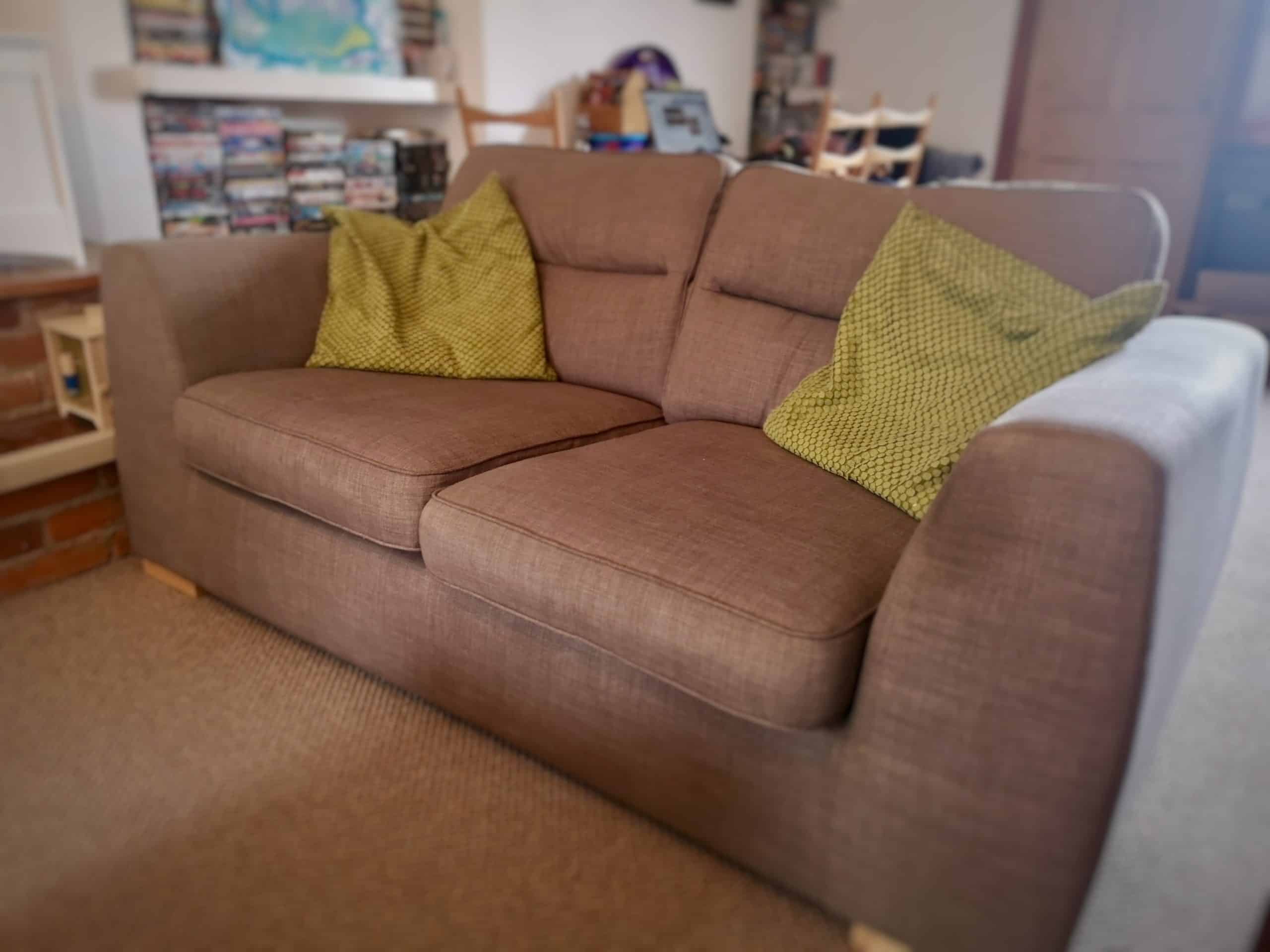 In the town where I live there are plenty of charity shops. I can think of at least 7 within a couple of minutes of each other. In a city that might not seem like a lot but I live in a small town so a large percentage of ‘town’ is charity shops. I have a couple of favourites and I’ve written before about some of the bargains I have picked up.

This year I am on a bit of a mission to get some things done around the house. It’s not all about DIY but making some of the rooms a bit cosier, a bit more sociable and a bit nicer to spend time in. I’ve started with the living room as it’s the biggest room in the house, thanks to the dining room and play area attached to it. As soon as our new carpet was laid in January I felt completely different about the room I once hated so much. Earlier this month we also added a beautiful coffee table, which has also made a big difference.

The one thing, apart from the walls, that I hated the most was the couches. We have an old brown leather 3 seater and chair which we brought with us when we moved in. That set is at least 7 years old but the people who lived in our flat before us had it first and we don’t know how long for. We also had a 2 seater green sofa bed which is actually something we got for our dog when we had him. It was free from Facebook marketplace and although it was ugly, it did us well for quite a few years. 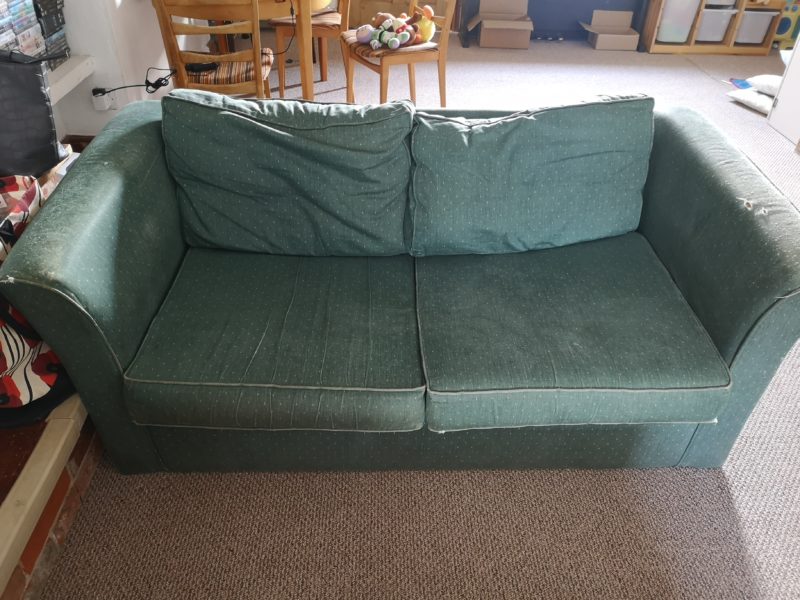 We can’t afford to buy a new suite right now and it would be a long time until we could so that wasn’t ever going to be an option. The brown leather pieces are actually in okay condition (if you ignore the bits the dog chewed) and we can cope with those for a good few more years. It’s always been the green sofa that I’ve wanted to get rid of. It was uncomfortable and just looked awful.

Last week Mum and I were walking past my favourite charity shop. They sell a lot of furniture and I’ve had a triple wardrobe from them before, as well as a toy chest and other bits and pieces. As we walked past we noticed a sofa we’d seen maybe a month or two ago. At the time, I wasn’t overly impressed by it so I think it was more expensive then. However, this time I asked for a price and was told £15. Yes, £15 for a sofa. 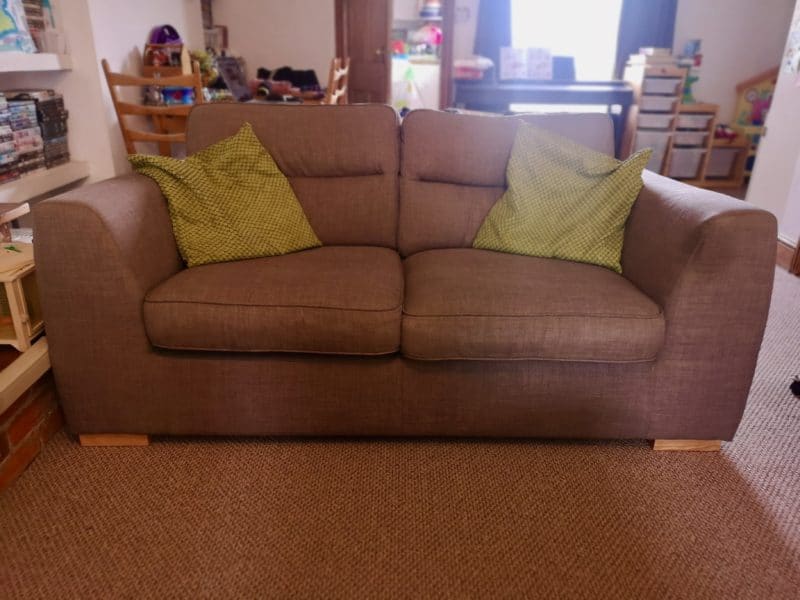 Being a sort of grey/ brown meant that the colour fit in really well with our room and although it had a few marks on it, it wasn’t anywhere as awful as the green couch. It hadn’t been reserved so I snapped it up there and then. Luckily, the charity shop delivers and for another £8 I had this done the next evening. For £23 I had a new 2 seater sofa and had it delivered! I couldn’t quite believe it. 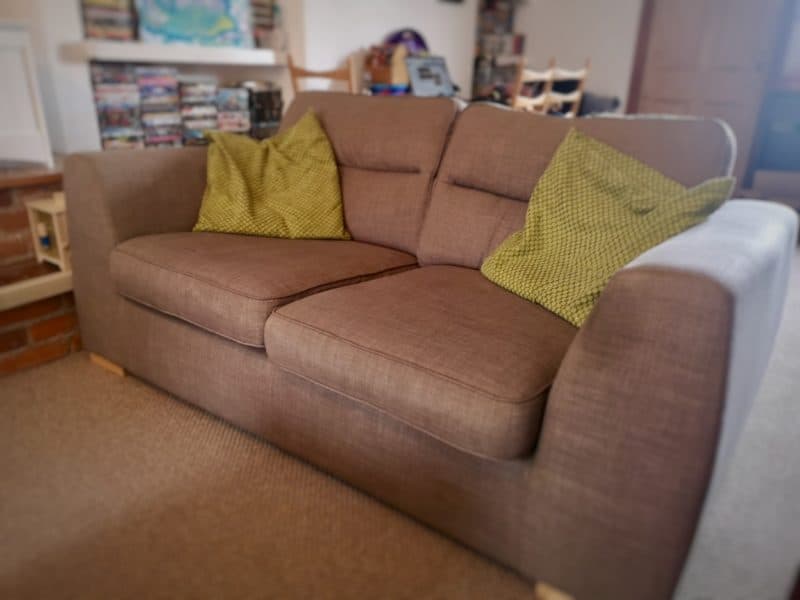 Unfortunately, I didn’t actually measure the new sofa and when it arrived I realised it was bigger than the old one. Oops! It wasn’t such a big deal though as I had room to push it back a little bit to fit it in. We just don’t have a lot of room coming in and out of the living room to the dining room but I can deal with that. 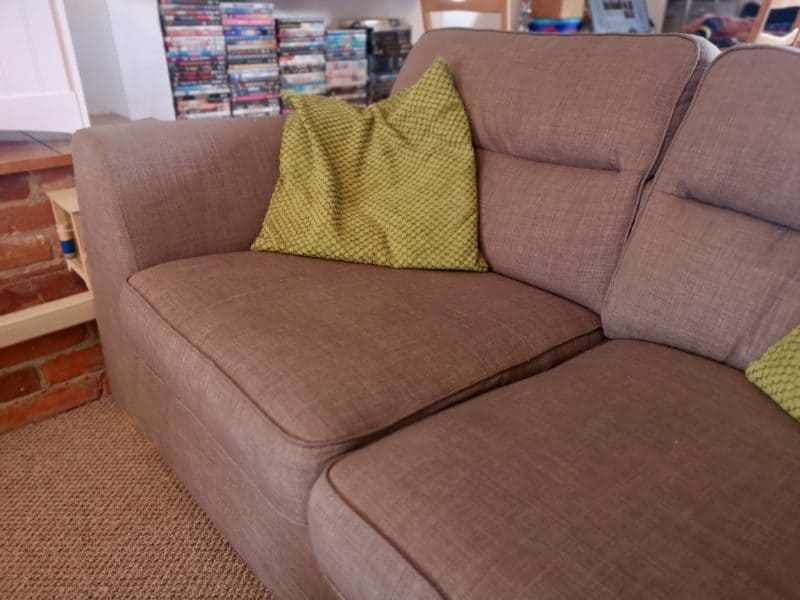 The new sofa is so comfortable and it looks so much better. My room doesn’t look so mis-matched and grubby any more. It looks clean, more modern and a lot cosier than it did before. Now that I have a vision for the living room, and know what colours I want, I want to get some new cushions for all of the sofas to make them all match. Next up is to find a nice dining table at a good price! 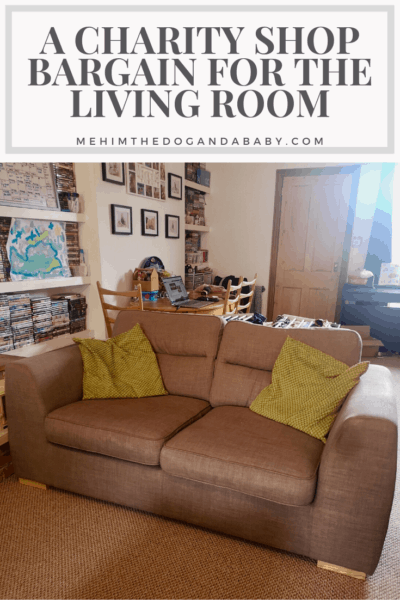 6 thoughts on “A Charity Shop Bargain For The Living Room”