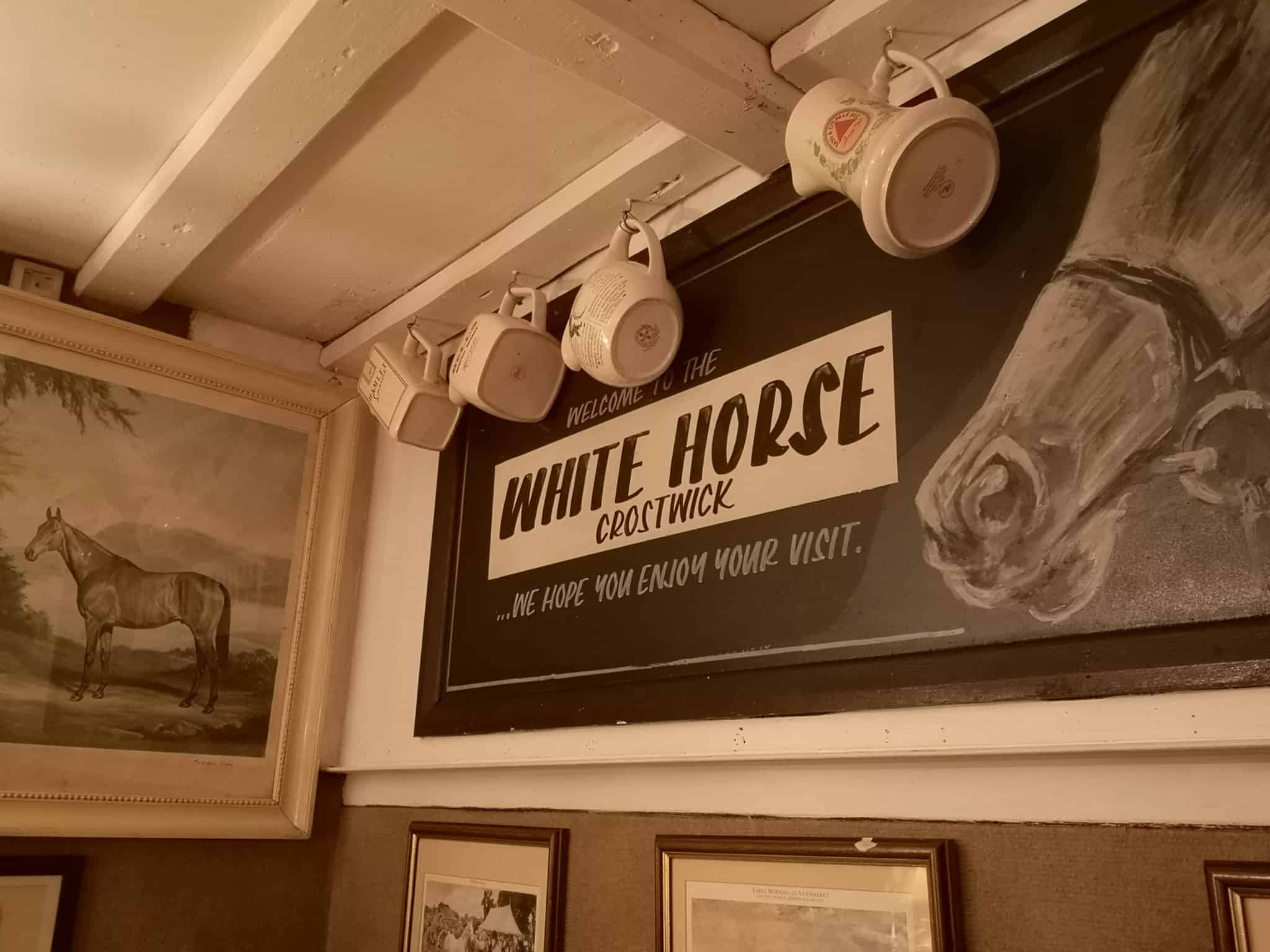 When Erin was born my family either lived in London or Grimsby (where I’m originally from). We did have John’s family quite close by but unfortunately circumstances have meant that we don’t speak to some of them now and others we have only recently mended our relationship with. This has meant that since Erin was born John and I have managed to have 1 meal out together in 4 years. I know a lot of you will think that’s absolutely crazy but that’s just how it has been.

You may have read a while back that my sister was living with us while she and her now husband planned their move here. Well, they moved out in the summer of 2017 and have lived in Norfolk since then. Then, just before Christmas my Mum moved in with us and she’s since encouraged us to make the most of it and do things we might not have done before.

Something John and I haven’t been able to do in a long time is to go out with friends. We have had time out separately but never together as one of us had to stay at home with Erin. So, when some of our friends asked us if we wanted to go out for dinner last Friday night we jumped at the chance. 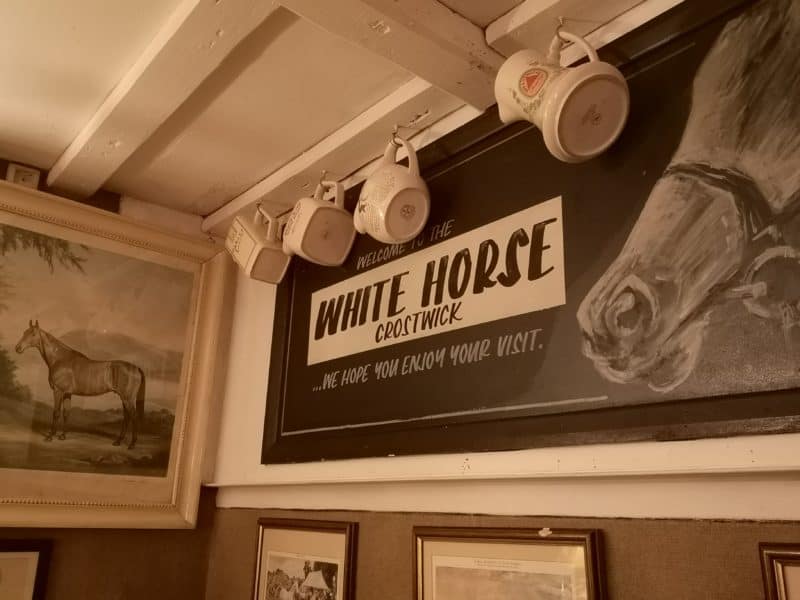 We chose a pub in Norfolk that was about a 15 minute drive away from where we live, on the route to Norwich. As we don’t drive it’s nice to go somewhere with friends who do as we might not ever discover them otherwise. Our choice was The White Horse in Crostwick. We arrived at just past 6pm and there was already quite a few people there. Luckily, we’d booked a table in advance. I think we would have struggled to get one otherwise. 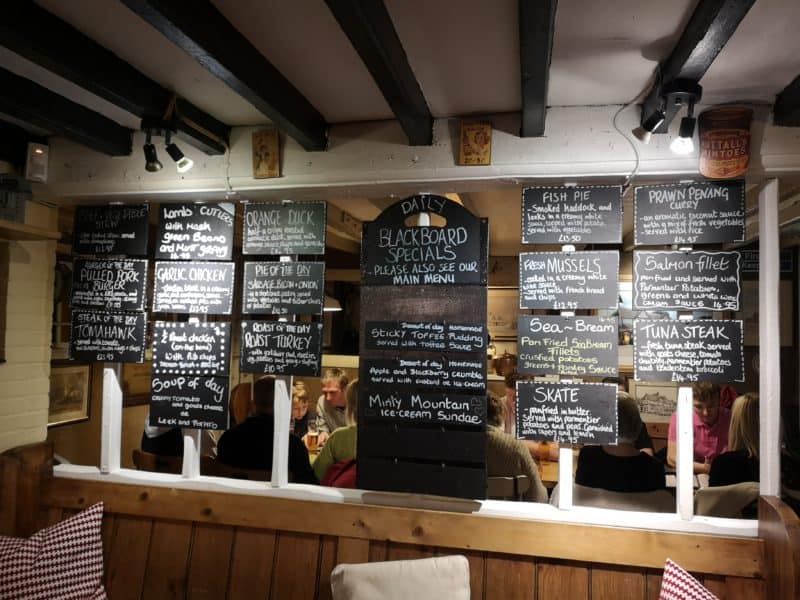 I’d been able to look at the menu online before our visit but when we arrived it was a really lovely surprise to see a massive specials board as well. There was a total of 14 specials, 7 of which were fish, but it was a shame to see that there wasn’t any vegetarian options here. However, this didn’t affect us at all and we were all spoiled for choice, even the fussiest of people like myself.

In the end, we ordered a mix of items from the main menu and from the specials board. It did take us a while to decide though as there was so much that we all wanted to try. Something to mention here as well is the prices. I was really happy with the cost of everything and mains ranged from around £11.50 but going up to £24 for steak. I think the average price for a main meal was roughly £12.95 to £14.95.

In the end, I opted for gammon which came with an egg, mushroom, tomato, salad and chunky ‘pub’ chips while John went for the prawn Penang curry. John always likes to have something that he wouldn’t usually have at home whereas I go for what I know I like. There’s nothing worse than trying something new and hating it, especially when you’re paying for it! Our friends went for the tuna steak and a cheese and bacon burger!

When our food arrived we were all surprised by the portion size and just how good the food looked. Eating in a country pub you sometimes think it will be cheap, frozen food heated up but that’s definitely not what we got. Our meals looked delicious and there portions were really generous. My gammon especially was huge and it came with lots of extras.

Even though we all had quite large meals we decided dessert would be a good idea. As John and I don’t get out very often at all I wanted to make the most of eating in peace and without Erin stealing anything I had. I’d had my eye on the waffles since seeing them on the online menu so that was an easy choice for me. John decided on the apple and blackberry crumble with custard while one of our friends had a chocolate brownie.

Once again, my food seemed to have the largest portion and it also looked the best I think. The waffles were warm, soft inside with crisp edges and they went really well with the ice cream and cream. As there was so much food I really quite struggled to finish my dessert. Even though it took me a while I did manage it and I was glad that I did.

Not only was the food at The White Horse delicious but the atmosphere was lovely too. The tables were quite close together as it’s a small country pub but there was candles on the table and just a really nice place to spend the evening. We didn’t have to wait long for our food at all and the service was great. Something I hate when dining out is dirty plates being left on the table but ours were cleared very quickly which I was impressed with.

Going out, getting slightly dressed up on a Friday night and spending some time with friends was just want John and I needed. Having Mum here to give us a helping hand makes such a difference and I feel like we can start to have a bit more of a normal life again. Of course, we won’t be asking Mum to babysit all the time but a night out once every 2 months or so would be ideal! 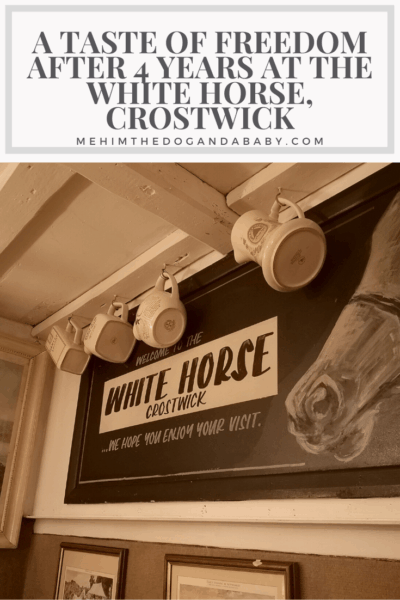 11 thoughts on “A Taste Of Freedom After 4 Years At The White Horse, Crostwick”