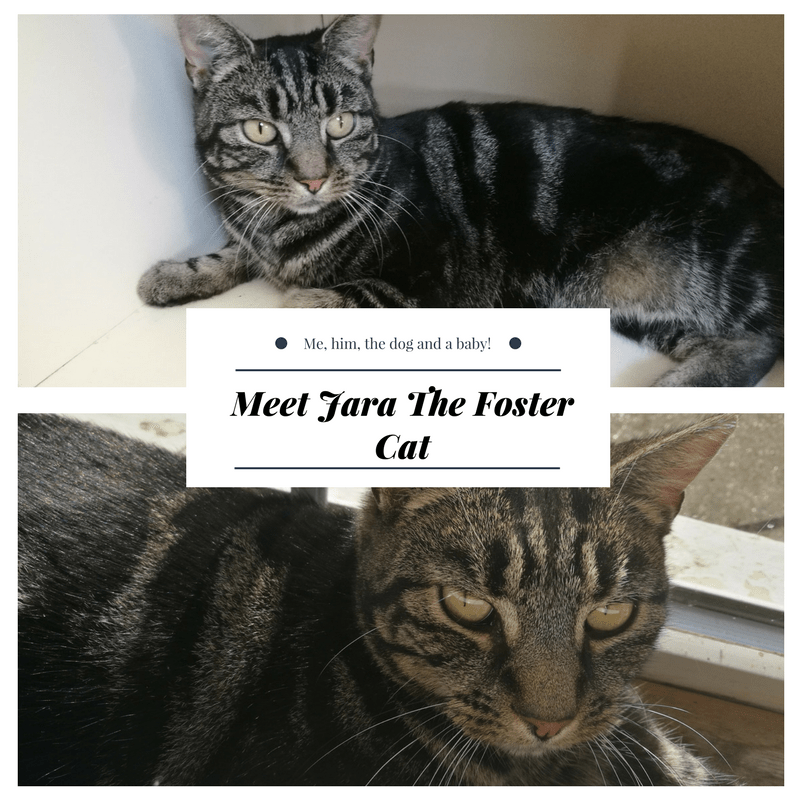 You may have seen on our Instagram account recently a few pictures about a cat. Well, we have recently become foster cat owners.

My sister Natalie and her fiance Chris live in London and a cat kind of adopted them as owners a little while ago. Unfortunately, they don’t live somewhere that allows pets so they can’t give her a home right now. Natalie has tried to get so many animal shelters and RSPCA branches to take her in but no one would. It wouldn’t have been a problem really but with Natalie and Chris going away for a while, they worried about her going missing again or something happening to her. They didn’t want her to become a stray again and be left unfed.

This is where we come in. I couldn’t leave an animal to have this happen to it so we offered to look after the cat, whose name is now Jara! Nat and Chris are moving to Norfolk, hopefully this year, so when we offered, we knew it was a short term solution. 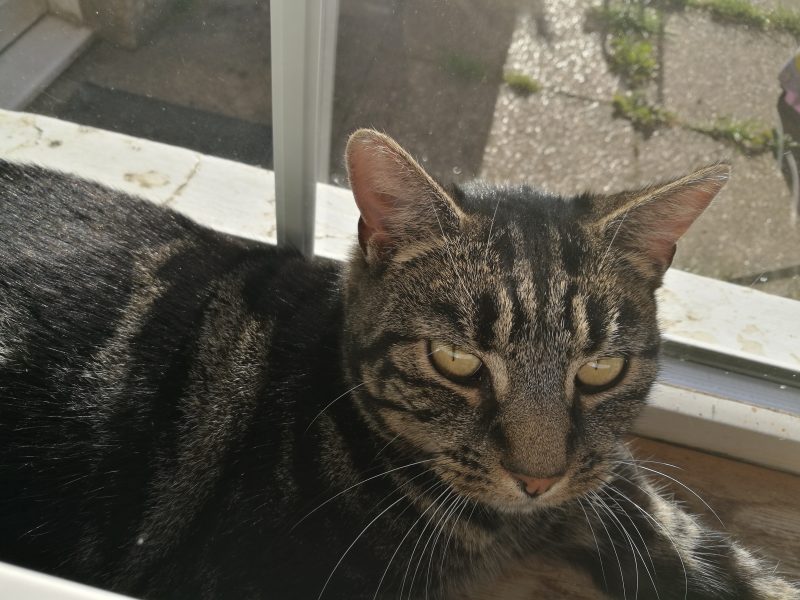 You may have noticed the lack of posts about Jackson recently. Unfortunately, we had to have Jackson re-homed a little while ago. I haven’t written about it because it’s too hard and too upsetting for me still. We won’t be changing the name of the blog, because Jackson was such a big part of this family and I still actually think our name represents what we talk about here!

Anyway, back to Jara. Having a cat, who is quite young, and a toddler is interesting to say the least. Jara can’t be more than 18months to 2 years old so she’s still very playful. She has also been a stray and then homed in pretty much one room. She’s still very much getting used to having a lot of space, even though she isn’t allowed upstairs or outside yet. Jara has already tried to climb the curtains and successfully got near to the top of a bookcase! 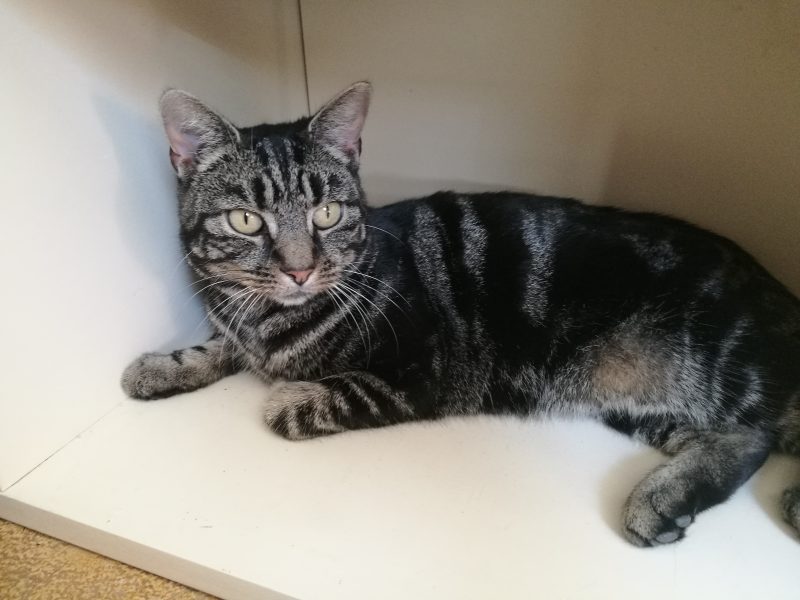 Jara has very quickly made herself at home. She loves to sit on the windowsill near my desk and look outside, or out of the front window as well. She loves any spot that is sunny and sunbathing in the middle of the floor is a favourite so far! 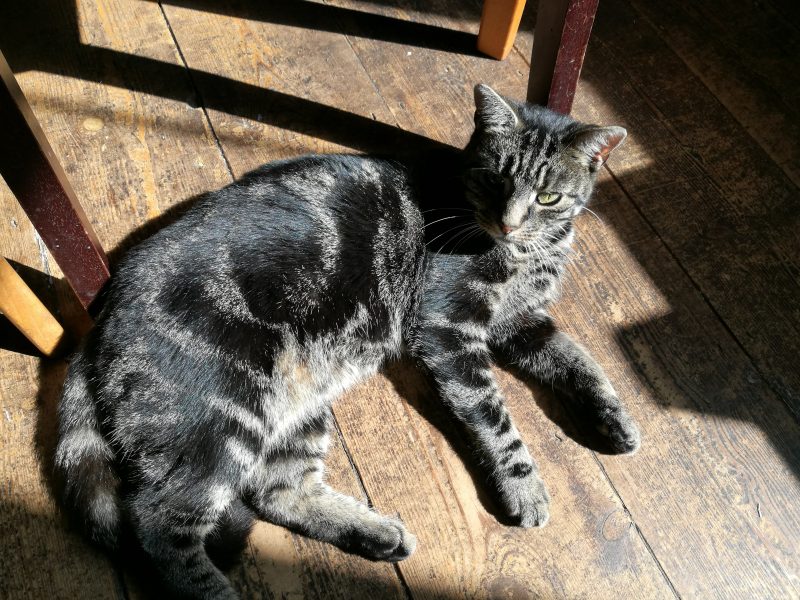 Erin LOVES Jara. Most mornings she still says WOW when she sees her. I’m not sure when that will stop! Erin unfortunately loves trying to stroke Jara which ends up in a bit of a chase around the room. However, Erin is actually really gentle with her when she does get to stroke her. She does that cute tutting kind of sound to try to call her and picked up saying Jara very easily. She also meows at Jara a lot and it’s so funny to watch because Jara does it back! 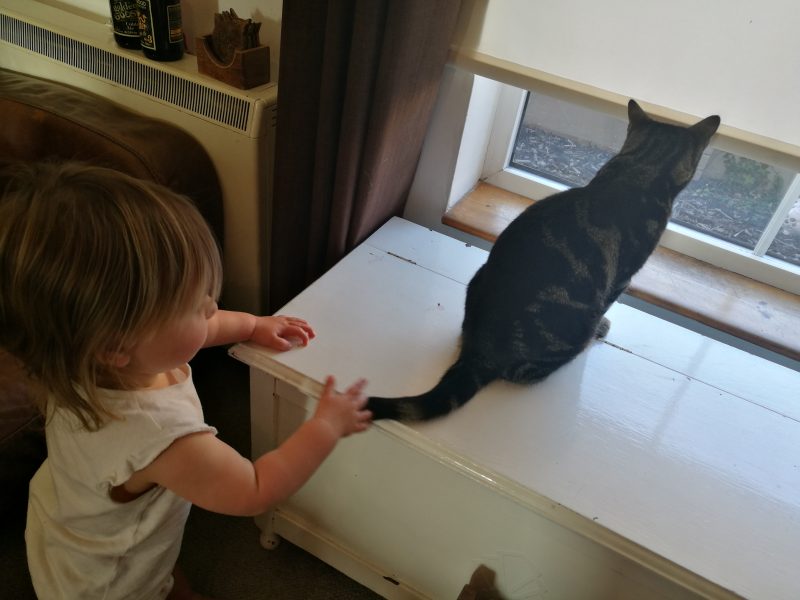 After having a couple of months of calm (as much as you can with a toddler) we’re now back to being a house of madness. Jara is so easygoing though and I’m glad we could give her a proper home until my sister has her back!

Do you have any tips for dealing with toddlers and cats?! 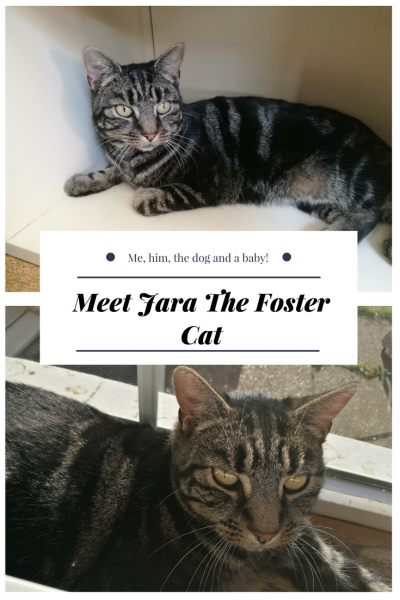