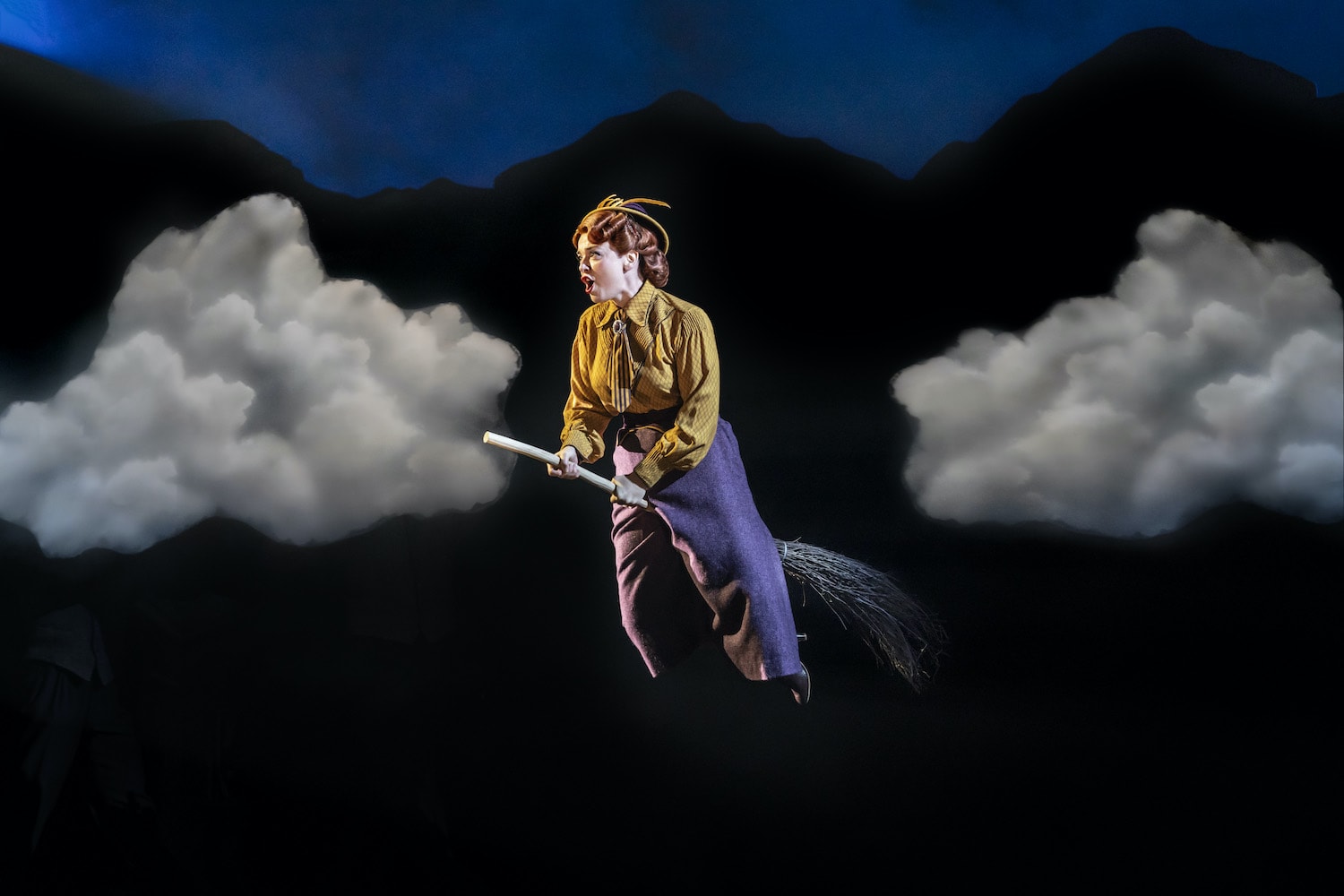 One of the things that I was really sad about when Covid hit us all back in Mach 2020 was that so many things had to close. Theatres and live shows were one of the worst areas hit and it’s taken such a long time for them to be able to reopen again and for performers to get back on the stage.

I’m so happy to announce that Bedknobs and Broomsticks will be showing at Norwich Theatre Royal from 28th September to 3rd October and I cannot wait to go and see it. You can out more about the show, as well as thoughts from some of the cast below.

Aren’t we due a bit of magic in our lives? Dianne Pilkington thinks so. She is staring in Bedknobs and Broomsticks, and she, for one, is thrilled to be dreaming of the impossible again.

“It’s my first theatre job back,” says the Wigan-born actor who plays Miss Eglantine Price, the trainee witch. “It is fun, it is full of magic and it takes you on a different journey from the adventure we’ve been on for the last year and a half. It is what the world needs right now.”

The show, which opens at the Norwich Theatre Royal on 28th September, is the first ever stage adaptation of the 1971 Disney favourite. Pilkington says the production is every bit as ground-breaking as the movie, with its famous blend of live action, animation and musical numbers.

“The film was doing something new and innovative, and so are we,” says the West End star, whose roles include Glinda in Wicked, Donna in Mamma Mia! and Elizabeth in Young Frankenstein. “It is faithful to what people love about Bedknobs and Broomsticks but this creative team never make the obvious choice. They have an amazing creative brain.”

Set in the darkest days of the second world war, Bedknobs and Broomsticks is about the three Rawlins children who have been evacuated from London. Finding themselves in the fictional Dorset town of Pepperinge Eye, they are put in the care of the eccentric Miss Price who is less interested in looking after them than in completing her studies in magic.

Before they know it, she is casting spells on their bed and sending them skywards on a magical adventure.

“She’s very quirky,” laughs Pilkington. “She’s a woman who has lived on her own for a long time and has not had much love for a really long time. We’ve been exploring the scary side but there has to be a joy in her too. There’s a real relish in being an apprentice witch.”

Long before she got the part, Pilkington was an admirer of Angela Lansbury who immortalised the role of Eglantine Price on film. She’d even got the merchandise. “One of the first masks I bought at the beginning of the pandemic was Angela Lansbury in Murder She Wrote,” she says. “The rest of the cast think it’s hilarious but I didn’t buy it for this – it’s just mine!”

She is, though, determined to make the part her own: “I’m a huge fan of hers but I’m not like her at all. Also we’re in a different time. I’ve tried to come it at it from a modern point of view, even though it’s still set in wartime.”

When she wants to check she’s on the right lines, Pilkington has the perfect audience on hand. Her sounding board is her eight-year-old son. “I’ve been practising on Hugo,” she says. “I’ve shown him my magic tricks and he doesn’t know how they’re done, which is gratifying.”

She adds: “He’s convinced the broom is on rocket boosters and he could be right – who will ever know?”

As well as the original score, the show features Sherman brothers songs that were dropped from the film, plus new material by Neil Bartram who has worked closely with Brian Hill on the stage adaptation. With the additional songs, it has become a full-blown musical. “Substitutiary Locomotion is one of the best numbers I’ve ever sung,” says Pilkington. “I get so excited, I actually do believe I’m magic and casting a spell. When you’re in the middle of that on stage it’s fabulous.”

Bringing her up to speed on the art of magic is co-director Jamie Harrison. He is the man who created the stage illusions in Harry Potter and the Cursed Child and once had to perform a magic trick for JK Rowling herself.

He has also worked on Charlie on the Chocolate Factory in the West End and Pinocchio at the National Theatre, as well as all the shows for Vox Motus, the Glasgow company he runs with the other co-director, Candice Edmunds.

“At the core of Harry Potter is the human being,” says Harrison. “What I learnt was that magic really works if it’s part of the personality of the character who is performing it. That’s something we’re working with in Bedknobs and Broomsticks. We wanted it to feel charming with a sense of childhood imagination, but at the same time be allowed to take flight.”

Candice Edmunds says the fantasy emerges from the stress of the poor children who were evacuated during the war. “Using fantasy to bring respite from trauma is really timely,” she says. “It feels more than ever we want something to lift us out of our situation. The children are in the depths of a traumatic upheaval and fantasy helps to offer relief from all the dark forces closing in around them. It’s very cleverly written to show the way a small child would imagine solutions to problems.”

Edmunds, who grew up in Australia and South Africa before moving to Glasgow, can’t believe she has the chance to direct a show that played a formative role in her childhood. “When I was about eight, we spent some time in a small town called Maun in Botswana where my aunt lives,” she says. “There wasn’t much to do there except raid her VHS collection. Pretty much the only kids’ film she had was Bedknobs and Broomsticks. My sister and I watched it over and over again. It has a really special place in my heart.”

In making the switch to the stage, Bedknobs and Broomsticks has become what Harrison calls “an emotionally powerful journey about belonging, commitment and family”. It is a shift in emphasis that made Pilkington more determined than ever to get the part. “When I first read the script, I bawled my eyes out for the last ten minutes to the point when my husband was quite worried,” she says. “What they’ve done with the story is incredibly moving.”