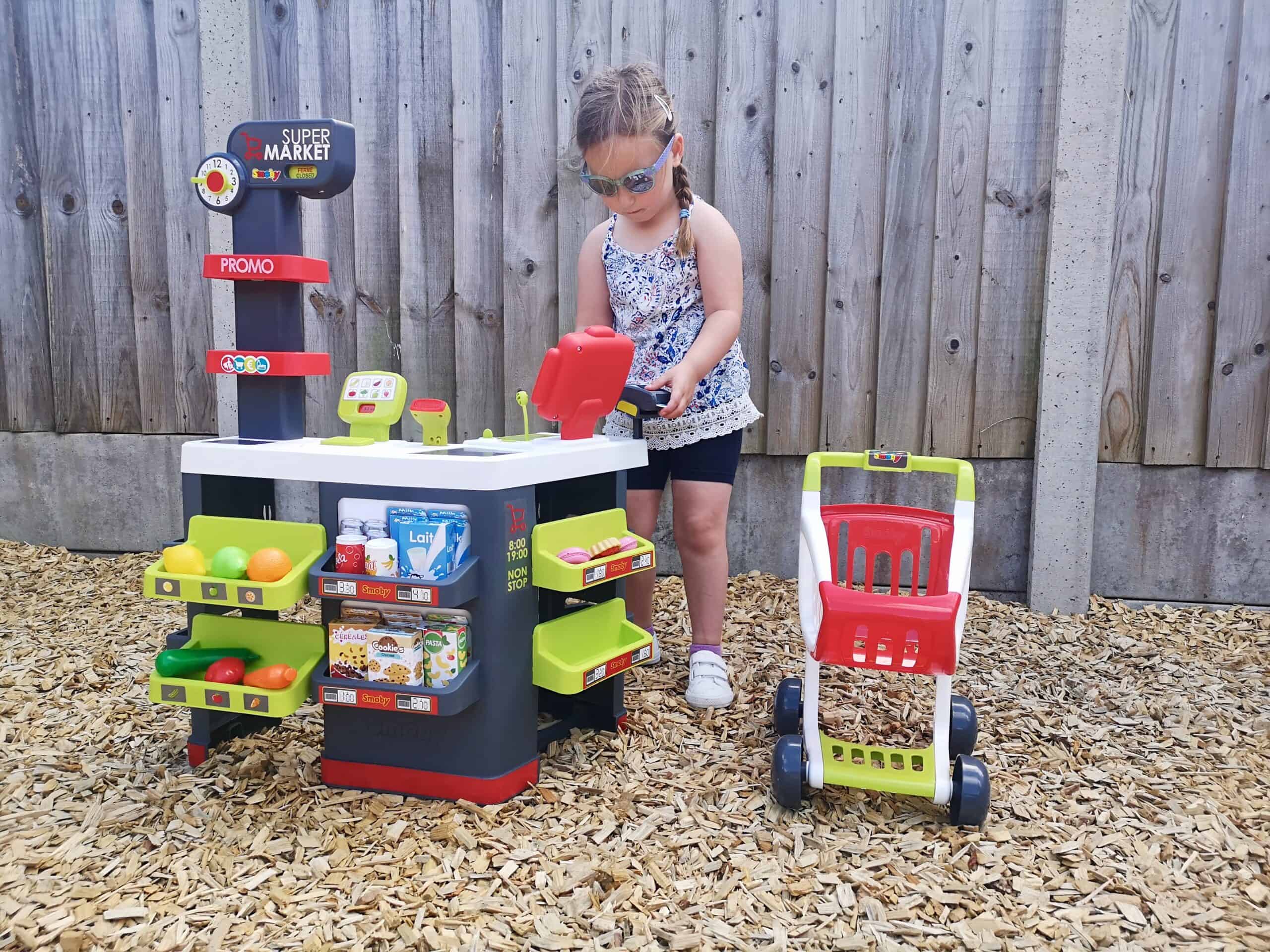 We were lucky that Erin got to go back to nursery for around 6 weeks and it honestly did her the world of good. Now though we’re coming up to the summer holidays and as we’re still not going for as many days out we have to make the most of our time at home. I’ve realised that it’s worth investing in your outdoor area, should you have one, because it can be turned into such a fun and exciting place for children.

When it comes to garden toys a staple piece is a slide. It’s something a lot of children go straight for at the park and it’s something that can provide hours of fun. With Erin being nearly 5 I thought that there might not be a slide big enough for her and one that would last her for at least a few more years. The Smoby Funny Slide is great for children over 2 but it’s also one for older children as well. 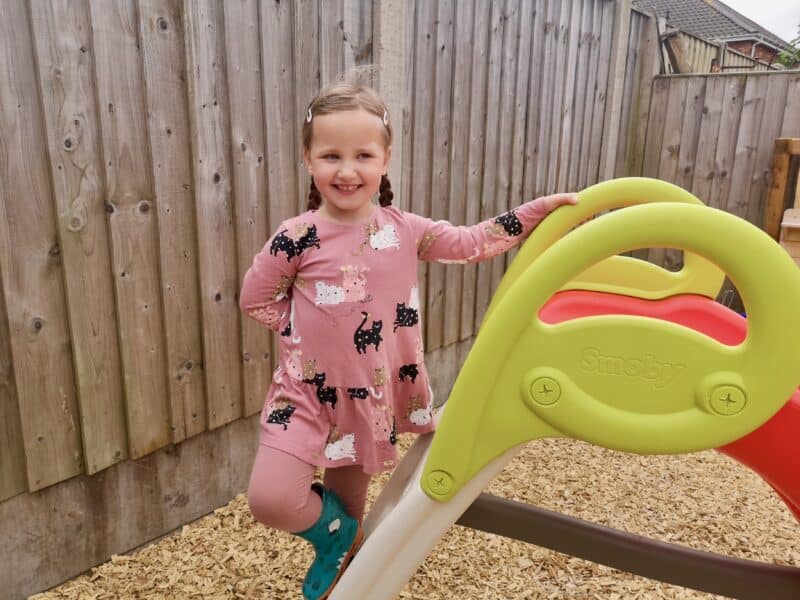 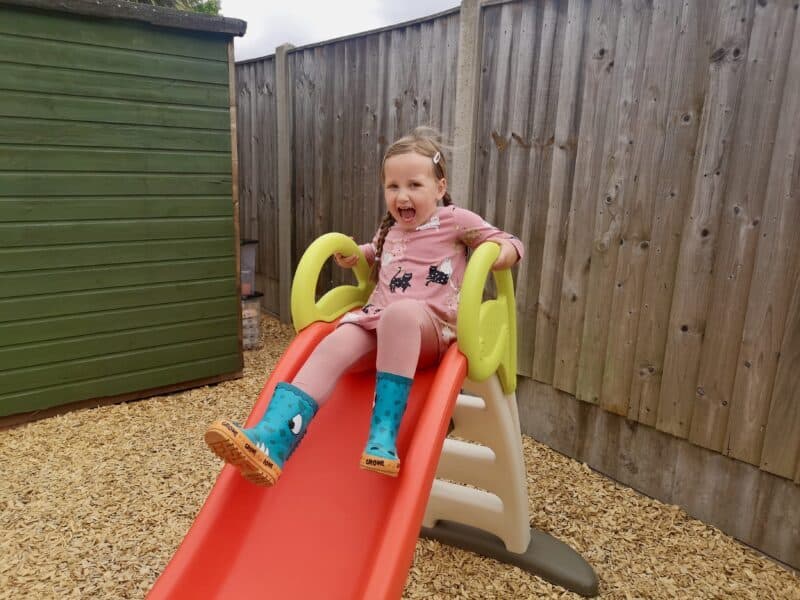 Putting the slide together took barely any time at all, something John and I always look for in new toys. We hate spending hours putting things together and most importantly, Erin doesn’t really have the patience to wait either. From taking the pieces out of the box it took John roughly 20-25 minutes to have the slide ready to play with. 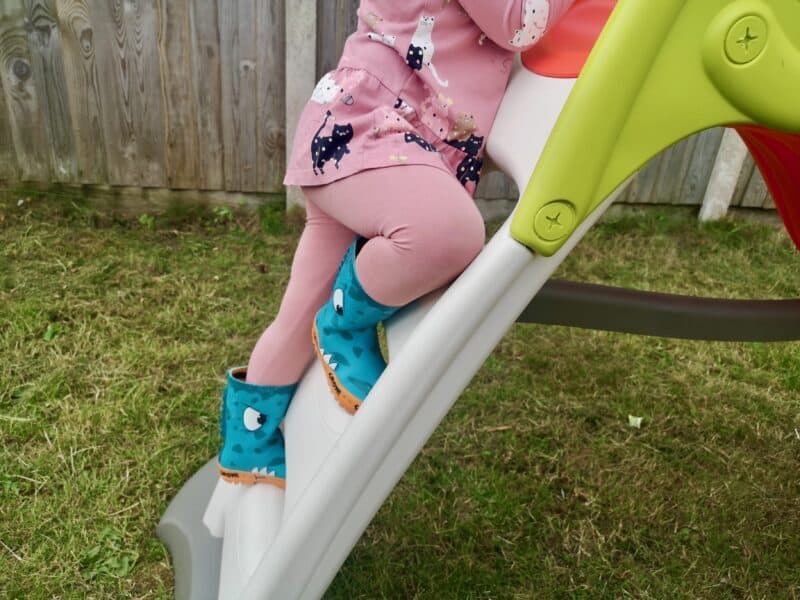 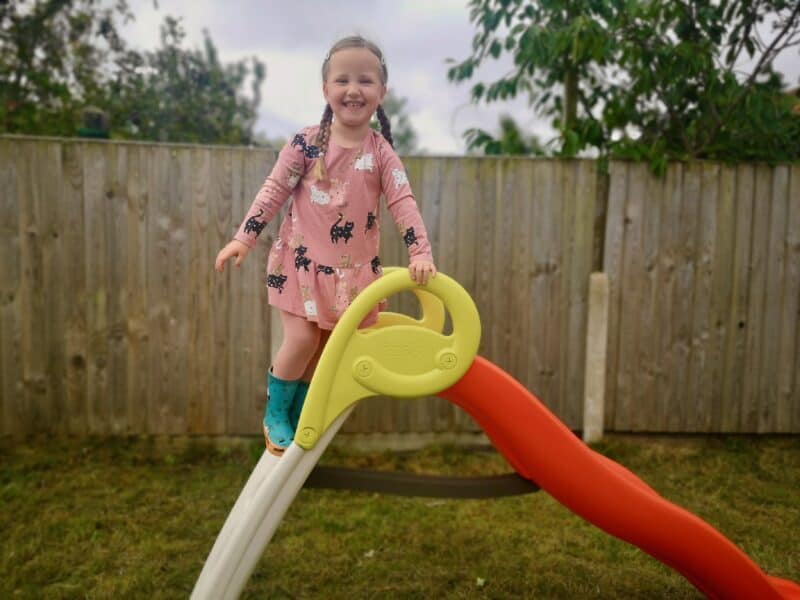 If, like us, a lot of your garden has slightly uneven ground then it won’t be much of an issue with this slide. It has a wide base which keeps it really sturdy, even when your child is zooming down it! The slide is also fairly heavy and it’s reassuring to know that the weight helps to keep it in once place. 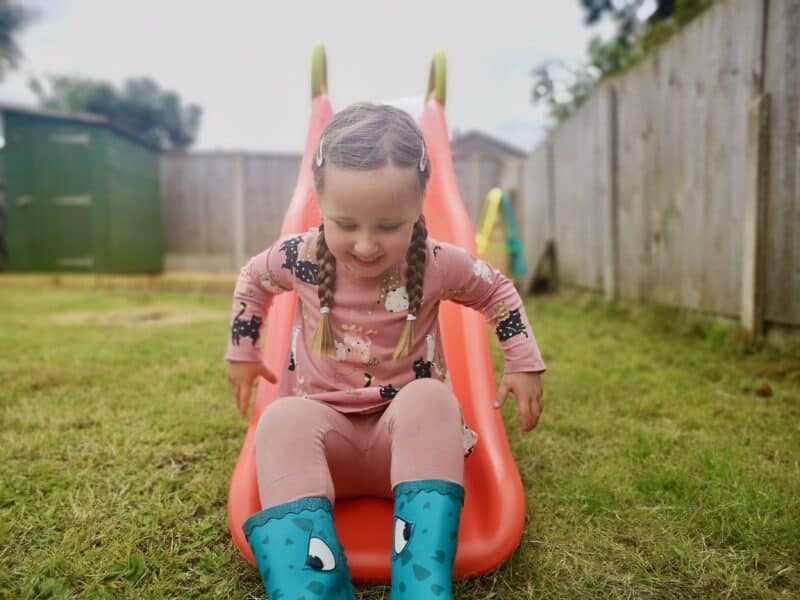 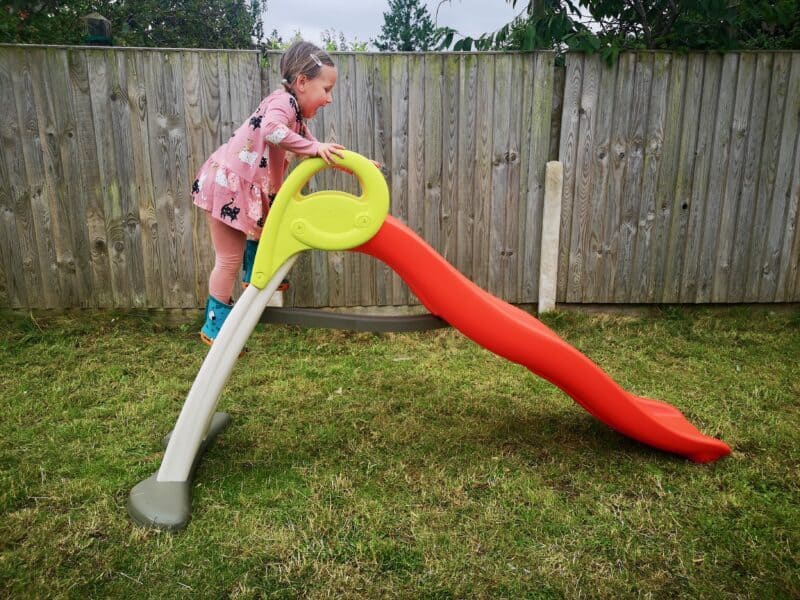 One of the great things about the Smoby Funny Slide is that although it’s large, it’s still easy enough to move around if you want to. We have a large garden with a play area covered in bark at the back, along with a large grassy area. Erin can change her mind about where she wants the slide and it doesn’t have to be stuck in one place. 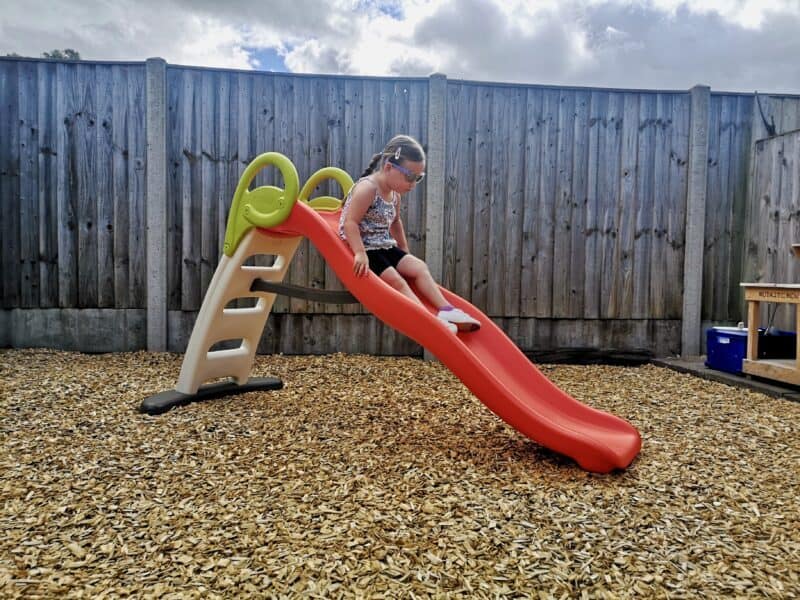 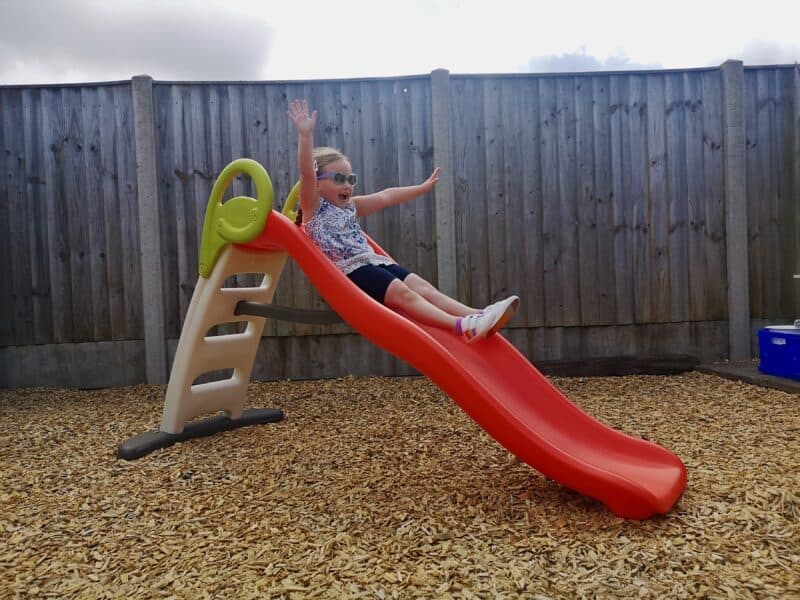 Erin whizzes around the garden and sometimes doesn’t feel the need to slow down. With wide, non-slip steps you know that your child is going to be able to climb the slide with ease, while also holding on to the large handles at the top. The Smoby Funny Slide has some really great safety features in place to ensure your child can have the most fun without hurting themselves.

A fun additional feature to the slide is that you can attach your hose and turn it into a water slide! We haven’t been able to test this out yet but I can imagine it makes hot days in the garden an absolute blast!

Smoby has a really fun range of toys for both inside and out and one of these is the Smoby Supermarket. While role play is great for indoors, it can also be easy taken into the garden. 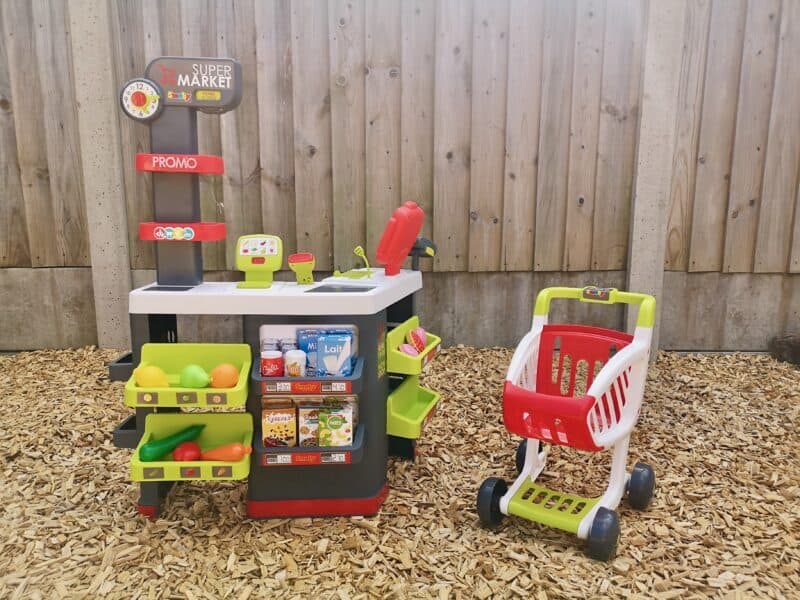 When you’re spending quite a lot on toys you want your child to be able to use them in their maximum capacity. The supermarket is quite lightweight so it can be moved around easily. For us, this means being able to keep it safe in the shed after we go back inside, or if Erin wants to play with it in the living room instead. 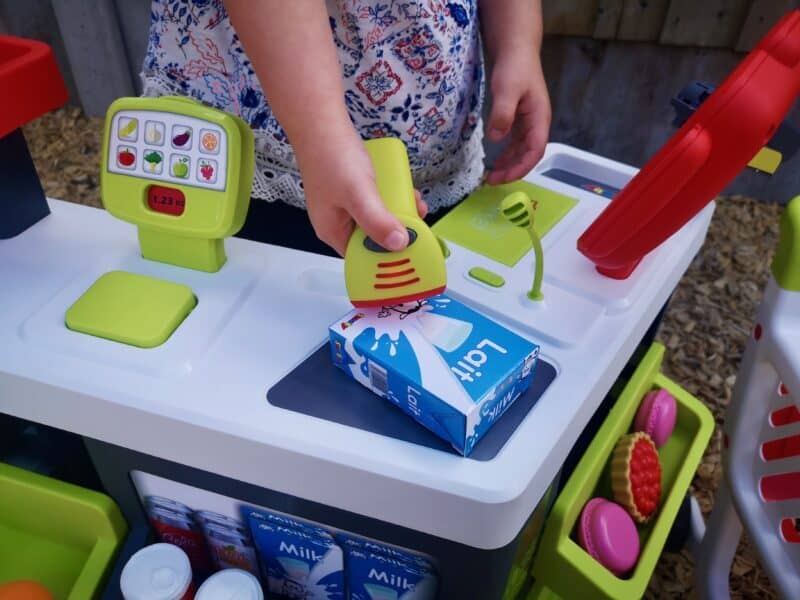 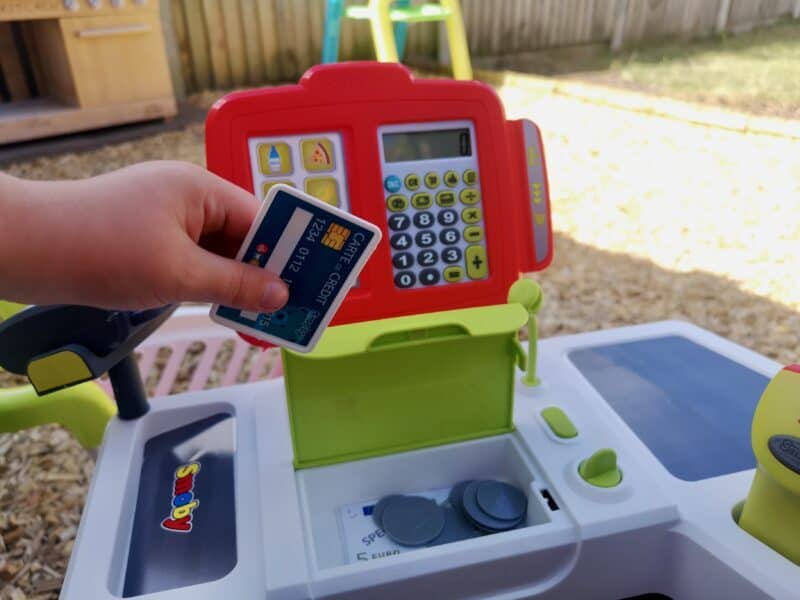 This supermarket has some really cool features. The card machine actually pops up a receipt (plastic card) after the shopping has been paid for, the till comes with a real calculator and the scanner flashes a red light when you press the button! We have had a play shop before but it was really very basic and now that Erin is older, she is able to use her imagination more and these features help to extend her play. 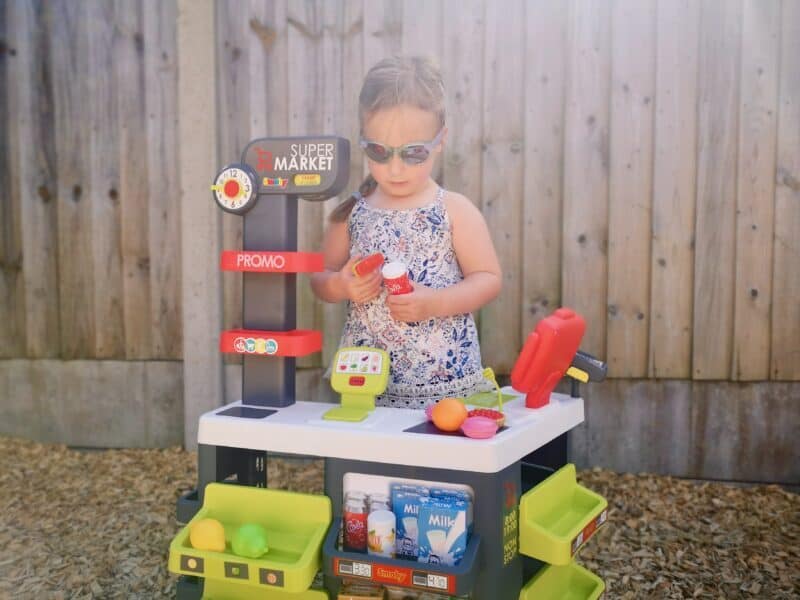 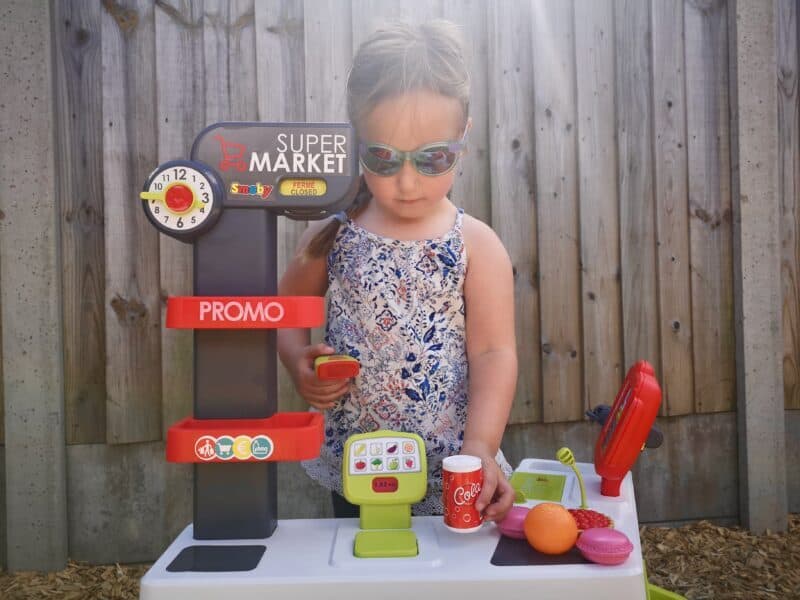 Something I would have liked to have seen is different money with the set. It comes with Euro notes and coins but obviously as this isn’t the currency we use it’s not quite as good as it could be to help children learn about money. We have replaced the money since just so that it’s something that Erin can recognise more easily and so that it’s something we can do educational play with. 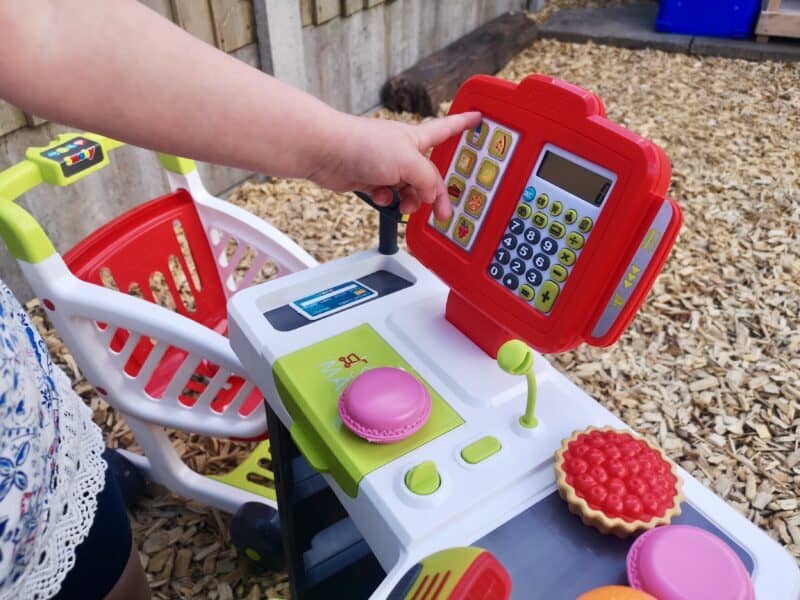 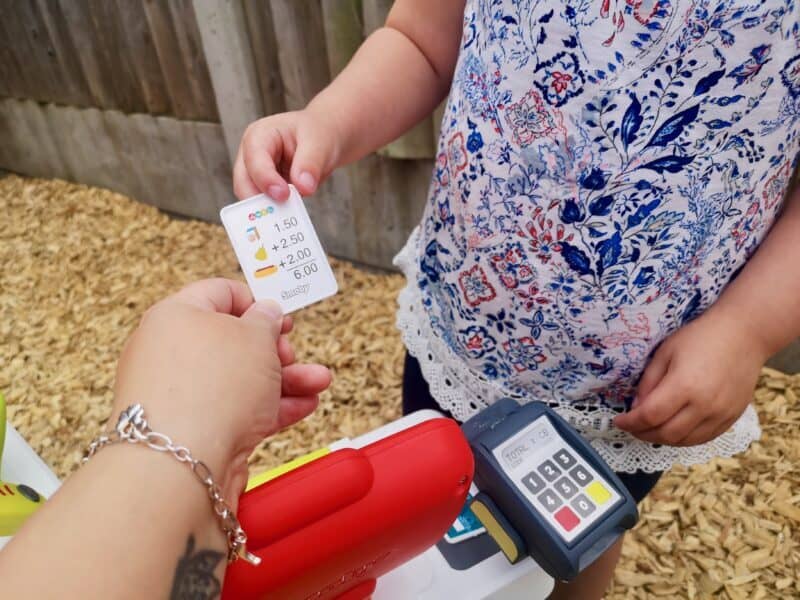 The supermarket comes with accessories such as a shopping trolley and a selection of food. The range of food isn’t very big so to really get the most out of this toy it would be worth investing in some additional pieces. However, you get just enough to get started and I love that some of the items were things like macaroons and I think a cherry pie! We already had a large selection of play food that we were able to add ourselves. 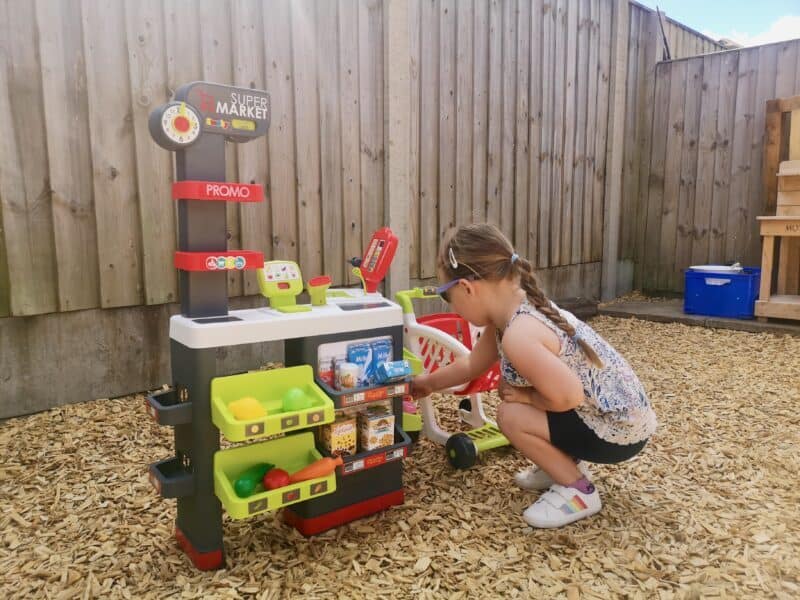 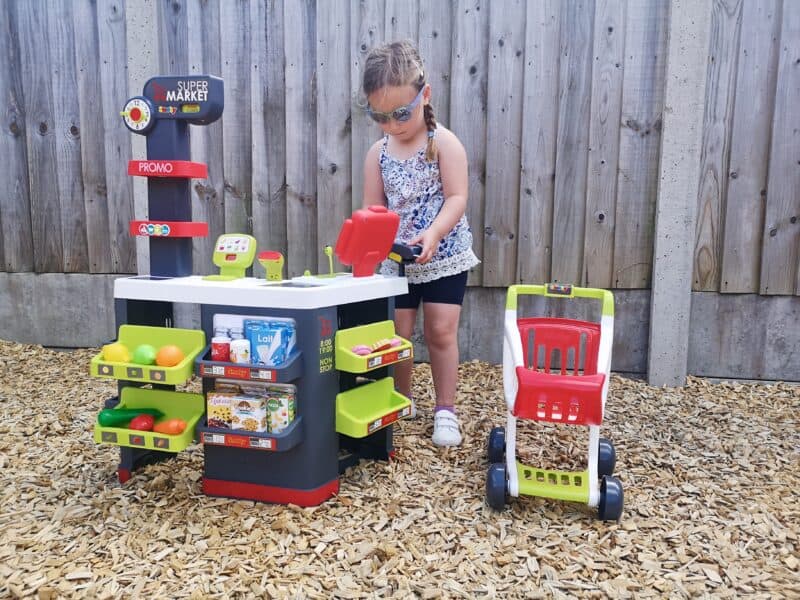 The Smoby Supermarket can provide hours of fun for children and I know that this is going to be something Erin plays with for years to come. You can buy this from Very, with a SRP of £74.99.

We might not have had these toys that long but Erin has played with them both so much. Who needs to go to the park when you have a massive slide in the garden? 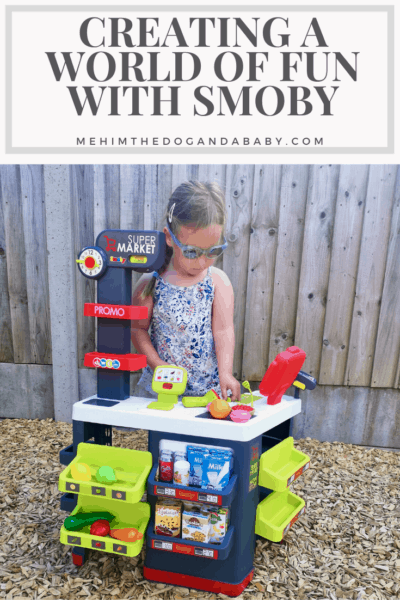 11 thoughts on “Creating A World Of Fun With Smoby”