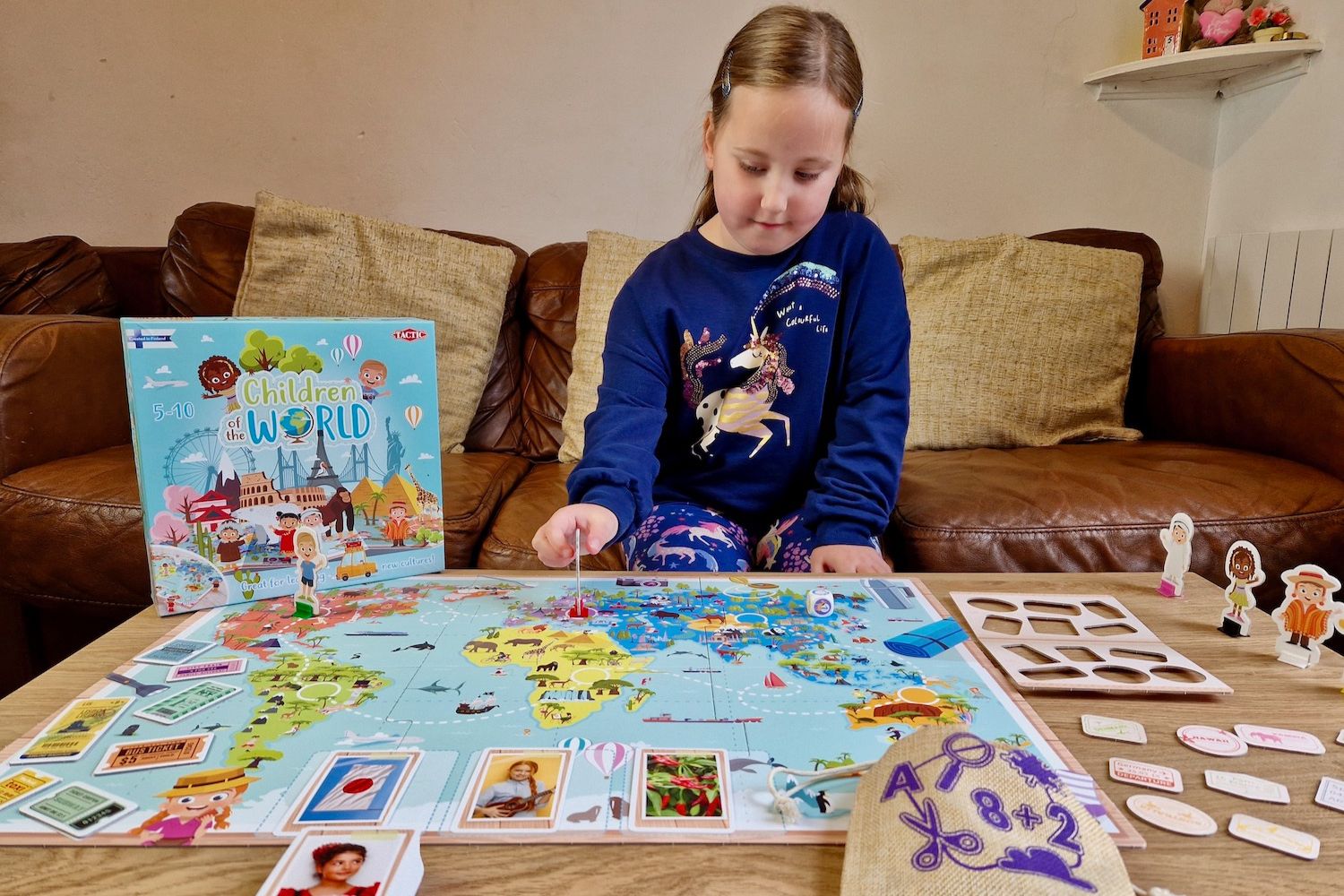 Being a family who loves to travel, I think it’s important to learn about the world but sometimes that can be hard to do with children. Tactic Games have a great game for kids though; Children of the World and we recently got to play it with Erin.

This game represents a small part of the many colourful, beautiful and diverse peoples, cultures and nature that exists all around us.  Play together and cooperate, earning stamps in the passport by answering questions or completing tasks.

With 100 cards full of pictures, questions or tasks, you can explore the world to find the answers or learn about different cultures.  An interactive game with lots to play with and lots of fun because you play together as a team.

The game can be played without questions for younger children who don’t yet read.

How long does it take to set up?

Initially, there are a few things to do when taking the game out of the box for the first time. The actual board game itself consists of 6 pieces which go together quite like a puzzle. This part will need to be done every time you play the game.

Several other pieces need to be removed from their ‘sheets’ such as tickets, passport pieces and conductor tokens. This only needs to be done before playing the game for the first time and after that, your pieces are all ready to go.

Setting up the game after this only takes a couple of minutes.

Children of the World is a relatively easy game to play and is aimed at children aged 5-10 with 2 to 6 players.

There is also a much easier way to play the game for younger children or if maybe you want a quicker game. Instead of asking questions on the cards, you can play just by trying to guess the correct continent.

Did we enjoy the game?

Although the rules sound a little complicated to start with, they’re really easy to pick up once you start playing the game. Although the box says for children aged 5-10, we played as a family. There’s always something new to learn about the world so don’t feel as though this game is just for children.

Some of the cards are trickier to guess than others. At the minute, aged 6, Erin doesn’t know a whole lot about the world so some were quite tricky for her. On the other hand, there was a fair amount that she could guess or some she did actually know.

The great thing about this game is that whether children know some of the answers or not, there is so much to learn. The questions on the cards are great and by being multiple choice, children have a chance to guess. Even after you have done a card, there’s a good chance that some things will be forgotten so you’ll be able to play this game over and over again.

The board, and pieces, are fantastic too. There’s a lot of detail on the map which adds another level of learning to the game. Some of the cards ask you to find things, which everyone can look for. Children will really enjoy figuring out things like which animals come from which continent etc.

Buy Children of the World from Mulberry Bush Games.