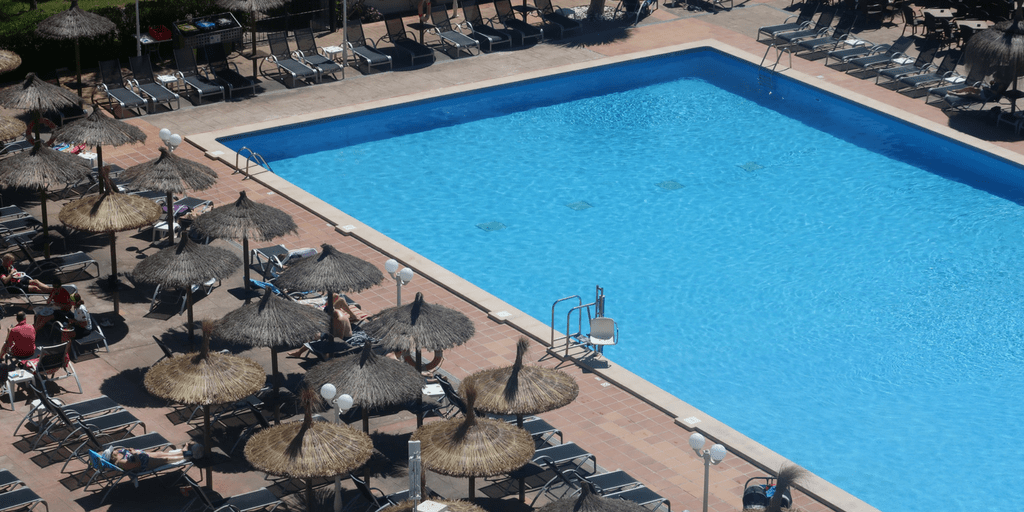 A couple of weeks ago we went on our very first family holiday abroad to Majorca and we stayed at the FERGUS Style Pollensa Park SPA in Puerto Pollensa. Choosing a hotel online can be quite tricky as you never really know what to expect but luckily a few people I know have stayed here before and told me how nice it was. We booked our holiday through Jet2 but this hotel can be booked elsewhere as well.

From the airport was had a transfer which took us right to our hotel. On the way, we also stopped off at others in Puerto Pollensa and the FERGUS Style Pollensa Park SPA Hotel was by far the biggest and most impressive. As we entered the lobby I was pretty impressed with how nice it was. We arrived at about 2:40 and as we were being checked in we were advised to put our cases in the storage room and go straight to the restaurant so we could get dinner. It was really nice that they sorted everything out for us while we got something to eat after travelling. 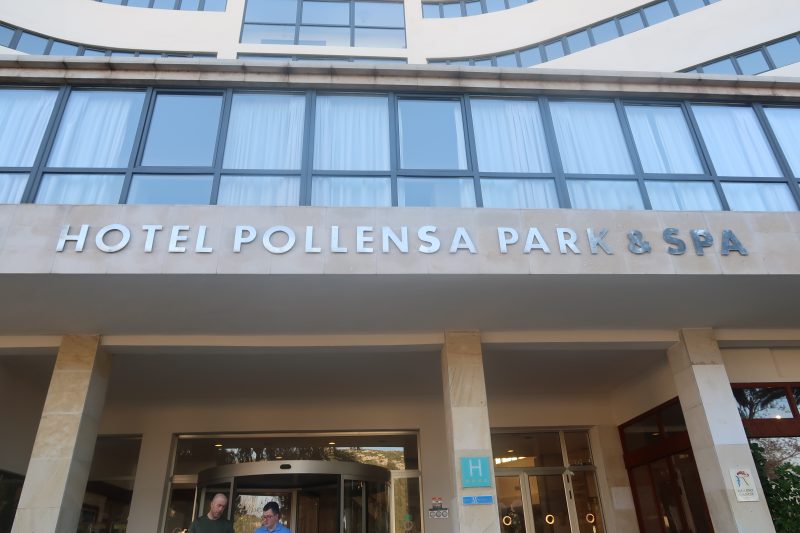 A local tourist tax is payable and during our stay this was €0.83 per day, per adult over 16. Also, to use the safe in the room you also need to pay a fee of €3.50 per day plus a €5 deposit. I was glad that I looked this up before we travelled as it would have been an extra €41 I had not planned for.

The hotel has loads of facilities which include: 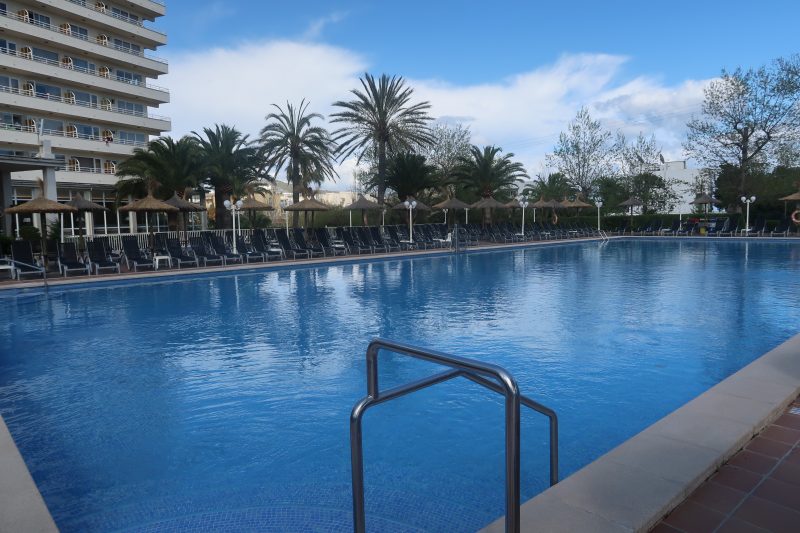 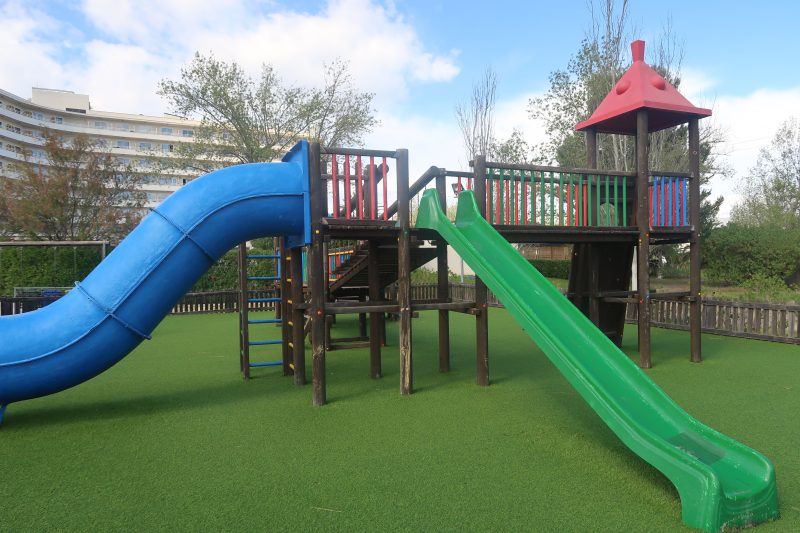 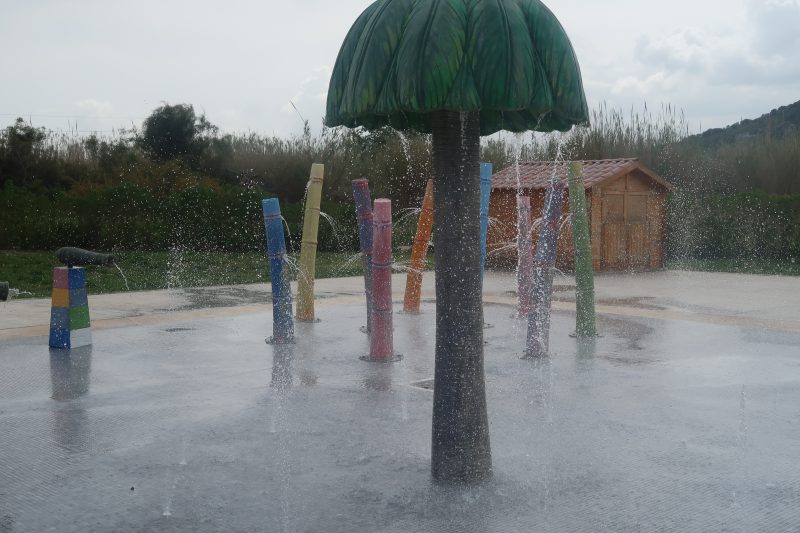 The main part of the room consisted of 2 beds pushed together and a travel cot had been set up next to the balcony window ready for when we arrived. This sleeping area of the room was really quite large and as well as the beds, there was a large desk, bench seat and a large chair. There was also a really big wardrobe space which included drawers and shelves. Here, there was also a safe which as mentioned above, you have to pay to use. Even though there was 3 of us in this room there was more than enough space for all of our things. 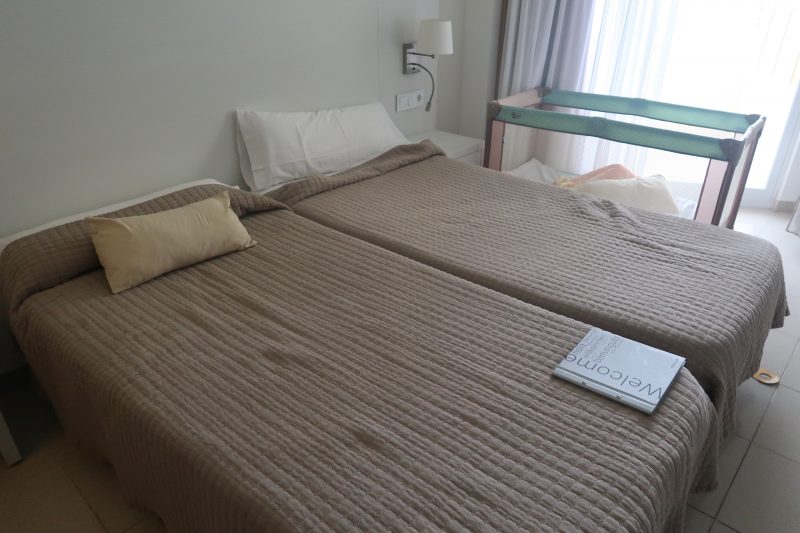 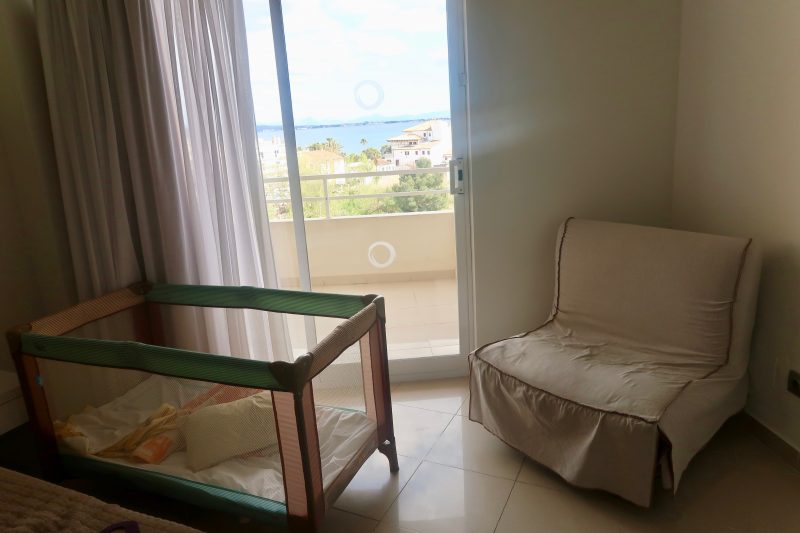 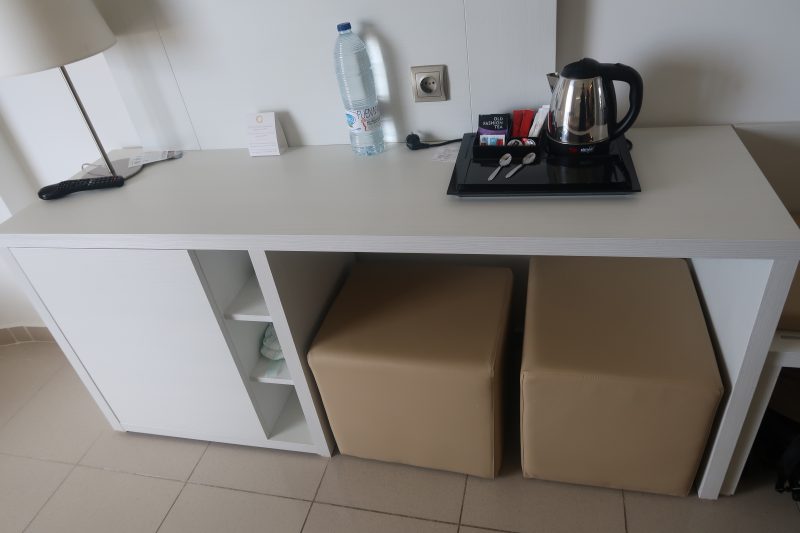 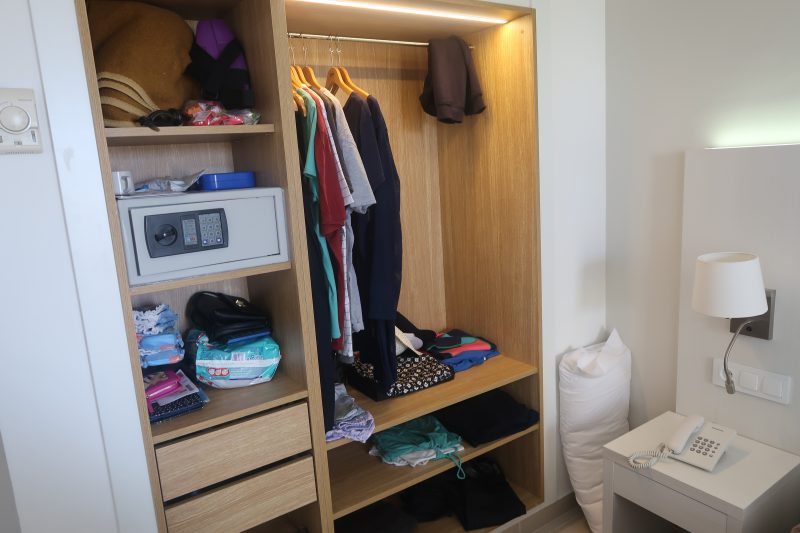 One aspect of the room that I was really impressed with was the bathroom. It was huge. We had a really big sink with storage space underneath as well as extra shelves and a bath with shower above. When travelling with Erin it really makes a difference to have a bath for her and it also helped to have plenty of space to get her changed/ dressed in the bathroom rather than on a bed. 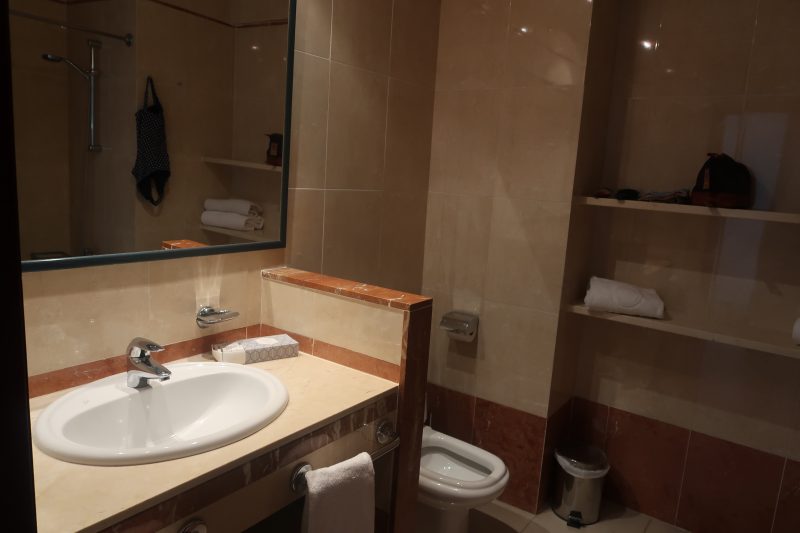 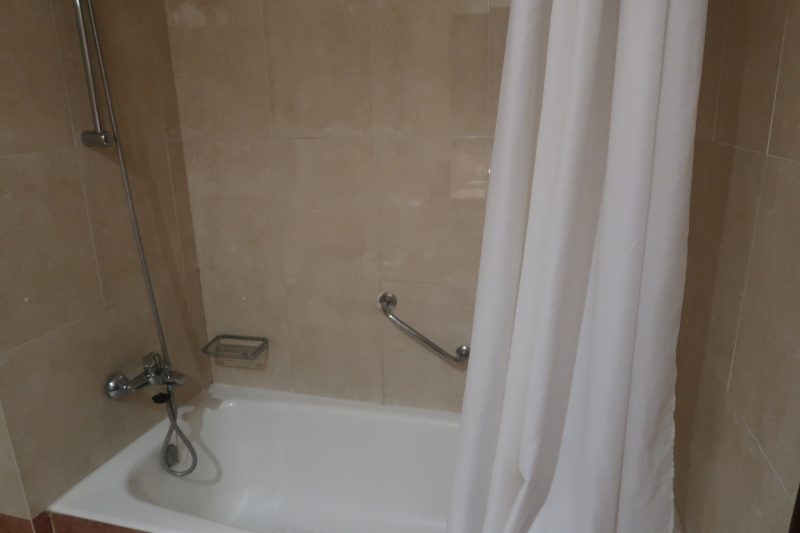 I was really very impressed with our room. We had loads of space in the ‘hallway’ to store our suitcases so that they didn’t get in the way. However, this hotel only has the air con running in certain months and April is not one of them despite it being 20ºC and above every single day. I really struggled to sleep most nights because I was just so hot. We couldn’t leave the balcony door open for obvious reasons like mosquitos or Erin escaping somehow.

One other issue that we had was that our door, and I imagine all room doors, could not be locked from the inside. If Erin had been sleeping in a bed rather than a travel cot I would have been a lot more worried because she can now open doors really easily and she did so more than once during our stay.

We were on an all inclusive package so were had three meals a day and snacks in between. All inclusive runs from 10am until 11pm and when you check in you receive a wrist band so that staff know what you can have and what you can’t. Full board is also available which includes breakfast and dinner but without drinks at dinner.

There was a lot of choice when it came to food. This was our first all inclusive holiday so even though we tried to look online, we weren’t sure what to expect. Unfortunately for me because I’m a picky eater there wasn’t a lot of options. However, that’s not really the hotel’s fault because John LOVED the food. He was so happy being able to try different kinds of fish every day and having really varied meals. Erin and I didn’t do quite as well but we managed and it was easier than having to go out to eat every day.

Here are some examples of what was on offer:

Dinner – very similar to lunch but with slightly more variation 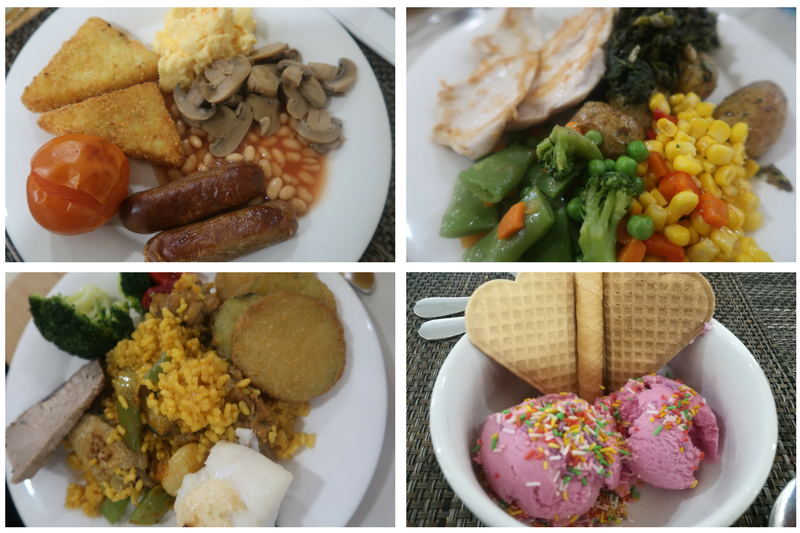 What I will say is that all inclusive was about £200 more than half board for the week (for all 3 of us) and this worked out to only £35 a day for all of our food. If we had gone out to eat it would have cost at least €35 per meal. Not all drinks were included but anything you did have to pay for was half price for all inclusive guests. We were happy with the drinks we did have as I don’t really drink alcohol anyway. John had beer a few times and we also drank plenty of soft drinks, fruit juices and bottles of water.

I’ll be writing a full review of this part of our holiday so be sure to look out for that.

As we visited out of season there wasn’t much in the way of entertainment. The seasons starts from 1st May so we were a couple of weeks early. However, each day there was a certain number of activities set up for adults every hour nearly from 10:30 until 4:30. These activities included things like archery, rifle shooting, cocktail games and even a dance lesson. 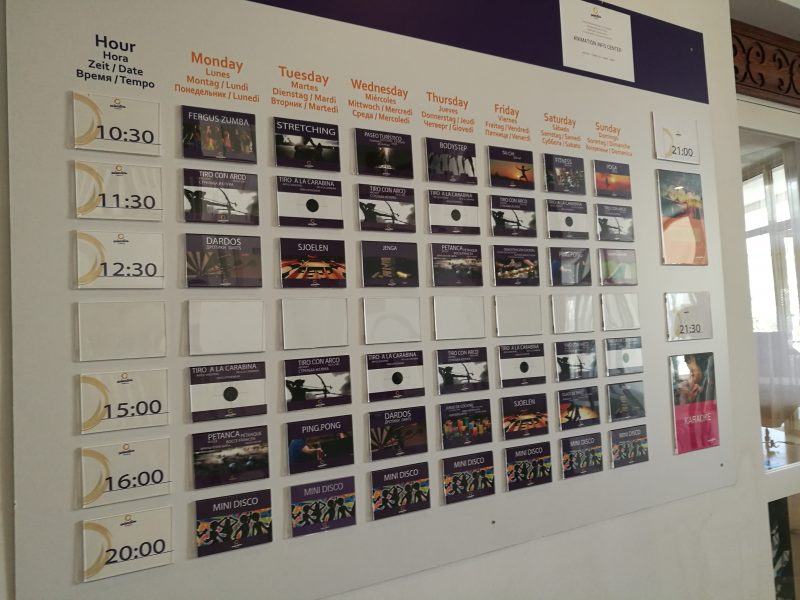 I didn’t really think I’d be interested in doing any of these activities but I gave archery and rifle shooting a go and really enjoyed it. Out of season the hotel is full of cyclists so it’s very quiet during the day. When we did archery no one else wanted to so me and John got to have a go just the two of us which was really fun. 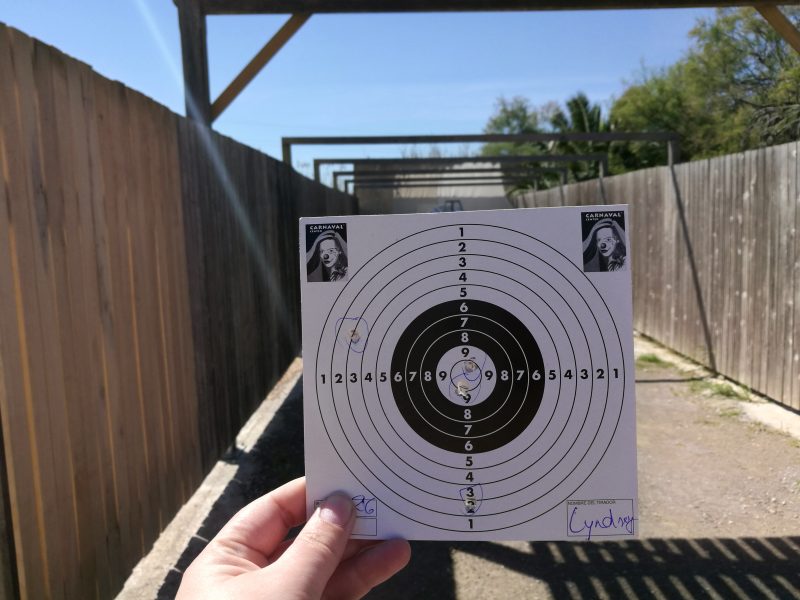 Although there wasn’t a lot going on we did spend some time talking to the entertainment staff. Emily did a lot of the day time activities and she was really fantastic. Her, along with Andre and trainee Cam, helped to make our holiday what it was. All three spent time trying to engage with Erin and in the end, she would spend ages shouting EMILY, EMILY, EMILY because she liked her so much. The staff at this hotel are really something special and I can only imagine how much fun the kid’s club is during the season for children 4+. 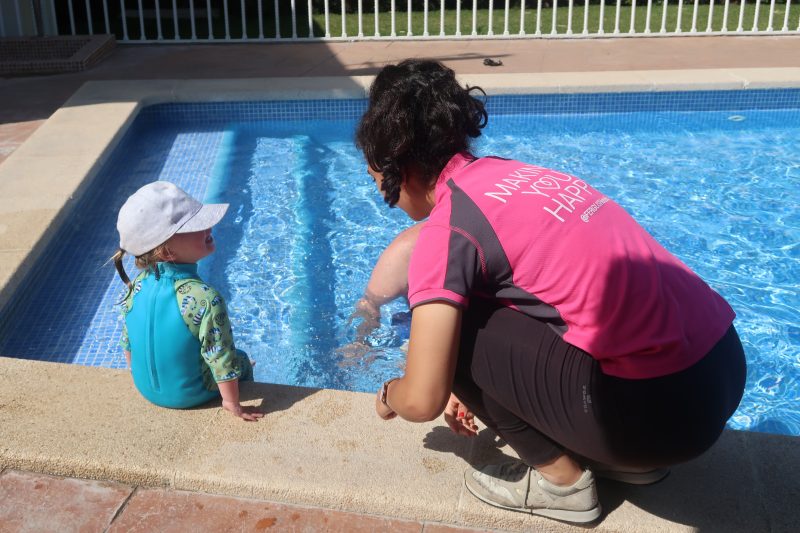 Even though there was no entertainment for Erin she was happy enough playing in the children’s pool and at the play area. At one point, Erin was the only child in the hotel for a few days so she actually loved having the place to herself. We did go to the beach every morning as well because otherwise, there really wasn’t enough to keep a 2 year old occupied all day.

The FERGUS Style Pollensa Park SPA Hotel was an absolutely wonderful place to stay for our first family holiday abroad. Although the hotel was really quiet in terms of entertainment and activities for a 2 year old we made it work for us and we were really quite happy with how we spent our days. Erin isn’t used to holidays like this yet so I think we went at the right time of year for us. I would love to go back at some point though to see what the differences are and to see some of the evening entertainment that we didn’t get.

Fancy a better look around? Take a look at our tour video below: 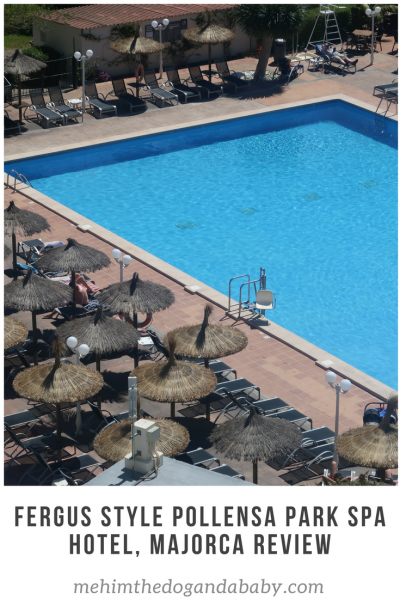