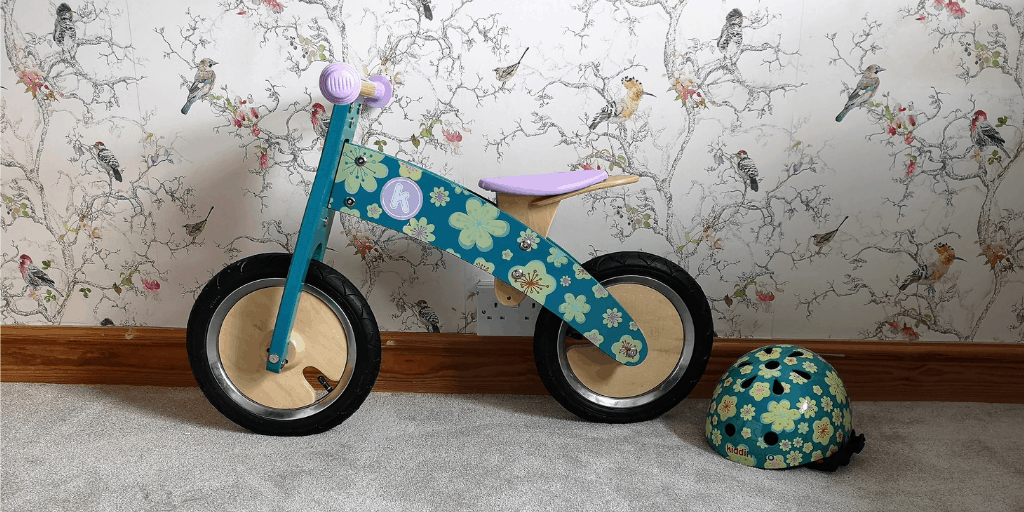 Erin wanted a bike pretty much as soon as she walk. She saw other children on theirs and desperately wanted to be the same. Up until recently Erin had a Toddlebike2 and has really enjoyed riding it. She’s gone from practising in the living room, to playing in the garden and then to going for a ride down the street.

As she turned 3 earlier this year the Toddlebike2 was no longer working for Erin and it was just too small for her. We decided to upgrade Erin to a balance bike and Kiddimoto helped us out with one of their wooden bikes with a matching helmet!

When the bike arrived I was really very surprised at the size of the box that it came in. It was a lot smaller than I expected but everything was well packaged and there really wasn’t many pieces to it. With 2 wheels, 2 main body pieces and handlebars assembly looked really simple and easy; something I was really happy about! 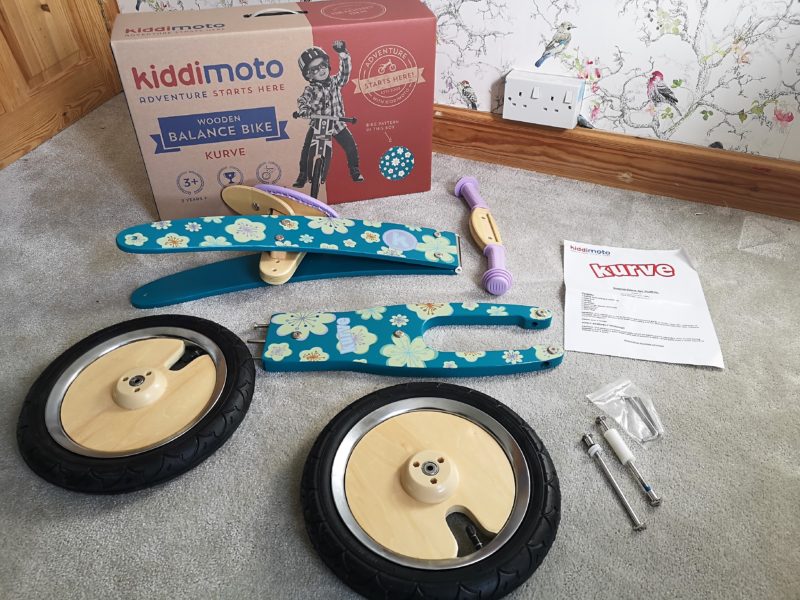 The bike only took about 10 minutes to put together and it probably could have been done a bit quicker but the pictures on the instructions weren’t as clear as I’d hoped. The thing that took the longest time was tightening the screws and in the end I had to get John to help just because I couldn’t quite tighten them enough. It’s important to make sure the bike is put together properly to ensure your child will be safe while riding it. 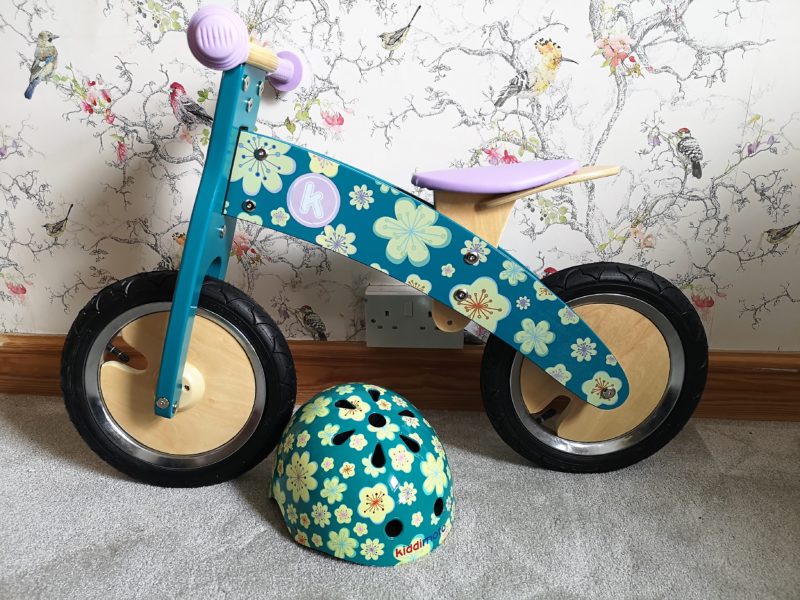 I absolutely love that there is a helmet to match the design of the bike. There is also a matching set of gloves too! I chose the brightly coloured Fleur Wooden Balance Bike because it came in a cool colour but was also a bit girly with the flowers at the same time. There are 4 other designs to choose from such as cherries and the Union Jack flag. 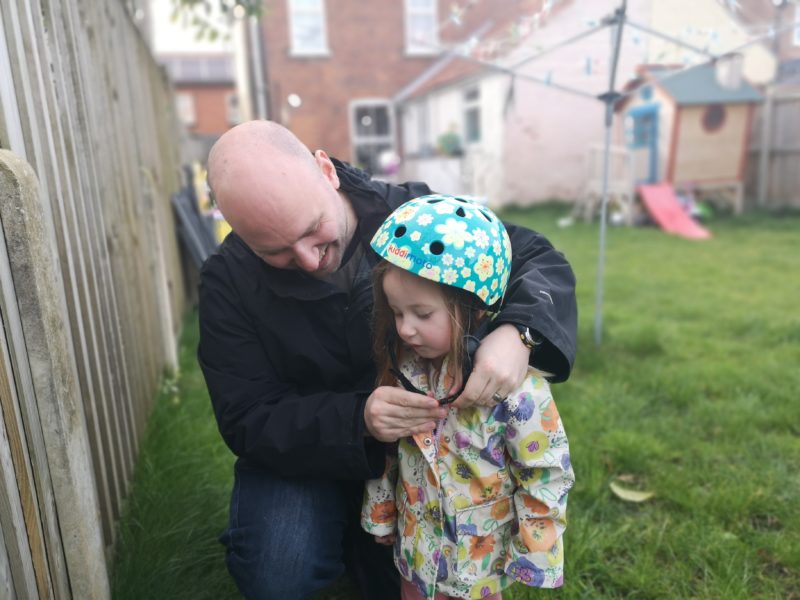 Erin was so excited when we showed her the bike and declared it her big girl bike. We had bought a helmet previously for Erin’s scooter but she is quite small for her age and it didn’t fit very well at all even though it was the smallest size. Our other helmet wobbles around a lot due to a bad fit so we haven’t been able to use it. The Kiddimoto helmet is suitable from age 2 so I really hoped it would fit better… and it did! The helmet can be altered in a few different places to ensure your child’s head is protected as well as possible as well as being comfortable at the same time. 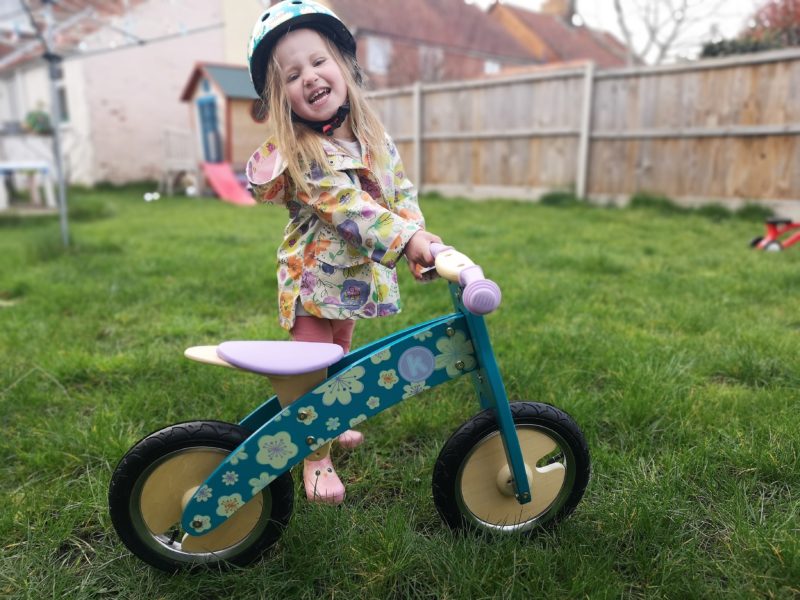 As you can see, Erin was so excited to try out her new bike in the safety of the back garden. Unlike her old bike, this one doesn’t have 3 wheels and has to be ridden in a completely different way. Of course, Erin wanted to do everything herself and refused help immediately. She quickly realised after falling on the floor a couple of times that she might actually need us to show her what to do. 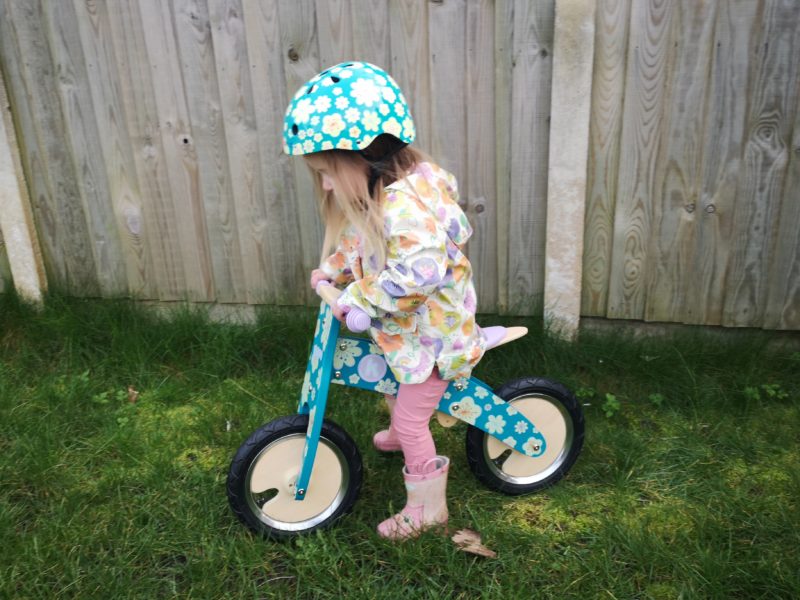 John helped Erin to get used to the feeling of the bike and showed her what to do with it. Riding a balance bike was such a new experience for Erin and she didn’t take to it very well but I think there’s a simple explanation for that. As I mentioned earlier, Erin is really quite small for her age and has only just gone into 2-3 clothes in the past couple of months. Erin’s feet don’t quite reach the floor when standing over the seat of the bike so she isn’t able to push it around like she should. 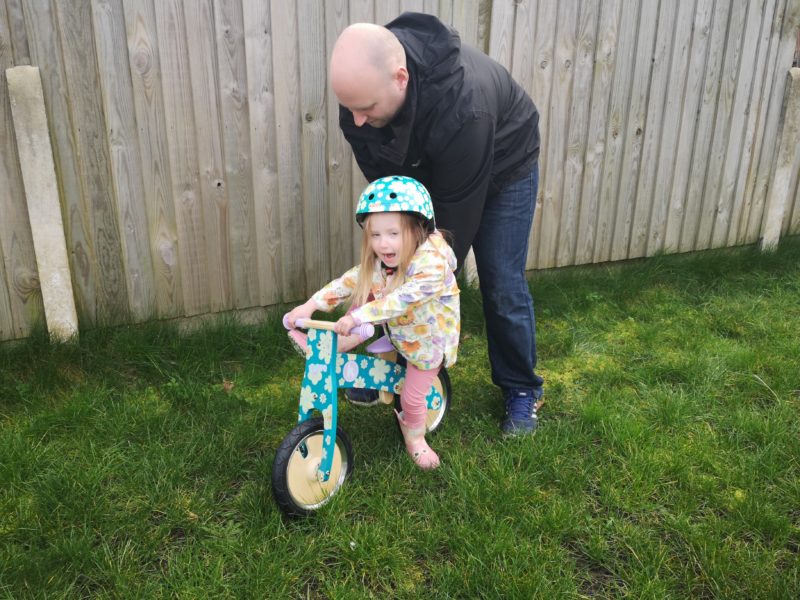 Although Erin is struggling a bit so far with the balance bike she still enjoys using it every time we go into the garden. I think one of the most important aspects of learning to do something new, such as learning to ride a balance bike, is being comfortable with it. We are going to keep going out in the garden and spending 15-20 minutes with the bike at a time until Erin grows a little bit and feels safe to take her feet off the ground! 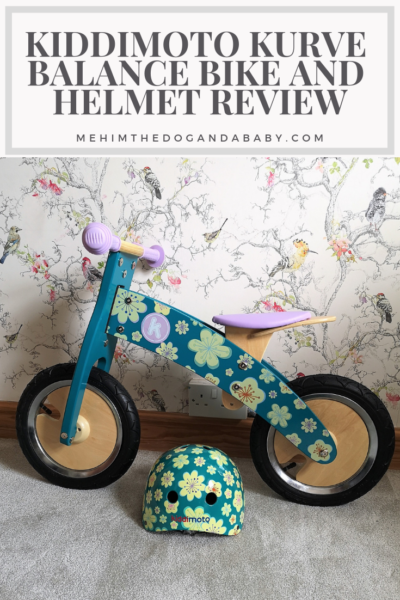