There are a few things I never learned to do as a child that I think are probably pretty standard. Something I never learned how to do was ride a bike. I think my uncle tried at some point but I have no idea what happened. This is something I really want Erin to learn how to do and we’re starting her quite young! Recently, she has been trying out the ToddleBike2!

If you don’t know what a toddlebike is, just like I didn’t before we got one here is a little information:

The ToddleBike2 is a pre-balance bike, meaning it can be used before balance bikes, pedal bikes or scooters etc. but after ride ons.

With Erin now being 20 months old, she’s only just old enough for this but she has been walking confidently for months and months now. She has a trike that she loves going on so this really is the next step up for her.

John had a week off work recently and the weather was gorgeous so we headed over to the park to let Erin try out the ToddleBike 2 for the first time!

Erin was pretty amazed but really didn’t understand what she was supposed to do for a little while. As you can see, it was all a bit backwards to start with. However, it didn’t take her long with a bit of help from me and John for her to get it a bit more. 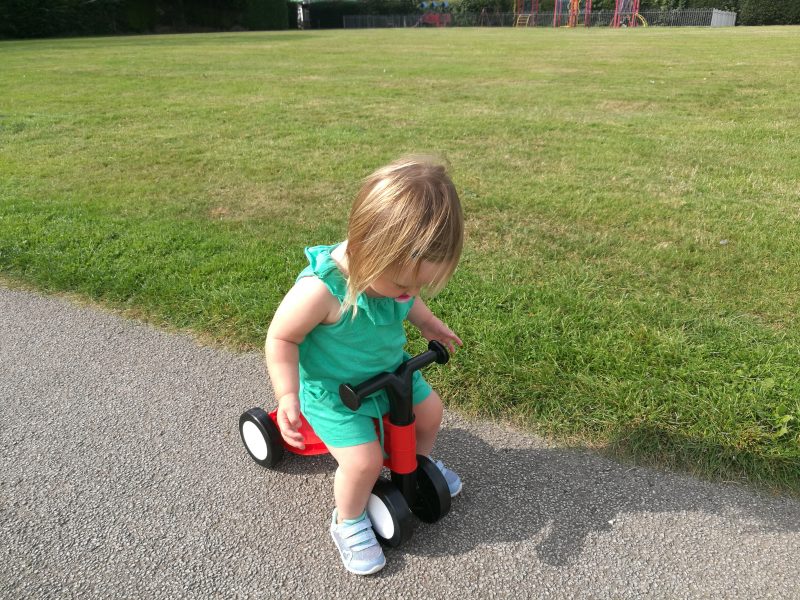 For Erin’s very first try at this, I think she did incredibly well. I think she was probably happier walking around with it rather than being sat on the seat but the more we go out with the ToddleBike2, the better she’ll get at it. Having something like this is really helping Erin to gain confidence and realise the things she is capable of on her own.

What I love about the ToddleBike2 is how lightweight it is. If I wanted to take Erin out somewhere to play with it, rather than have it in the garden, I could quite easily carry this as well as push the stroller. To make things even easier, we could use a strap of some kind to attach the ToddleBike2 to the stroller. As a family who don’t drive, this is really important for us as we don’t like to be too limited.

The ToddleBike2 is made from plastic but as there aren’t really many separate pieces to it, it is pretty sturdy. It comes with a 3 year guarantee too which gives me great peace of mind!

I am so happy with our ToddleBike2 and Erin is going to get so much use out of it. It is suitable for both indoor and outdoor use so the bad weather won’t stop her!

1 thought on “Gaining Confidence With The ToddleBike2”