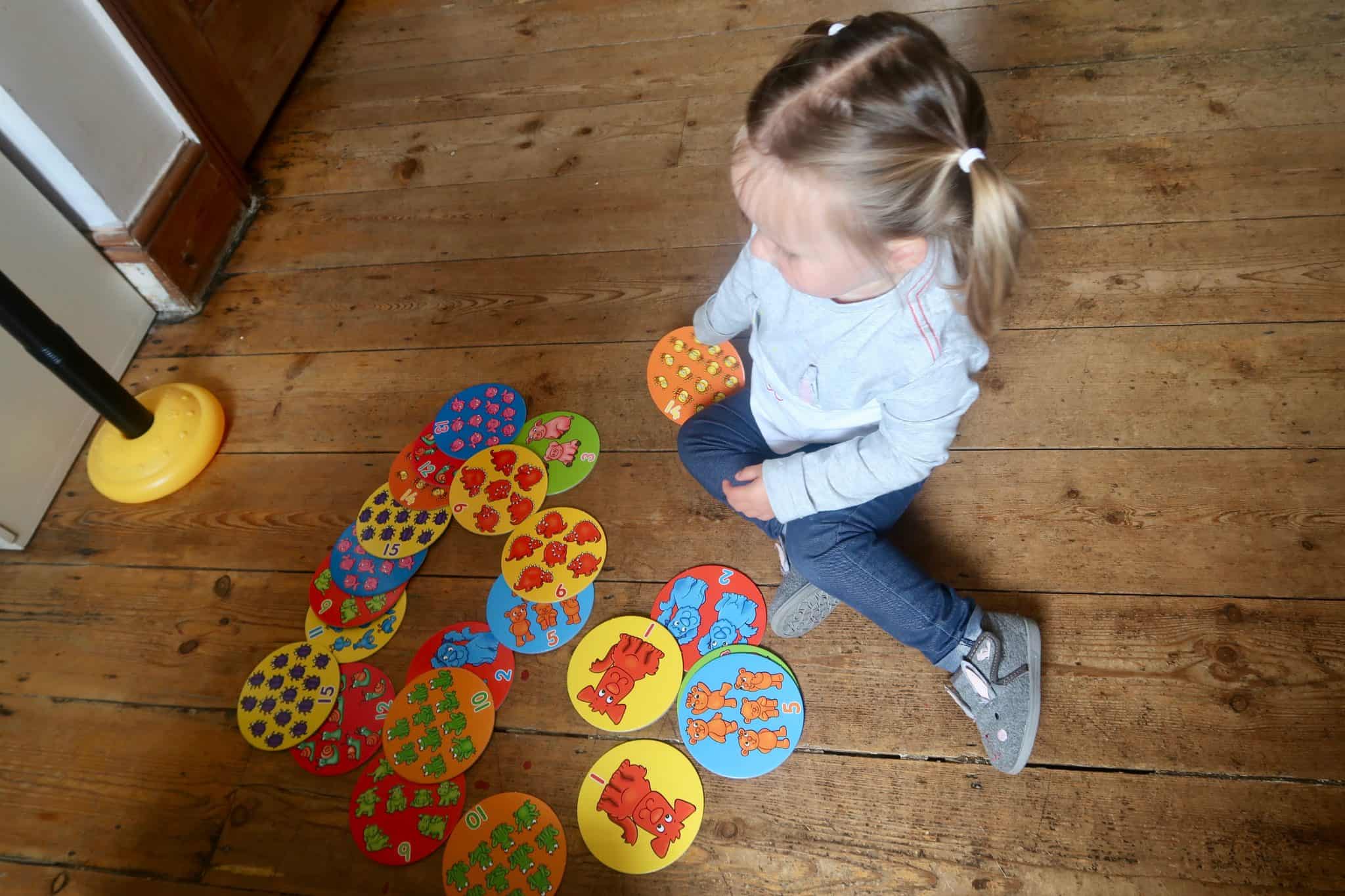 Erin is becoming more and more interested in learning in different ways but most of all, she loves to play games and we are huge fans of Orchard Toys. Erin already has a few different games but we were recently sent One Dog, Ten Frogs which is a numbers and pairs game. One Dog, Ten Frogs is aimed at children aged 3 and up and while Erin isn’t 3 until January, she is really doing well with learning numbers so I thought this would be a great choice for her at the moment.

Inside the box you get 30 discs which are paired up from numbers 1-15. Each pair of discs is numbered and has pictures of animals corresponding to that number. The aim of the game is to pair up each of the discs. 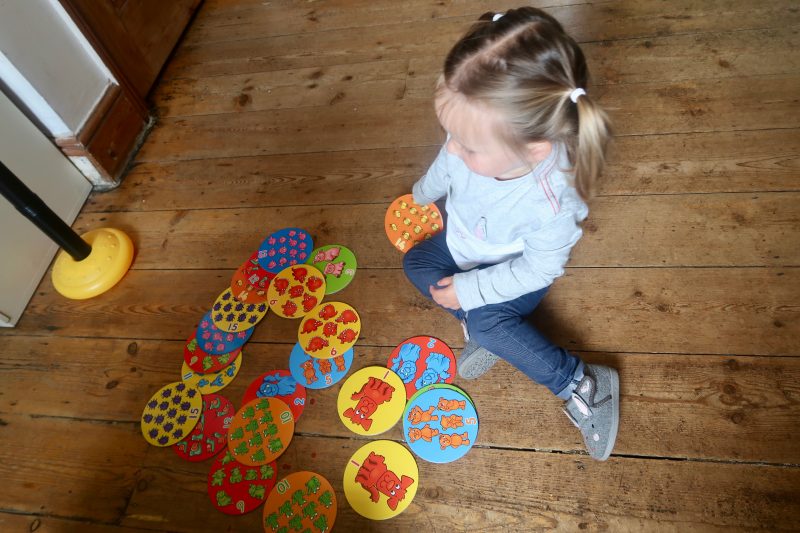 Erin very quickly understood that some of the discs were the same and she set about figuring out which went together. One Dog, Ten Frogs also comes with a chart so that you can check which numbers go with which pictures and also to show you which animals there are to find. I really liked that there was this addition resource as it helped Erin to work along the numbers and find each one in a nice order. Of course, you don’t have to find them in number order but Erin liked to work her way along the chart. 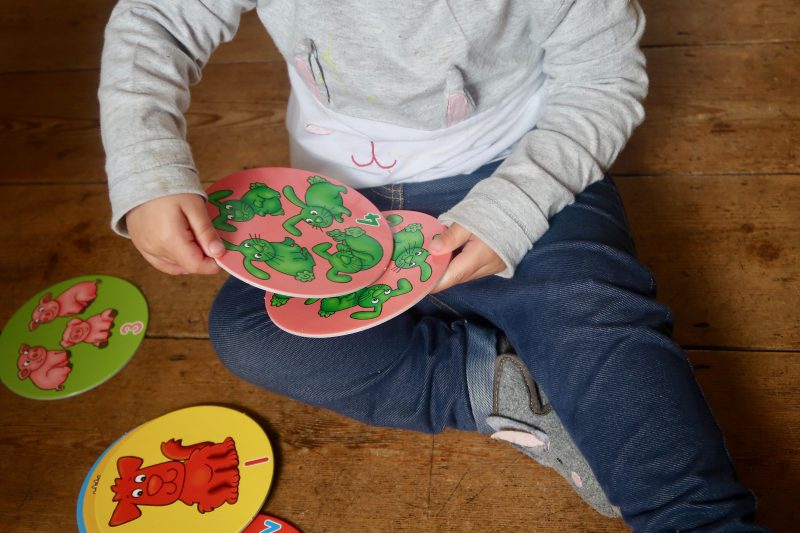 Orchard Toys love to use really bright and bold colours and One Dog, Ten Frogs is no exception. The discs are jumbo sized so Erin is able to pick them up easily and she can also see the numbers and animals clearly as they are so bright and stand out from the background colour. Not only are we able to help Erin learn numbers with One Dog, Ten Frogs but we also use the discs for colours and for learning the names of the animals as well. 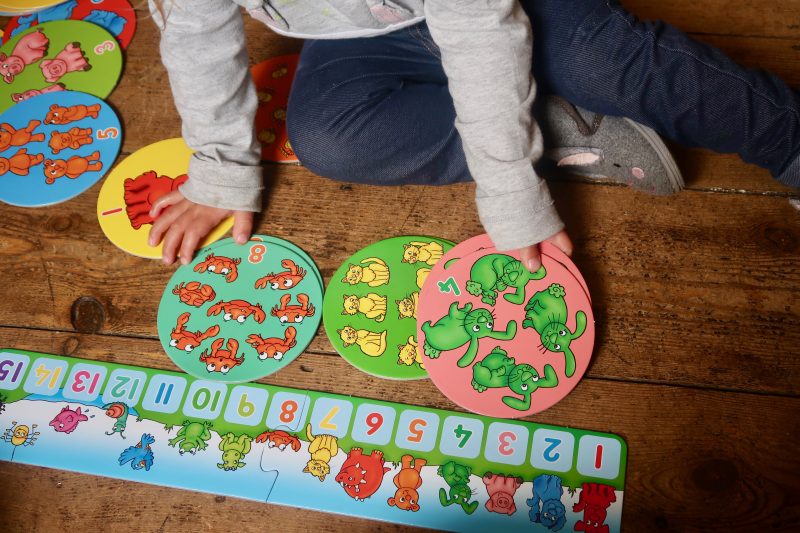 Something I love about One Dog, Ten Frogs is that it doesn’t have to be played with in just one way. Instead of using the game to match the pairs in the way I described, you could also turn each of the discs over and try to match them by memory. Obviously, this would be something aimed at children older than Erin but I think it would be a great way to help children develop their memory and have fun doing it!

Erin has really enjoyed playing with One Dog, Ten Frogs so far and like the other Orchard Toys games we have, I know it’s one she’s going to keep on going back to because it’s so much fun! 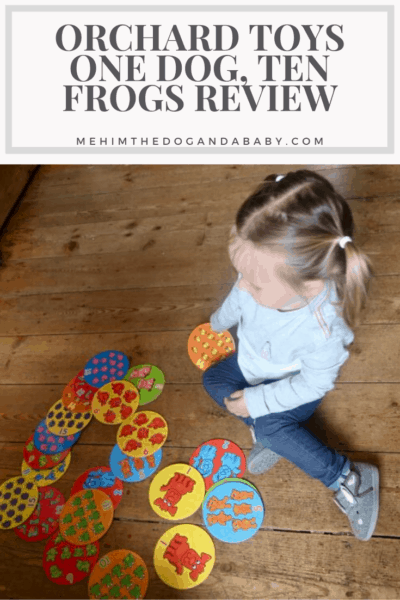