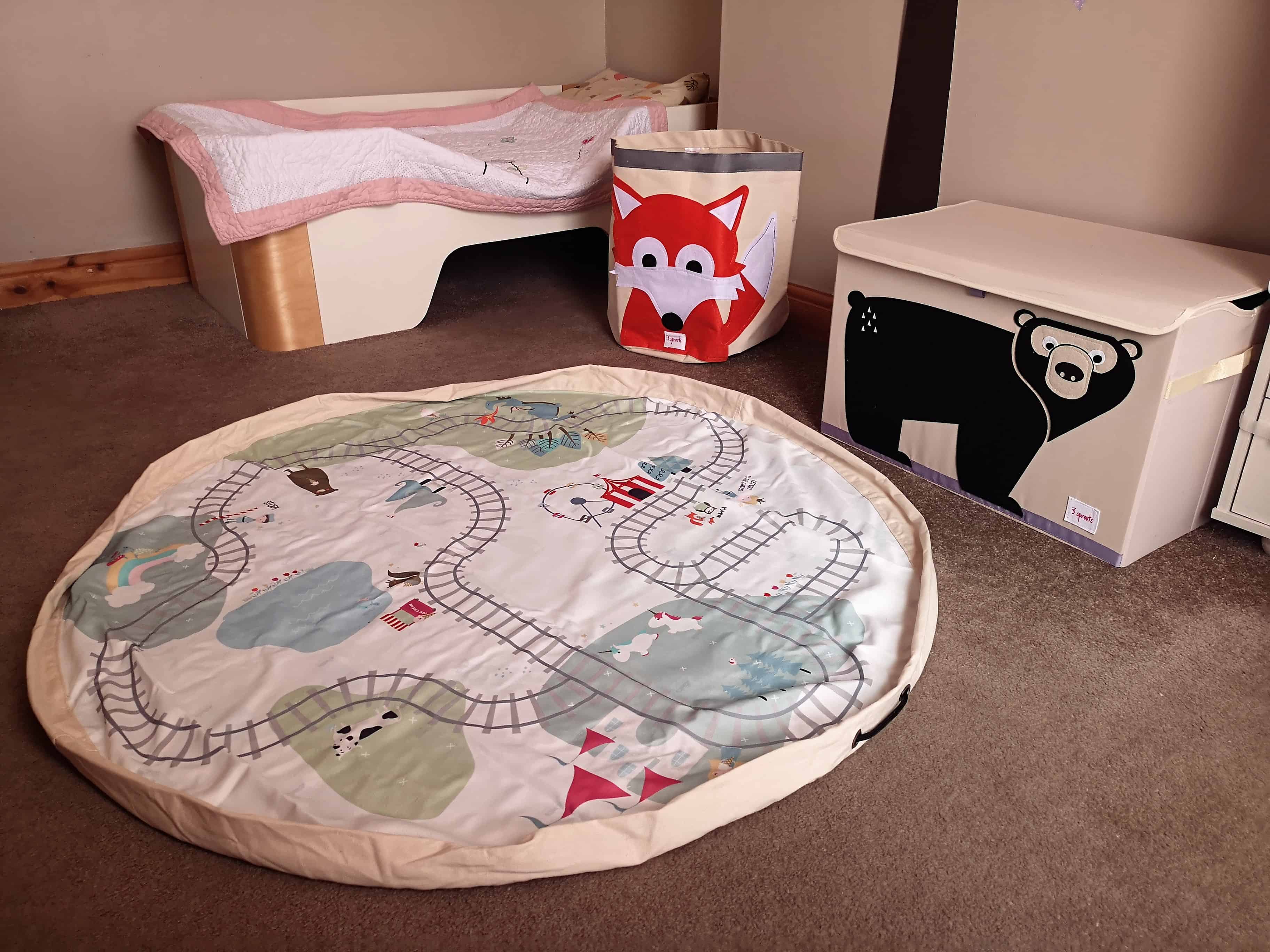 Before Erin was born, and definitely before she actually went into her own room, we tried to get it as ready for her as possible. We’d bought furniture like a wardrobe and IKEA storage in advance and we haven’t really done anything else with it for a long time. I think the only thing that has really changed is swapping a cot for a toddler bed and adding some woodland themed bedding. Recently, we were asked by Hurn and Hurn to pick out some items to help spruce up Erin’s room a little bit.

One brand that immediately stood out to me was 3 Sprouts, who specialise in children’s storage. Erin’s bedroom has a woodland theme but most of the accessories are of things like trees or toadstools. We don’t really have any bigger pieces with animals on apart from Erin’s bedding. The 3 Sprouts range offers storage solutions such as toy chests, storage bags and laundry hampers as well as over the door storage.

I’ll be honest, I spent a lot of time looking over the 3 Sprouts products. Each piece is made from neutral coloured fabric but they have lots of colour elsewhere especially in the large felt animals on the front of each product. Although I was looking for woodland themed items, there are plenty of products with plenty of animals to choose from. After a lot of looking I finally decided on a Fox Storage Bin and a Black Bear Storage Chest. 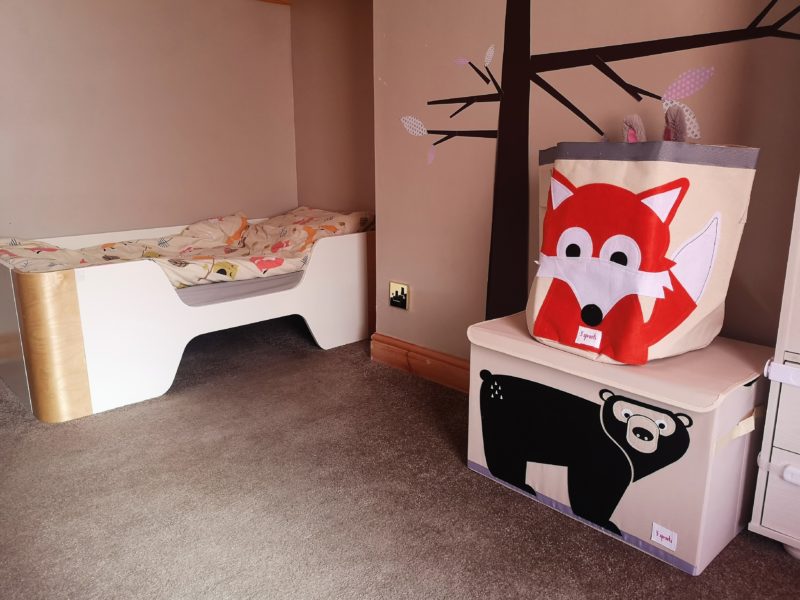 The Black Bear Storage Chest really stands out in Erin’s bedroom and I love how dramatic the design is on the front of the chest. The chest has a soft close lid as well as handy handles on each side. It’s easy to overfill things like this but the handles make it easier and safer to move it around if we need to. 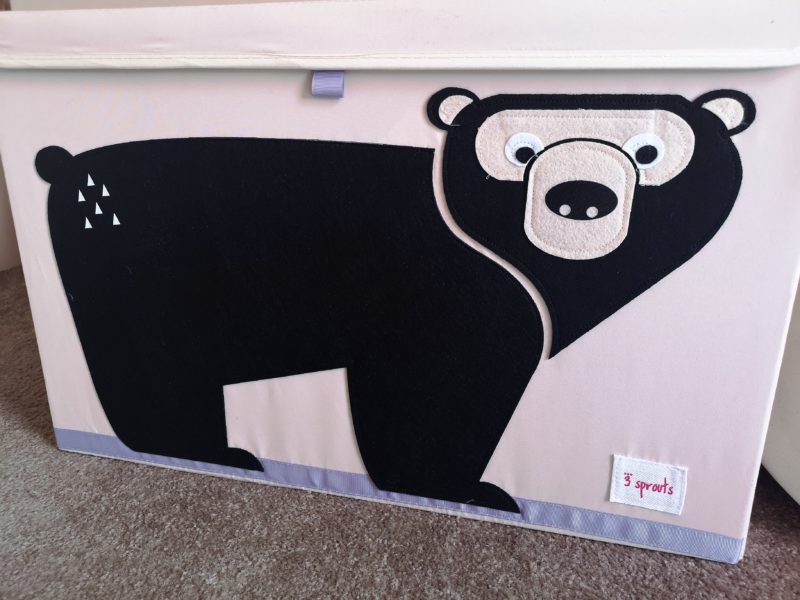 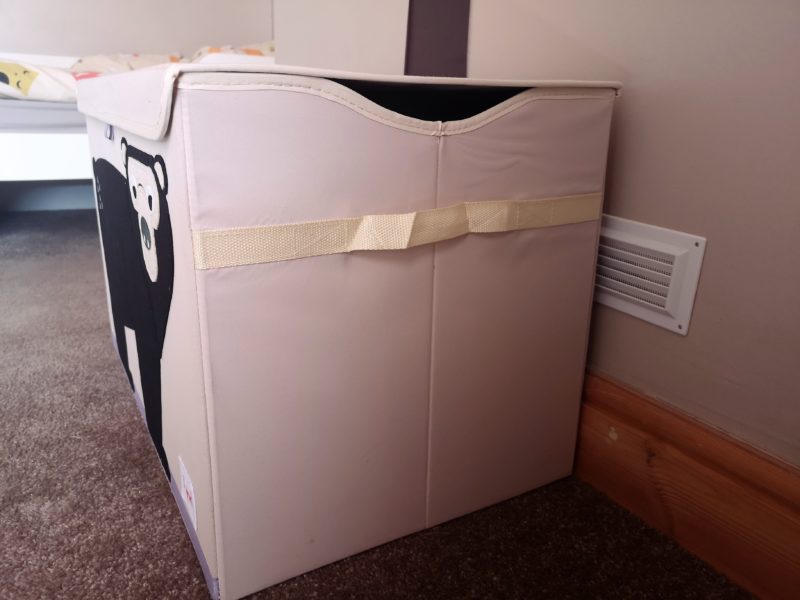 Erin’s room is quite large so the Black Bear Storage Chest fit in nicely without it taking up too much space. Although we have IKEA Kallax storage for things like books and smaller toys, the larger toys end up being left out all of the time as there was no where to put them. I have been able to put so much in this storage chest and there’s still a bit of extra room in there. 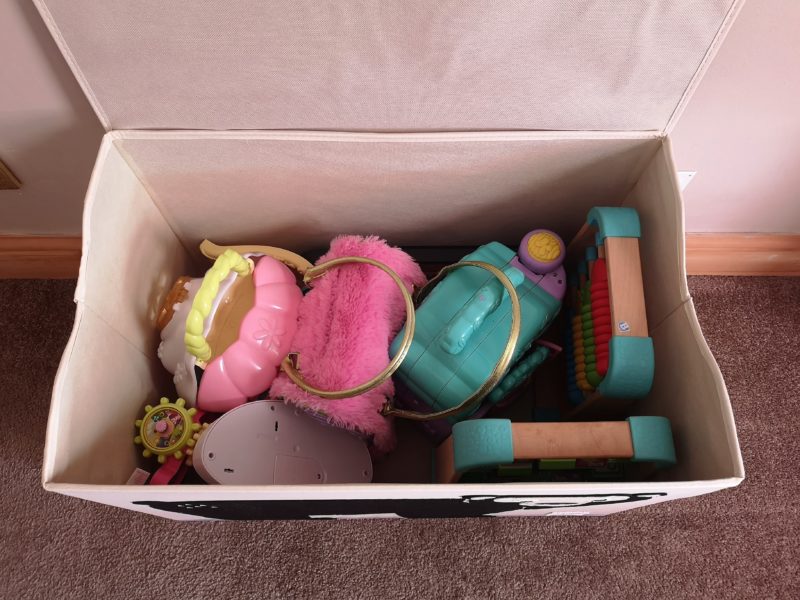 Erin’s room is quite large so the Black Bear Storage Chest fit in nicely without it taking up too much space. Although we have IKEA Kallax storage for things like books and smaller toys, the larger toys end up being left out all of the time as there was no where to put them. I have been able to put so much in this storage chest and there’s still a bit of extra room in there.

I also wanted another piece to match the storage chest so I chose the Fox Storage Bin (Extra Large). We have a few other foxes dotted around the room so this one was quite an easy choice for me. 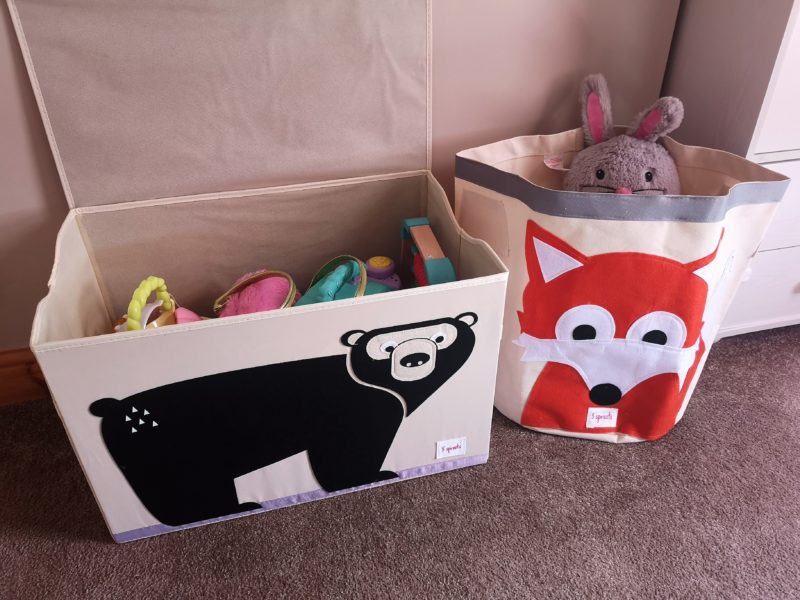 Although I knew the storage bin came in extra large I wasn’t really expecting it to be so big. Of course, that’s not a bad thing though, especially when your child has about a million soft toys! Although a different animal on this product it matches the toy chest so well. The orange fox stands out against the neutral background and it’s such a bright and cheery piece to have in Erin’s bedroom. 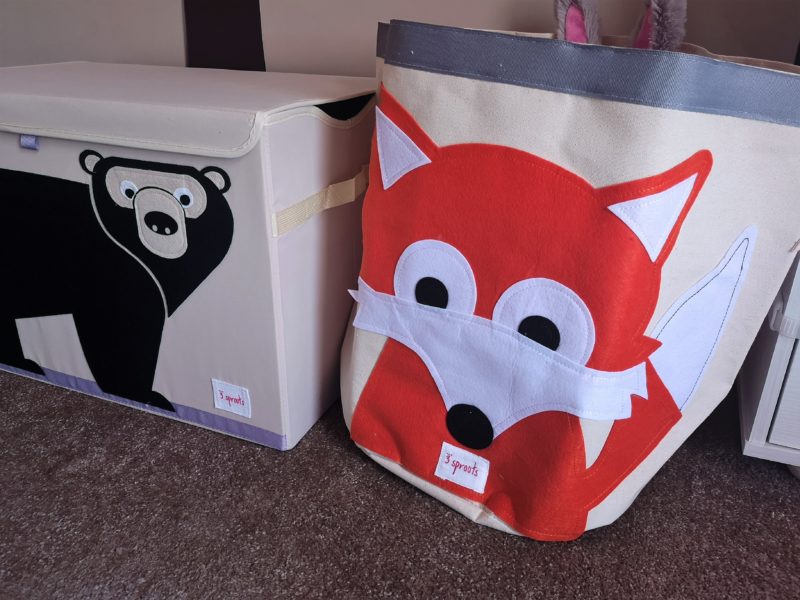 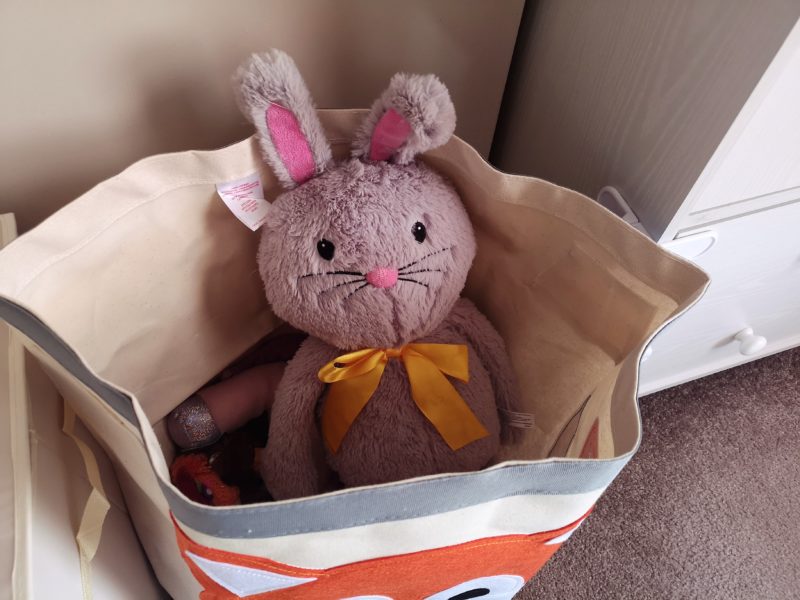 We have been able to fit so much into the Fox Storage Bin and teamed with the Black Bear Storage Chest, it has helped Erin’s bedroom so much. The pieces from 3 Sprouts stand out against the tree wall and they are so useful as well as stylish. I now have my eye on one of the over door storage pieces as well as storage boxes for our Kallax storage so that everything matches.

Erin has quite a lot of floor space in her bedroom and so far, we haven’t really done anything with it. Erin loves to spread out when she plays though and she has a fantastic imagination. While browsing through the ‘children’s room’ category I came across the Play & Go storage bag and play mat. 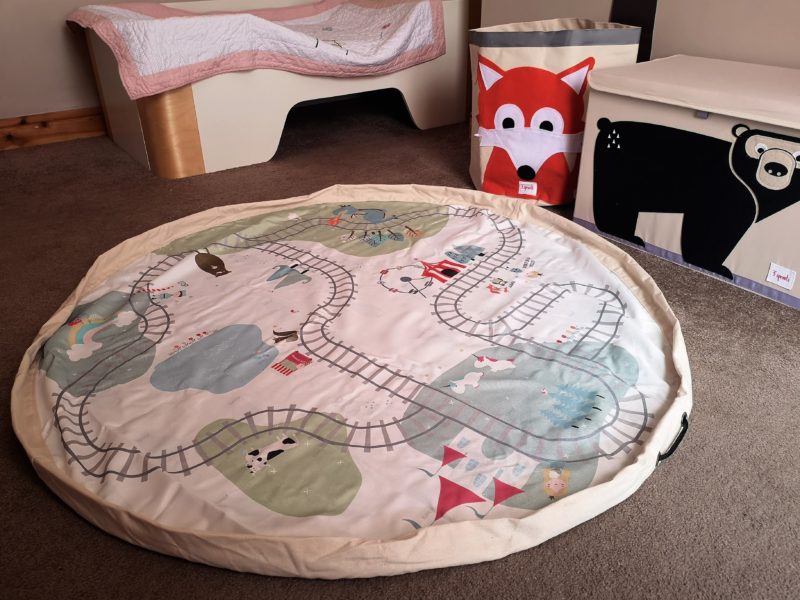 Although not a woodland themed item, I thought it would be something fun and different for Erin. The play mat is pretty big and when opened up it does take up a lot of Erin’s floor. That’s definitely not a bad thing though as it means that Erin can spread out and make the most of the mat. The mat is double sided but one side has a design more suited to being played on. 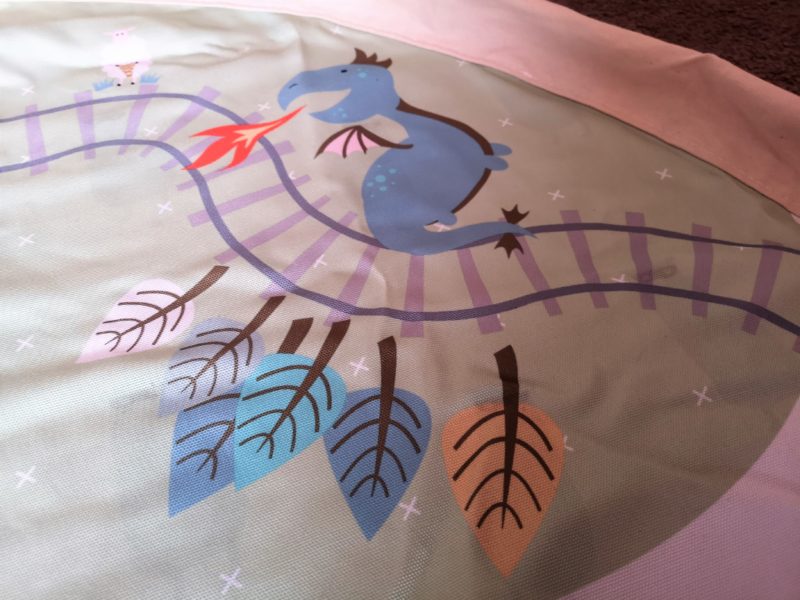 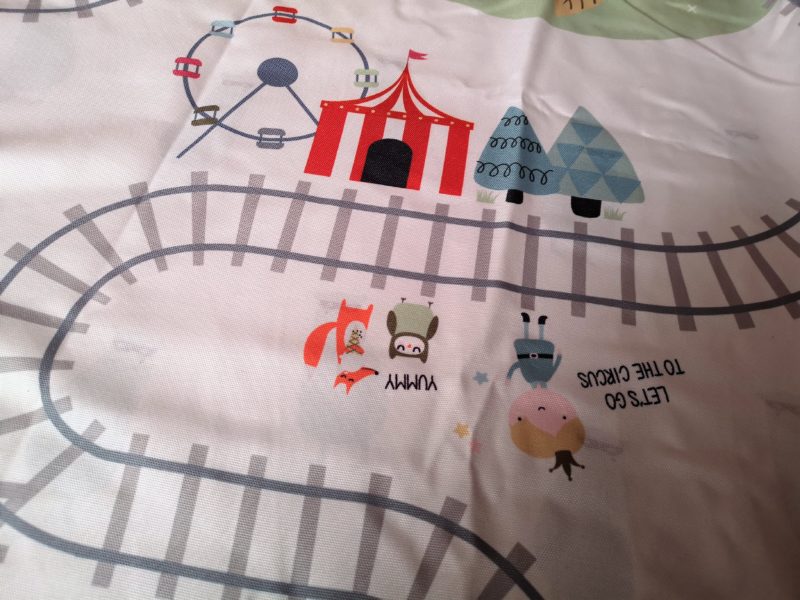 The mat has a train track running all over it stopping at different places and things on the way round. There are things such as a dragon, a castle and even a circus. Although a large portion of the background of the mat is neutral, the splashes of colour and the design make it really eye catching and super fun for children. 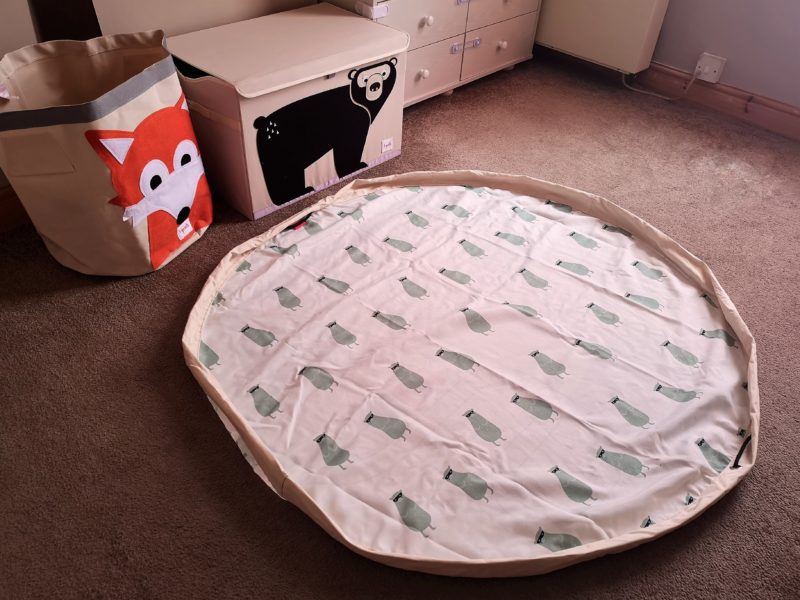 Not only does the Play & Go storage bag and play mat have a super fun side with lots for Erin to do but it’s also reversible. The other side of the mat has a plainer design with green bears wearing sunglasses. Erin much prefers the more playful side so we tend to use the bears as the outside of the mat. 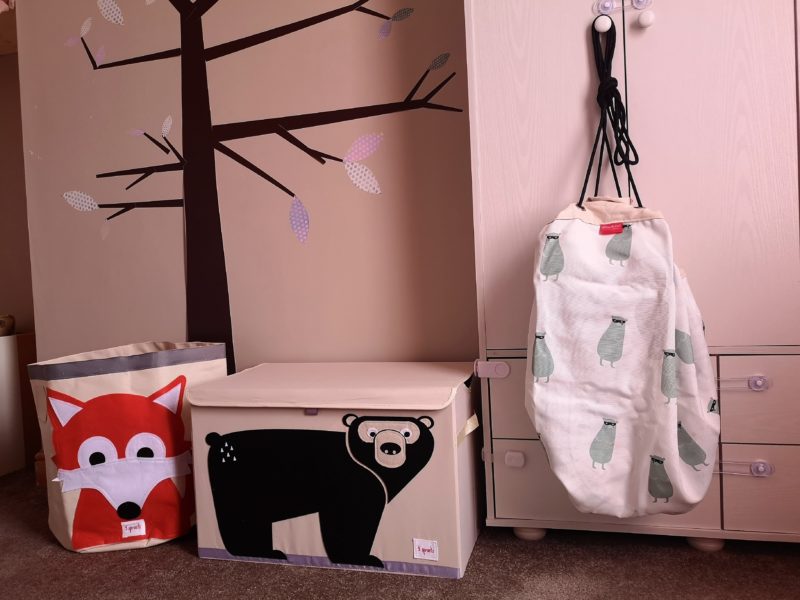 One of the best things about the play mat is that it doubles up as a bag. There are thick strings to pull on either side of the mat which then pulls it all together to make the bag. This is such a good idea for if you’re going on a day out, a trip away or even just taking it out to the garden. Any toys played with on the mat can be kept inside the bag without moving them and it makes it an absolute breeze to tidy up.

The new items from Hurn and Hurn have really helped us to change the way that we use Erin’s bedroom. Before, we wouldn’t play in there too often as we were stuck with smaller toys that didn’t hold Erin’s attention. Now, we have some great storage for larger items and an awesome play mat that we can use anywhere we want! 10 thoughts on “Refreshing Erin’s Bedroom With Hurn And Hurn”