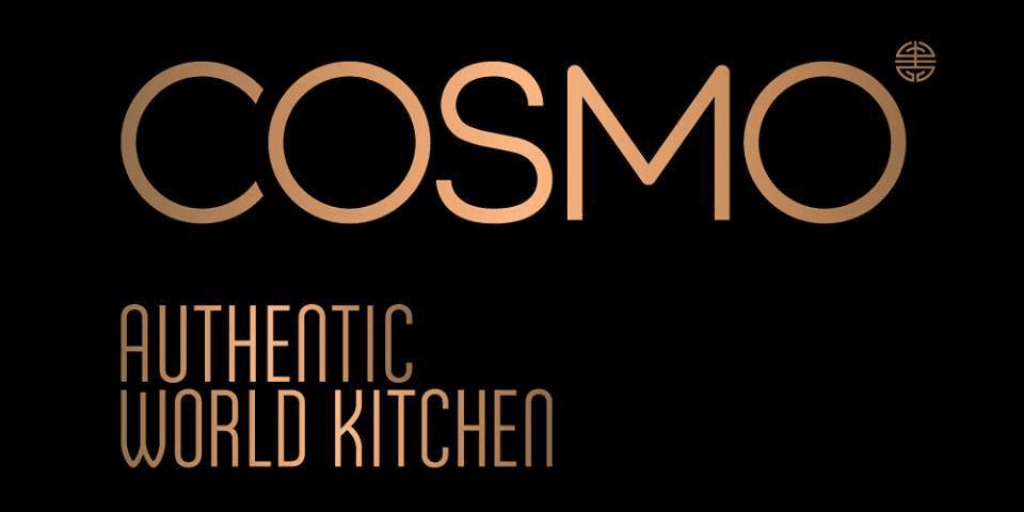 John and I love eating out but now that we have Erin choosing a restaurant isn’t always so easy. Erin doesn’t really do well with restaurants because she hates to be sat still. Anywhere we go she lasts about 2 minutes on her chair before wanting to explore, dance or generally create a bit of madness. Waiting for the food to arrive can turn into an absolute nightmare and John and I end up more stressed out than anything else.

We were recently invited to try COSMO Authentic World Kitchen in Norwich which sounded ideal for families like us. If you haven’t heard of COSMO before there are 19 restaurants around the country with a few more in the process of being opened at the time of writing this post. COSMO is a world buffet where you can choose from over 150 dishes and help yourself to whatever you fancy to eat. Prices vary depending on the day you visit and whether it’s lunch/ dinner.

COSMO is just a short walk away from intu Chapelfield, Castle Mall and roughly a 10 minute walk away from Norwich train station. There is plenty of parking nearby and Norwich has great transport links in case you are a non-driving family like us.

When you arrive at COSMO you are greeted on the ground floor before being shown upstairs. There is both an escalator and a lift so the restaurant is really accessible to everyone. We had Erin’s pushchair with us and was asked if we minded leaving it downstairs. I didn’t mind this at all as Erin didn’t need it and there was someone with it at all times. Of course, I took my handbag upstairs to the restaurant with me but I felt that everything else was completely safe.

Once in the restaurant we were shown to our table. I’d mentioned that we would be a table of 3 with 2 adults and a 3 year old. We had a table set aside in a nice corner which was already set up with both a high chair and normal chair for Erin. Little things like this go a really long way with me because it helps to make my life and our meal so much easier. 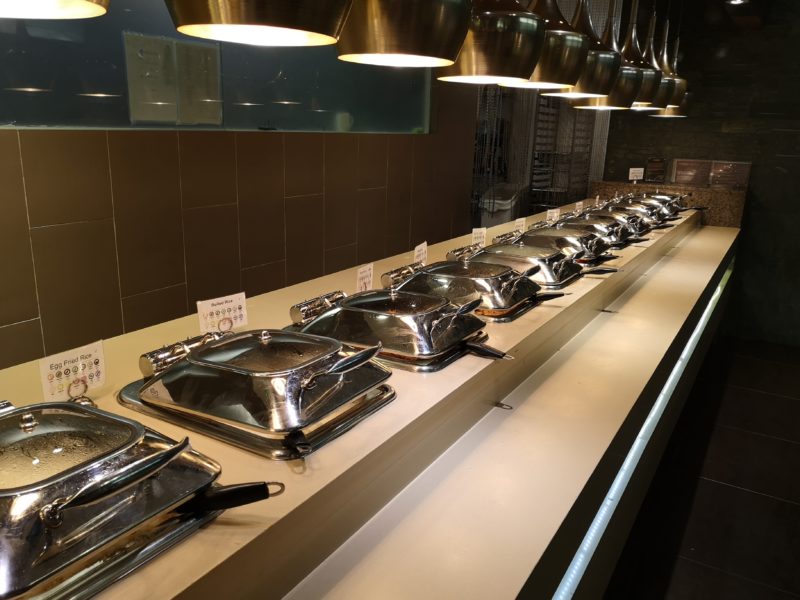 Being a buffet style restaurant means that as soon as you have your table you can go and help yourself to food. This suited Erin really well because she HATES waiting for food to arrive. John took Erin for a walk around to see what she might like and to give ourselves an easier time we said she could have whatever she wanted. Of course, she came back with a plate of cake and an ice cream. 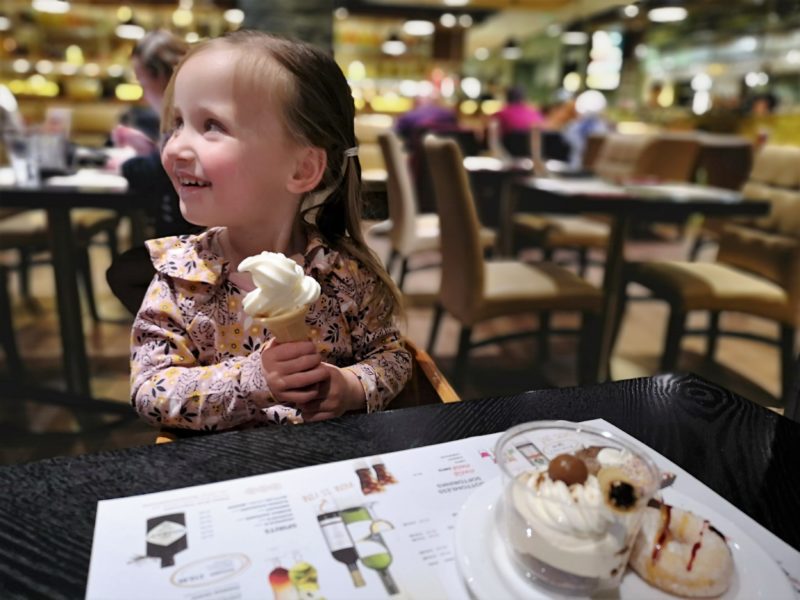 While Erin has happy with her ice cream it meant that John and I could help ourselves to our own food, taking it in turns so someone was always with Erin. The food is set out in different sections and there is so much choice. I think we started at a section closest to us and worked our way around each time we went up.

John and I really enjoyed having such a varied meal. COSMO has so many different dishes on offer so you can have anything from sushi to burgers to a roast dinner! The restaurant is set out into different sections with foods that compliment each other so to start there was a whole range of cold dishes and salads which then moved on to things like burgers, potato wedges and chicken wings etc.

I really like the whole layout of the restaurant because it makes it easy for people to put together really lovely plates of food. John will eat near enough anything and he loved digging in to a bit of all sorts whereas I’m quite a bit pickier with plainer tastes. John and I both found more than enough choice for us both and even as a pickier eater, I could eat a lot! 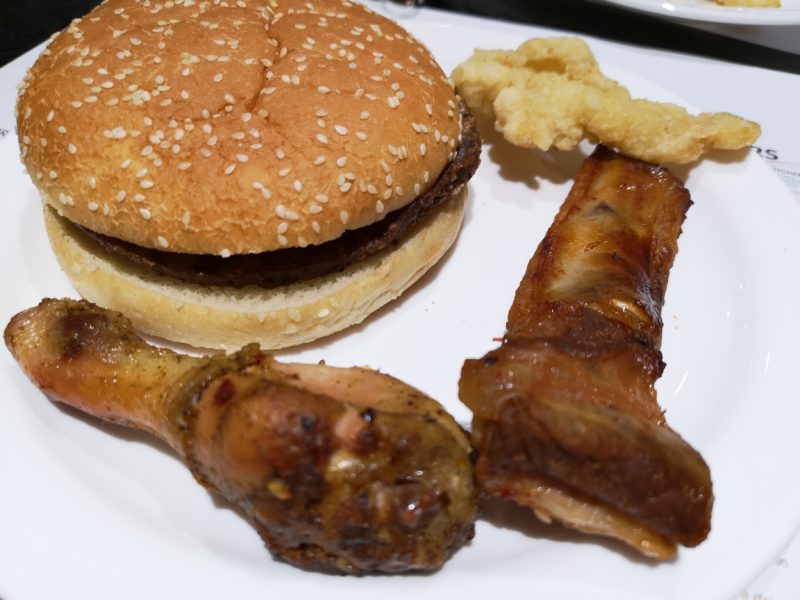 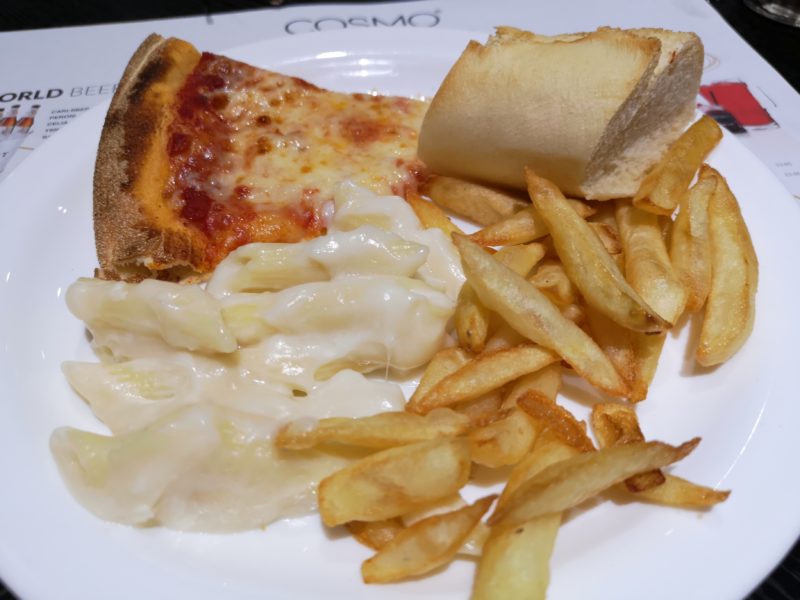 We don’t have takeaways very often any more so things like Indian or Chinese food are a real treat for us. These sections of food were at the back of the restaurant and closest to the desserts so these were the meals we ate last! While John got to have a plate full of smaller portions but a larger variation I got to have a plate of a few things I really liked. 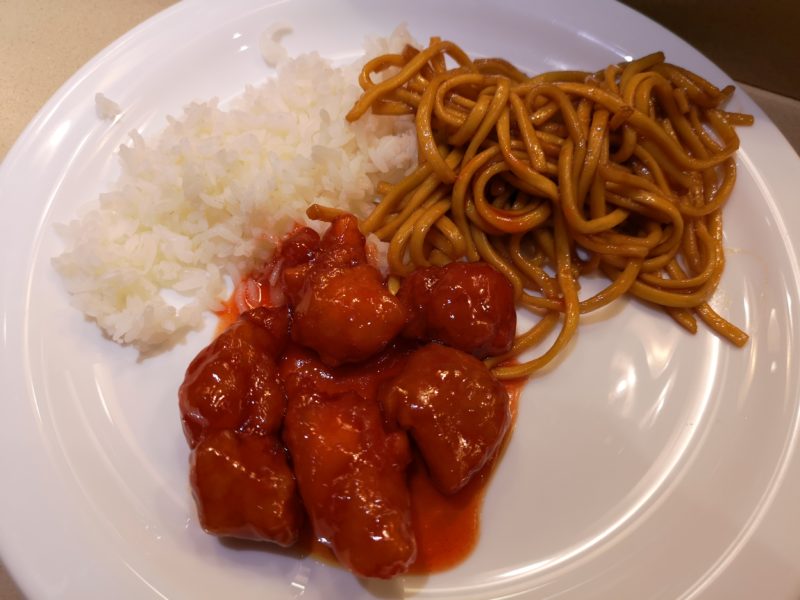 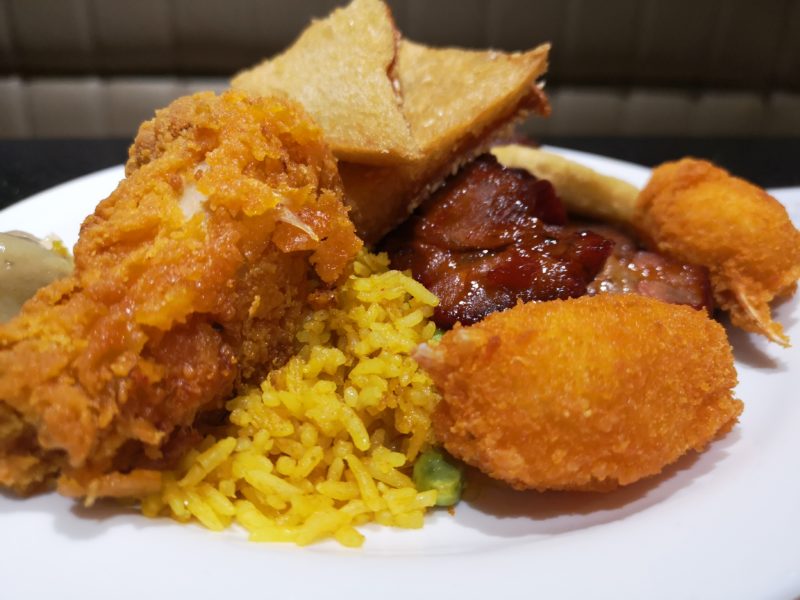 As we visited COSMO at 1pm on a Sunday it was pretty busy. However, there was only 2 sections that I ever saw to be overly busy and these were the carvery and the live cooking station. No matter when we went up to get food there was always every option available and I saw people refilling and checking the food on numerous occasions.

Before our meal John and I had agreed that Erin could have whatever she wanted to eat. Erin is a really fussy eater and asking her to try something new never goes down well. So, we gave Erin the freedom to have what she wanted this time and I was so amazed at her choices. Erin had different breads, carrots and peas, pizza and a whole range of desserts. 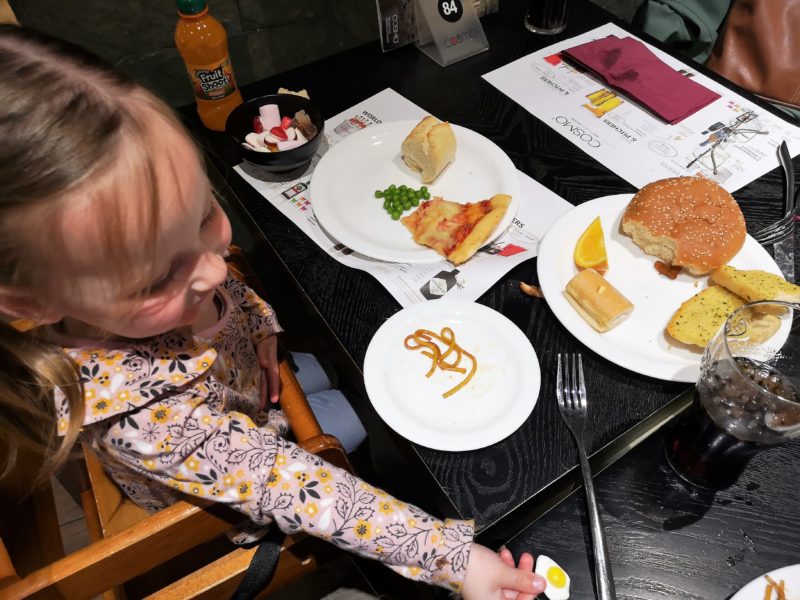 At one point during our meal I had gotten myself some sweet and sour chicken, noodles and rice. As soon as I got back to our table Erin said that she wanted some food like mine and she hasn’t really ever done this before. Erin really wanted to try my noodles so I let her have a few from my plate. This isn’t something Erin has ever eaten before so she didn’t actually know how to eat them but after I showed her, there was no stopping her. 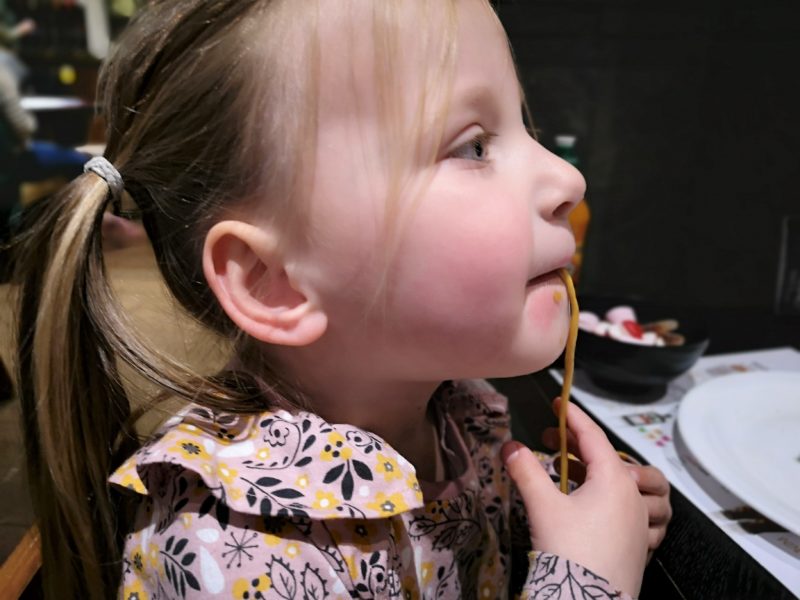 John and I sat and stared at Erin in amazement as she devoured about half a plate of noodles. Being a buffet restaurant where there are so many options seemed to be a great choice for Erin. She was able to try anything she wanted with no pressure at all and she had at least 2 things she’d never eaten before and enjoyed them.

I think we had around 3 plates of food each before we moved on to desserts. Erin had already sampled them by this point but John and I made sure we got some too. There are quite a lot of options and everything looked really delicious. Everything is available in small portions but you are of course free to take as much or as little as you like. 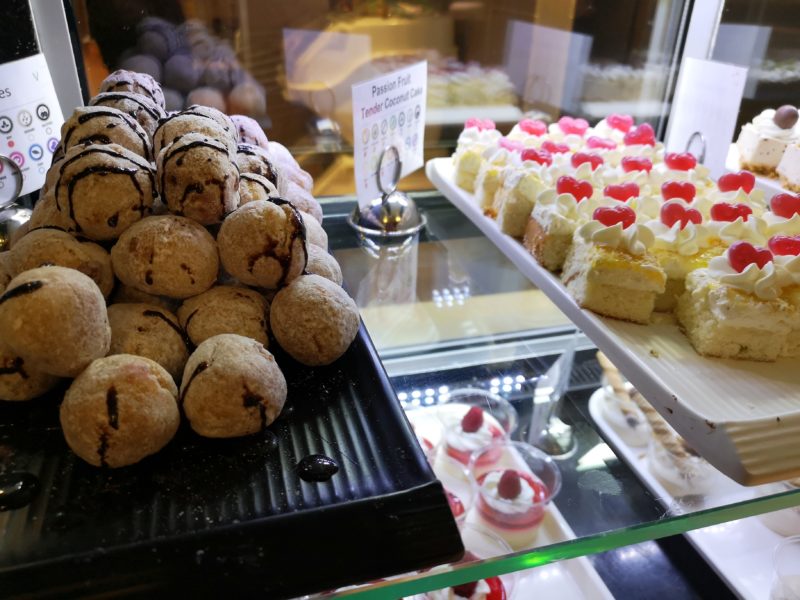 The dessert section offered cakes, mousses, fruit, jelly and doughnut style items as well as a chocolate fountain, soft serve ice cream and individual tubs… just to name a few options! During our visit everything was stocked really nicely and everything was always nearly full. The only thing that was missing sometimes was plates and dishes but it was easy enough to find someone to ask for one. 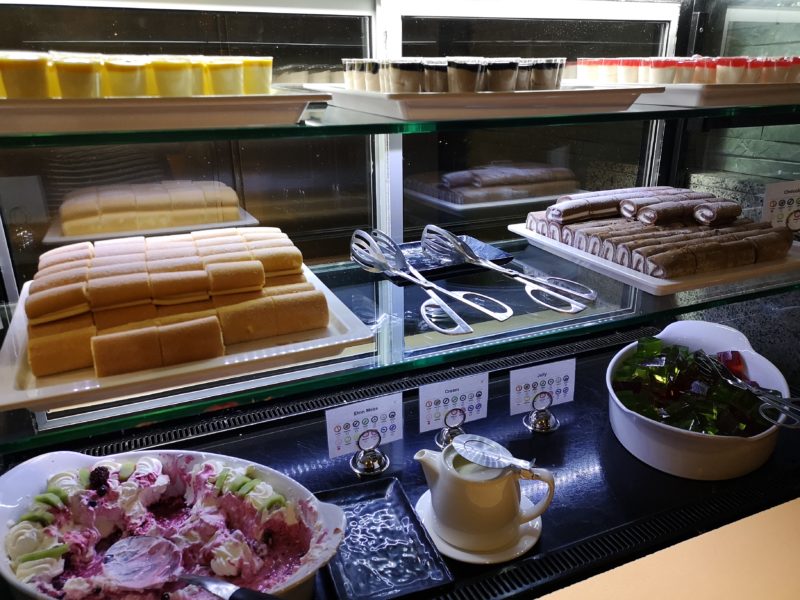 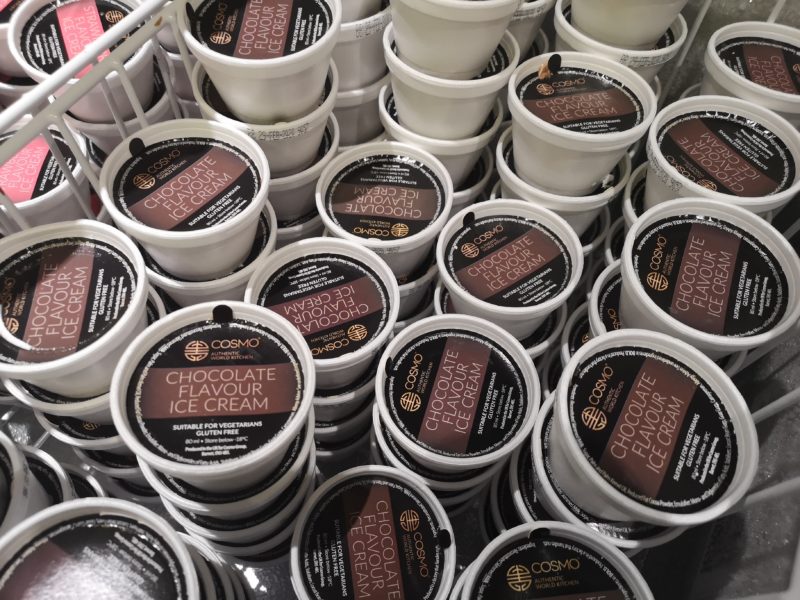 I think that after quite a few large plates of food then the small desserts are a great idea. The portions are just big enough to get a good taste but also allows you not to go too crazy with the sweet treats after a big meal!

Our meal at COSMO Norwich completely changed our way of thinking about eating out with Erin. This meal was an absolute joy and COSMO was such a great place for a picky toddler who can’t sit still. Also, I do have to mention that Erin managed to break a plate during our meal and someone came over immediately to clean up, make sure it was safe and also to give Erin a lolly to make sure she wasn’t worried or sad about what had happened.

We’re definitely going to be making a return visit to COSMO Norwich. 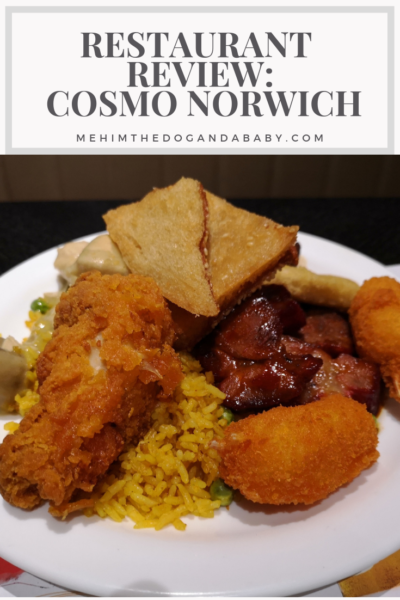