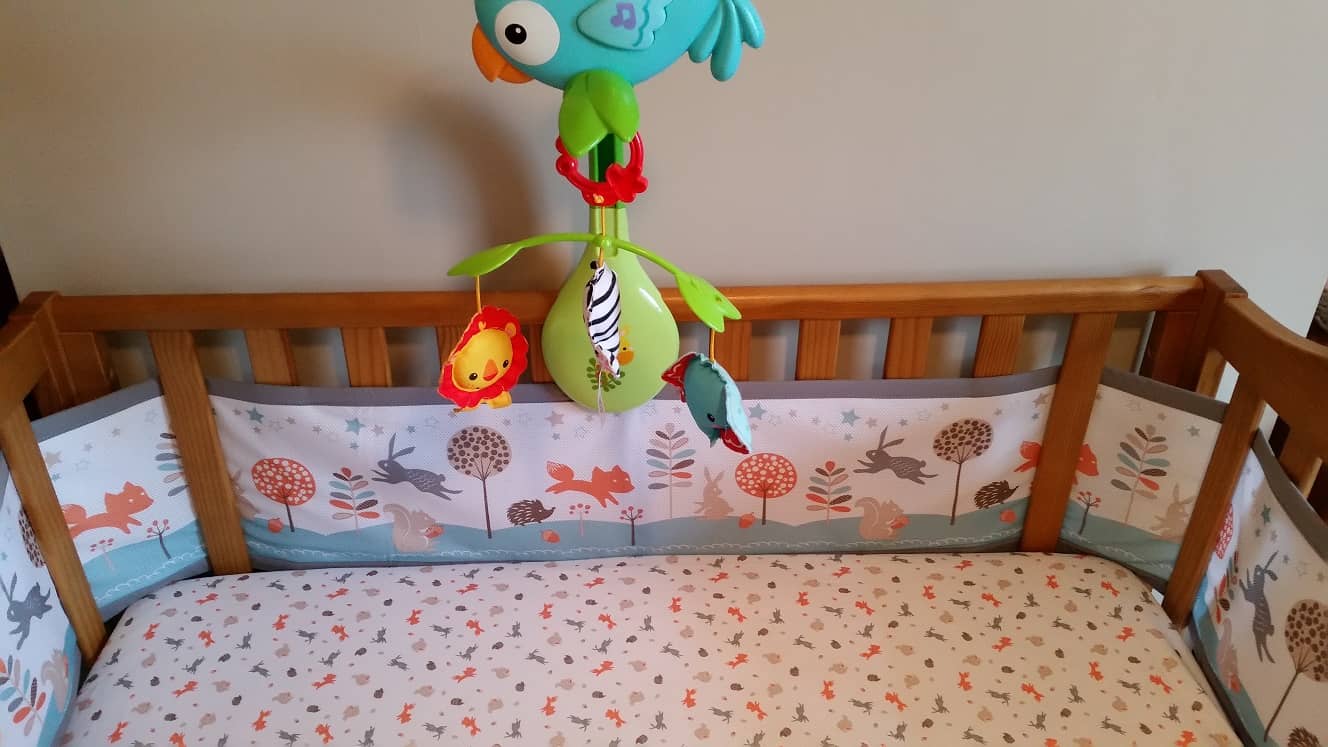 To get Erin ready to move into her own bedroom I got her some new bedding so her cot would be a nice place to sleep. We did already have a cot bumper before but it was such a bad fit that there was no way I could use it. It was never going to be safe and Erin would have been able to pull it down really easily. One of my friends suggested the BreathableBaby company as she knew they did bumper’s that wrapped the whole way around the cot which is what I wanted.

At £23.95 this is not a cheap cot bumper. However, the company boasts that this 4 sided cot bumper will fit standard cots and cot beds, whether they have 4 slatted side or have solid ends. The reason that this bumper should fit all cots is that it comes in two pieces, a long, three sided piece and a short piece for one of the long sides, and is adjustable to fit in different ways. BreathableBaby also sell a 2 sided option for cots with solid ends

Now, the fit is where I had problems and that’s not a good start. The product comes with very clear and detailed instructions for how to fit the bumper. You start with the long piece and then move on to the short piece. There should be enough extra material on each piece to wrap around one slat to secure it. This is where things went terribly wrong and I thought it was because I was attaching it all wrong.

Each piece of the bumper has way too much extra material. It is supposed to be adjustable because of the velcro on the back but there is not enough of it. Instead of wrapping around just one slat and being secure I needed to wrap around three slats! I had to be quite inventive with where the velcro was attached to and I had to pull everything really tightly. Now, my cot is 120x60cm so if you were to purchase this it would be wise to bear that in mind.

The bumper also attaches to the slats on both long sides with additional ribbon ties for additional safety which is a really good feature. Another thing that I really like is that the bumper acts as a sort of cushion on the corners of the cot. The corners end up covered so there is less chance of the child hurting themselves on this area.

I actually ended up having a bit of a melt down in the nursery because I couldn’t figure out what I was doing wrong. Fitting this bumper was an absolute nightmare. It would have been really helpful had there been suggestions for what to do with extra material. Or, the easy solution would just be to have more velcro on the ends so it could be secured a bit easier if needed.

After the whole stress of fitting the bumper I was pretty pleased with it, apart from how awful the ends looked because of the bad fit The design is wonderful and exactly how I wanted it to look. Erin’s nursery is in no way girly and it’s actually painted a sort of brown colour. It’s extremely neutral anyway but does have a woodland theme. This cot bumper is grey, blue, orange and brown and the colours go really well in the room. The bumper has woodland creatures such as rabbits, hedgehogs, squirrels and foxes and also some really pretty trees.
.
The patterned side of the bumper faces in the inside of the cot but there is no pattern on the outside. Instead, the outside is plain white which is a real shame. I wouldn’t be bothered by this normally but seeing as the ends fit so horribly (as you can see in the pictures) it would have looked much better had the design been mirrored.

BreathableBaby products are made from breathable polyester and are designed to help reduce suffocation should the bumper come, or be pulled, down over the child. The small holes in the material are designed to maintain air flow. Should the bumper come down, I would be a lot less worried than I would with the one we had before which was really quite heavy and thick. Obviously I hope this never does come down but at least these things have been thought about.

I’m really in two minds about this cot bumper. While I love the design and the material, the fit is horrendous. I wish this had come in size options (or that I’d measured beforehand). At £23.95 I would expect a better fit or a better way of adjusting the fit if needed. 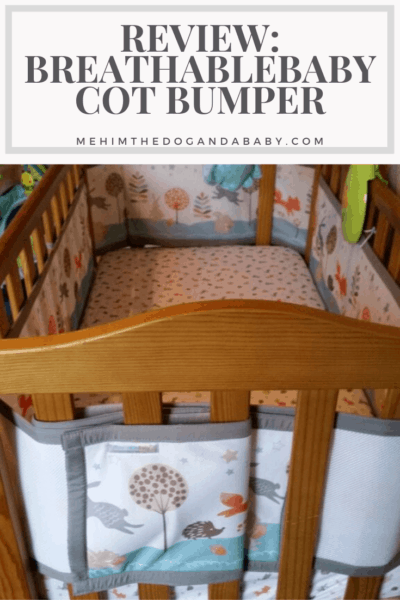