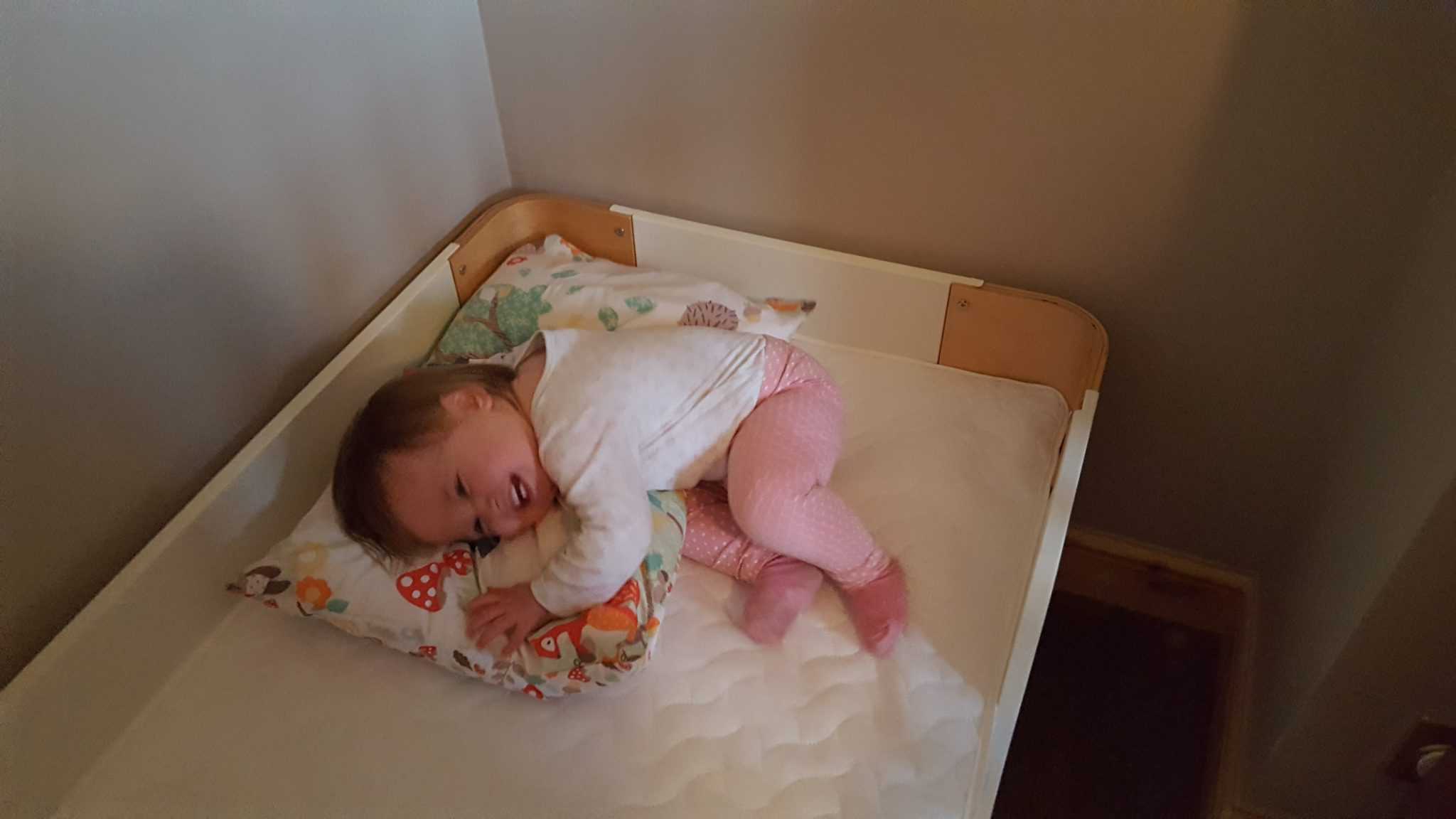 Months and months ago we bought Erin’s toddler bed. I planned on Erin using it nearly as soon as it arrived. I realised though that she wasn’t quite ready at that point in time. She had been going through a rough time when it came to sleeping and was barely sleeping for more than a couple of hours at a time. We were still also co-sleeping kind of and napping together in the day. Last month we started solo napping though and Erin transitioned really well.

We introduced Erin to her bed as soon as it was put together and it has been in her room ever since. I’m glad we did this even though she hasn’t been using it as it’s given her time to get used to it being there.

Before we made the move from cot to toddler bed though I wanted to get a bit of help and advice from other parents who had already done this! Here are 9 Tips To Transition From Cot To Toddler Bed!

I highly recommend a stair gate on the little ones door. If I’d not done that I’d have lost it ha! And perseverance is key; my daughter screamed for almost 2 hours the first night. The next night she took herself to bed and still does every night! Then There Were Three

We moved our son from a cot to a toddler bed when he was 23 months as we were expecting our second baby a month or two later and we didn’t want him to feel “ousted,” by the new baby if we did it any later.

We got a low toddler bed and opted for one with wooden parts at the top to stop them falling out and no bed guard on the bottom part.

If they are an age that they are beginning to understand about characters/animals etc, getting a themed duvet cover can help. Let them help you choose it then move them into the bed with the chosen themed blanket. Independence is a powerful parenting tool. Close Enough To Kiss

We put the bed in the room a couple of weeks before moving our little girl out of the cot. She got used to seeing it in her room and got used to climbing in and out if it. This way moving from cot to bed wasn’t such a big transition. Stressy Mama

Just don’t do it, kids are terrors. Wait until they’re 15 and can be sensible. Accidental Hipster Mum

We did this at 16/17 months and it was fine – just use a bedbar if you have one, or roll up a towel and put it under the fitted sheet to stop them rolling out. Make sure furniture in the room is anchored and there is nothing dangerous for them to touch or play with if they get out. Arthur doesn’t actually get out yet – even now at 2.5 years old so we didn’t need a stairgate on the door but we were prepared to buy one if he didn’t settle. Arthur Wears

We did it a month ago (daughter aged 2). She came with me and chose her new bedding and ‘helped’ put it together. This getting them involved really helps. She said goodbye to the cot too. We let her get really used to her new bed before bedtime came round so it wasn’t a shock in the evening. She got a special lonnngggg story the first night too so she felt safe one of us was there until she fell asleep. Her night light stayed on too. Lots new for them so they may need extra security elsewhere I.e teddy bears, lights, music… Dear Babies

We’re ready to take the leap with Erin thanks to all of these amazing tips. We’ll be sure to keep you updated on how it goes!