Now that we have moved away from purees and are now a bigger mix of real meals and finger foods I needed to change how I cook for Erin. She loves picking up her food and feeding herself now so I know I need to make things she can eat on her own. I thought I would start with mini quiches.

Now, the last time I remember making a quiche was way back in secondary school so we’re talking at least 14 years ago. I did cheat and used a pre-packaged Jus-Rol shortcrust pastry because I definitely wasn’t feeling brave enough to make it myself.

After rolling out the pastry and cutting into circles big enough for a Yorkshire pudding tin I made the mixture. I’m a bit rubbish and forgot to take photos of the in between stages so you’ll just have to imagine!

I whisked up 3 eggs and added 200ml of milk, mixing together. While this was sitting I fried some mushrooms and threw some chopped up spinach into the pan. After a couple of minutes I popped these into the milk and eggs mixture and whisked together, along with quite a lot of cheddar cheese. I don’t ever measure cheese so I just kept going until I thought there was enough.

The oven had already been pre-heated to 190 degrees by this point. I poured the mixture into the pastry cups in the tray, making sure they weren’t completed filled. I then baked for about 20 minutes.

The mixture was way too much for just the 12 mini quiches I had planned on making. I could have easily made another dozen, if not more. However, I chose to make one big quiche as well for John! Not only did I have extra mixture left over but I also had a lot of pastry left over as well. As you’ll see in the picture below, there are some mini cheese and tomato pizzas as well so the pastry didn’t go to waste.

This recipe was so nice and easy and there are loads of different things you could put in mini quiches. I know I’ll be making some more soon! 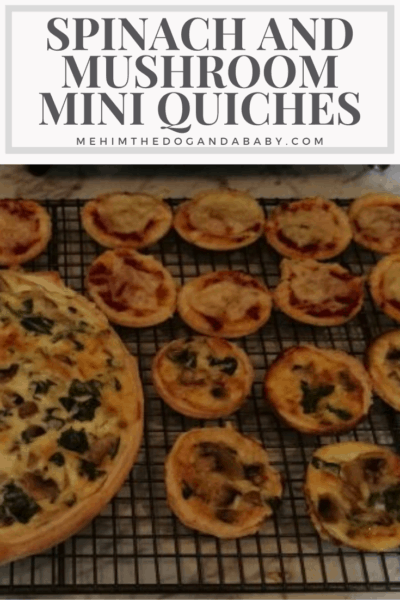