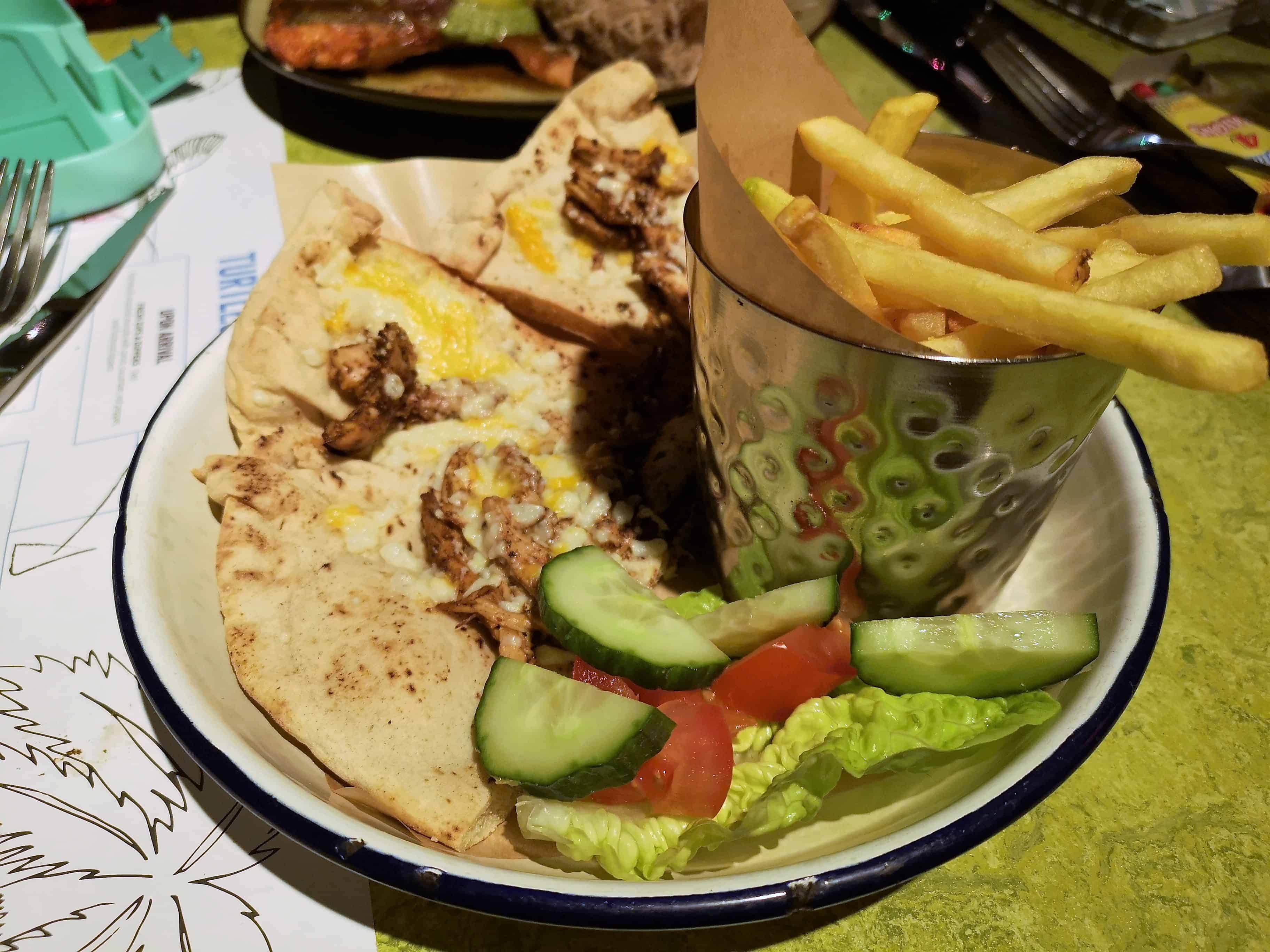 AD | We received a complimentary meal for the purpose of this post.

It’s been quite a while since we managed to get into Norwich for a family day out. John works a lot of Saturdays and Sunday is his swimming day with Erin so that doesn’t leave us with a whole lot of time. We were determined to get out before Christmas though so last Friday we headed into the city to watch a screening of Zog and some lunch. Somewhere we hadn’t been to for a while is Turtle Bay and they now have a new children’s menu so we couldn’t wait to see what Erin thought of it.

We were kindly given a complimentary 3 course meal for myself and John with the choice of anything from the children’s menu for Erin, along with drinks.

For starters John opted for the Jerk Ribs while I had something a little bit different. I asked if I could have the cheese flatbread from the children’s menu as a starter and there was no issues whatsoever with this. While John loves the spice and heat in his food I like much plainer options so this suited me a lot better. There is a Garlic Flatbread on the starter menu but this comes with chilli and can’t be done without as I’d already asked this. 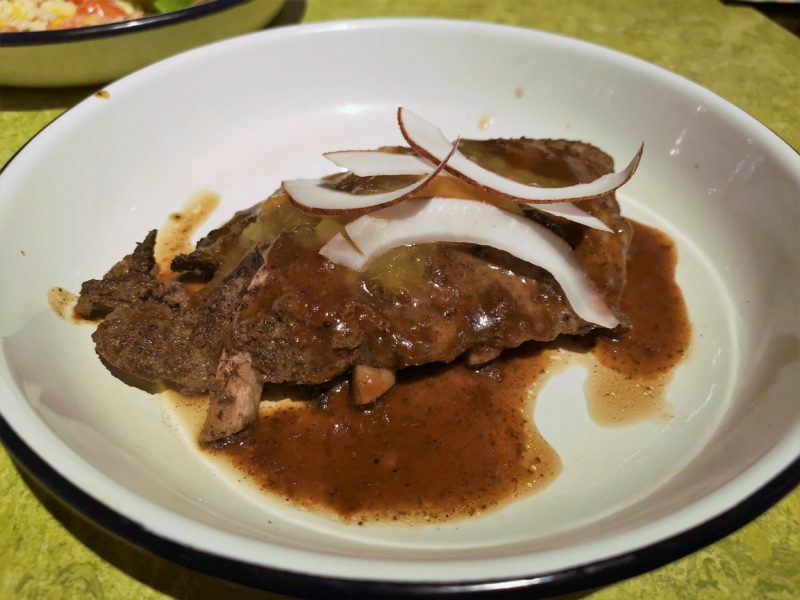 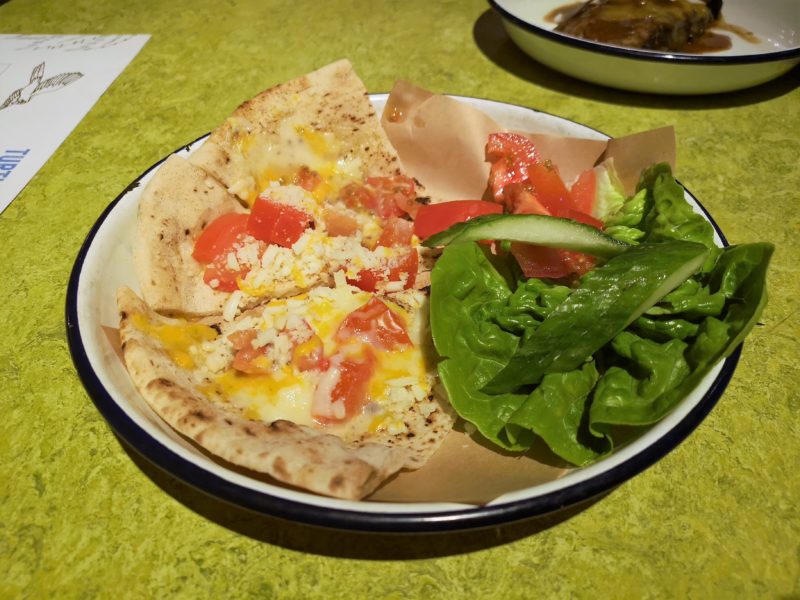 We unfortunately had quite a long wait from arriving at the restaurant to our starters arriving. We had ordered after only about 15 minutes but we were then waiting roughly 30-40 minutes for our starters to arrive. This was quite a bit longer than I would have liked especially as Erin was with us. She was getting very bored and very hungry quickly so I had to break out my emergency stash of food to keep her happy.

Even though we had a long wait the starters were really lovely and just enough before our main. Sometimes starters can be huge and leave you feeling full before you’ve gotten your main meal but that wasn’t the case here.

John loves it when we go out for a meal somewhere as he gets the chance to have something that we would never cook at home and usually his first choice is always fish. Where John took a while to choose his starter that wasn’t the case for his main. John very quickly and easily chose the Jerk Salmon which came with rice and peas. There wasn’t a scrap of John’s meal left when he was done but he said he could have done with a bit more heat in his food and next time he would choose something with Scotch bonnet in it. However, the salmon and rice were delicious and went really well together. 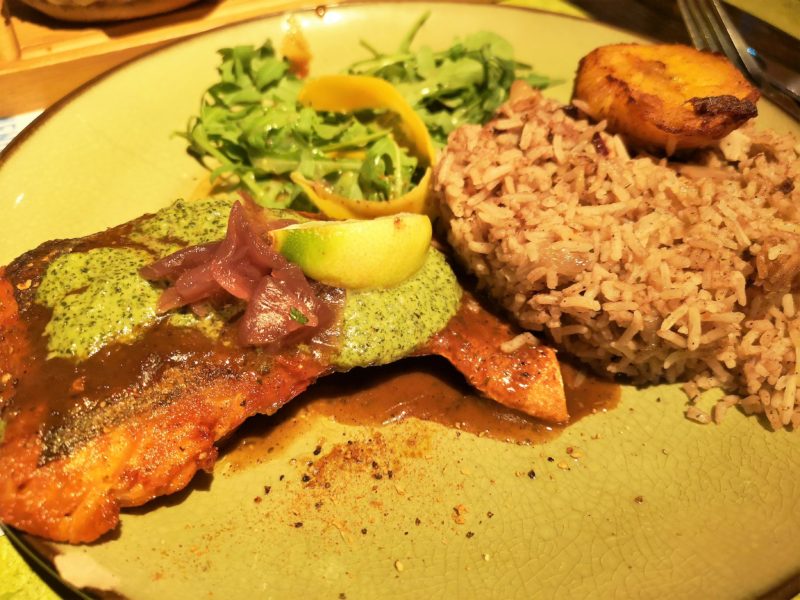 Being a bit picky and wanting something much plainer I opted for the Street Burger with Sweet Potato Fries. I’m going to be honest here and say that this is probably one of the least exciting options on the menu but if like us, you have someone who likes hotter foods and someone who doesn’t, it’s a nice compromise. My burger was cooked perfectly for me, with no pink to be seen, and it was really juicy! 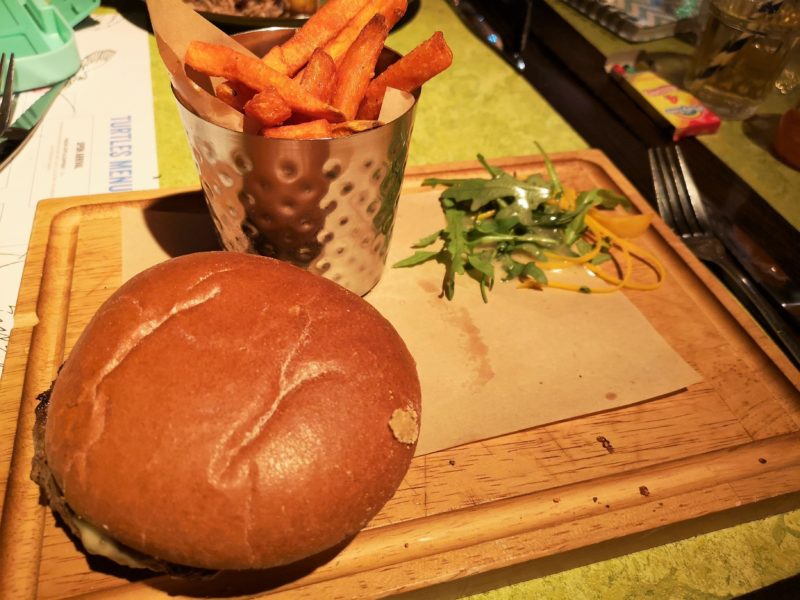 John and I really enjoyed our mains and even though we were getting pretty full at this point, we knew we wanted to try a dessert as well!

Something I usually hate about eating out with Erin is the choice on children’s menus. There aren’t a lot of restaurants that understand that a 3 year old has very different needs and abilities with food compared to an 11 year old. Turtle Bay’s children’s menu is split into Tiny Turtles and Bigger Turtles and it’s so nice to see that there are various sized meals available.

Children are supposed to get dips and dippers on arrival but for some reason Erin didn’t get any. Honestly though, it wasn’t a big deal for us as I know Erin probably wouldn’t have bothered with it anyway. For most families with children this would be a great way to keep the children occupied a bit while they waited for other food.

Being quite a picky 2 year old I chose the Flatbread Pizza with Chicken and Cheese for Erin as this was the closest to something she might eat at home. You get a choice of sides with the children’s meals so Erin had regular fries. On the Little Turtles menu there are also choices like wraps, burgers and chicken with 7 sides to choose from. 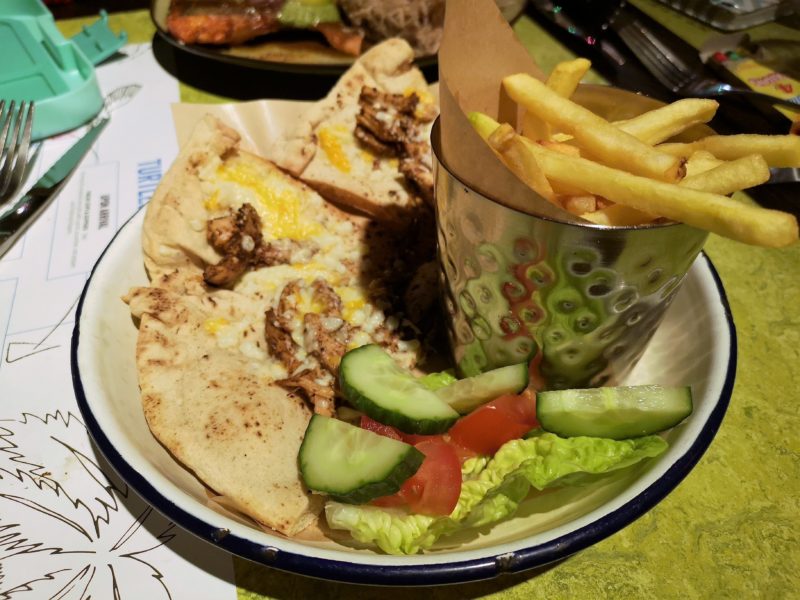 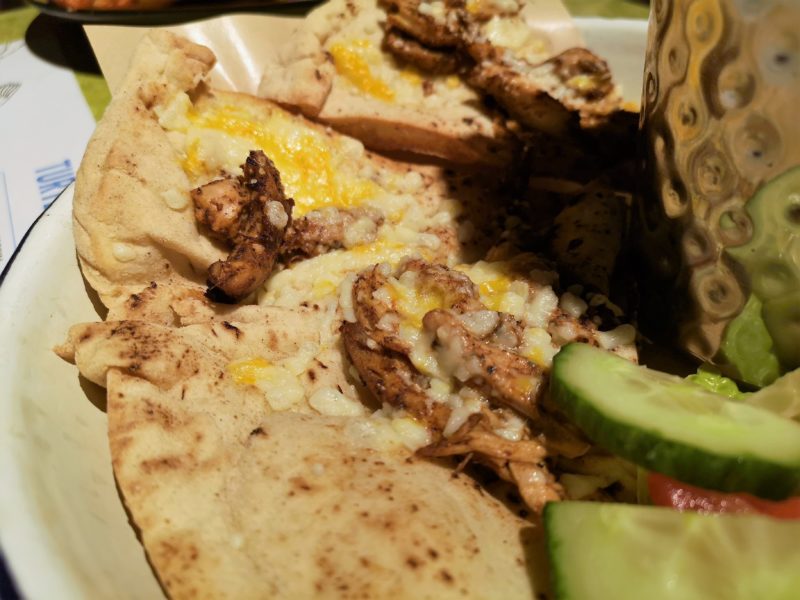 The flatbread was loaded with chicken but I think there could have been a bit more cheese to even things out. There was quite a lot of the flatbread that had nothing on it at all which was a bit of a shame. However, the portion size was really good and nice for smaller children or those with maybe a bit of a smaller appetite.

Turtle Bay’s dessert menu is really pretty great. Instead of there being the same old boring choices you see in a lot of restaurants I think this one is really very varied. Something that John wouldn’t ever have anywhere else is the Caymanas Upside Down Rum Cake. He didn’t even really know what it was when he ordered it but said it was warming, very strong flavour of rum and he would definitely order it again. 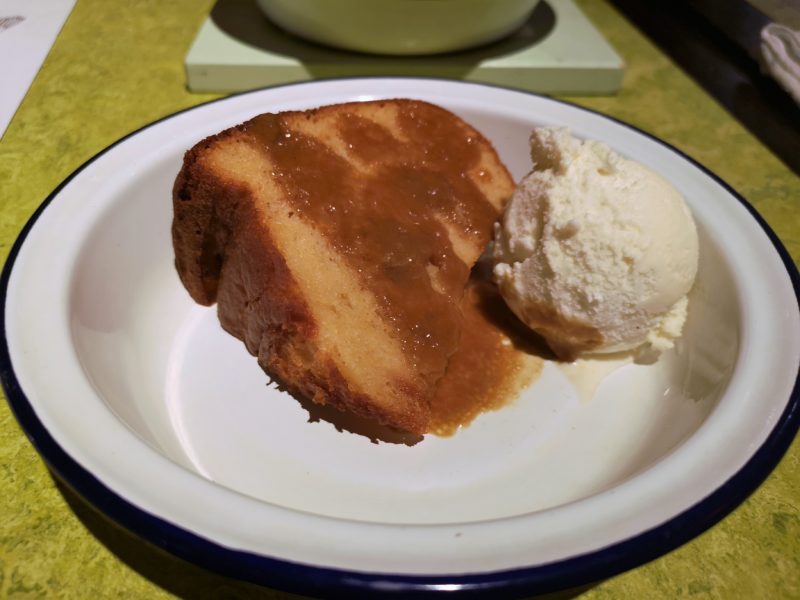 While John chose something he had no idea if he would like, I did the complete opposite and picked something I knew I would love. I have had the Banana and Toffee Cheesecake before so I didn’t even need to look at the menu to know that this is what I wanted. This cheesecake is exactly what I wanted after quite a heavy meal because it’s fruity, sweet and light all at the same time. 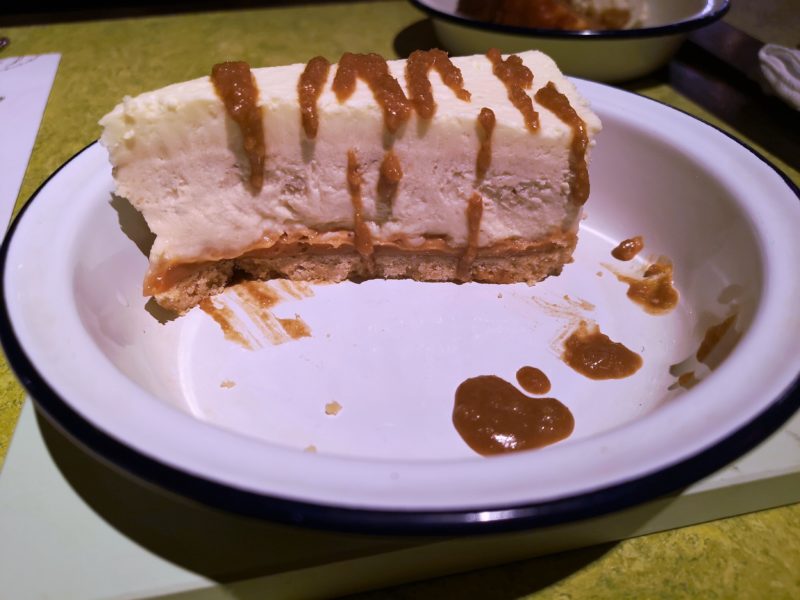 Erin was more than a little bit excited to get a choice of pudding as well. For children there is a choice of tropical fruits, salted caramel fudge brownie or ice cream. Erin’s choice was very easily Vanilla and Light Chocolate Ice Cream but I was really happy to see healthier options such as fruit on the menu. 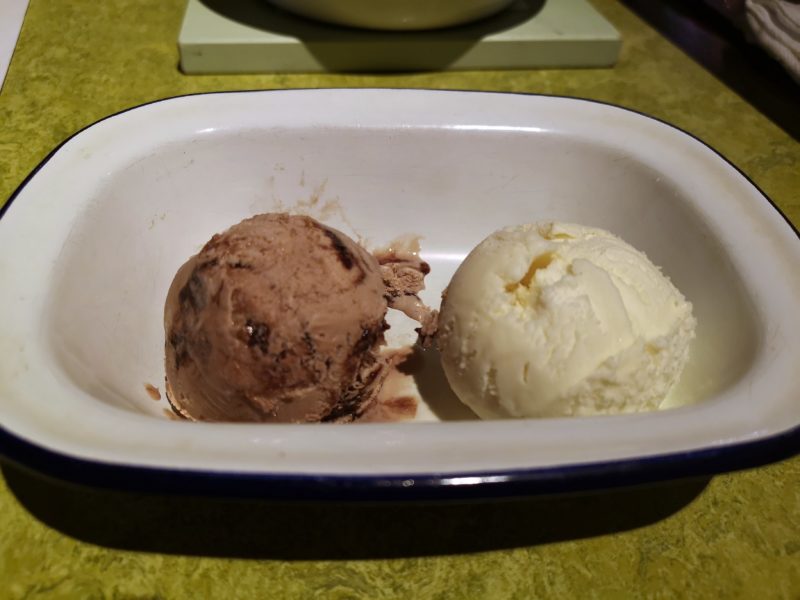 We visited the Friday before Christmas at 1pm and the restaurant was really quite busy and they had a large party in as well. Although we had quite a wait for our starters this was the only issue we had. Our mains came out quickly after we had finished our starters and they were really fresh and hot. Erin loved dancing to the music playing and she had so much fun between each course. We had such a fun time and had an absolutely delicious meal. The children’s menu was especially impressive as the choices really suited different ages and tastes.

Take a look at the Turtle Bay menu here: http://www.turtlebay.co.uk/food-drink/ 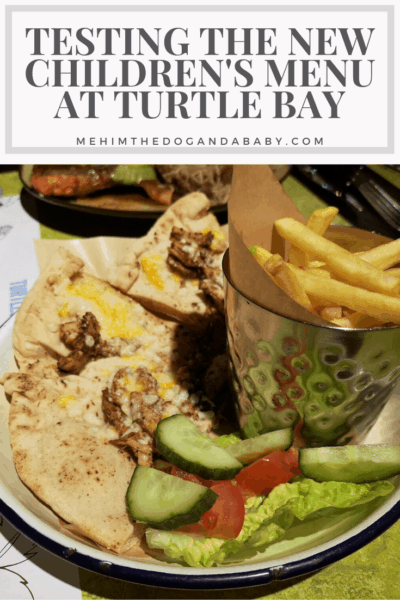