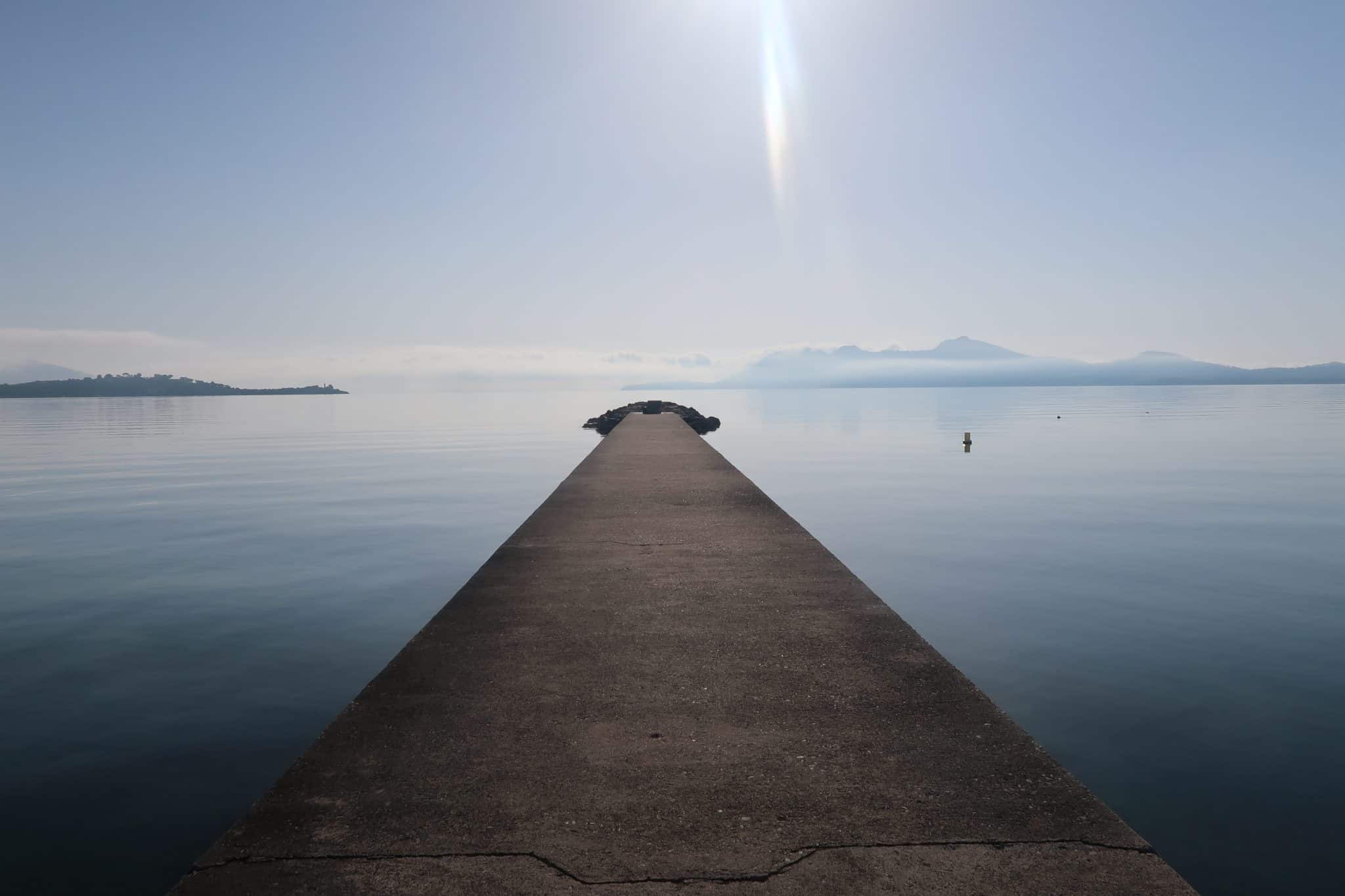 At the age of 32 I had never been on an all inclusive holiday. I don’t know why but they had never really appealed to me before. I went through a crazy drinking phase before I was even legal to drink so by the time I was going on holidays I wasn’t interested in going somewhere to drink my money’s worth. When we booked our recent holiday to Majorca I wanted to not have to think about much while we were there so we splashed out and went all inclusive. However, I really didn’t know what to expect when we got there and I couldn’t find much information online so I thought I’d write something for other people looking to do the same.

Obviously, this post only covers our stay at the FERGUS Style Pollensa Park SPA Hotel, Majorca but it may give you an idea of what you can expect or things to ask before booking your own holiday.

In my head, my idea of all inclusive was something like an all you can eat buffet restaurant. I don’t know why this is what I thought but I did. I thought that there might be different stations with different cuisine options like pizza, pasta, Chinese food, salad, etc. I thought there might be options for children. Now, this might certainly be the case in different holiday resorts but it wasn’t what we got at the FERGUS Style Pollensa Park SPA Hotel.

Breakfast was very varied but well-suited to British guests. It was possibly to make up a ‘Full English’ breakfast with items like sausages, eggs cooked in different ways, bacon, beans and hash browns. You could also have so many different types of bread with cold meats and cheeses or you could have as much fresh fruit as you wanted. There were gluten free options as well as cereal and what I like to call breakfast cake.

I think breakfast was maybe the meal I enjoyed the most because it was more suited for me and Erin and there was enough for both of us to eat. Erin was happy with toast, bread and cheese along with some biscuits most mornings while I tended to stick with hash browns, beans and toast and of course, cakes! John was super happy with breakfast, especially when he realised he could get omelettes made up freshly at one of the live cooking stations. Breakfast was served between 7am and 10am.

Lunch at our hotel was served between 1pm and 3pm and this was a bit of a strange time for us. Erin tended to nap from about 11:30 so sometimes we’d find ourselves having lunch quite late or separately if Erin was still asleep. The lunch and dinner menus were posted outside the restaurant each morning so we always knew what we would have to choose from beforehand. Here’s an example of the lunch menu: 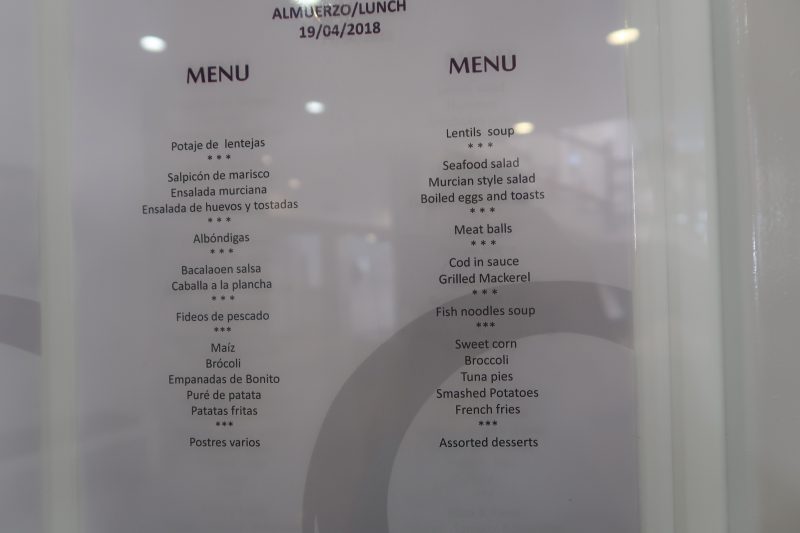 The food at our particular hotel was very Mediterranean themed and honestly, I struggled. Now, this is because I am the pickiest eater but John LOVED the food. With him being a big fan of fish and it not being something we have often at home he was in food heaven. Every lunch time John would try whatever fish was on offer, along with some of the other options.

Every day there was a whole table filled with different breads and so many different salad options from potatoes to rice and cous cous. . There was fish on offer every day but not always something meaty. There would also be a pizza station each day and they would serve 4 different flavours. There was also a live cooking station for pasta and when they had a white sauce, I always had this because it was really lovely!

Erin never ate much at lunch but would almost certainly try some cake or have some bread. Apart from the fact that there was pizza and chips or potato wedges each lunch time there wasn’t really much that Erin would actually eat. She is a bit of a picky eater and with everything being different and new she wasn’t really up to trying anything new. Still, it would have been nice if there had been a few more child friendly options to choose from.

Like at breakfast, there was a huge range of fresh fruit to choose from as well as cakes, ice creams and pastries.

Dinner at our hotel was served between 6pm and 9pm. Again, for us this was a bit of a strange time because of when Erin slept. She was always pretty exhausted at 6pm, nearly ready for bed and struggled to get through dinner. This meant us having to eat quite quickly most evenings so that she wouldn’t get grumpy and overtired. Here’s an example of a dinner menu: 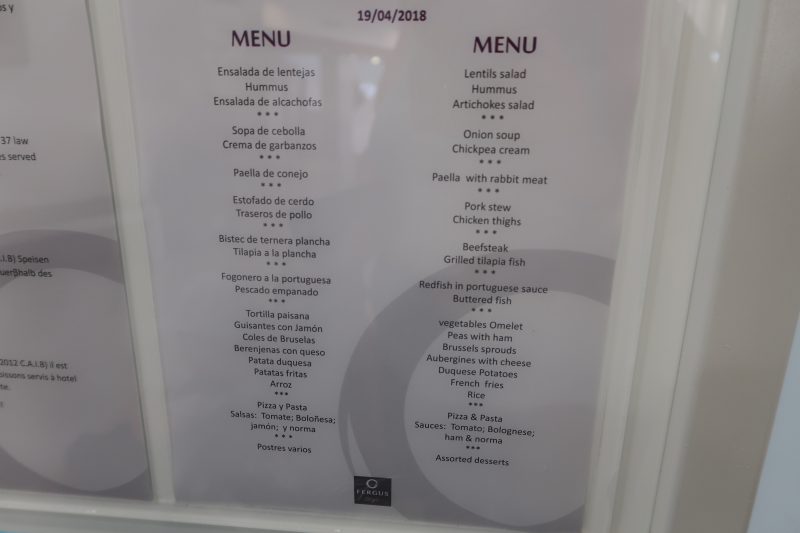 I wouldn’t particularly say that there was more choice at dinner compared to lunch but it was a bit more varied I think. Again, there would always be at least 1 fish option but this time there was meat as well. Some of these were available from the live cooking stations and some was pre-cooked. Just like lunch there was pizza available with a live cooking pasta station. Sometimes the sauces would change but a lot of the time they would stay the same as they were at lunch. This wasn’t an issue for me though because it meant definitely having something I would like on those days! Chips were always available at dinner but yet again, not much else for children who weren’t too adventurous with food.

As you’ll see from the pictures below, there was also a lot of cold food available like breads, cheese and meats along with salad and cold pasta.

As the meals were at set times there was also snacks available for all inclusive users between 10:30am and 4:30pm and these were available near the pool bar. We didn’t really eat too much of this because we either wasn’t hungry or we were busy doing other things. However, it was nice that there was something available during these times and it meant not having to go in to the restaurant for lunch if you wanted to stay by the pool.

There would always be things like ready made sandwiches or croissants to choose from, cakes and pastries, salad and also hot food as well. The hot food consisted of things like hot dogs, burgers chips etc. and really, was a bit more suited to children. I really wish we’d been able to have some of these things inside the restaurant because not only would Erin have been better off but so would I!

I know that the drinks on all inclusive packages can really vary depending on where you’re staying so I think that’s worth looking into closely before you book. At our hotel all soft drinks were included as long as things like Coca Cola wasn’t in a bottle/ can. The restaurant had a machine where you could help yourself to soft drinks and fruit juices so this made life really easy for us as we didn’t have to wait around to be served. Certain beers were included but again, none that were bottled. Wine was also included at meal times and during the day. At meals you were able to just go and help yourself to a bottle and they had various sizes available although really, the options were just 1 red, 1 white and 1 rose.

During the day we got any drinks from the pool bar. Erin was happy to drink as much pineapple juice as she wanted and we could also have bottles of water, soft drinks and beers. All of the drinks were served in plastic cups for safety reasons but this wasn’t an issue for us. All inclusive did not include cocktails at this hotel apart from 1 each day which was a special (with a non-alcoholic version available too). John and I aren’t big drinkers so beer was the most we ever asked for.

While it was nice to not have to worry about buying drinks most of the time we weren’t allowed to take any up to our rooms so we had to buy some at the local shop each day. As we had Erin with us and pretty much stayed in our hotel room after 7pm with her asleep this was quite annoying.

While Erin and I didn’t do too well with the choice of food from our all inclusive holiday, John absolutely loved it and probably made the most of it for all three of us. I might not have loved the food in this resort but there’s nothing to say that the next one won’t suit us perfectly. Going all inclusive can restrict your holiday somewhat if you don’t want to pay for any extra meals as it means having be back at the hotel for meal times. We didn’t really mind this though, we just wished dinner was a bit earlier but that isn’t a massive deal.

I think you really have to weigh up the kinds of things you want from your holiday before choosing all inclusive as it won’t work for everyone. I might not have loved it but it made everything much easier for us and I would definitely book this way again.