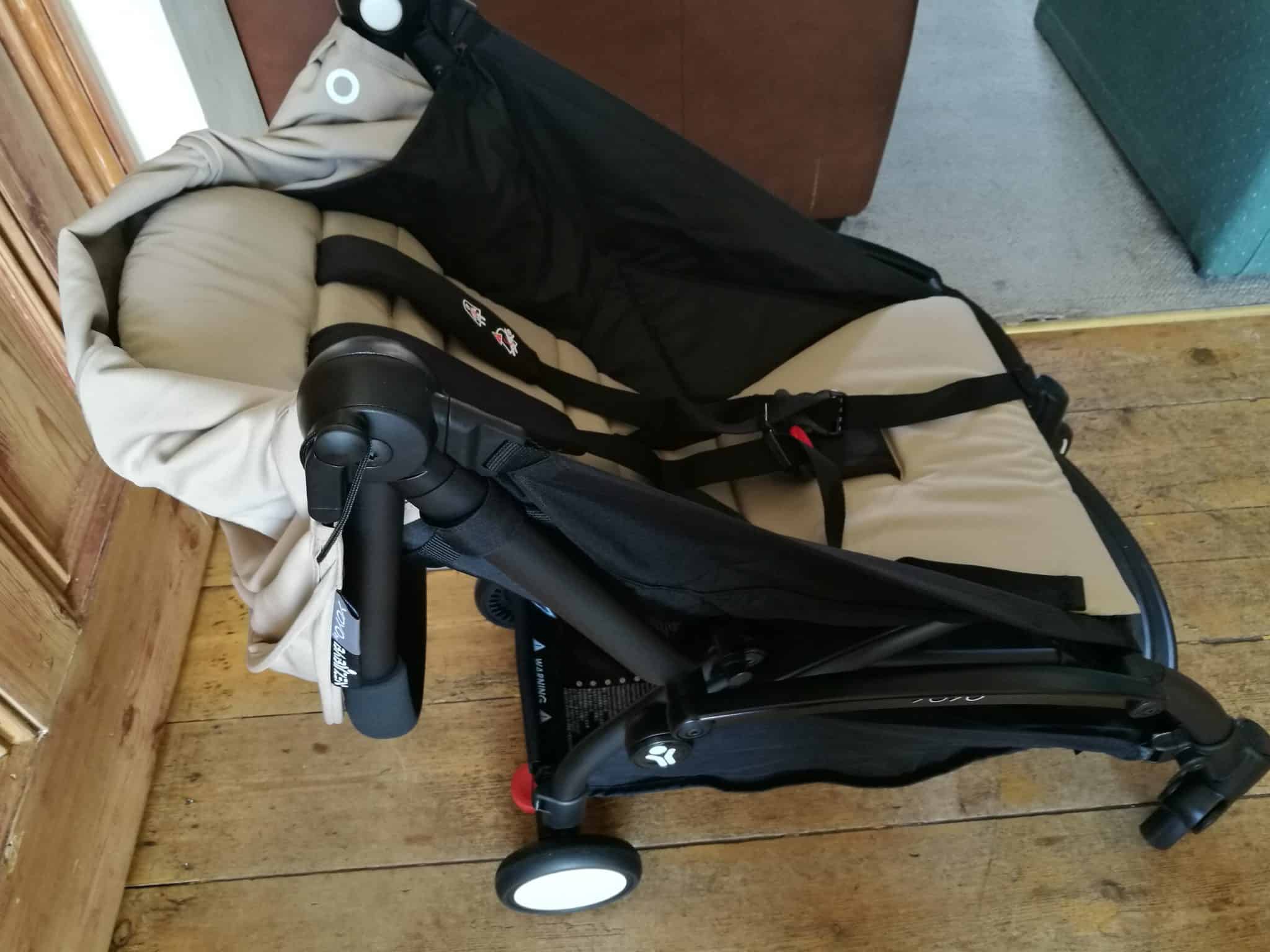 I have been through a few pushchairs so far. I started off with the Chicco Urban which was our pram and ended up being the first pushchair. I then went for the Mamas and Papas Armadillio Flip XT but it ended up not really being what I needed. My last pushchair was a Quinny Moodd and it was beautiful. Erin loved it from the minute she sat in it. However, the super small basket and short handles meant it didn’t suit us at all. I had then been drooling over the Babyzen YoYo after a friend got one.

After a trip away to Cambridge and dealing with the Quinny, John and I realised we needed a lightweight stroller. Travelling with it on the train was horrendous and the thought of taking it on the tube in London made me want to cry. So, we bought the Babyzen YoYo. 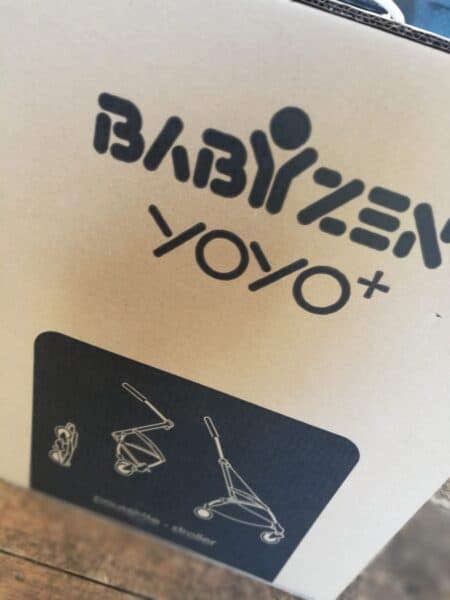 When the Babyzen YoYo arrived I was actually away and I had to wait to until I got back. I was so excited! Up until this point, John had put together the pram and other pushchairs. This one though, I did on my own.

It did help that I had a YouTube video running but all in all, it took me about 20 minutes from opening the box. I think the trickiest part of putting this together was threading the wire through the sun canopy. This really wasn’t difficult though, which just goes to show how easy it is to put together.

The wonderful thing about the Babyzen YoYo is how many safety features there are. As you can see from the pictures below, the fabrics and seat are attached to the frame in many different places and they’re all super secure. There is also a 5 point harness to keep your child in the seat. I absolutely love the 5 point harness because there is no way of Erin getting out of it/ pushing the button to open it.

There are plenty of different colour options available but I’m not one to go for anything too girly so I chose a lovely sand colour pack.

Erin is currently 18 months old and we’ve been using the Babyzen YoYo for a good few months now. The seat is plenty spacious for Erin and there is still a lot of growing room for her. The seat can be reclined from the back but I never use this feature. Erin can quite happily sleep sat in the seat as normal and she never sleeps for too long in the pushchair anyway.

One of my issues with our Quinny Moodd was that the sun canopy was not big enough. That’s definitely not the case here. The hood comes down well over Erin’s head and not once has she been annoyed by the sun getting in her eyes. The back of the hood has a really handy pocket with a zip and I love this feature. I like to have my house keys and phone handy and they fit nicely in this pocket. I don’t have to go routing through the changing bag and the zip keeps them out of site and hard to get to for other people. 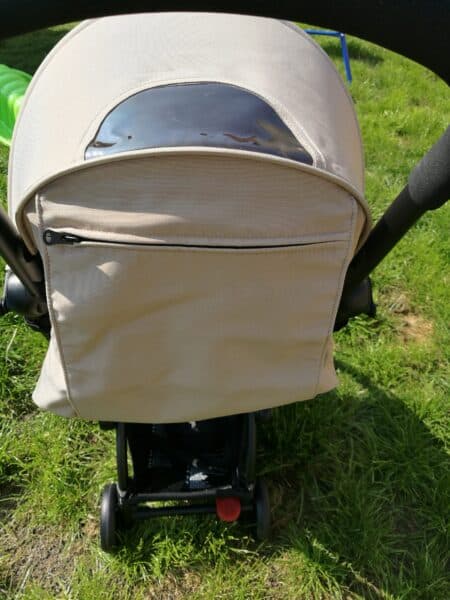 My only real annoyance with this stroller is the basket. While it is a lot larger than that of the Quinny Moodd, there are bars going across it, making it hard to access at times. I don’t drive so I have to take this into supermarkets and do a shop. I have found that I can’t fit some things, like large cereal boxes in the basket because of these bars.

One of the reasons for us buying the Babyzen YoYo was the small fold. Although we don’t drive, we do travel quite a lot on trains and stay in hotels. We needed something that wouldn’t take up much space and also something that was easy to fold.

To fold the Babyzen YoYo first you need to push the white button on the side of the hood. This folds the hood backwards as you can see above. Next, make sure the front wheels face forwards and then pull a little lever underneath the seat. The whole stroller then folds easily and can be done with one hand! The stroller has a carry handle which means you can go don’t need to worry about not having your hands free if you need to fold it. The Babyzen YoYo also comes with a bag which protects it while you’re traveling.

The Babyzen YoYo is not an all terrain stroller so don’t expect it to cope amazingly well on grounds like gravel. However, using the stroller in the regular way, on pavements etc. it is fantastic. I live in a town where the pavements are really narrow and not the best quality. I have had no problems whatsoever getting around and this stroller fits everywhere!

The Babyzen YoYo is not a cheap stroller but it is worth every penny. It can also be taken on a plane as hand luggage so no need to worry about it getting damaged. We’ll be testing this out when we go abroad in April.

So far, the Babyzen YoYo is my favourite of everything we’ve had. However, I would still love a bigger pushchair for longer day trips so Erin has that bit of additional comfort. 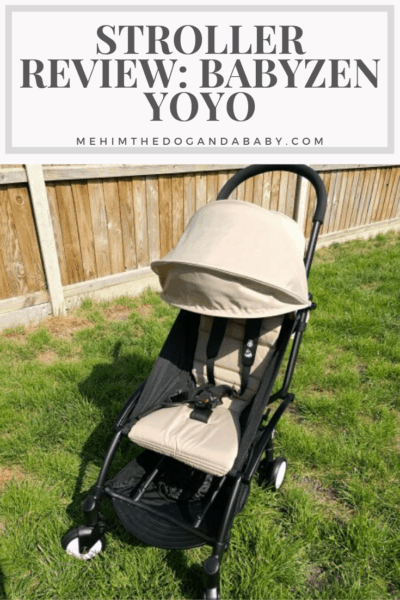