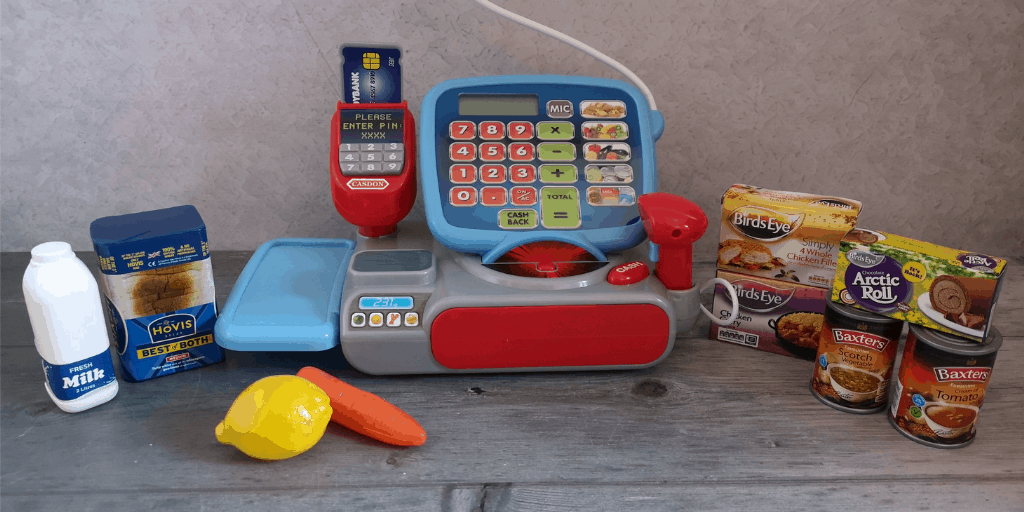 For quite some time now Erin has loved to play shops. I don’t know what got her so interested but she would happily make her own shop out of chairs and a blanket at any chance she gets. Erin has a great imagination and can create a shop in her head but I knew that she would prefer to have something real to play with.

Casdon are a brand who specialise in role play style toys, some of which are replicas of actual products that are used around the house or from realistic situations. From experience, we have found that Erin learns best from real situations and likes things to be as realistic as possible. To help her create her own shop, we have been trialling the Casdon Supermarket Till.

Before the till can be played with there is a little bit of set up that needs to be done. To start with, the till needs 3xAA batteries. You can use it without this but some of the functions won’t work. The till has some stickers that need placing, play food that needs putting together and money that needs separating. Set up only took around 5-10 minutes which is a good thing especially if you have an impatient toddler. 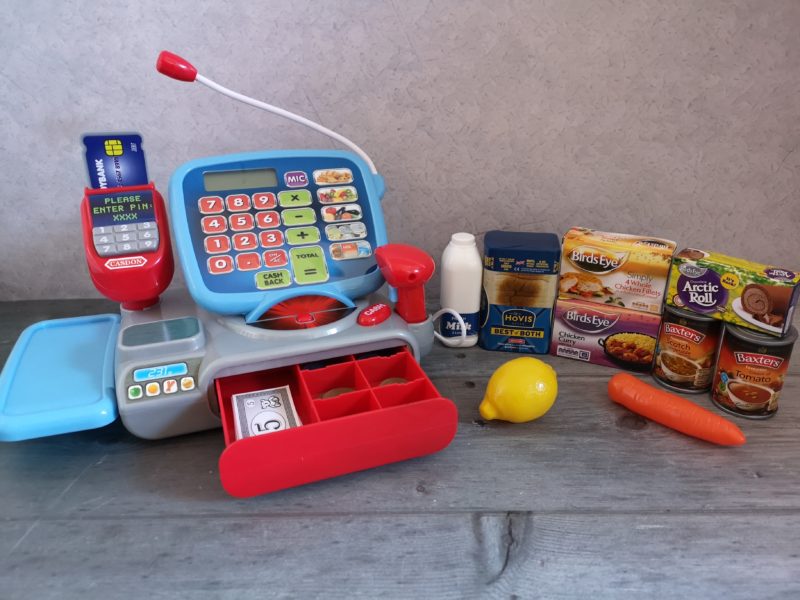 The Casdon Supermarket Till comes with some lovely features which make it more like a real till. I liked the fact that along with notes and coins the set comes with a payment card. I think a lot of play tills miss this out and as many of us use cards more often than not, it’s an important thing to include. he set also has a scanner, working microphone, touch sensitive screen and a working calculator! 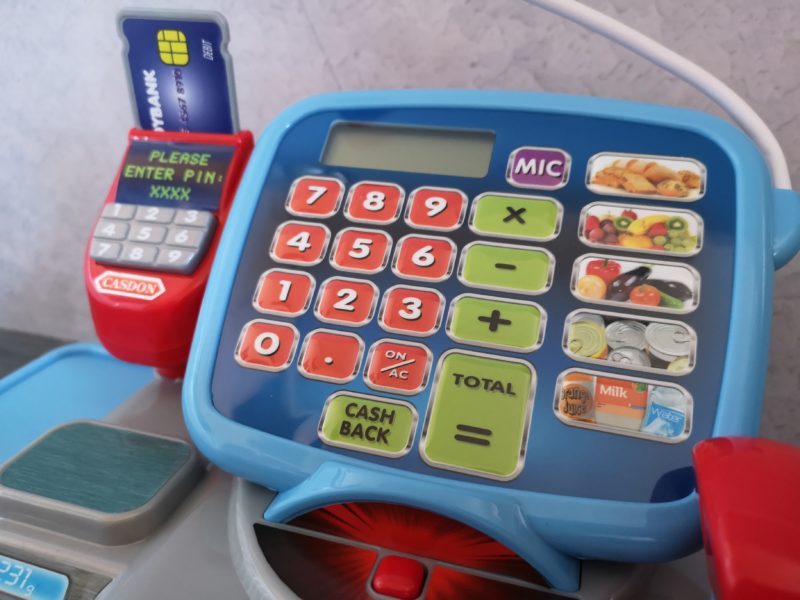 Unfortunately, when it comes to the play food that comes with the tills it falls a little bit short. The amount of food included isn’t a problem as you can buy bigger packs separately if you want to. However, anyone who has small children will know that cardboard boxes of food will last a very short amount of time. Erin isn’t a particularly heavy handed 3 year old but she leaves things around, steps on them or forgets about them and things like this are likely to get ruined quickly because of that. 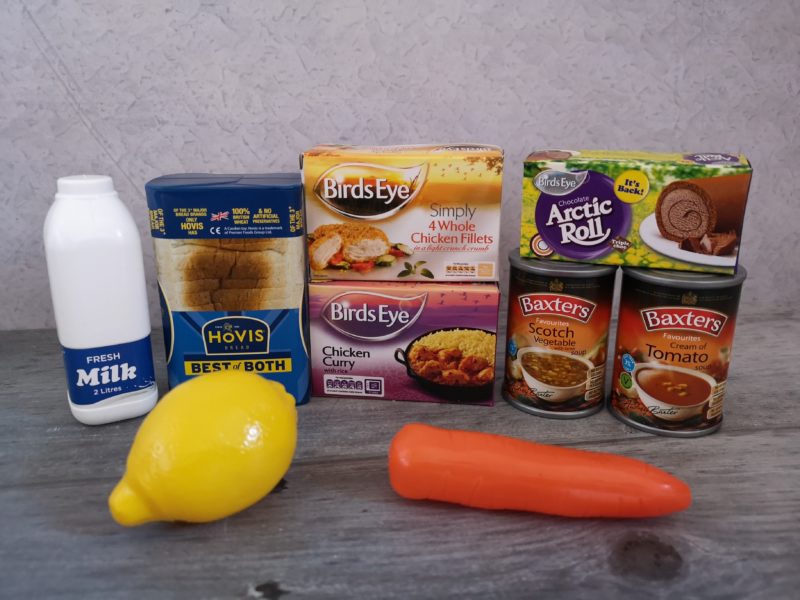 Something I really appreciated was the large money drawer. I have seen other tills that are barely able to close once you get 1 or 2 coins in the drawer. The Casdon Supermarket Till has plenty of space for notes on one side and then 6 deep compartments for coins. You can fit all of the money included with the set inside and more if you wanted to. 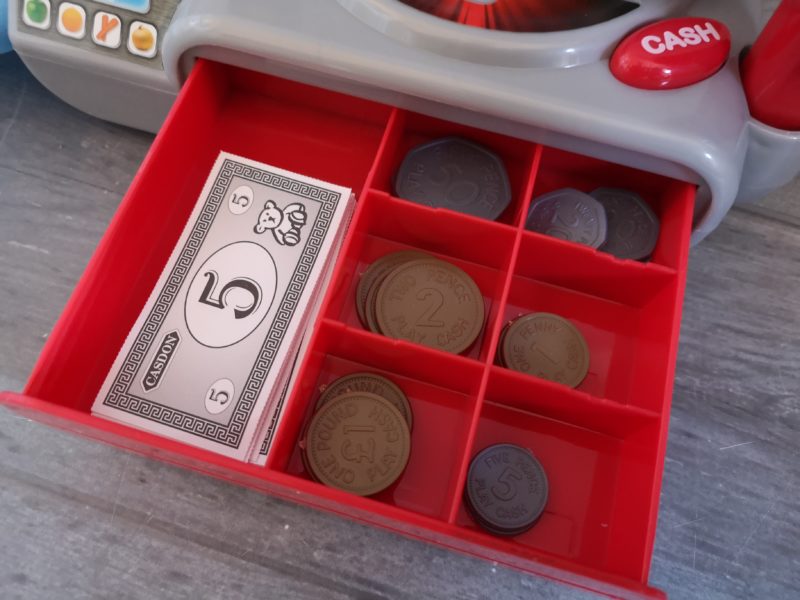 As soon as I got this out for Erin to play with she was instantly interested in the bits on the till that she hadn’t seen before. The majority of play tills will have basic features but we haven’t had one yet with the card slot, microphone and a scanner!

It only took a few seconds for Erin to boss John around and to ask him to pass her the different foods to scan. Instead of being able to scan the food while it sits on the blue shelf Erin has to pick each piece up and then move it elsewhere. I assume the scanner lead is only the length it is for safety reasons so I have no issues with this. Erin got a little bit annoyed to begin with but she soon found her own way of doing things. 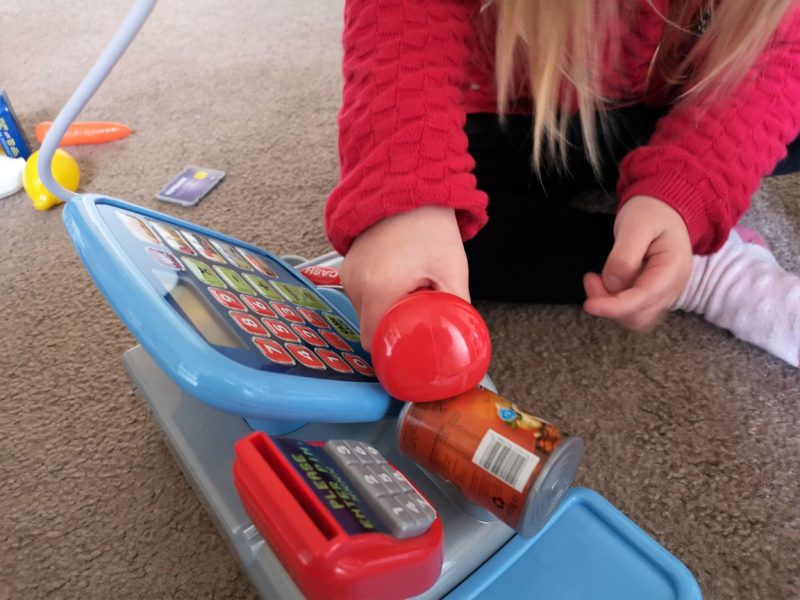 The size of the till really helped Erin to play nicely with this till. Instead of having a really small space for the coins and the notes, Erin could place everything back in the till drawer nicely without getting frustrated because it didn’t fit or it didn’t close. There is also enough money in the set that Erin was happy to let John have some for himself rather than keep it all for herself! 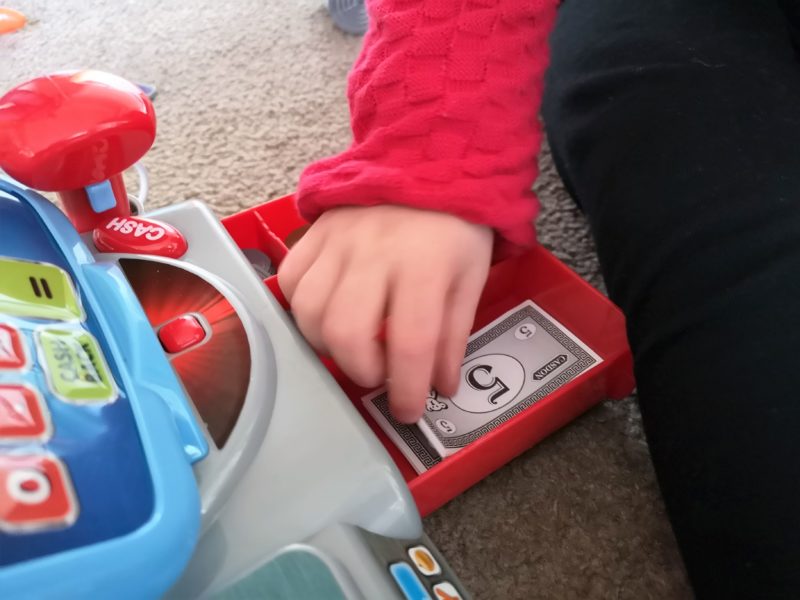 Erin has had so much fun with the Casdon Supermarket Till already and with the addition of some extra food that we already had at home, we can turn play time into a fun shopping experience!

The Casdon Supermarket Till can be purchased on Amazon here: https://amzn.to/2DJAusJ 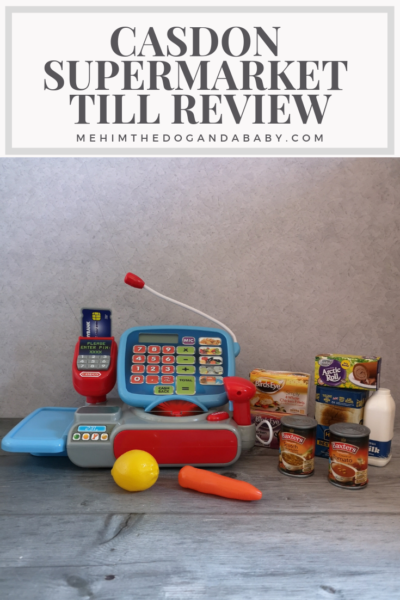 1 thought on “Casdon Supermarket Till Review”