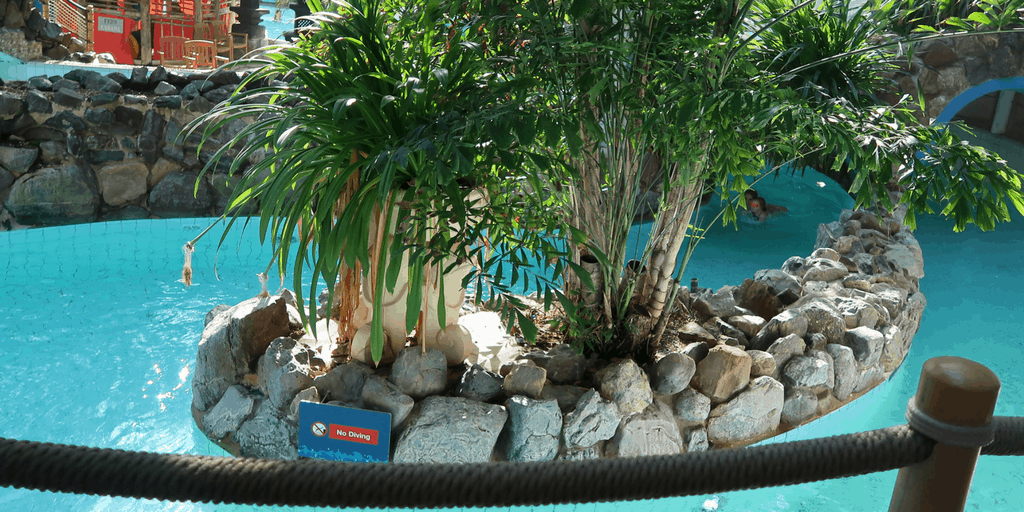 Swimming is one of the only free activities to do at Center Parcs and if you’re looking for a holiday on a budget, this is something you really need to make the most of! The Subtropical Swimming Paradise can be found in the Sports Plaza which is right in the middle of Center Parcs Elveden Forest. This was only a 15 minute walk from our lodge and I think roughly a 30 minute walk from the lodges which were further away. Still, this isn’t a long walk and it can be made a lot easier and quicker if you have hired bikes or brought them with you.

Pushchairs are not allowed in the changing rooms but there is a pushchair park just outside. Here, you can either leave the pushchairs as they are or lock them up if you have a lock with you. We didn’t bother locking ours up and we went swimming every day and it was completely fine. Inside the changing rooms there are family sized cubicles as well as singular cubicles. However, the family changing rooms are always in demand and we had to queue up for one of these each time we went swimming. The wait wasn’t too long but if you have small children, you know this may take a while, especially after a swim!

Lockers are provided in the Subtropical Swimming Paradise and are free of charge. Each locker can be locked with your waterproof wristband so this is absolutely perfect for a swimming trip! If you somehow manage to forget which locker you have, like we did many times, there are little machines dotted around that will let you check your locker number! Thank god for these!

Elveden’s Subtropical Swimming Paradise is pretty big but not as big as some of the other Center Parcs locations. Don’t let that put you off though because there is so much to do.

To start with, as you enter you will see the main pool and it is huge! There is also a first aid point and information desk as well as loads of safety vests to borrow if you have children with you. Be warned though, these are suitable for 2 years plus so if you have smaller children I’d advise taking something for them. 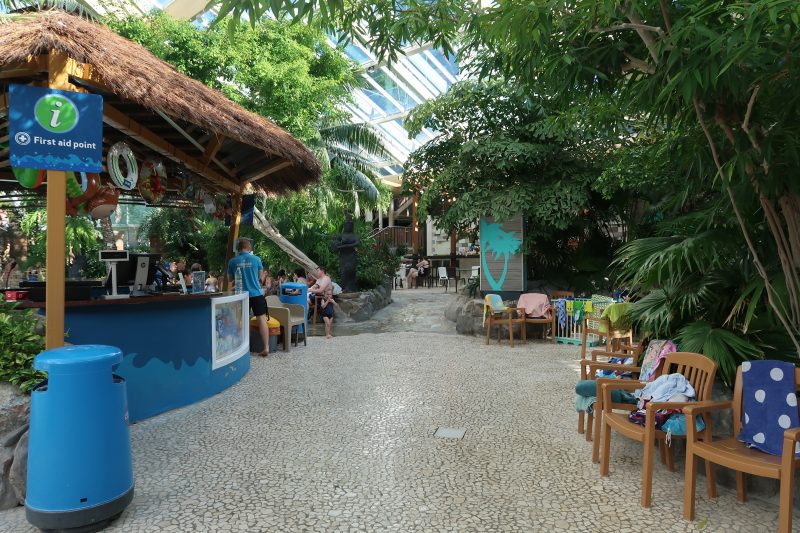 Erin loved the wave pool which is located in the main pool. Every so often the wave machine would be turned on and Erin was amazed. She wanted to get right in there with the big waves though and didn’t understand why she couldn’t. The main pool also has the ‘lazy river’ which pulls you along at a lovely pace and has bubble machines under the water. Obviously, Erin wanted to do this over and over and over again but it was so much fun so we didn’t mind.

The main pool does get quite busy because it is shallow at the beginning and it is a great place for smaller children and families. Still, there was not one time where we felt like it was overcrowded and we were able to swim around with ease on each visit.

The Subtropical Swimming Paradise has loads of other things to do as well and these surround the main pool. Cabanas can be hired, you can get a Starbucks and you can also have a meal, all without leaving the area! There are loads of seats around too where you can leave a towel or other items but obviously, anything left is done so at your own risk. I think it would be just as easy to go and get some cash etc. from your locker and come back rather than leave your things unattended.

What I loved the most was just how amazing the children’s area is. This is called Venture Cove and can be found around to the left of the main pool. There is an area for small children with things to play with and 2 slides, there are floor fountains and a huge play area with a much bigger slide and waterfall like water features. I was so impressed! There are cots for babies and children dotted around too which I thought was really a great thing to be thought of. Unfortunately, I can’t post too many photos as there are other people’s children in most of them but here is an idea of Venture Cove. As you can see, it’s very pirate/ boat themed and I thought the whole thing was well thought out and super fun for children.

Other features at the Subtropical Swimming Paradise are hot whirlpools, white water rapids, an outdoor pool and a fantastic lagoon pool, just to name a few things! Unfortunately, during our visits the whirlpools were either all full every time I checked or a few of them were broken and not working which was a real shame. The lagoon pool was wonderful though and really quite magical. There is space to sit all around the edges while still being in the water. I personally didn’t go on any of the slides because I’m a wuss but there is a large flume, small flume and also something called the Cyclone!

I think the Subtropical Swimming Paradise is one of the best things about Center Parcs and it’s something I’d use more the next time we go. Erin loves swimming and she never wanted to get out of the pool, mostly ending in tears! 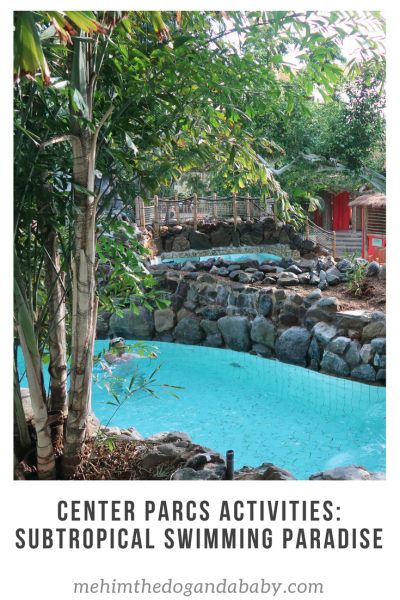