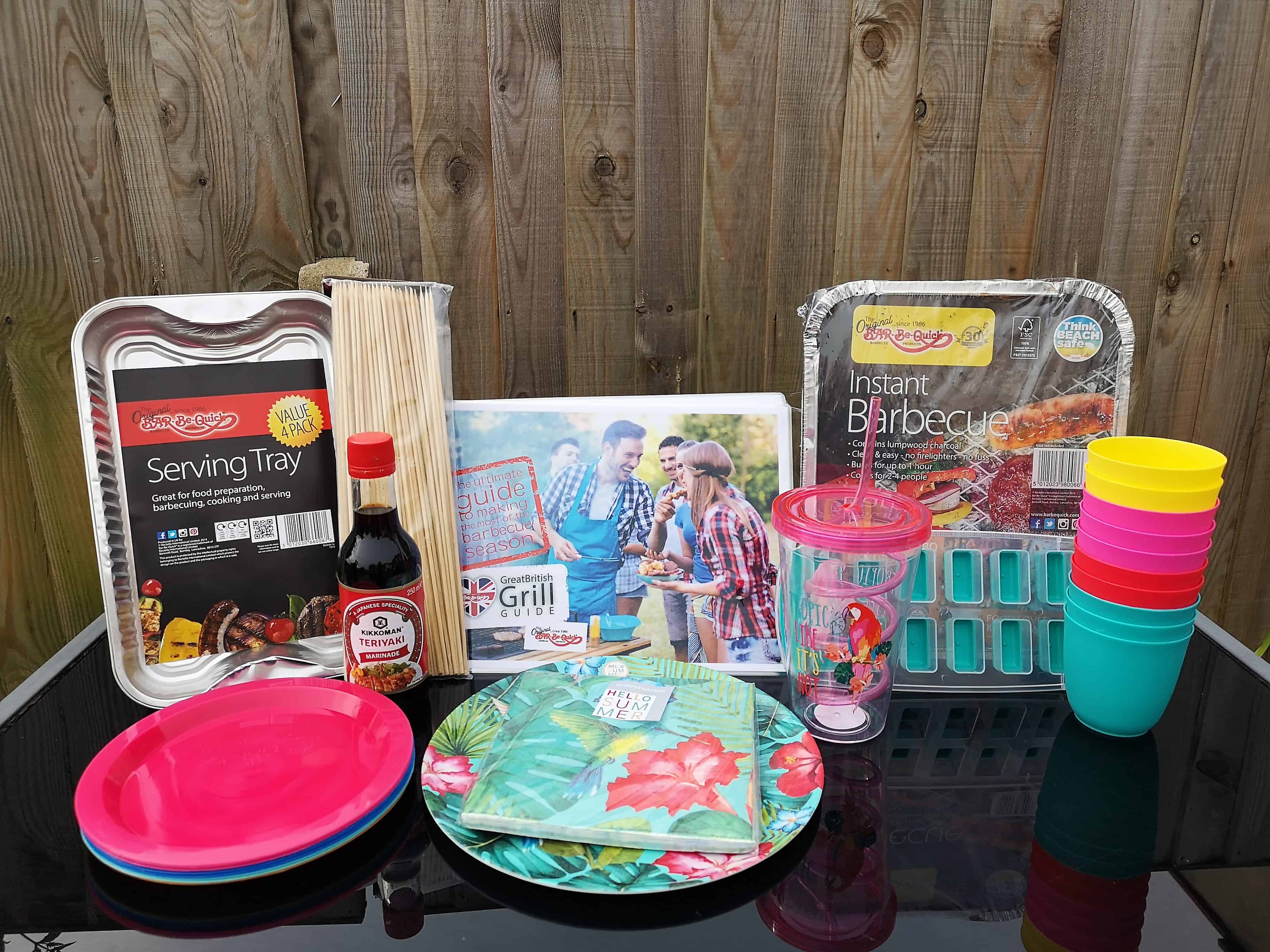 Last weekend we finally had some really nice weather and I wanted to take the opportunity to get out in the garden and have some fun. I’m not sure why but we haven’t had a family barbecue for a few years now and I think the last one was when Erin was about 6 months old. I’ll be honest here and say the idea stressed me out a little bit. As we have the largest garden our house is the place where everyone comes but a crazy toddler and a big barbecue was not my idea of fun. A few weeks ago we were kindly sent a lovely package from Home Bargains and Bar-Be-Quick along with a super handy grill guide so I thought it was about time to try the whole barbecue thing again. 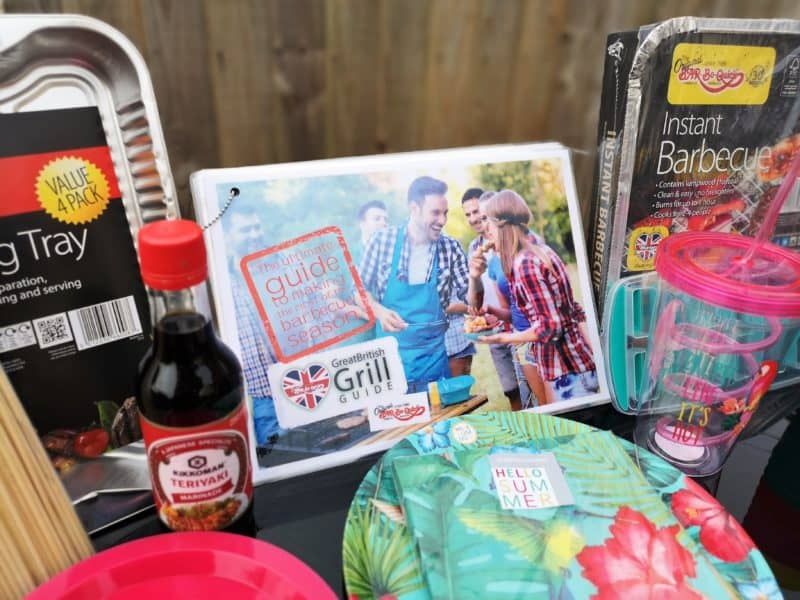 We do actually have a big-ish barbecue in the shed but last time we used it we did it wrong, smoked out the whole garden and ended up cooking in the kitchen instead. I think the barbecue is now buried under firewood and no one wanted to dig it out. One of the items from Bar-Be-Quick was an instant barbecue so we thought we’d try cooking with this instead. With the instant barbecue you get around an hour of cooking time after the initial lighting and resting for around 20 minutes. To make sure our instant barbecue was safe we kept it way out of the way of Erin and also on bricks to make sure it was off the floor and ventilated.

My sister and her boyfriend who came over for the day are vegetarians so cooking food separately is important for us. The instant barbecues mean that we can cook meat and non-meat items on different trays so that there’s no chance of any contamination. The great thing about the instant barbecues too is that there’s no cleaning up afterwards and they can be thrown away when they’re safely cooled down. 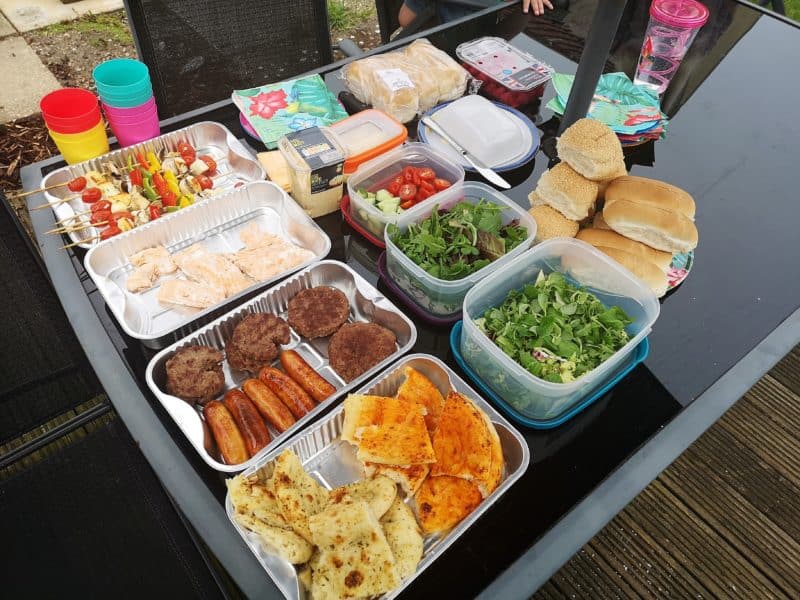 As we were cooking different things where some was ready before others, the foil serving trays came in really handy. Not only did this keep the meat and non-meat items separate but it also made it really easy to pass food around the table when someone wanted something. Erin really liked being able to choose her own food and this way she could help herself to whatever she wanted. She especially liked the vegetable skewers (from Bar-Be-Quick) and really enjoyed trying the new foods that we put on there for her. 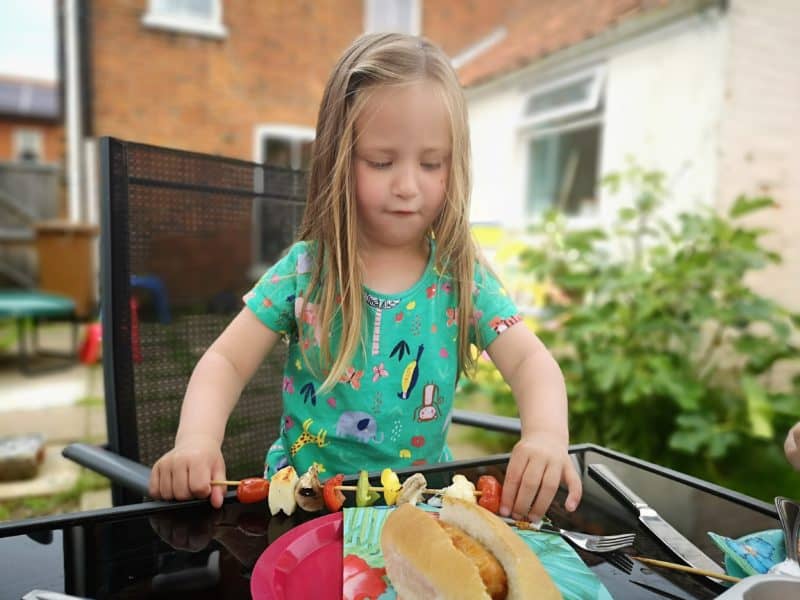 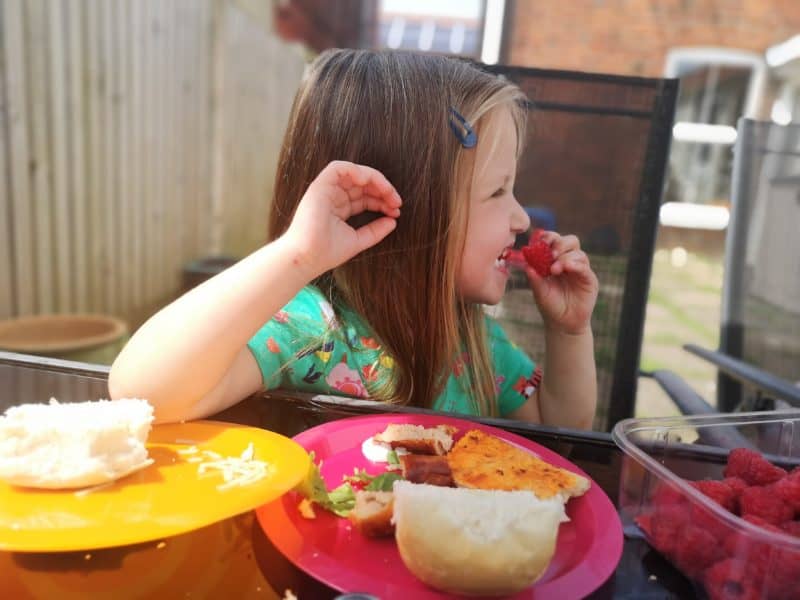 Of course, you can’t eat barbecue food out of trays (well, you can if you like) so Home Bargains provided us with a set of summer plates, napkins and also a set of cups. We had enough for the whole family and some extras for when Erin decided she needed more than one. The colours are so bright and cheery so even if the weather isn’t exactly on your side these will be sure to add some sunshine to your table. 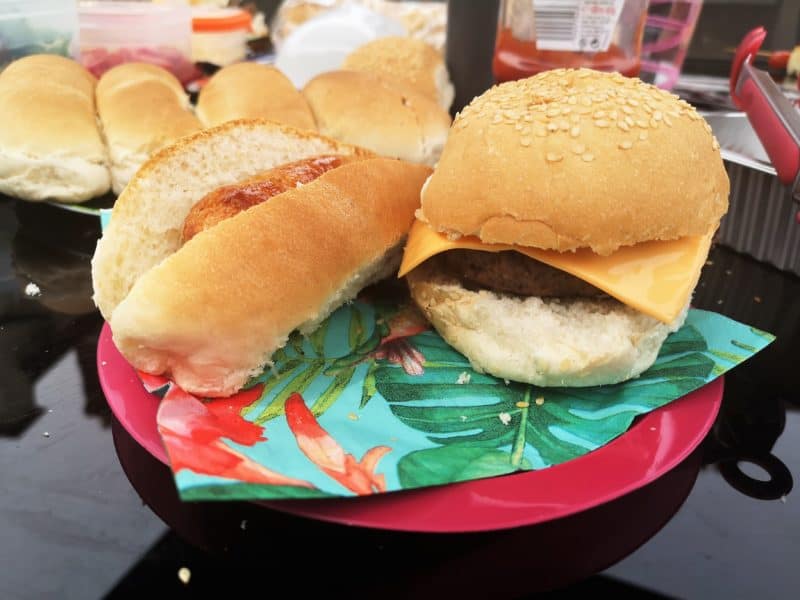 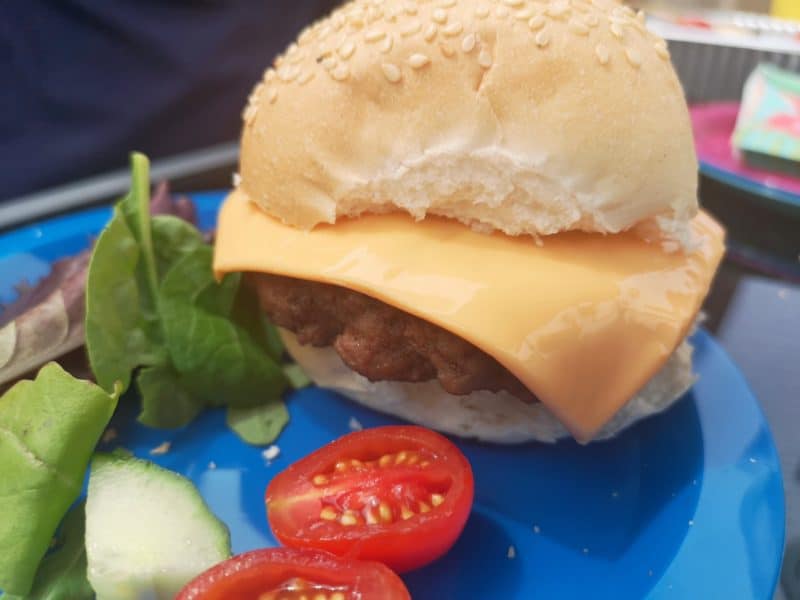 Home Bargains and Bar-Be-Quick really helped us to have such a fun time together a family and all of the items except for the instant barbecue and serving trays, are items we can use again for the next time. Since the barbecue we have used the plates on a daily basis for Erin and she is a bit obsessed with the ‘Hello Summer Spiral Straw Cup’ from Home Bargains. 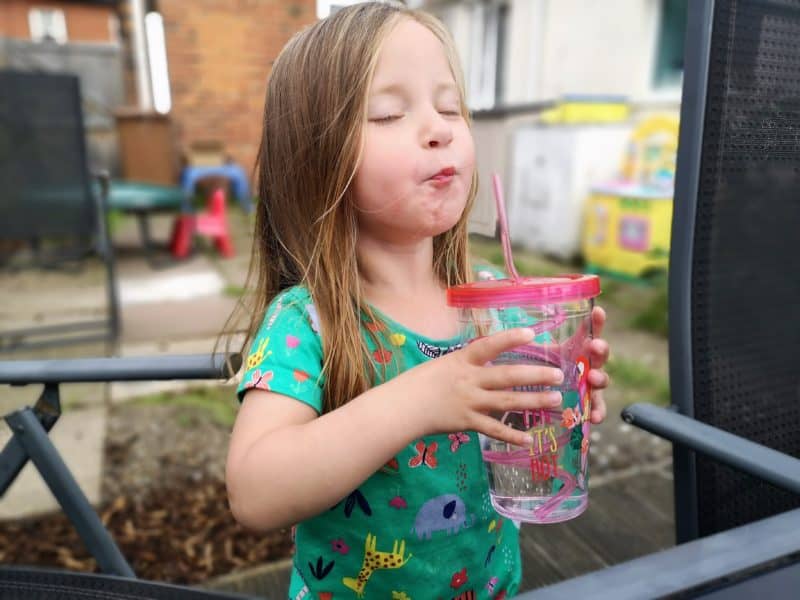 None of the items we were sent were very expensive so if you’re a family on a budget, there are plenty of options. Bar-Be-Quick’s instant barbecue cost £3 while the serving trays (pack of 4) were the most expensive item at £3.50. The items from Home Bargains (plates, cups, napkins etc.) came to just over £6 and most of them can be used over and over again so they’re great value for money. 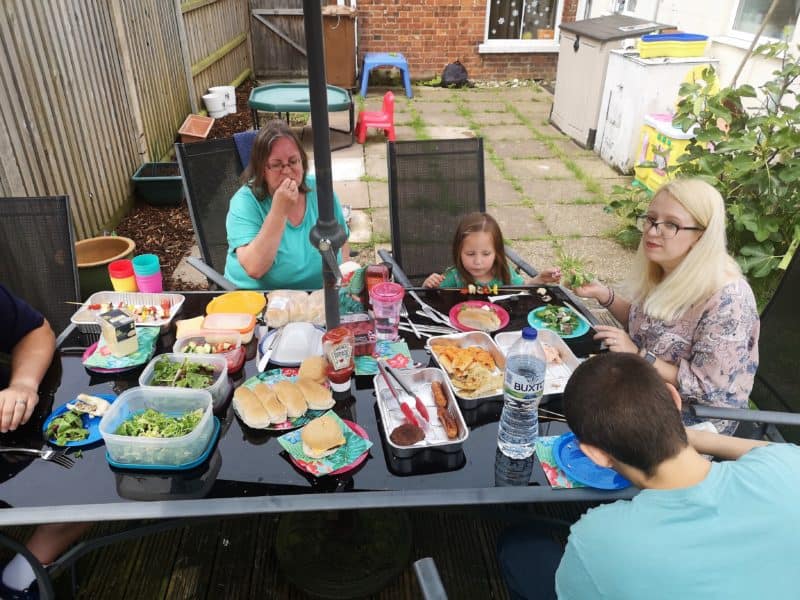 For just over £15 you can have all of the items (minus the food) that you need to get yourself equipped for a really fun day with the family.

You can download Bar-Be-Quick’s grill guide for free here. 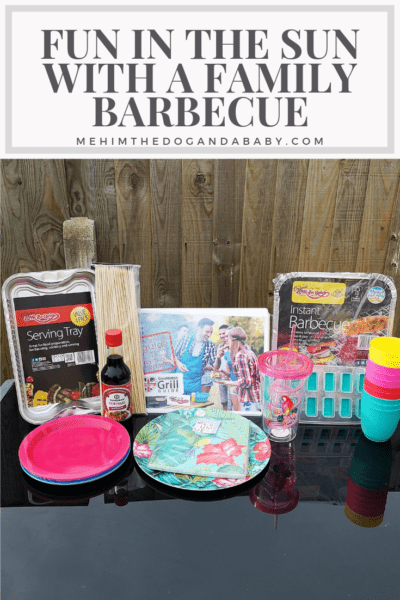 5 thoughts on “Fun In The Sun With A Family Barbecue”